Accessibility links
Smithfield Says Pork Won't Change, But Some Aren't Buying It Worried about the impact on U.S. consumers, farmers and even taxpayers, some senators expressed qualms about the intentions of Shuanghui International Holdings, a Chinese firm that is buying Smithfield Foods. 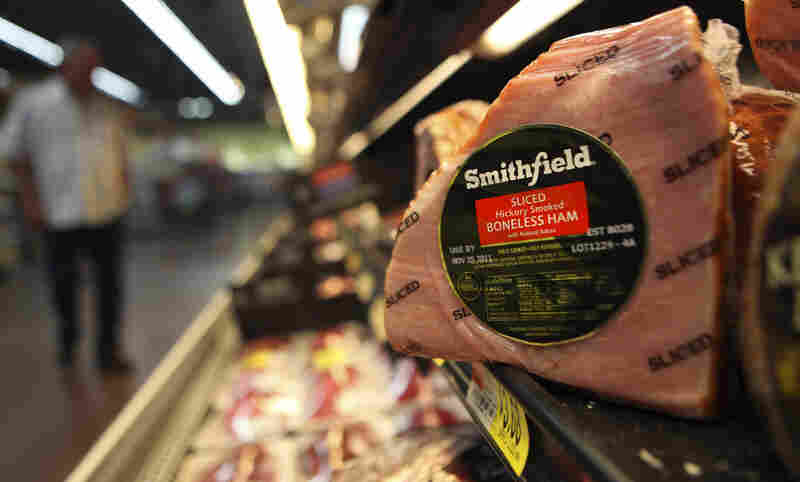 A Smithfield ham at a grocery store in Richardson, Texas, in 2011. Some senators expressed qualms Wednesday about the intentions of Shuanghui International Holdings, which is buying Smithfield Foods. LM Otero/AP hide caption 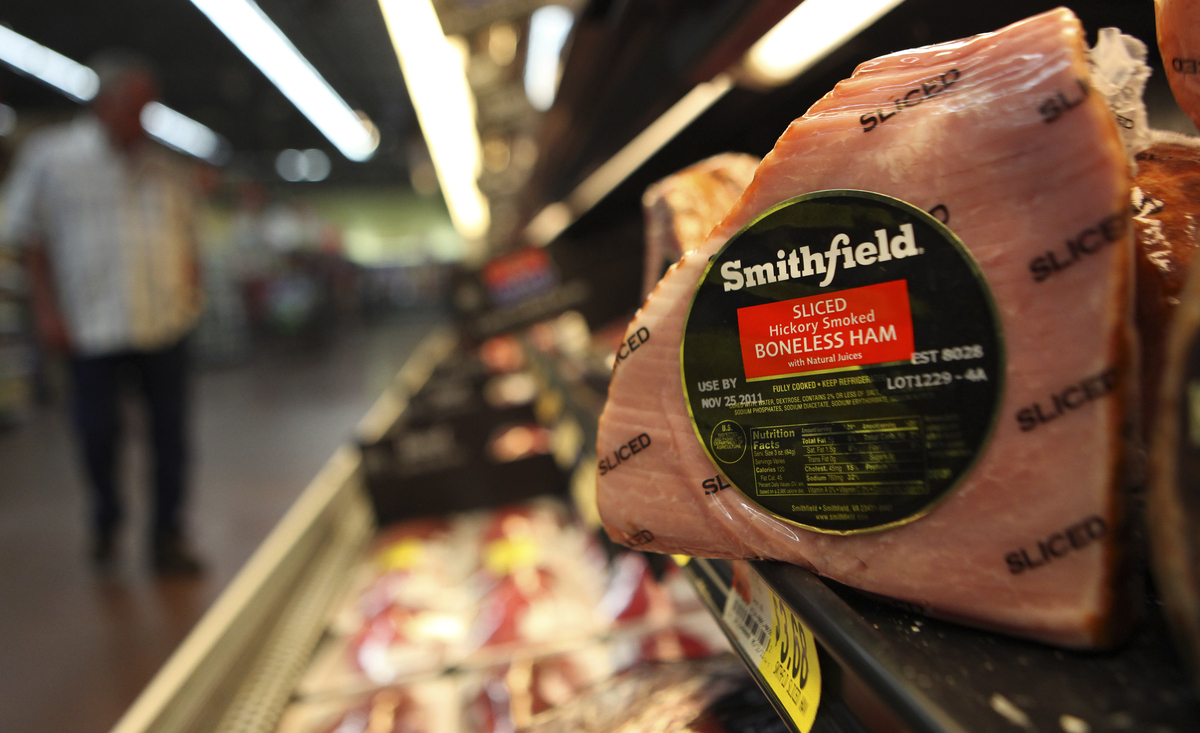 A Smithfield ham at a grocery store in Richardson, Texas, in 2011. Some senators expressed qualms Wednesday about the intentions of Shuanghui International Holdings, which is buying Smithfield Foods.

Americans will get the same ham slabs and bacon slices they have enjoyed for generations, even after Smithfield Foods becomes a Chinese subsidiary, Smithfield CEO Larry Pope told Congress on Wednesday.

"It will be the same old Smithfield, only better," Pope said at a Senate Agriculture Committee hearing.

From 'Morning Edition': John Ydstie Reports On The Smithfield Hearing

Worried about the impact on the U.S. consumer, farmer and even the taxpayer, they expressed qualms about Chinese intentions.

"Is Shuanghui focused on acquiring Smithfield's technology, which was developed with considerable assistance by U.S. taxpayers?" asked Debbie Stabenow, the Michigan Democrat who chairs the Senate committee.

Those technologies include certain genetic strains of hogs, manure-management systems and meat-processing equipment.

"Can we expect that after the company has adopted Smithfield's technology and practices, they will increase exports to Japan, our largest export market, in competition with U.S. products?" she asked.

Throughout the 90-minute examination of the $4.7 billion deal, Stabenow peppered the pork executive with questions about:

- Fairness. "Can we really expect increased access for our pork products in China?"

- Consumers. "Will we see volatility in prices?"

- Precedent. "One pork company alone might not be enough to affect our national security, but it's our job to be thinking about the big picture."

The sharpest exchanges involved the fairness issue, with both Democrats and Republicans wondering whether U.S. companies would be free to purchase a major food producer in China.

Then an expert, Usha Haley, director of West Virginia University's Robbins Center for Global Business and Strategy, answered. "No, it wouldn't happen," she said. Pork is "a strategically important industry for China."

The deal is being reviewed by the Committee on Foreign Investment in the United States, known as CFIUS, which monitors and reviews foreign investments.

Pope deflected Stabenow's questions with upbeat assessments. Having Shuanghui purchase Virginia-based Smithfield would "provide enormous benefits for our two companies," he said. "It is a partnership that is all about growth."

For one thing, the transaction would generate a windfall for Smithfield shareholders. Pope said Shuanghui is offering $34 per share in cash, a 31 percent premium over the company's closing stock price on May 28, the last trading day before the deal was announced.

The transaction will indeed provide "short-term benefits to Smithfield's managers, shareholders and pension funds," Haley said. "However, the medium- and long-term benefits to U.S. consumers, industry and society are highly questionable."

"Shuanghui apologized in March 2011 over illegal additives found in its meat and halted output after a CCTV report that farmers in Henan province fed the additive to their pigs and then sold them to a Shuanghui slaughterhouse," Haley said.

But Pope said nothing will change in this country. Shuanghui "is committed to maintaining Smithfield's operation, staff and management," he said.

Another witness stuck up for Pope's viewpoint. "There is nothing inherently worrisome or unusual" about the deal with Shuanghui, said Matthew Slaughter, a professor at the Dartmouth business school.

Smithfield, founded in 1936, has 46,000 U.S. workers, more than half of whom belong to the United Food and Commercial Workers union.

He said the transaction would "drive growth ... for the entire U.S. pork industry" because China has a rapidly growing middle class.

For the Chinese, pork is the No. 1 source of protein, while in this country, it's only No. 3 and "pork demand in the U.S. has been declining for almost 15 years," he said.