Accessibility links
Scalia V. Ginsburg: Supreme Court Sparring, Put To Music Justices Antonin Scalia and Ruth Bader Ginsburg have been friends for decades, but they're known for their differences when it comes to constitutional interpretation. In those dramatic clashes, recent law school graduate Derrick Wang heard an opera. 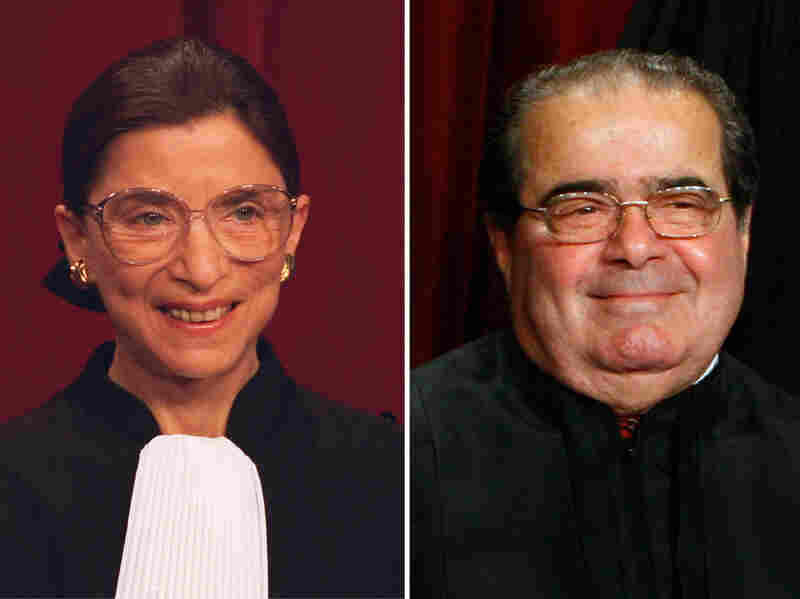 Justices Ruth Bader Ginsburg and Antonin Scalia have been friends for decades, but they're known for their differences in constitutional interpretation. Charles Dharapak/AP (left) /AP hide caption 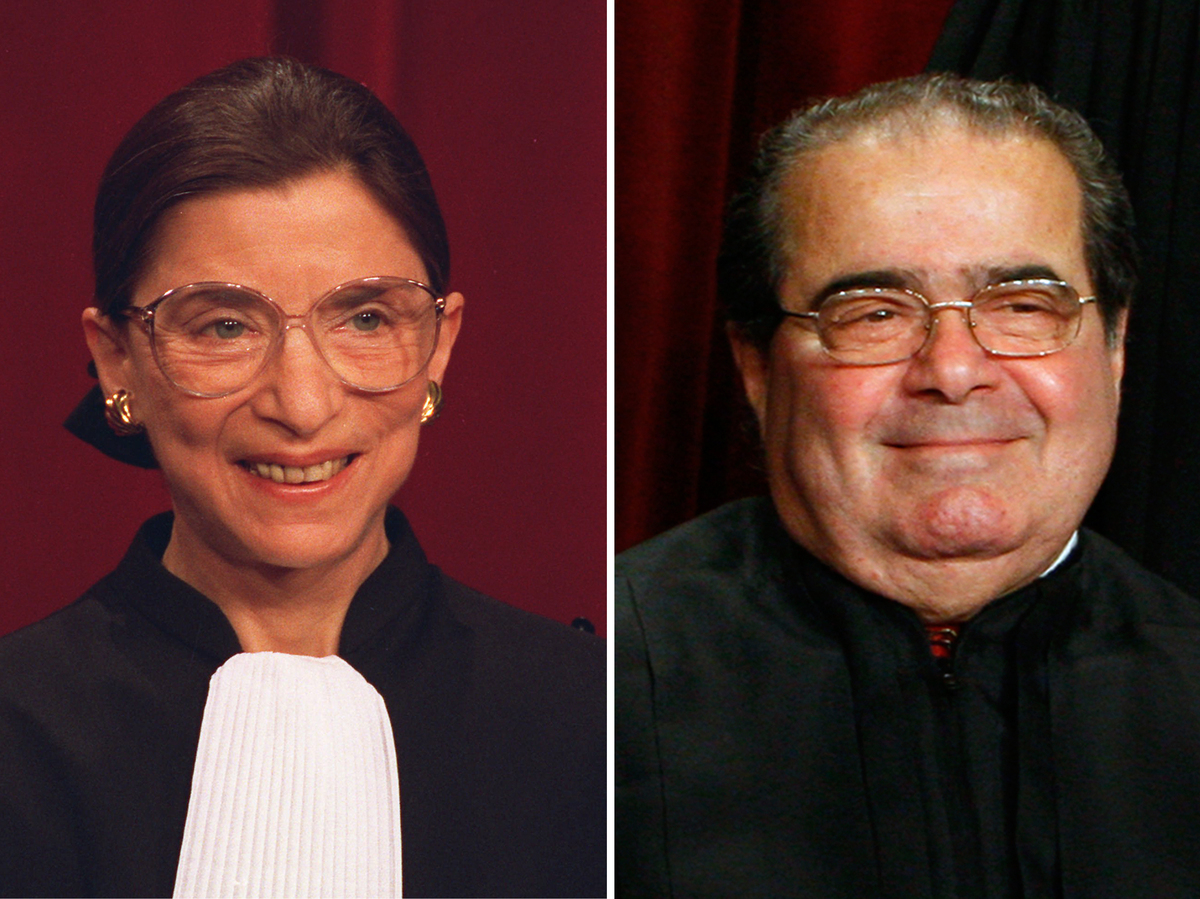 Justices Ruth Bader Ginsburg and Antonin Scalia have been friends for decades, but they're known for their differences in constitutional interpretation.

On the day after the Supreme Court concluded its epic term in June, two of the supreme judicial antagonists, Justice Antonin Scalia and Justice Ruth Bader Ginsburg, met over a mutual love: opera.

When it comes to constitutional interpretation, the conservative Scalia and the liberal Ginsburg are leaders of the court's two opposing wings. To make matters yet more interesting, the two have been friends for decades, since long before Scalia was named to the court by President Reagan and Ginsburg by President Clinton.

Ginsburg likes Scalia because he makes her laugh; Scalia likes Ginsburg because she laughs at his jokes; and the two love to spar over ideas. What unites them, though, is opera.

Enter Derrick Wang, a talented musician who has just graduated from the University of Maryland's Carey School of Law.

Wang is composing an opera entitled Scalia/Ginsburg, based on the justices' own words and using musical themes and styles of other composers from Verdi to Puccini and Bizet. The University of Maryland plans to premiere excerpts this fall, and it will get a partial airing next spring from the Washington National Opera and its young artists program.

In the meantime, at the Supreme Court, Scalia and Ginsburg got a preview in the East Conference Room on June 27 with a small audience of law clerks and staff on hand.

The germ of Wang's idea came as he was plowing through Supreme Court legal opinions in law school, including Scalia's dissents. 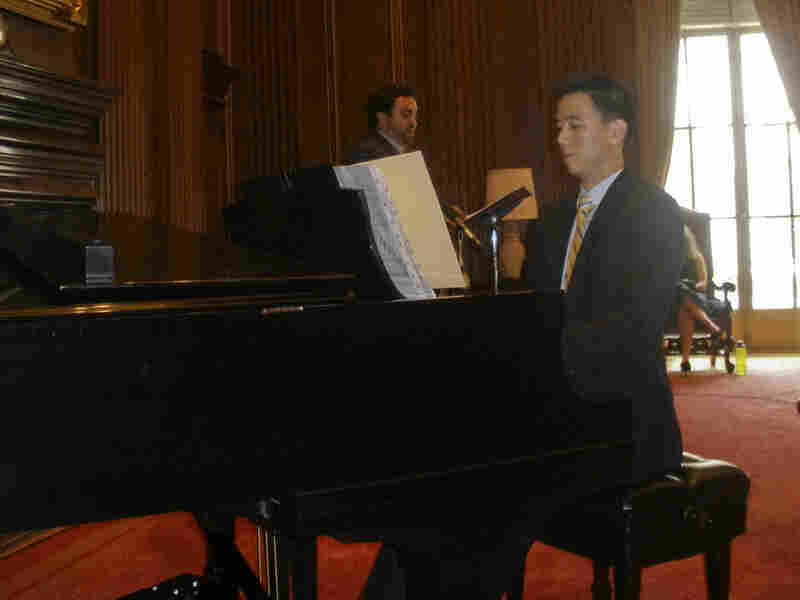 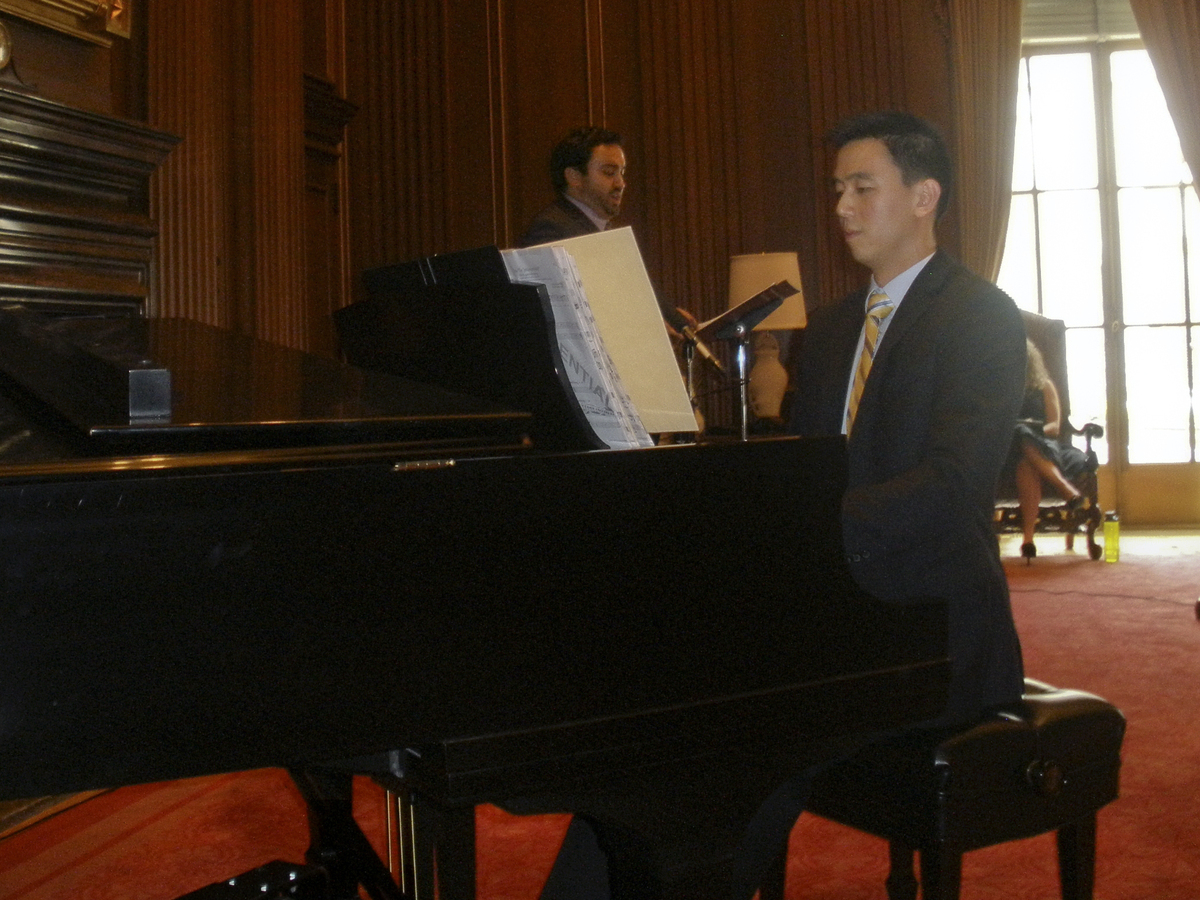 "I realized this is the most dramatic thing I've ever read in law school ... and I started to hear music — a rage aria about the Constitution," Wang said. "And then, in the midst of this roiling rhetoric, counterpoint, as Justice Ginsburg's words appeared to me — a beacon of lyricism with a steely strength and a fervent conviction all their own. And I said to myself, 'This is an opera.' "

He wrote to the justices to ask if he could put their words to music. Scalia and Ginsburg quickly responded that Wang did not need their permission, in view of the First Amendment. But he got their blessing anyway.

So, an opera was born, based on the two justices' personalities — Scalia's, bombastic, and Ginsburg's, demure — and their ideological disagreements. Like all births, this one had a midwife: opera lover and Maryland adjunct law professor Mike Walker, who was "blown away" when Wang approached him about his composition. Walker has mentored the composer and the project ever since.

As the plot unfolds, the two justices find themselves locked in a room, and the only way out is to agree on a constitutional approach. A grumpy Scalia fulminates:

The justices are blind — how can they possibly spout this?

This right that they've enshrined — when did the document sprout this?

The Framers wrote and signed words that endured without this;

When Ginsburg enters, Scalia implores her, to strains of "The Star-Spangled Banner," asking why she can't seem to read the Constitution properly.

Oh, Ruth, can you read? You're aware of the text.

Yet so proudly you've failed to derive its true meaning.

Finally, he tells her there is no way he is changing his mind. He will fight on.

You will do well not to doubt this:

Since I have not resigned, I will proceed to shout this.

How many times must I tell you, dear Mister Justice Scalia,

You'd spare us such pain if you'd just entertain this idea.

You are searching in vain for a bright-line solution,

To a problem that isn't so easy to solve.

But the beautiful thing about our Constitution is that

Our Founders, of course, were men of great vision, she says, but their culture restricted how far they could go. So to us, they bequeathed the decision to allow certain meanings to flourish and grow.

We are freeing the people we used to hold captive, who deserve to be more than just servants or wives.

If we hadn't been willing to be so adaptive, can you honestly say we'd have led better lives?

In his finale, Scalia replies with characteristic flourish, on a soaring high note, followed by this harrumph: "Anyway, that's my view, and it happens to be correct."

After the performance, the two justices congratulated Wang and the two singers, both Peabody Conservatory graduates: tenor Peter Scott Drackley, who sang the Scalia role, and soprano Kimberly Christie, who sang the Ginsburg role.

As for Ginsburg, she just sighs.

"The truth is, if God could give me any talent in the world, I would be a great diva."

Instead, she is the court's diva, playing regularly opposite divo Antonin Scalia. Their run resumes on the first Monday in October, when the new term begins.