Accessibility links
Movie Review - 'Grown Ups 2' - Like Me! No Really, Like Me! Grown Ups 2, the latest from Hollywood's simmeringly hostile man-child, is a series of riffs, skits and sight gags without much — aside from a low-comedy fascination with excreta and flatulence — to string them together. 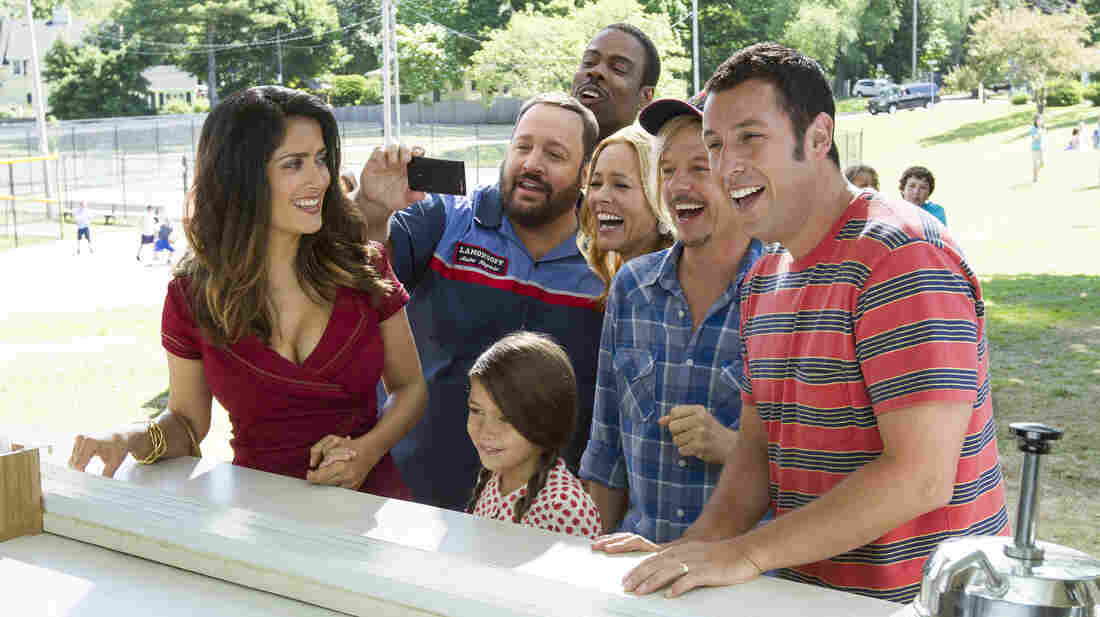 Improbably or not, Salma Hayek (left) and Adam Sandler (far right) are a couple again in Grown Ups 2. Billed as a comedy, the film also features Kevin James, Alexys Nicole Sanchez, Chris Rock, Maria Bello and David Spade, who in this scene are all pretending to laugh at something that in all likelihood involves poo. Tracy Bennett/Sony Pictures hide caption

Rated PG-13 for crude and suggestive content, language and some male rear nudity

Two decades ago, when stupid Hollywood comedies were relatively smart, they lampooned their own sequelitis with titles like Hot Shots! Part Deux. The genre has become less knowing since then, so the follow-up to 2010's Grown Ups is named simply Grown Ups 2.

Grown Ups Minus 2 would be more apt.

Like its predecessor, this is a vehicle for Adam Sandler, his pals and whatever they think they can get away with. That means some creepy sexual insinuations, if not so many as the first time.

But excreta and flatulence are the movie's two true fixations (with projectile vomiting running a strong third). Indeed the story opens with a sequence in which a large male deer urinates copiously on not one but two of the characters. It's a fitting introduction to the movie's tone.

Rob Schneider couldn't make it to the set for the second installment, it seems, but the other principals play the same roles as before. Sandler is Lenny, a Hollywood agent who's now relocated to the small Massachusetts town of his youth, supposedly because it's a more wholesome place for the three kids he's raising with wife Roxanne (Salma Hayek).

Also living there are Marcus (David Spade), a single man with odd taste in women, and two couples: Kurt and Deanne (Chris Rock and Maya Rudolph) and Eric and Sally (Kevin James and Maria Bello), who have multiple children — although not the exact same lineups they had previously.

There are some family-dramedy issues. Roxanne wants to have a fourth child, but Lenny is reluctant. Eric is spending too much time with his mother (Georgia Engel, still riffing on her Mary Tyler Moore Show role as Ted Baxter's naive girlfriend).

Marcus, meanwhile, meets the son he didn't know he'd fathered, who turns out to be large and threatening. And two teenage offspring ponder their first dates.

To call these plot points would be to overstate their importance. Even more than the first one, Grown Ups 2 is a series of riffs, skits and sight gags, barely integrated into anything resembling continuity. Director Dennis Dugan, a longtime Sandler enabler, lines up the episodes competently but without anything more than a rudimentary sense of structure.

Adding to the grab-bag feel are a large number of cameos: Shaquille O'Neal and Steve Buscemi take minor roles, and Twilight werewolf Taylor Lautner flexes and flares as a shirtless frat boy who leads his fellow meatheads in clashes with the older guys. The reunited J. Geils Band actually performs during the '80s-themed party that serves, just barely, as a finale. And there are so many appearances by former Saturday Night Live cast members that the movie begins to look like a benefit for the SNL Pension Fund.

Sandler, one of three credited screenwriters, gives Lenny a few parenting moments that in real life would require the intervention of Child Protective Services. But he is, of course, really a great dad. Deep down. Really, truly. Grown Ups 2 doesn't push that button as often as its precursor did, but this movie, like all of Sandler's, insists on its star's likability.

It might be time for the actor to play a character who more honestly embodies the hostility his performances exude. But apparently Sandler's not grown up enough for that yet.