Accessibility links
At 90, Ellsworth Kelly Brings Joy With Colorful Canvases The nonagenarian artist recently received the National Medal of Arts, and museums around the world are still celebrating his May birthday. The Phillips Collection, in Washington, D.C., is displaying seven "exuberant" pieces: layered or lined-up canvases painted in bold, solid colors.

American artist Ellsworth Kelly turned 90 in May, and there's been much celebration. On Wednesday, President Obama presented Kelly with the National Medal of Arts. Meanwhile, museums around the country are showing his work: Kelly sculptures, prints and paintings are on view in New York, Philadelphia and Detroit. In Washington, D.C., the Phillips Collection is featuring his flat geometric canvases, layered to create wall sculptures.

These Kelly works seem baffling at first, maybe scoff-worthy — simple, solid canvases of color. But if you crouch and bend to inspect the shadows that the combinations of canvases cast on the gallery walls, you can start having fun with them.

At the Phillips Collection, museum director Dorothy Kosinski does exactly that. "With the shadows he introduces maybe another color, a gray, and certainly another dimension," Kosinski says. "It almost reads like a box."

The Phillips is showing seven Kelly works, each featuring multiple canvases painted in solid, bright colors. One piece has four separate panels in a row: a green rectangle, a blue rectangle, a black square, a red-orange square. Kosinski, who says Kelly is one of the major 20th century American painters, sees perfection in these panels. 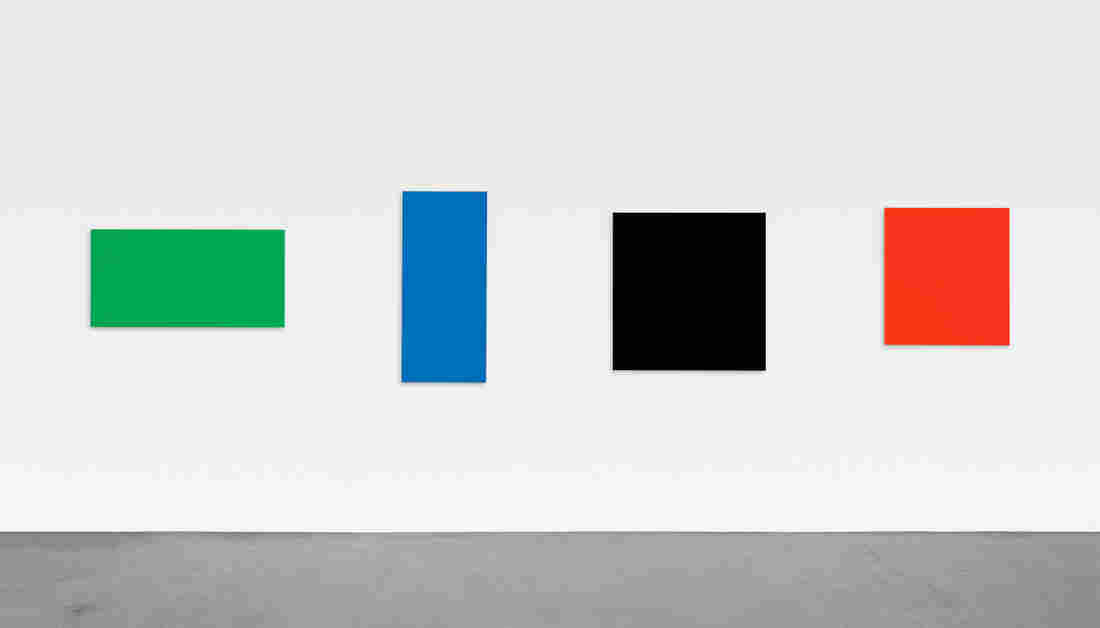 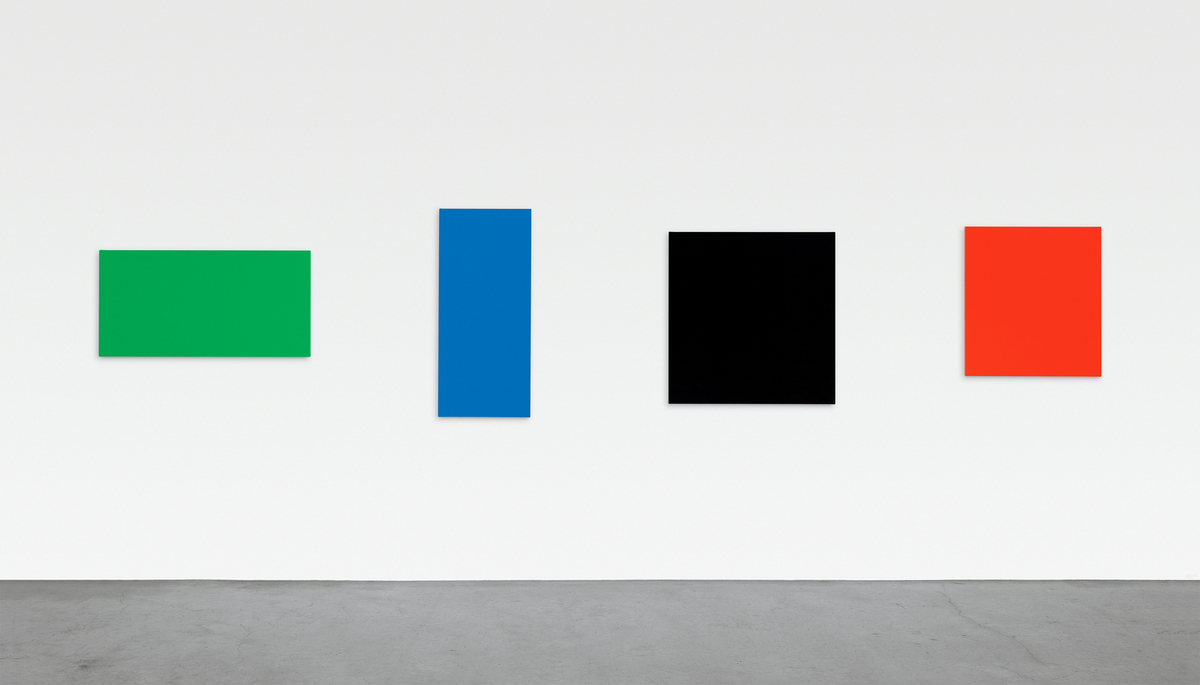 "The entire wall becomes part of a very demanding, rigorous and yet terrifically exuberant composition," she says. "Isn't it exuberant?" Indeed, the gallery feels cheerful — and, at the same time, serene.

Kelly himself was not feeling so cheerful the day museum director Kosinski spoke of exuberance. He'd been at a Phillips dinner the night before, felt ill the next morning, and went back home to Spencertown, N.Y. He missed the 90th-birthday party the museum put together, with champagne, birthday cake and the obligatory birthday song. 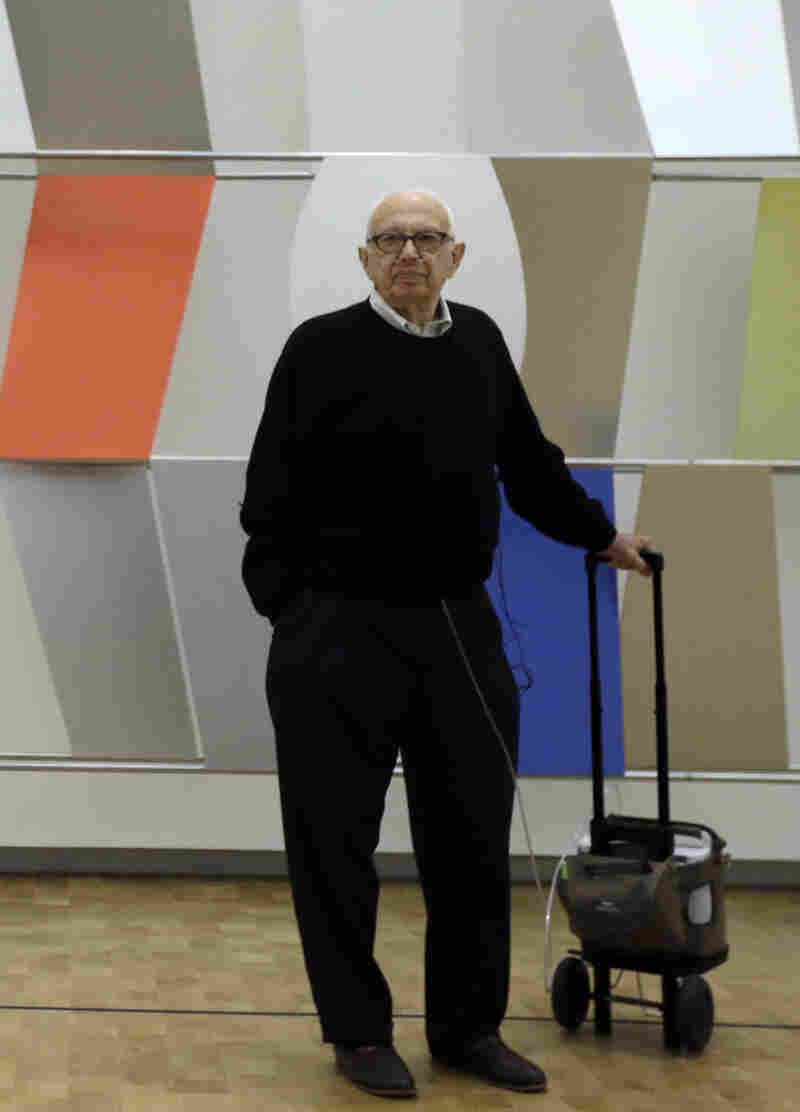 Artist Ellsworth Kelly, shown here in April at the Barnes Foundation in Philadelphia, turned 90 this May. Matt Rourke/AP hide caption 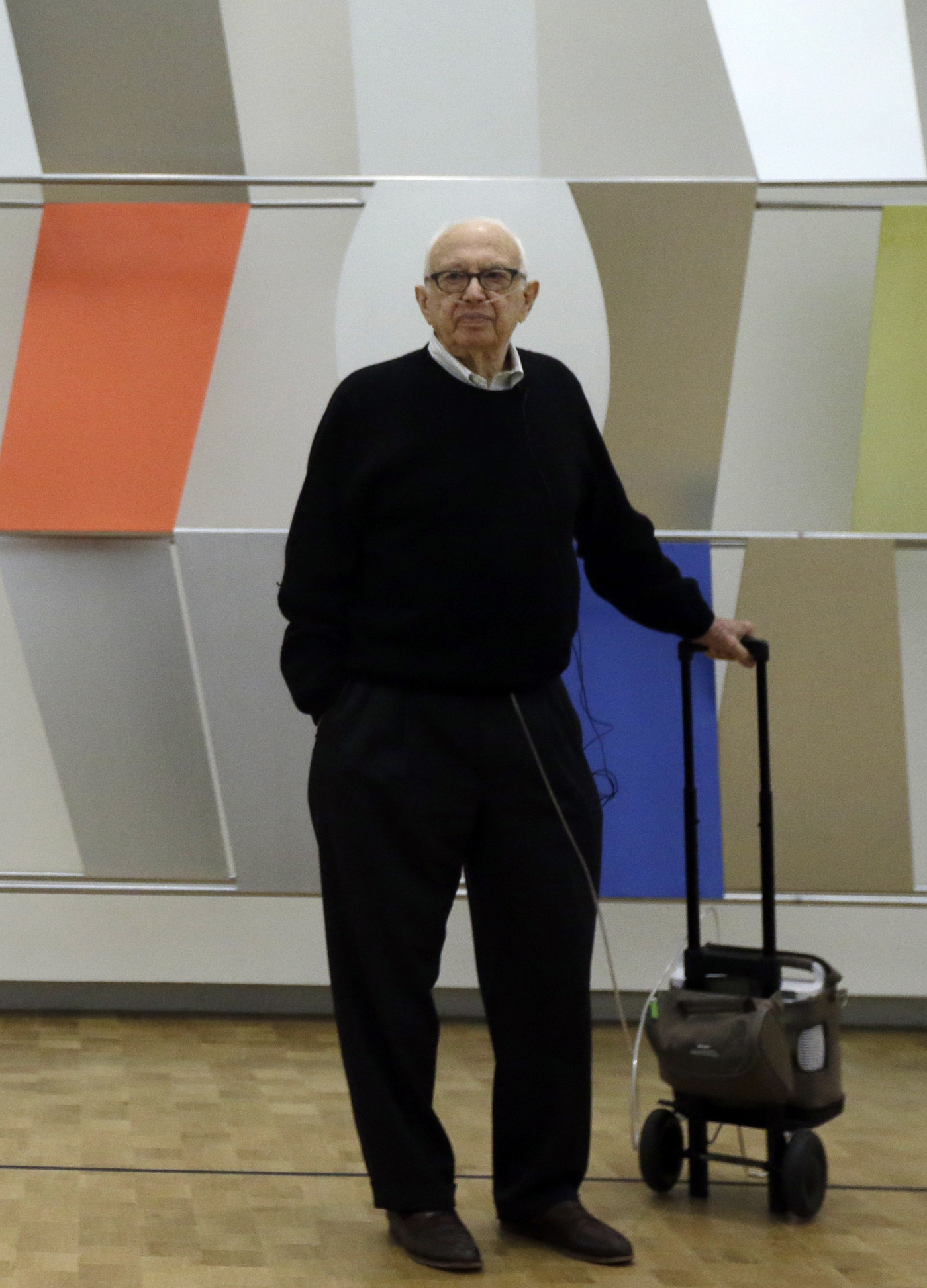 Artist Ellsworth Kelly, shown here in April at the Barnes Foundation in Philadelphia, turned 90 this May.

A week later, by phone, Kelly was reluctant to discuss his art: "I don't really talk about my work unless I'm with it," he says. But he agrees to discuss someone else's artwork — a famous Renoir, reproduced in a big Phillips Collection art book.

Renoir's joyful, jubilant The Luncheon of the Boating Party, from 1881, is the Phillips Collection's best-loved work. In it, sun-dappled men and women finish off a delicious meal, and wine, on a riverside porch.

"The happiness that [Renoir] was able to get into the picture is very visible," Kelly says. "I don't know if Americans have painted a picture quite like this."

As a very young artist, Kelly tried painting like Renoir and others — real-life scenes, people, landscapes. In the 1950s he shifted to his crisp abstract shapes: no narratives, nothing going on but color.

"I learned my color in Europe," Kelly says. "I've always been a colorist, I think. I started when I was very young, being a bird-watcher, fascinated by the bird colors."

Kelly came back from studying in Paris with a series of flat, geometric panels in the color spectrum — the colors you see when light hits a prism.

"Each color had to have its own canvas. ... I feel that I like color in its strongest sense," Kelly says. "I don't like mixed colors that much, like plum color or deep, deep colors that are hard to define. I liked red, yellow, blue, black and white — [that] was what I started with."

And he's still at it. Kelly has been making his layered, flat-colored, geometric panels for 60 years now. When he began, other young artists were busy with abstract expressionism; Jackson Pollock, with his ropes of thick paint, was the man of the moment. Kelly — well, he was not.

"It was a very hard job doing it all myself, getting to where I am," he says. "And I'm still continuing that exploration of color and form."

Kelly didn't get attention until the 1960s, when pop artists like Andy Warhol and Roy Lichtenstein came along with their strong, clear colors. His persistence over the years has had a sweet goal: "I've always wanted ... I wanted to give people joy," he says.

By the time the Phillips show closes in September, it's a good bet that in his upstate New York studio, Ellsworth Kelly will have produced more new — and often joy-giving — works.