Accessibility links
Wastewater Wells, Geothermal Power Triggering Earthquakes Pumping industrial wastewater into storage wells deep underground can prime nearby faults for an earthquake. And studies show that a large quake — even one on the other side of the planet — can also push faults over the edge and set off a swarm of mini-earthquakes. 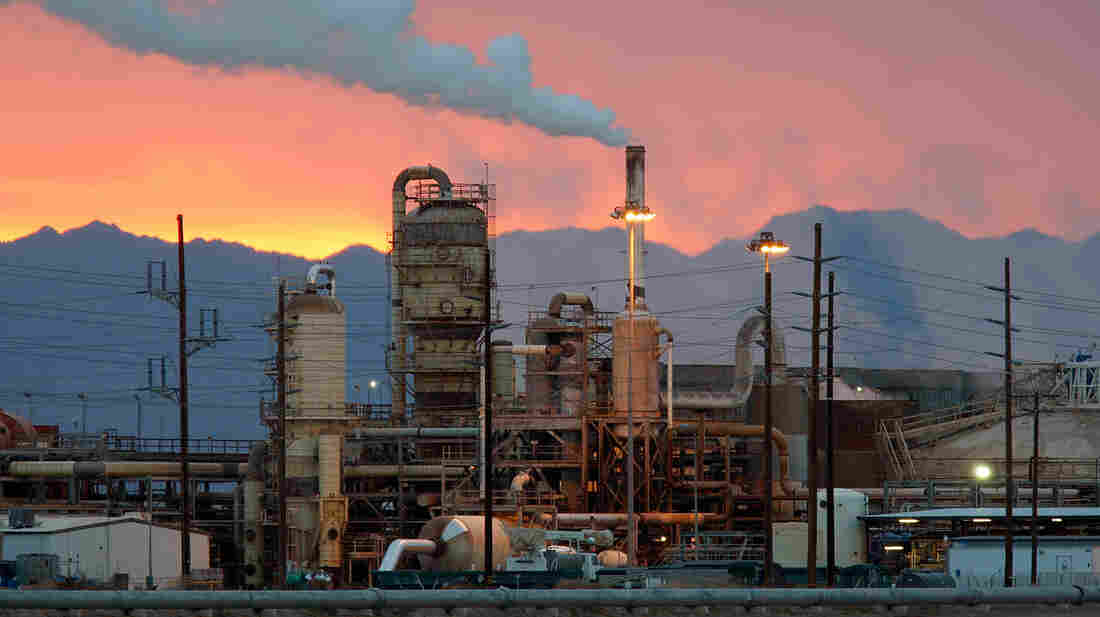 The continental U.S. experiences small earthquakes every day. But over the past few years, their numbers have been increasing. Geoscientists say the new epidemic of quakes is related to industrial wastewater being pumped into underground storage wells. 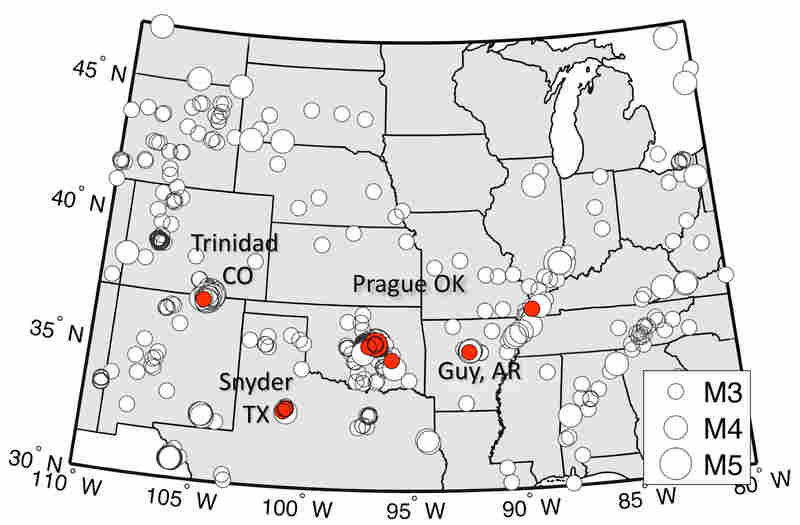 This map shows all the earthquakes stronger than magnitude 3.0 between 2003 and 2013. The earthquakes marked in red occurred in the first 10 days following large earthquakes in Chile in 2010, Japan in 2011 and Sumatra in 2012. The triggering of these quakes occurred almost exclusively in three injection well fields, labeled Prague, Trinidad and Snyder. Science/AAAS hide caption 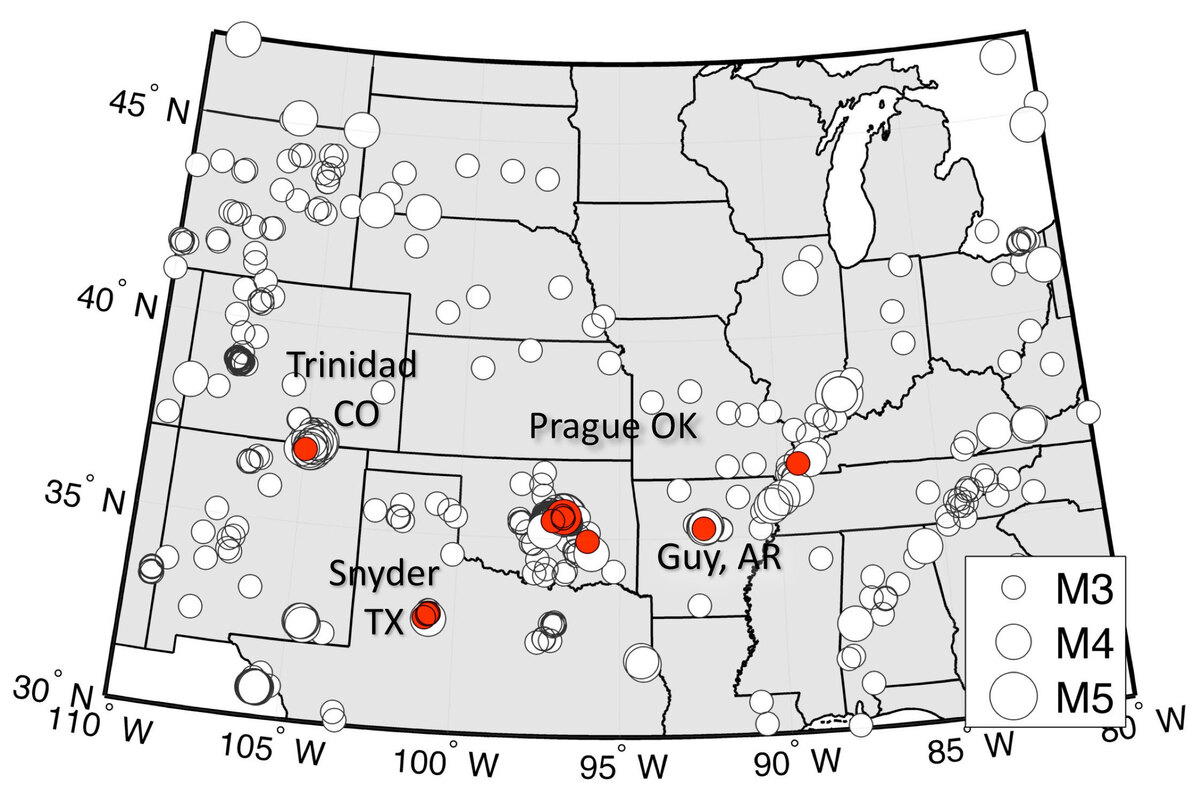 This map shows all the earthquakes stronger than magnitude 3.0 between 2003 and 2013. The earthquakes marked in red occurred in the first 10 days following large earthquakes in Chile in 2010, Japan in 2011 and Sumatra in 2012. The triggering of these quakes occurred almost exclusively in three injection well fields, labeled Prague, Trinidad and Snyder.

Now there's new research that reveals two trigger mechanisms that may be setting off these wastewater quakes — other, larger earthquakes (some as far away as Indonesia), and the activity at geothermal power plants.

Most of these little quakes in the U.S. are too small to feel. They tend to happen in "swarms." Over the past year, geoscientists traced some of these swarms to underground faults near deep wells that are often filled with waste fluid from the oil and gas drilling boom.

Nicholas van der Elst, a geophysicist with Columbia University's Lamont Doherty Earth Observatory, says there are lots of small faults all over the country. The injection of fluids migrates in and around the fault itself, "and kind of pushes outward on the fault walls and makes it easier for the fault to slip," he says.

The wastewater "loads up" these faults with tension until, at some point, they slip and the earth moves.

So what van der Elst wanted to know was: "What prompts that slip?" Sometimes it's just all that water building up. However, he discovered that in three cases in the past decade — in Oklahoma, in Colorado and in Texas — the trigger was yet another earthquake, a really big one, thousands of miles away. In each case, the large earthquakes set up large seismic waves that traveled around the surface of the earth "kind of like ripples," van der Elst says. "You can even see them on seismometers, going around the world multiple times."

Those three big quakes rang the planet like a bell. And when their seismic waves reached underground faults near waste wells in those three states, they nudged the tension in the faults past the brink. Soon, the area near the wells was swarming with mini-quakes.

And some of those swarms eventually culminated in pretty big temblors — in the magnitude-4.0 to -5.0, which is big enough to do some damage.

Hydraulic fracturing relies on high-pressure water and sand to break apart rock and extract natural gas. The wastewater generated by hydrofracking and other types of gas drilling is injected deep underground for long-term storage. Seismologists believe wastewater injection is causing earthquakes in some parts of the country. Waste wells often go deeper than gas drilling wells, down into basement rock, where faults are more common. Scientists think the water may be lubricating faults in the Earth's crust, causing them to slip.

Van der Elst's findings appear in this week's issue of the journal Science. In the same issue, geoscientist Emily Brodsky at the University of California, Santa Cruz, reports yet another trigger mechanism for mini-quakes: the production of geothermal energy.

The power plant in question, near Southern California's Salton Sea, extracts hot water from beneath Earth's surface and turns it to steam to make electricity, then returns most of it underground. "What we found," Brodsky says, "is that the earthquake rate correlates quite strongly with the extraction of water from the field" underground.

On average, extracting half a billion gallons of water per month resulted in one detectable earthquake every 11 days.

Now, scientists have known that geothermal power plants cycling water from underground can cause small quakes. But Brodsky's research actually matches the amount of water moved to the frequency of the quakes.

These quakes are very small, she notes. But it concerns her that the geothermal plant she studied is near the southern tip of California's San Andreas fault — the source of many of the state's biggest temblors. "We ought to know what's happening on the southernmost terminus of the San Andreas fault," she says. "Of various places in the world to induce earthquakes, this is a particularly sensitive one."

Brodsky says it's unlikely that the geothermal plant could induce a major quake on the fault, but it's theoretically possible. The chance is more than zero, she says, but she doesn't know what the real risk is; that's what she wants to find out next.

The company that owns the plant, Mid-American Energy Holdings, declined to comment on the research.

The U.S. Geological Survey's William Ellsworth has been in the thick of this science. "One of the major questions we're concerned about," he says, "is, 'How large might an induced earthquake be?' We don't have the answer to that, and it's one of the keys to being able to better forecast the seismic hazard going forward." Ellsworth says geologists need more seismic-monitoring stations and more data from waste wells and geothermal plants to figure out the risk.