Accessibility links
'Sharknado' Dares To Ask: Is It Going To Rain Giant Man-Eating Sharks? If you couldn't get away from the movie Sharknado last night, you're not alone. We're here to help. 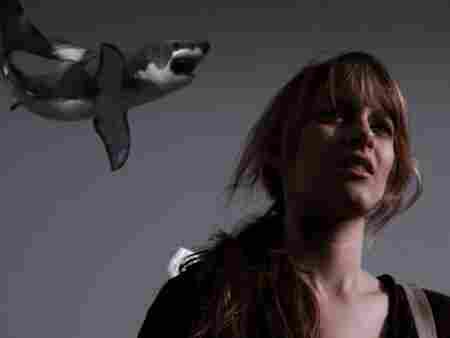 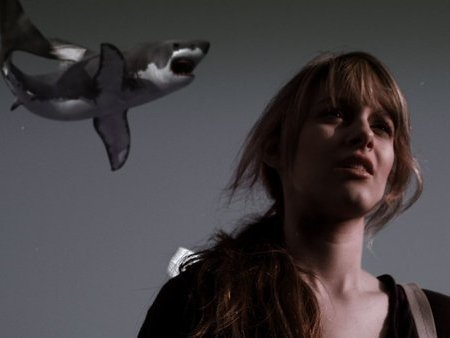 Aubrey Peeples as Fin's daughter in Sharknado. Which really happened.

If you have a Twitter account, there's an excellent chance you already know about Sharknado, SyFy's meteorological-marine horror movie that premiered last night. When I tell you that a lot of people were tweeting about Sharknado, I'm not lying.

Not to mention ... well, you know. Possibly NPR personalities.

Anyway, I feel it's my responsibility as your pop-culture blogger to tell you all about Sharknado so that you're familiar with it, but you don't actually have to watch it. Warning: This review contains spoilers that reveal the plot of Sharknado, some of which will come as a large surprise if you haven't read the title of the movie.

Sharknado stars Ian Ziering, the curly-haired blond dude from Beverly Hills, 90210, as a surfer who is named — and I would say here "I kid you not" except that if I start saying that now, you will think I am kidding about other things unless I say "I kid you not" every time, which would not be efficient belie-hee-heeve you me — "Fin." Fin owns a bar, and he has a friend named Baz, a sweet young thing after his chili whose name is Nova, and a barfly named George for whom he is kind of responsible, who is played by actual actor John Heard who presumably snagged this role from a jealous, frustrated George Wendt.

Fin also has an estranged wife played by Tara Reid from the American Pie movies, whose role is to allow SyFy to advertise that this movie has Tara Reid in it and to falsely advertise (spoiler alert) that she might possibly be eaten by a shark in it. Fin and Tara Reid have a teenage daughter and an adult son, despite the fact that Tara Reid is only 37.

But I digress, in the same sense that people might digress in explaining that it's very unlikely aliens who visited Earth and hid in our backyard sheds would actually like Reese's Pieces that much.

One day, while Fin is surfing and chatting with a pretty young woman who is about to be consumed (another spoiler alert), California falls victim to two major problems at once. The first is a rare hurricane (albeit one that sometimes leaves it sunny and the ground dry even after it hits, because putting rain in movie scenes is expensive and logistically complicated). The second is a terrifying influx of foam rubber sharks.

The initial natural outcome is that when the hurricane causes flooding and overwhelming waves, all the flood waters and waves are infested with sharks. (This takes up enough of the movie that technically, it would be more accurate to describe it as a cross between sharks and flooding, but I presume that was abandoned after unfavorable focus-group testing of the hashtag #Flarks.) Somewhere along here, Real Actor John Heard collects his last paycheck after presumably crossing "shoot a scene where I conk a rubber shark with a barstool" off his bucket list, and George is devoured while saving a lady's dog. (REDEMPTION FOR BARFLIES! NOW GEORGE CAN BE RAPTURED!)

First, Fin has to go to his wife's house, which quickly floods with sharks. He "tries" "really hard" to save her grody boyfriend, but the grody boyfriend is eaten by the sharks, which Tara Reid reacts to by frowning. So, you know. Kind of a casual relationship. Then they all flee together — Fin, Baz, Tara Reid, Nova, Teenage Daughter, Alvin, Simon and Theodore — to find Adult Son Matt.

I fast-forwarded through some parts around this point, but basically, they find Matt, who flies helicopters, and he and Nova form a bond when she privately discloses to him that her grandfather was killed by a shark, so she is now carrying a grudge against all sharks. Presumably, if she were not carrying a grudge against them, she wouldn't be shooting them with her giant gun, but instead letting them eat people, because sharks gotta swim and sharks gotta eat folks, etc. etc. (At least movie sharks. PSA: SHARKS DON'T HATE US.)

Okay. So by this point, Fin and Tara Reid look out over the ocean and realize that there are water spouts forming over the ocean, and that within those water spouts are sharks. And those sharks, unfortunately, are fine in spite of being trapped in water spouts. They're really just hanging out, biding their time until they can land in the pool at a nearby retirement home, because yes, that is coming. (Spoiler alert.)

So the group comes up with a plan to fly a helicopter into each Sharknado and detonate a bomb that will diffuse it and presumably kill the sharks. Matt and Nova go up in the helicopter, and they're in charge of setting off the bombs, while Fin is responsible for taking out a handgun and shooting out of the sky the falling sharks.

Naturally, this excellent and very logical plan works perfectly until Nova falls out of the helicopter and is devoured. Whooooops. Matt, who just got through falling in love with her because of the shark-ate-grandpa story she told him maybe ten minutes ago, is heartbroken.

And somewhere in here, the sharks start falling in the retirement-home pool and coming straight for the lady who was doing water aerobics, which is really mean.

Back on the ground, everyone regroups and everything is partially resolved, but there are still more sharks coming, and the point is that in the end, Fin leaps up with a chainsaw in his arms and tries to attack a shark before it can get him, but he goes right into the mouth and it swallows him and it's all so terrible that his kids are like, "OH GOSH!" Like you would be if your father and his perfectly good chainsaw were eaten by a shark.

A side note: It's really gory in a way, Sharknado, but a lot of the time, it seems like gruesome deaths are conveyed by dropping three bowling balls into an off-screen bathtub full of a 50-50 mix of motor oil and raspberry Kool-Aid.

Anyway. Then, miraculously, there is a buzzing sound. And a splatter of blood. And then more blood, yaaaaay! And Fin chainsaws his way out of the shark from the inside, unharmed. (Chainsaw still works, too!) As you can imagine, his kids and wife are very relieved.

Fin climbs back in through all the blood and goo, much as you would if you were an infant born in a room where this movie was on, and he retrieves an unconscious and blood-covered but otherwise unharmed Nova! It turns out that the shark that swallowed him was her same shark! Out of all the sharks! It's sort of like finding a needle in a haystack, except that the needle is a girl and the haystack is millions of shark organs.

Nova and Matt are reunited, and Tara Reid takes one swipe at Fin's face to wipe off some of the shark parts and then kisses him, so they're reunited too. And Nova's real name is Jenny, because sure! And everyone at the retirement home lived!

And then the movie ends, and the title card comes up: "fin."

This was real. Now you know.