Accessibility links
A Summery Spread That's As Cool As A Cucumber It's summertime and cucumbers are abundant. If you don't feel like making pickles, why not try Benedictine? This blend of cream cheese, cucumbers and onion is a Kentucky classic, dating back a century to a Louisville tearoom. 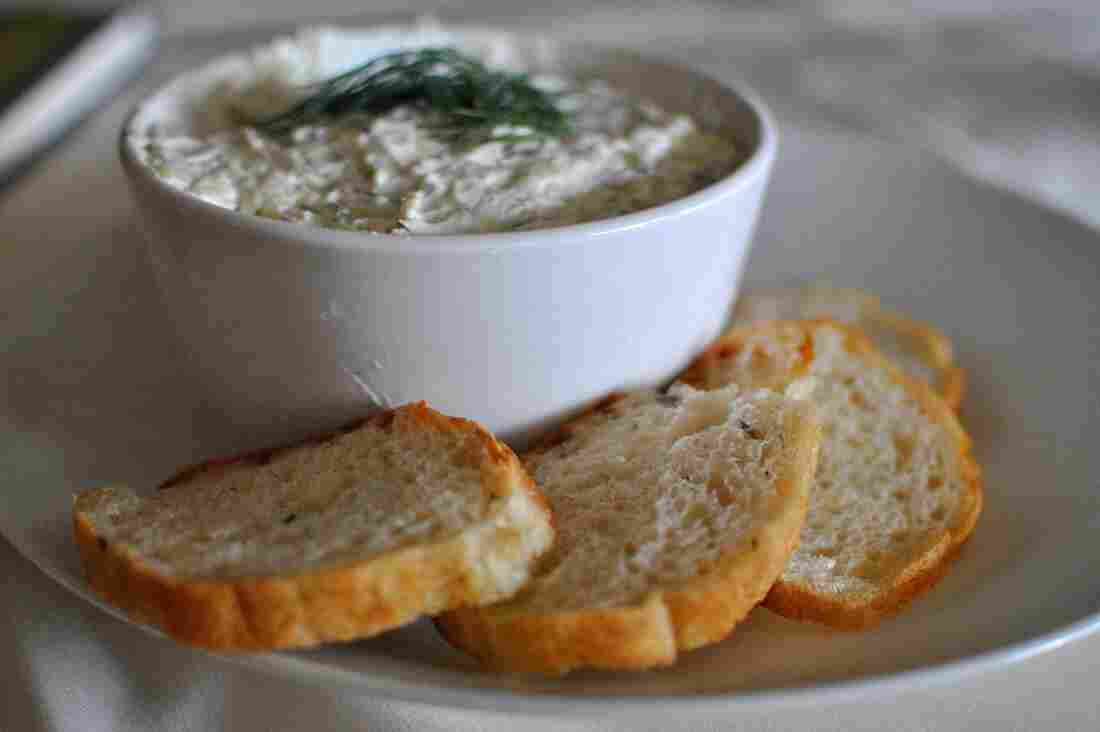 Benedictine is a combination of cream cheese, cucumber and onion. It may sound odd, unless you're from Kentucky. Erica Peterson/WFPL hide caption

Cream cheese, cucumber juice and a touch of onion. That may sound like an unlikely combination, but Benedictine is a Kentucky favorite. Gwynne Potts, a self-proclaimed aficionado, says it's delicious.

"The best thing to eat Benedictine on is just white bread," Potts says. "No special bread; it only takes away from the Benedictine."

Potts, who grew up in Louisville, Ky., has been enjoying the creamy combo for six decades. For the first 18 years of her life, she says, Benedictine was like ketchup. She assumed it was eaten everywhere until, as a college student, she took a spring break trip to Florida.

"We couldn't imagine having lunch without Benedictine," Potts says. "We went from store to store, saying, 'Where's your Benedictine?' And they just looked at us. It was the first time I realized the whole world didn't know about Benedictine."

Years later, that's still pretty much the case. But this creamy, cool cucumber spread has persisted in Kentucky ever since Jennie Benedict, a famous Louisville caterer, invented it around the turn of the 20th century.

Benedict opened a tearoom on downtown Louisville's South Fourth Street in 1911. Back then, that was the city's bustling commercial center, packed with stores, cafes, theaters and hotels. Today, it's a few boutiques and several wig shops.

Susan Reigler, a former restaurant critic for Louisville's newspaper, The Courier-Journal, wrote the introduction to the re-release of Benedict's Blue Ribbon Cook Book in 2008. Reigler says Benedict's role in the city's culinary history was huge and that the roots of many of the city's flavors can be traced back to her recipes.

Of course, some of Benedict's concoctions have fallen out of favor — like calf brains and peptonized oysters for the sick. But Reigler says Benedictine has endured.

"I think it's just very different. It's very refreshing. It's a light spread," she says. "What could be more light and delicate than cucumber juice?"

One source of contention among Louisville chefs is whether to include the two drops of green food coloring that Benedict used in her recipe. The dye lets people know that it's not just a plain cream cheese spread, but the practice is no longer popular with chefs like Kathy Cary, who prefer more natural ingredients.

Cary has owned Lilly's, a restaurant that specializes in Kentucky cuisine, for the past 25 years. For her, the dish is truly a way to showcase both local cucumbers and local traditions.

"Mine is really about ... celebrating the cucumbers," Cary says. "Obviously, no dye, no food coloring. And it's filled with texture, and sort of the crunch of the cucumbers."

Some cooks serve Benedictine as a dip, others as tea sandwiches with the crusts cut off. But Cary usually puts hers into a hearty sandwich with homemade mayonnaise, bacon, bibb lettuce and sprouts.

However you serve it, Benedictine is best accompanied with another Kentucky signature: bourbon.

A few grains of cayenne pepper

To get the cucumber juice, peel and grate a cucumber, then wrap in a clean dish towel and squeeze juice into a dish. Discard pulp.

Do the same for the onion.

Mix all ingredients with a fork until well-blended (using a blender will make the spread too runny). Serve as a dip or as a sandwich filling.

Editor's Note: These recipes have not been tested by NPR.