Accessibility links
Om Nom Nom: T. Rex Was, Indeed, A Voracious Hunter A fossilized tyrannosaur tooth found lodged between bones in a hadrosaur's tail is giving paleobiologists pretty firm clues about the tyrant king's meal plan. And Hollywood may have been right all along — T. Rex definitely knew how to kill. 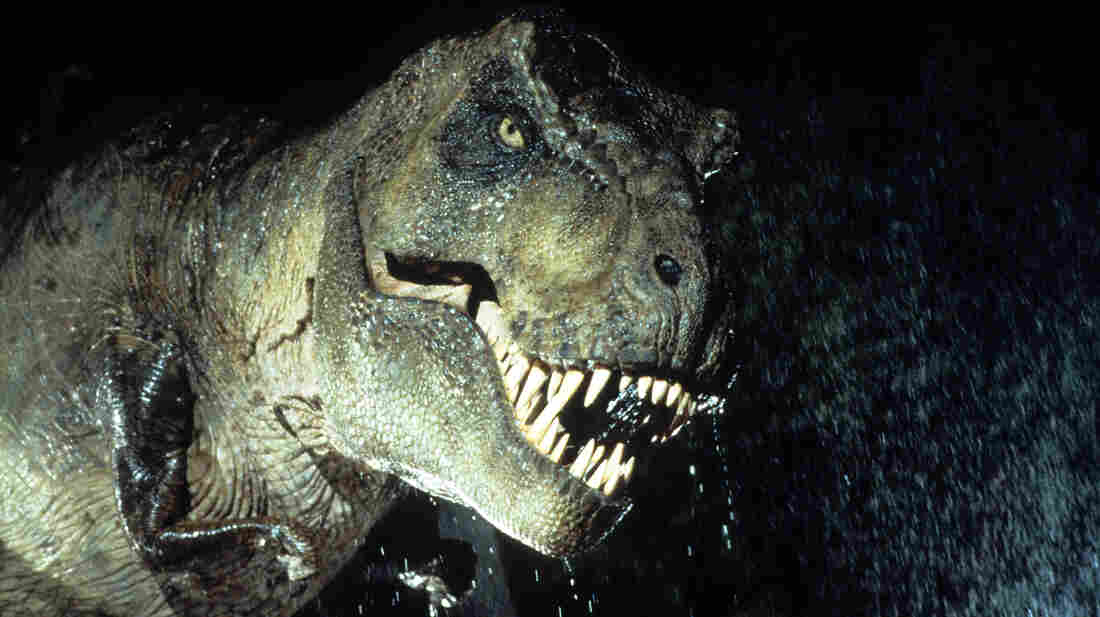 Tyrannosaurus rex is perhaps one of the most famous animals to have ever roamed the Earth. This huge, fierce meat-eater has graced Hollywood films as the perpetual villain, and it has played a notorious role in the science community that studies it, too.

Despite its vicious depiction in pop culture, paleobiologists have debated the feeding behavior of T. rex over the past 100 years, ever since the first evidence of the animal was discovered in the early 1900s. Some scientists have a bone to pick with the tyrant king's predatory reputation, and have suggested the dinosaur was actually a scavenger — more like a vulture when it came to whetting its appetite.

But results from a recent discovery might settle this debate. Writing in the Proceedings of the National Academy of Sciences, University of Kansas paleontologist David Burnham and one of his graduate students report a strange-looking fossil with something buried between two tail bones from a duck-billed, plant-eating dinosaur called the hadrosaur.

After they scanned it with a medical imaging machine, they figured out it was a tooth.

"Once we realized it was a tooth, we looked at each other and said, 'Wouldn't it just be great if it was a T. rex?' " Burnham says.

As luck would have it, it really was a tyrannosaur tooth. T. rex teeth are very distinctive: They're sharp, serrated and long. Some scientists call them "lethal bananas."

Burnham and his team were excited because this tooth that was stuck in a portion of tailbone might have been the piece of evidence they needed. "We'd finally be able to put the nail in the coffin for the scavenger theory."

A T. rex tooth in the tail doesn't prove the dinosaur actually killed the hadrosaur. Maybe the hadrosaur was already dead and the T. Rex just found it, chowed down on the carcass, and broke off a tooth. But in this case, the hadrosaur's bone had fused around the T. rex tooth, a sign that the wound had healed. So apparently the hadrosaur survived an attack and got away, with a tooth stuck in its tail.

Expedition Notes: In The Field With Fossil Hunter Barnum Brown

"It's the bullet from the smoking gun," Burnham says. "Here you have attempted murder, and here we are able to identify the perpetrator." Another damning piece of evidence, Burnham notes, is that the wound is on the tail, which is typical of where predators bring down running prey.

A mangled piece of proof like the hadrosaur bone isn't easy to come by, says Greg Erickson, a professor of anatomy and vertebrate paleontology at Florida State University.

The real T. rex may have been a more complicated animal than the one depicted in Hollywood films like Jurassic Park. Like most predators today, the dinosaur was probably both predator and scavenger.

"So what T. rex did more of is really the key, and to me this debate is not solved," Erickson says. "From this, all we can say is, yes, T. rex acted like a predator. We have cases where there are hundreds, sometimes thousands of duck-billed dinosaurs that died, and these animals were clearly fed upon by tyrannosaurs. We find tooth marks and shed teeth among the skeletons."

This all might seem to be an academic debate, but there is a real-world reason why scientists want to know what T. rex ate and when. Knowing more about the T. rex appetite might help explain the prehistoric food chain from millions of years ago, and how one big dinosaur influenced it.