Accessibility links
Laughs And Drama Behind Bars With 'Orange Is The New Black' Netflix recently unveiled its newest exclusive series: Orange Is the New Black, created by Jenji Kohan, who also created Weeds. All 13 one-hour episodes of the first season are available for streaming, and David Bianculli says the show is another Netflix success. 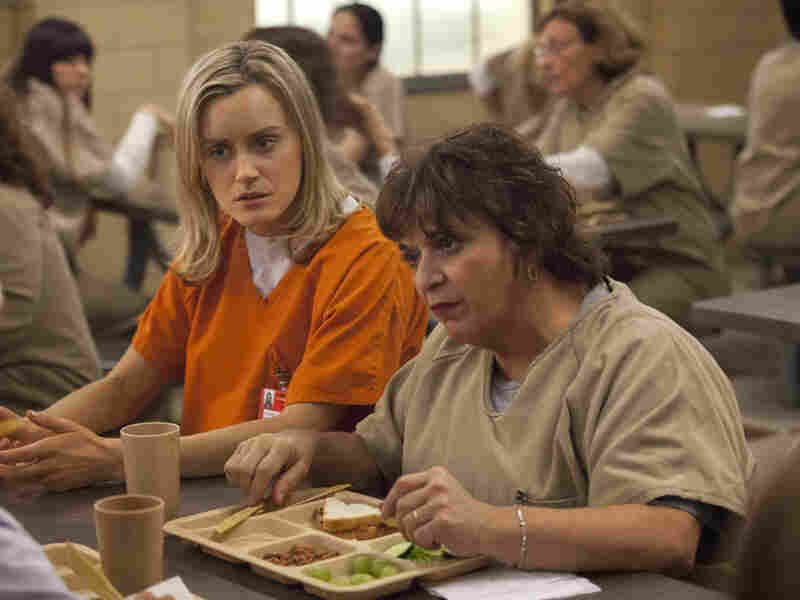 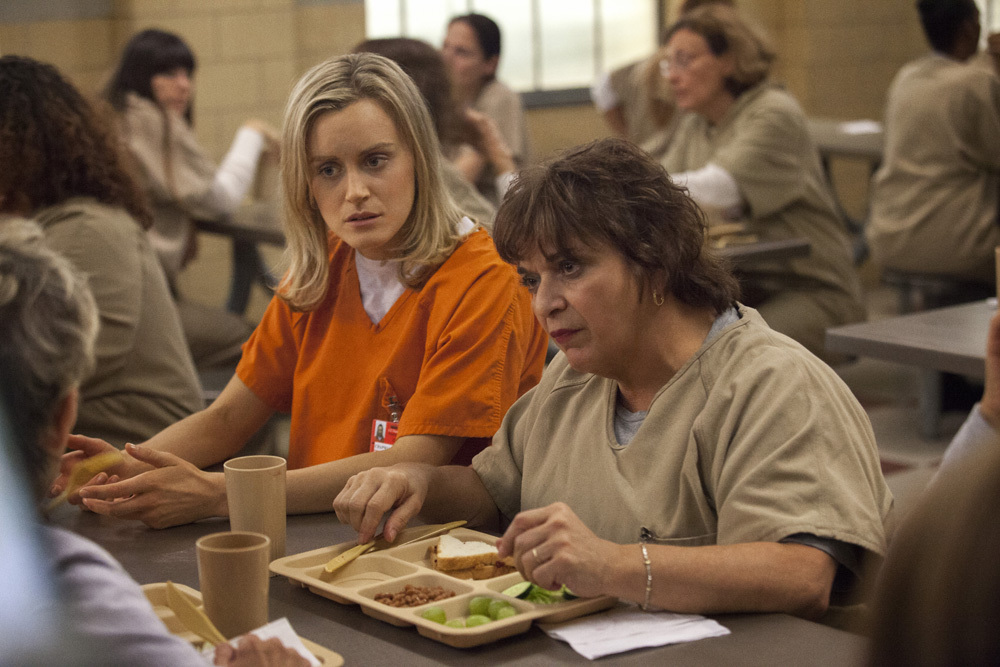 Taylor Schilling and Lin Tucci in the Netflix series Orange Is the New Black.

Netflix's original series Orange Is the New Black has two important TV predecessors. One is HBO's Oz, the 1997 men-in-prison drama from Tom Fontana that paved the way for HBO's The Sopranos. The other is Showtime's Weeds, which in the fourth season put one of its central characters behind bars.

The creator of Weeds, Jenji Kohan, clearly enjoyed the idea of a women's prison as fertile ground for both comedy and drama. With Orange Is the New Black, she goes back behind bars, but in a way that's more ambitious — and ultimately more impressive — than Weeds.

Weeds was played mostly for laughs. Oz was so serious, and so ominous, it was scary. Orange is somewhere in between. Some of it's funny, but some of its scenes and many of its characters stick with you.

The series is based on a memoir by Piper Kerman, whose character in Orange is named Piper Chapman. Each episode contains flashbacks that provide insight into the past of a different character — a structure familiar from Lost, and, before that, from Oz. But while the flashbacks are intriguing, and increasingly surprising, it's the scenes set in the present, as Piper enters the prison system, that really draw you in.

Taylor Schilling, whose only other significant TV role was as Nurse Veronica on NBC's Mercy series four years ago, stars as Piper. She displays more than enough vulnerability to elicit our empathy, even though she is indeed a criminal. (Though in these days when we end up rooting for the likes of Tony Soprano and Walter White, Piper hardly seems in the same league.)

More Orange Is The New Black

On her first day in prison, Piper meets her assigned counselor, Sam Healy, played by Michael Harney. Fans of Weeds may remember him as that show's Detective Mitch. He looks over her file, curious as to how a well-to-do 32-year-old white woman ended up in jail.

When Piper goes through her first day — meeting her bunkmates, going to the cafeteria — every step is tricky. If she befriends the wrong person or says the wrong thing (which she does, a lot), the consequences can be severe. We, as the audience, are taken along, experiencing the same steep learning curve.

By the third episode, we're as familiar with the nightly head-count routine as Piper is — and by the end of these 13 episodes, we not only know all the characters in this very large, very diverse ensemble comedy-drama, we feel for them, too. And that's quite an achievement.

The cast is so large that singling out only a few for specific praise is tough. But the two biggest names in Orange Is the New Black deserve credit for embodying characters that shatter the memories of their most famous TV roles. Kate Mulgrew, who played Captain Janeway on Star Trek: Voyager, is almost unrecognizable, and absolutely riveting, as Red, the proud Russian inmate who runs the commissary. And Laura Prepon, as Piper's former drug-smuggling lover, obliterates all traces of the sweet Midwestern teen she played on That '70s Show.

But there are plenty of others, too, from Jason Biggs as Piper's current boyfriend to Michelle Hurst as a particularly imposing prisoner named Miss Claudette. Each episode deepens our knowledge of these characters, so much so that by the end of the first 13 episodes, they're all three-dimensional, and more than a little haunting. And each episode ends with a cliffhanger that has you eager to see the next show immediately — which on Netflix, you can do.