Accessibility links
Use The Books, Fans: 'Star Wars' Franchise Thrives In Print More than 200 novels, the Star Wars' book series spans 25,000 years, from the beginning of the Jedi Order to 40 years beyond where the original trilogy left off. According to The Wall Street Journal's Alexandra Alter, the books help keep fans interested between movies. 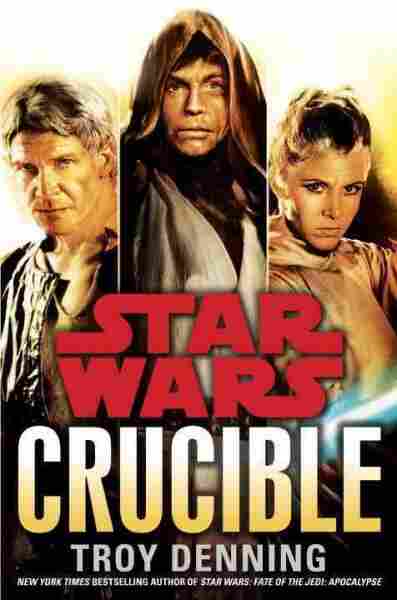 There's been a frenzy of excitement since last year when Disney bought Lucasfilm, creator of the Star Wars franchise, and announced it would make more Star Wars movies. Fans are eagerly awaiting hints of what might happen next in the story, and one way the franchise keeps fans interested is through a pantheon of Star Wars books, the latest of which is Troy Denning's Star Wars: Crucible.

Alexandra Alter wrote about LucasBooks, the publishing arm of Lucasfilm, for The Wall Street Journal. She tells NPR's David Greene that the novelizations have become much more popular than anyone thought they would.

According to Alter, "It's actually gotten to the point where there are really hardcore Star Wars fans that prefer the books to the movies."

On the time span the novels cover

"Twenty-five thousand years, and there's more than 200 of the novels, so it goes all the way back, I believe, to the beginning of the Jedi Order. Right now, they're sort of 40 years beyond where the original trilogy of movies left off, and that's kind of the furthermost point in the future for the novels."

"There [are] dozens of writers that contribute, everybody from horror novelists to sci-fi novelists. You have people that have kind of specialized in being Star Wars novelists, which is a sort of funny specialty for a novelist because there's not much creative freedom, actually. Lucasfilm controls all the story lines; they provide writers with really detailed plot points. The writers have to submit their outlines for approval, and anything that kind of deviates too far from what Lucasfilm has in mind is not going to be approved, that's going to be changed so that they can keep everything consistent across their brand."

"LucasBooks has three editors that are involved in crafting the story line. And then sort of the grand master of the universe — the Keeper of the Holocron is his official title — this is Leland Chee and he's the continuity editor and he's got an incredible amount of work to do. He has to make sure that, you know, in every single story the aliens have the right number of eyes and arms, the technology's right. He's the one that makes sure that there's no detail that's amiss, because fans would certainly notice if an alien had five arms and they were supposed to have four.

More About Star Wars From NPR:

The Force Is With The Navajo: 'Star Wars' Gets A New Translation

" ... The Keeper of the Holocron has created this vast database — it has 17,000 characters in it, it's got all the star systems in the galaxy. And he has this database that he searches through if he needs to refer to something. I think he's the kind of uber fan and genius who has a lot of it in his head as well."

On the size of the Star Wars books series, which began in 1976, before the first film even came out

"LucasBooks is putting out 60 to 70 titles every year. And I don't know of any other movie franchise that has created this other parallel universe of novels that has gone on to be perhaps as successful as the films, certainly reaching an audience far beyond what you would expect."

"Fans of the books are concerned that the new movies are not going to be faithful to the narrative that's unfolded. You know, 40 years have passed in the Star Wars world. Han and Leia are married [and] they have kids. Luke is married and has a son. And I think Star Wars fans really want to see those characters come to life on the screen and some of them are going to be very upset if they don't see the story of the books played out in films."