Accessibility links
In Today's Beijing, Flash Ferraris And Fading Traditions Who the heck are all of these 20-somethings and how in the world are they able to drive all these Ferraris and Maseratis? It's the first thing that struck NPR's Anthony Kuhn upon his return to Beijing after a few years away. It's also clear the city's distinctive dialect and foods are growing scarcer. 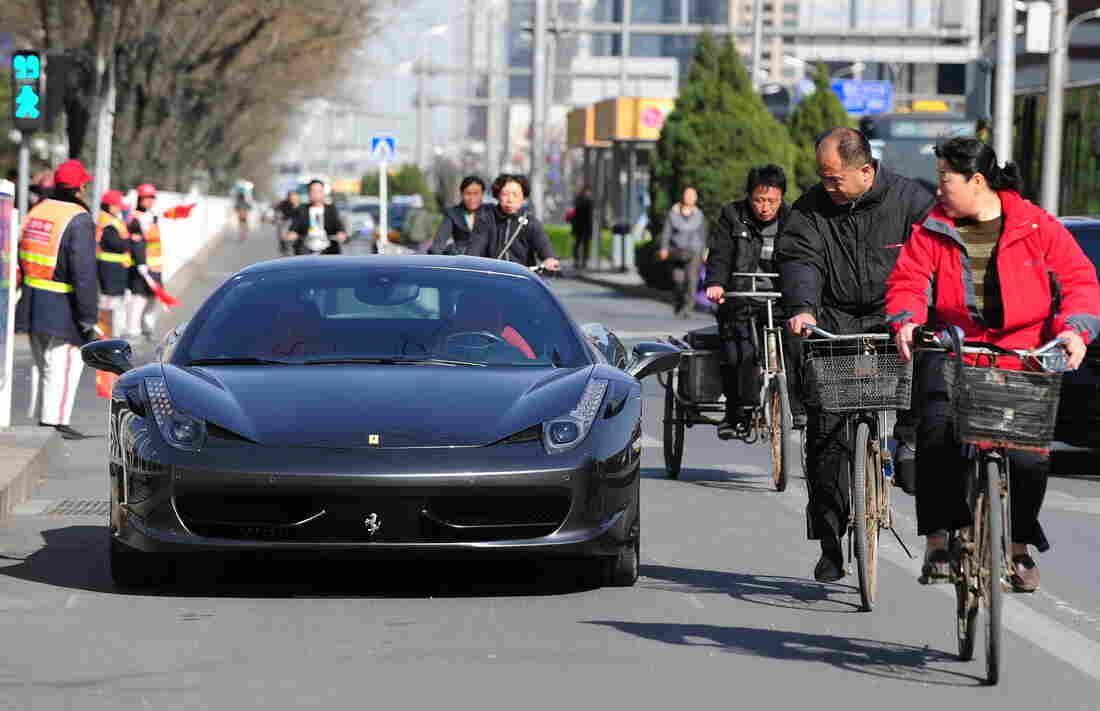 Cyclists look at a Ferrari parked illegally and blocking the bicycle lane off a main road in Beijing, on April 7, 2011. Frederic J. Brown/AFP/Getty Images hide caption 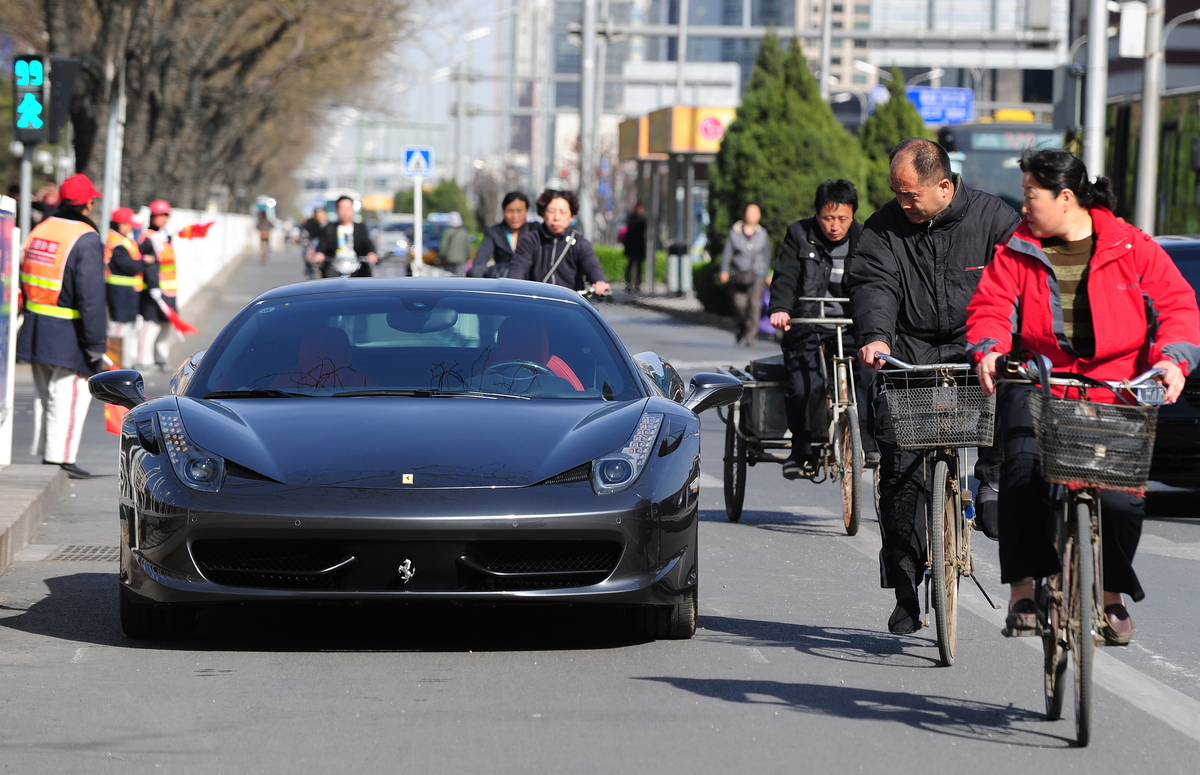 Cyclists look at a Ferrari parked illegally and blocking the bicycle lane off a main road in Beijing, on April 7, 2011.

Before it became China's capital in 1949, Beijing was a fairly provincial little city of 2 million people.

Today, it has grown into a megalopolis of some 18 million people.

I've recently returned to the city after a few years away, the first thing that strikes me is: Who the heck are all of these 20-somethings and how did they get to be driving all these Ferraris and Maseratis? 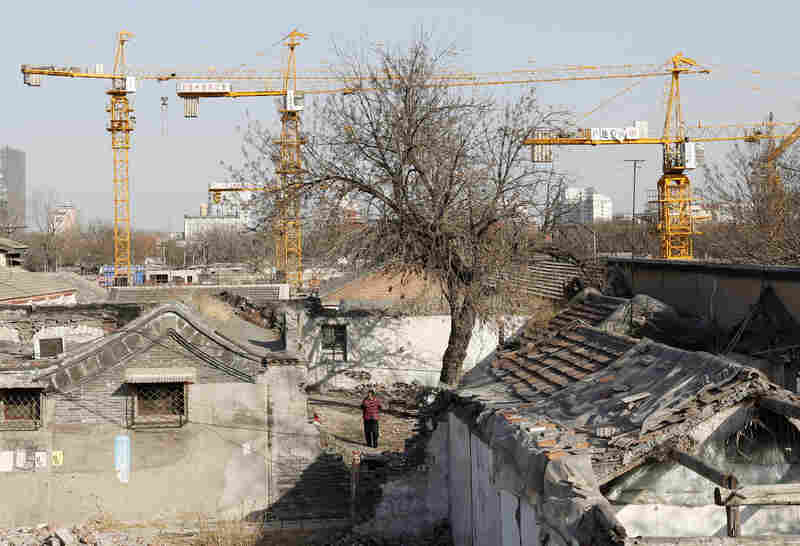 A woman in Beijing stands amid houses being demolished for new residential town, on Feb. 27. Kim Kyung-Hoon/Reuters /Landov hide caption 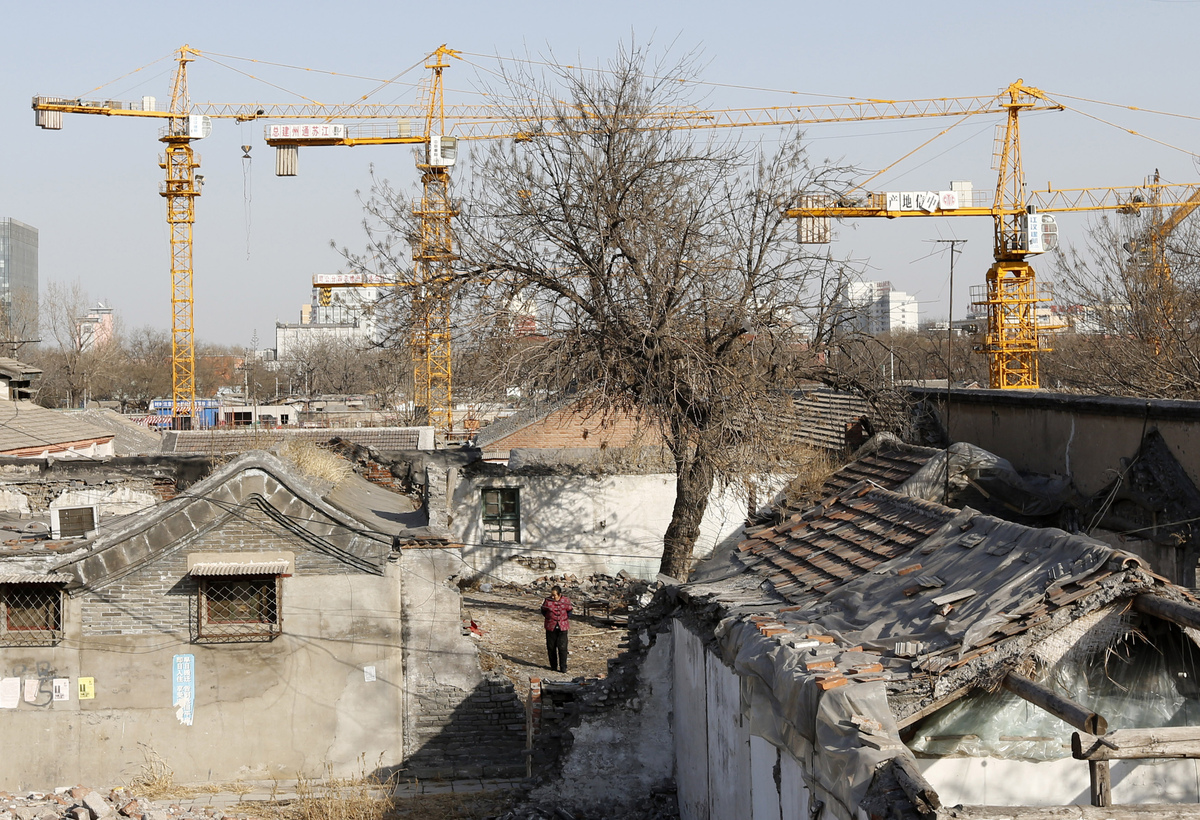 A woman in Beijing stands amid houses being demolished for new residential town, on Feb. 27.

I'm standing outside a shopping mall full of clothing stores, and it just so happens that there are two Ferraris, one red and one white parked outside. And sure enough there's a very young looking guy getting his handbag out of the trunk of the Ferrari.

I ask him a couple of questions and find out that this guy's family name is Zhang, that he's from China's Inner Mongolia region and builds roads there, and that at age 25, he can afford a Ferrari 458 Spider, which he says cost him $912,000, all taxes and fees included.

That's about all he'll tell me, so I've got only a sketchy answer to my questions.

Not far from the Ferraris, a blind man plays his musical instrument for spare change.

The sound reminds me of the old Beijing neighborhoods where I used to live. Now I'm living another life in a new part of the city, where I hear very few Beijing accents and there is probably more Thai food and sushi than Beijing-style dumplings and noodles. It reminds me of Manhattanites complaining that, before you know it, you'll have to go to Brooklyn to get a slice of pizza.

Out in the suburbs, I met a violin maker named Guan Zheng. He was born in Beijing in 1959. Some residents have been exiled to the city's fringes, their homes demolished by developers. But Guan says his life is much improved since he moved from a crowded old courtyard in the city center four years ago.

"Now we have more than 2,000 square feet for our family of three. I feel that's already pretty good," Guan says. "But we don't have the same atmosphere. Neighbors don't ask after each other in the same ways: 'Have you eaten yet?' 'How are you?' People are cut off from each other, living in these concrete shells."

Qi Xin, a researcher at Beijing's Academy of Social Sciences, says that younger, richer people are moving into Beijing's center, while older, poorer residents move out.

He also explains that, for most of the second half of the last century, China's cities didn't really have neighborhoods based on income levels. The state decided where everybody lived.

"At that time, people did not have the freedom to choose their homes," Qi says. "Everyone belonged to work units, and that is what determined your work and life."

Qi says that in recent years, Beijing's population has been growing at an unprecedented rate of more than 10 percent a year.

But like other great cities, Beijing has always been able to absorb and assimilate the newcomers.

So just as there's still plenty of pizza in Manhattan, I'm not too worried that I'll have to go to the suburbs just to buy a plate of dumplings.