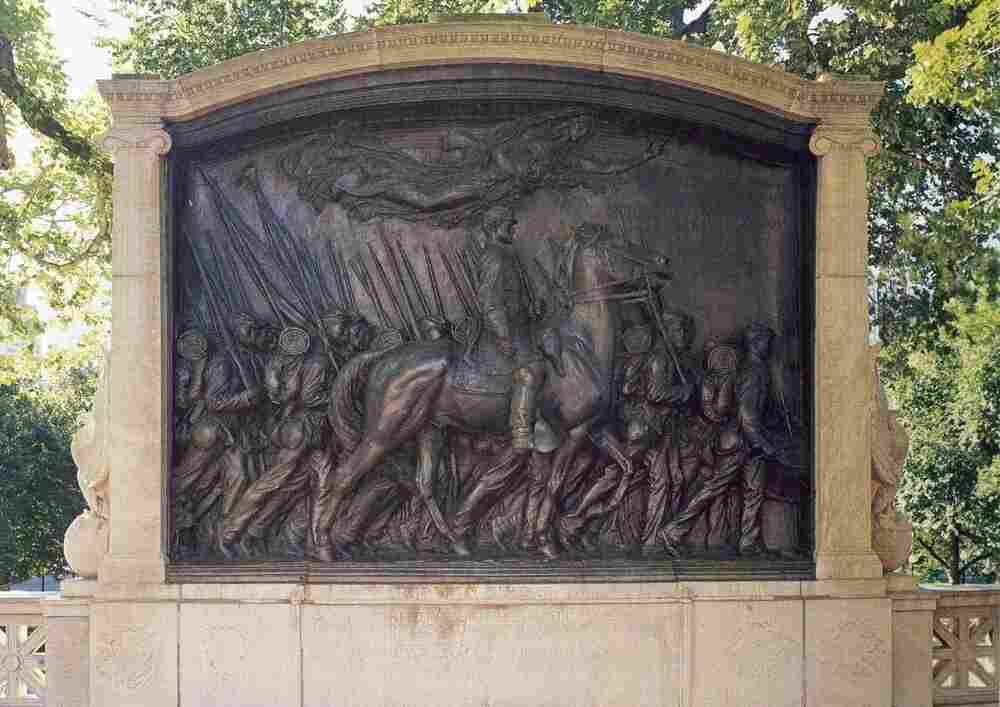 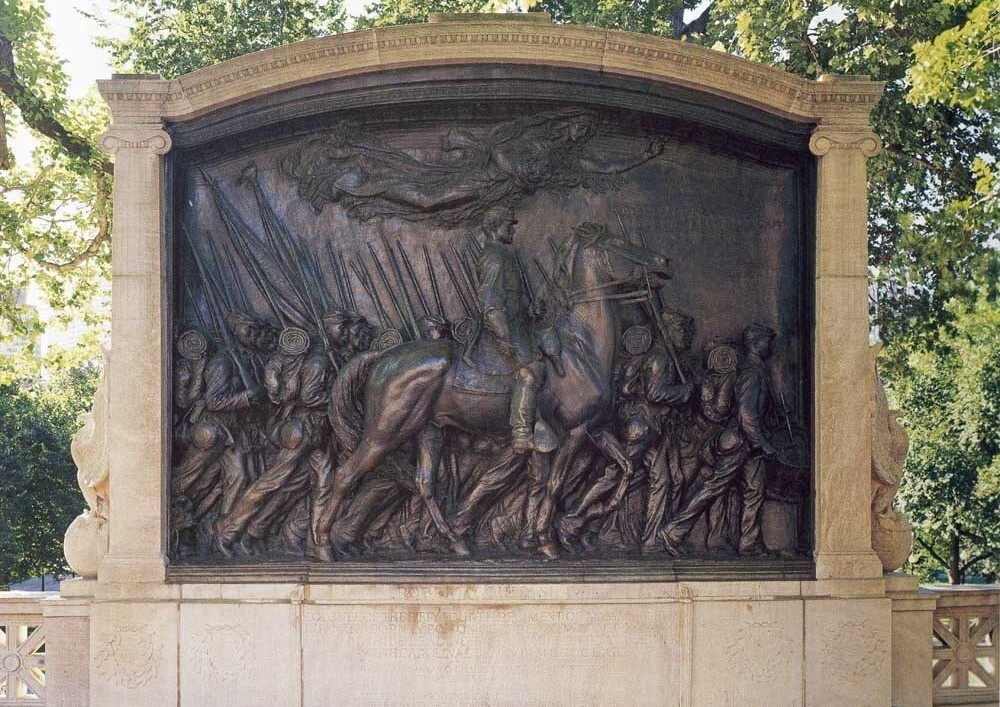 Boston's Shaw Memorial sits at the corner of Beacon and Park Streets.

The Shaw Memorial, by American sculptor Augustus Saint-Gaudens, stands 11 feet by 14 feet, like a giant bronze diorama, on the corner of Boston Common. In it, 40 or so black soldiers march to war alongside their white colonel, Robert Gould Shaw, on horseback.

The statue memorializes the first African-American volunteer infantry unit of the Civil War, the 54th Massachusetts Regiment, which was crushed 150 years ago Thursday in a battle at Fort Wagner in South Carolina.

"It shows in their stance, in their eyes, their pride, and it shows them marching out of Boston for what they know is going to be a sea change in the history of their generation," says Beverly Morgan-Welch, executive director of the Museum of African-American History in Boston.

The Men Had To Be Part Of It

In the 1989 film Glory, Massachusetts Gov. John Andrew, abolitionist Frederick Douglass and Shaw's father introduce the watershed idea of a regiment of black soldiers. The Shaw Memorial is also cinematic — it has the kind of movement you'd expect to see in the frame of a movie, says Henry Duffy, curator of the Saint-Gaudens National Historic Site in Cornish, N.H., where the 19th century artist lived and worked.

Another mammoth Shaw Memorial rises up from the estate's well-groomed grounds. In the front, the procession is led by a drummer, but half the drum is outside the frame of the picture. In the back, the last soldier's legs are cut off. It gives you a sense that there's more happening both in front and behind.

The meticulous Saint-Gaudens trained in Paris. He was already world famous when a committee in Boston commissioned him to make a monument in 1883.

"He was originally focusing just on Col. Shaw," Duffy says, "and it was Shaw's parents who told him, 'No, if you're going to do a monument to our son, you have to include his men, because he was dedicated to his men and the men have to be part of it.' "

Recruiting black soldiers was strategic and symbolic during the Civil War. The carnage was far worse than expected, and the Union needed more men. President Lincoln's Emancipation Proclamation, which took effect in January 1863, enabled newly freed slaves to join. Shaw, the son of a wealthy Boston abolitionist, chose to fight with the 54th at Fort Wagner rather than command from the sidelines. Six hundred men stormed the fort; 272 died. Shaw, just 25 years old, was the first to fall, making him a hero to his surviving men and the rest of the Union.

Duffy says he thinks the colonel's sacrifice inspired Saint-Gaudens to the point of obsession. He was supposed to complete his commission in six months — instead he took 14 years.

"It haunted him," Duffy says. "I think he just couldn't get it out of his mind."

African-Americans And The Civil War

Even after installing the first sculpture in Boston, the artist continued to tinker with other versions for three more years. Finally, he stopped with the one at his home in New Hampshire.

"I think, like Shaw himself, Saint-Gaudens had his eyes opened," Duffy says. "He had never had much to do with black people, just like Shaw, so that when he had to do this he was faced with having to, for the first time in his life, I think, look at people and not stereotypes."

Saint-Gaudens sat for hours with black models in his studio. The realistic faces he captured have stirred people from the moment the Boston memorial was dedicated in 1897, including writer Henry James, poet Robert Lowell and composer Charles Ives.

"[The] Shaw Memorial is the first time black Americans were ever portrayed in a work of sculpture as heroic," says historian and Bostonian David McCullough, "otherwise they were background. But here they are the heroes who would, many of them, pay the ultimate price."