Accessibility links
Wildfires Will Worsen, And Further Strain The Forest Service Over the past decade, fires in the American West have grown in intensity and size. "We're on a growth trajectory that is very scary," says one fire tracker. "And if we think it's expensive and dangerous now, we're just now seeing the very beginnings of how big this problem is going to be very soon." 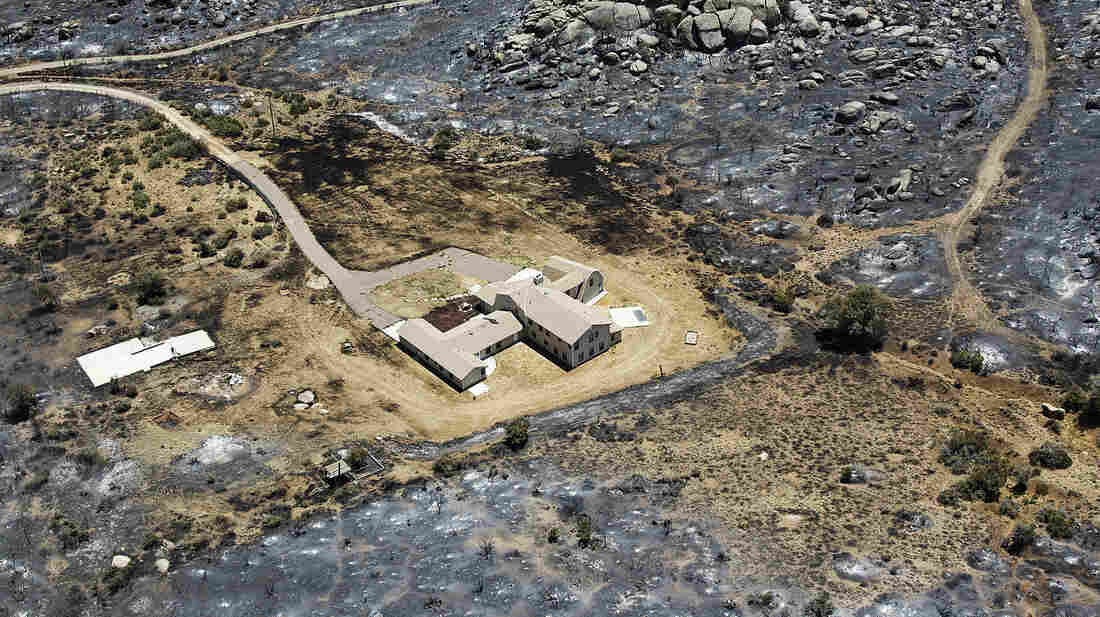 This aerial photo from July 3 shows Yarnell, Ariz., after the Yarnell Hill Fire burned through and claimed the lives of 19 members of an elite firefighting crew. Tom Tingle/AP hide caption 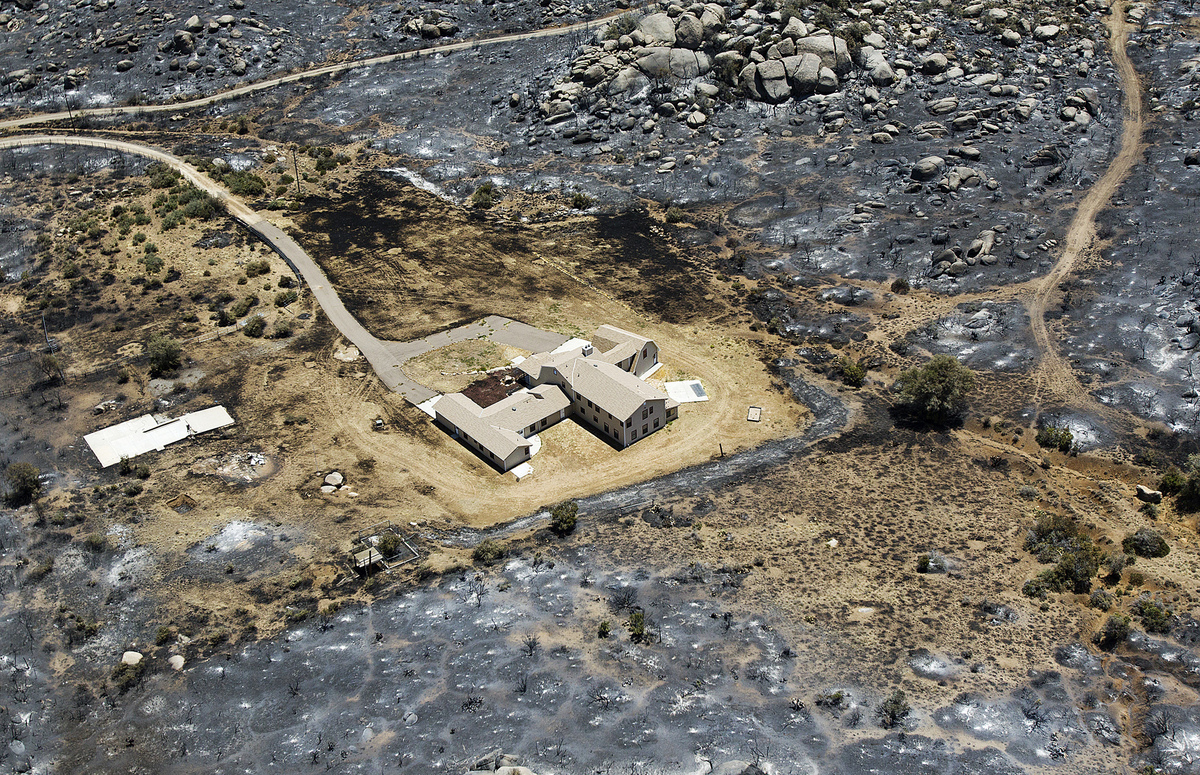 This aerial photo from July 3 shows Yarnell, Ariz., after the Yarnell Hill Fire burned through and claimed the lives of 19 members of an elite firefighting crew.

The deaths of 19 firefighters near Yarnell, Ariz., this summer have focused a lot of attention on just how bad wildfire has become in the West. And research predicts the situation is going to get worse.

Over the past decade, the region has seen some of the worst fire seasons on record. In addition to lives lost, the fires have cost billions in terms of lost property and in taxpayer money spent fighting the blazes.

First, he says, "the fires are twice as large, they're burning twice as long, and the season is starting earlier and ending later." Second: More homes are being built right next to national forests, and when those forests burn, firefighters have to defend those homes.

The fires are twice as large, they're burning twice as long, and the season is starting earlier and ending later.

And Rasker, who is the executive director of Headwaters Economics, noticed that when it's unusually warm, things get worse. In Montana, when it's just one degree warmer than average, 35 percent more land burns. That costs money.

"The really interesting thing is that when the average summertime temperature is just one degree Fahrenheit warmer, the cost of defending these homes doubles," he says. Rasker says these numbers are similar in California and Oregon.

He notes that about 84 percent of the private land around national forests is open to development, versus 14 percent of surrounding land that's already built up with housing developments, resorts and vacation homes. With an improving economy, and no restrictions on where people can build, he's worried.

"We're on a growth trajectory that is very scary," he says. "And you know, if we think it's expensive and dangerous now, we're just now seeing the very beginnings of how big this problem is going to be very soon."

Already, the firefighting portion of the Forest Service's budget is higher than ever. "In 2012 [the share of budget] was over 47 percent," says David Cleaves, the service's climate and fire expert. That's tripled over the past decade or so.

Cleaves says it's not a crisis now, but "economically, and in a policy sense, you could call it a crisis in the future." That's because more money that goes to firefighting means there's less money available for prevention.

"We're burning many times as much acreage as we burned in the past," says Elizabeth Reinhardt, assistant director for fire management for the Forest Service. "And also we have many times more large fires. So when you have individual fires that cost $30 million and $50 million and $10 million, then if you just have a few more of them, all of a sudden you're gobbling up your budget." 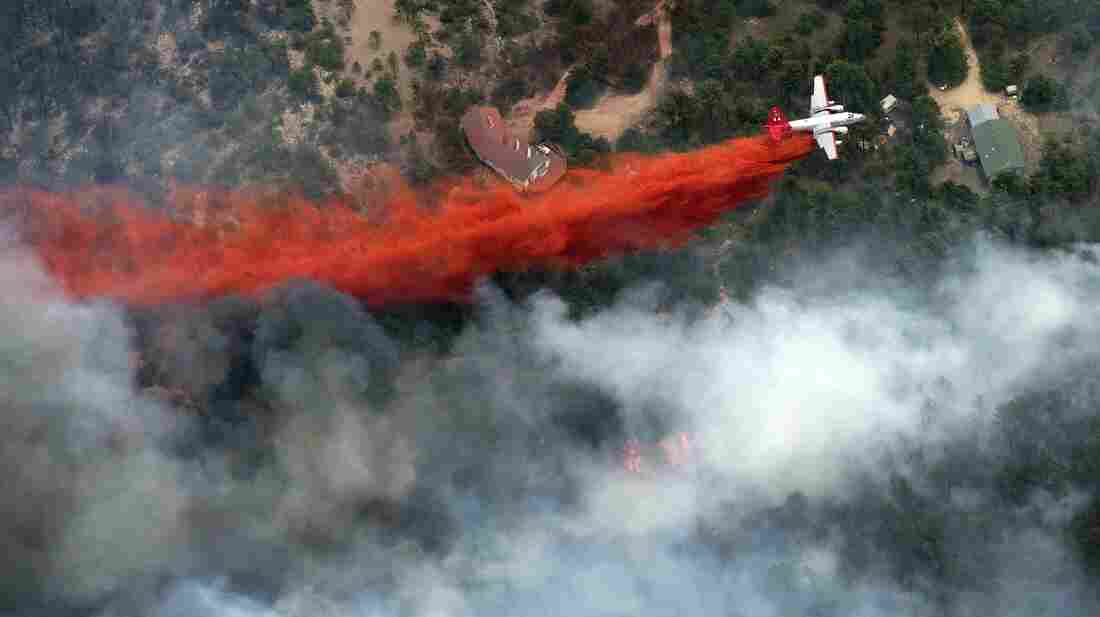 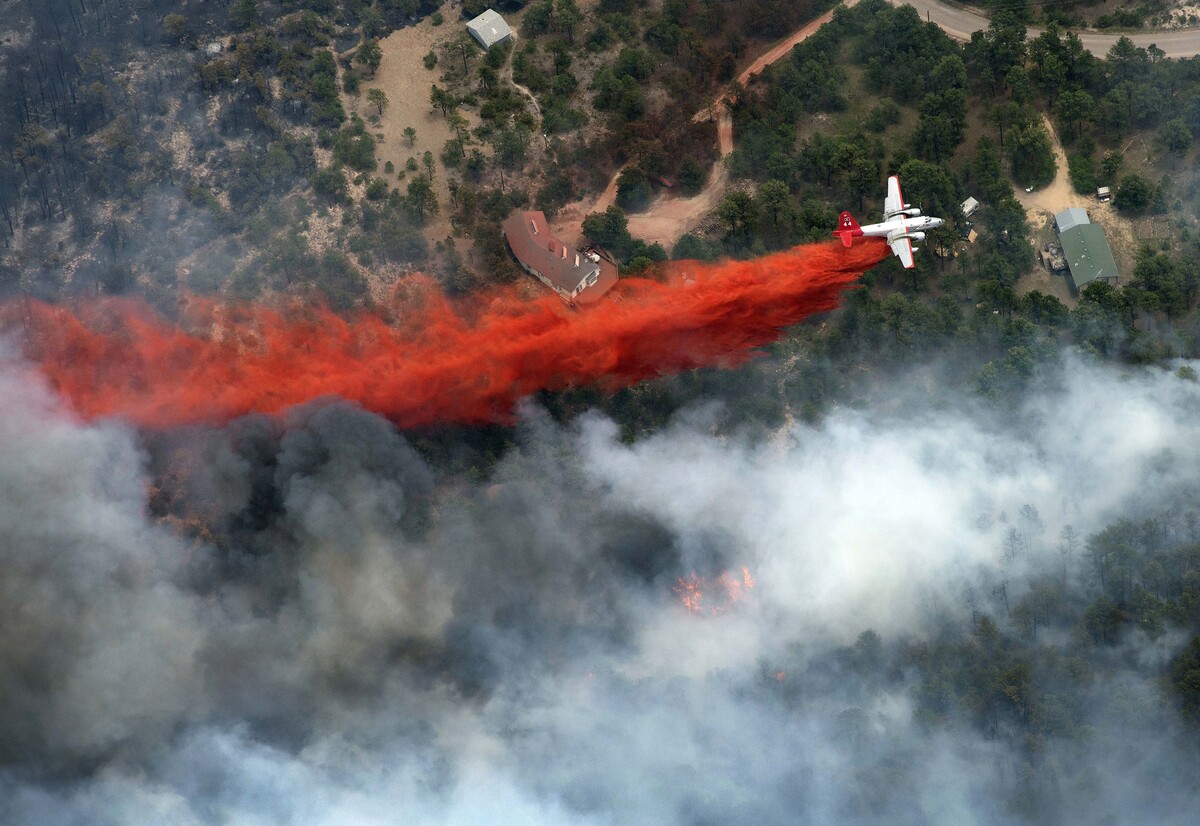 An aircraft lays down a line of fire retardant between a wildfire and homes in the dry, densely wooded Black Forest area northeast of Colorado Springs, Colo., on June 13.

Nowadays, the U.S. Forest Service has less money to spend on trimming back or burning undergrowth and trees to prevent bigger fires in the future. Estimates put the area of forest that needs fire prevention work performed on it at over 200 million acres, but the service is only able to treat about 3 million acres a year.

One solution is to let some natural fires burn longer instead of putting them out right away. That gets rid of built-up fuel, and it's cheaper than mechanically thinning forests or doing prescribed burns. But this tactic isn't popular with homeowners nearby.

"So many of the places where we have fire are near where people live," says Reinhardt. "Or, say it's early in the fire season and you have months of fire season ahead of you, and you just don't feel like you can take the risk of having a big fire out there in the backcountry."

And climate scientists don't expect things to improve on their own. Over the past century, average global temperature has gone up more than one degree Fahrenheit. Scientists say climate change is likely to keep pushing temperatures up.

Climate scientist Anthony Westerling explains that in the West, heat dries up the land. Think of a bathtub, he says. "The more you warm it up, the more the moisture is leaving the bathtub. It's coming out as steam off the top." When combined with drought, high heat increases the "vapor pressure deficit" — the potential the atmosphere has to suck moisture out of the ground. Under those conditions, trees and grass and bushes turn into dry tinder.

Westerling works at the University of California in Merced but he's been watching the Rocky Mountains a lot. He says spring is coming earlier, and it's hotter. Many forests there are near their heat and drought limit.

A decade of wet weather could turn things around, he says, but he adds that computer models show a rockier long-term trend. "By the time you get to mid-century in the northern Rockies, temperatures in most years and droughts in most years are far more extreme than the most extreme historical events."

And that will mean more firefighting, especially if people continue to build homes and subdivisions in fire-prone regions. 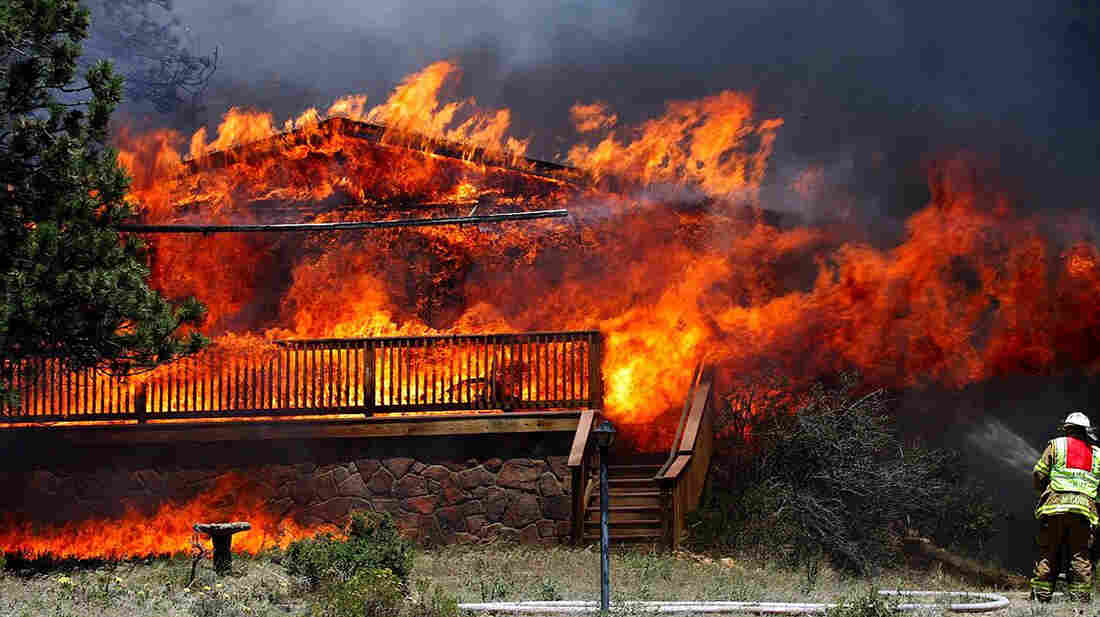 Fire consumed a home in Estes Park, Colo., on June 23, 2012. This fire claimed as many as 21 structures. Darrell Spangler/AP hide caption 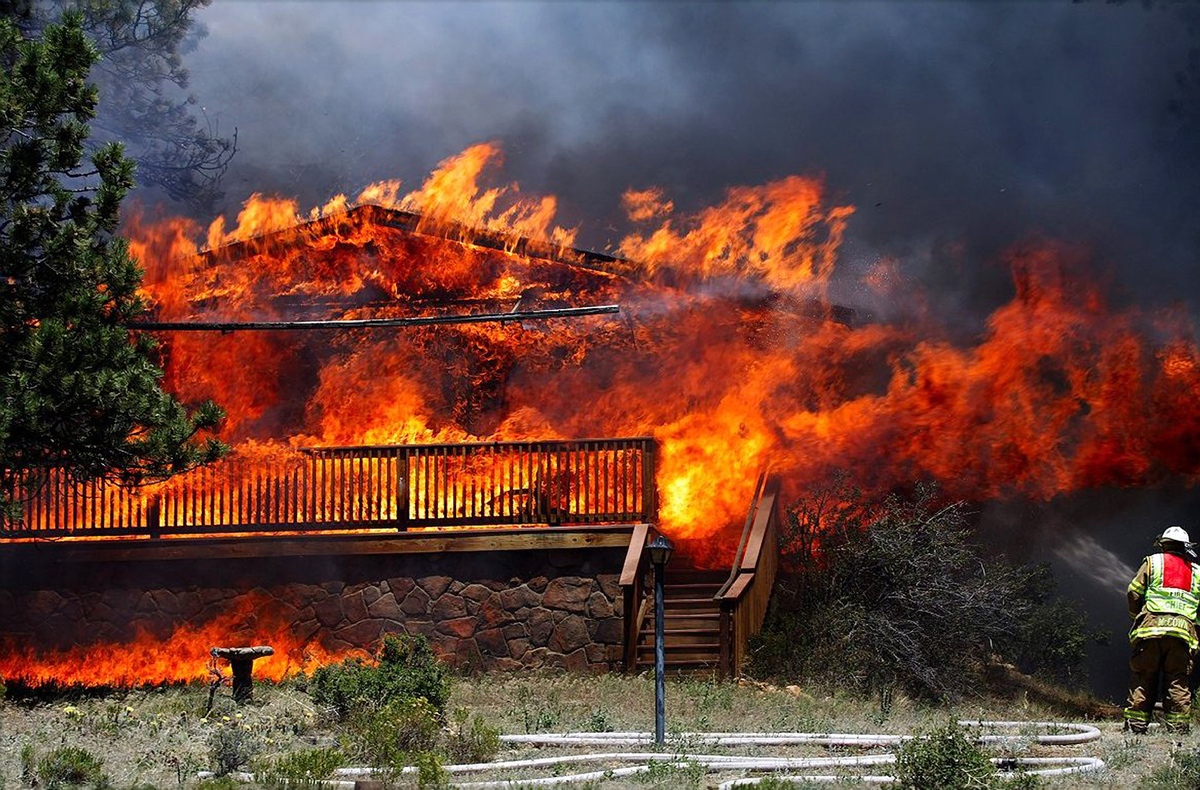 Economist Ray Rasker says that's likely to continue if communities and developers who decide to build are not paying for their fire protection. "They don't bear the full cost of that decision," Rasker says. "The cost is borne by the federal taxpayer, by the rest of us."

Instead, he says, "part of the calculation should be whether the local government can afford their share of the firefighting costs." If they can't pay, he says, then they shouldn't allow more development in fire-prone areas.

And Rasker says there are ethical as well as economic reasons to limit development near forests — the lives of firefighters are at stake.

"It's a tough thing to see people go in, to have to risk their lives" to defend structures in towns that have been evacuated, he says. "Empty structures."