Accessibility links
A Comic-Con Diary, Day Zero, Part II: A Man Waits For A Batmobile On Preview Night Correspondent Glen Weldon orients himself in the convention center and fights every instinct he has by striking up conversations with strangers. 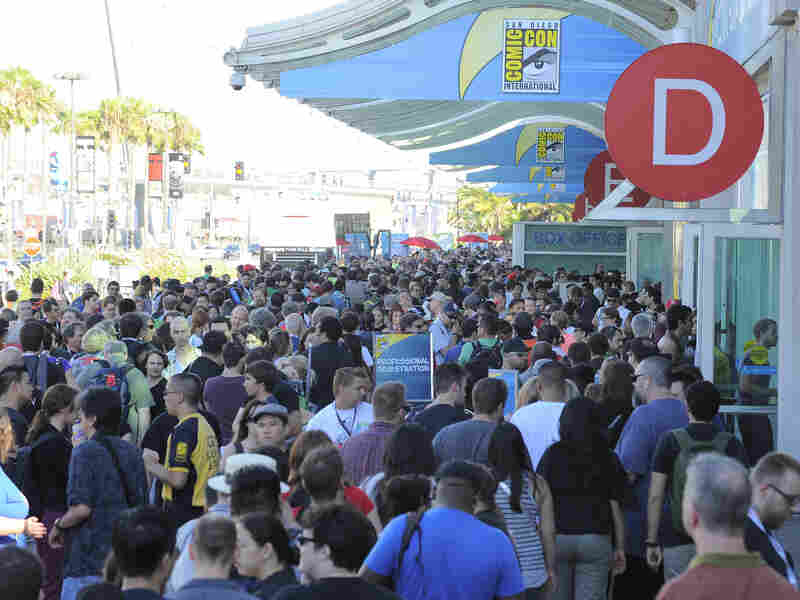 Fans wait in line to get into the Preview Night event on Day 1 of the 2013 Comic-Con International Convention on Wednesday in San Diego. Denis Poroy/Invision/AP hide caption 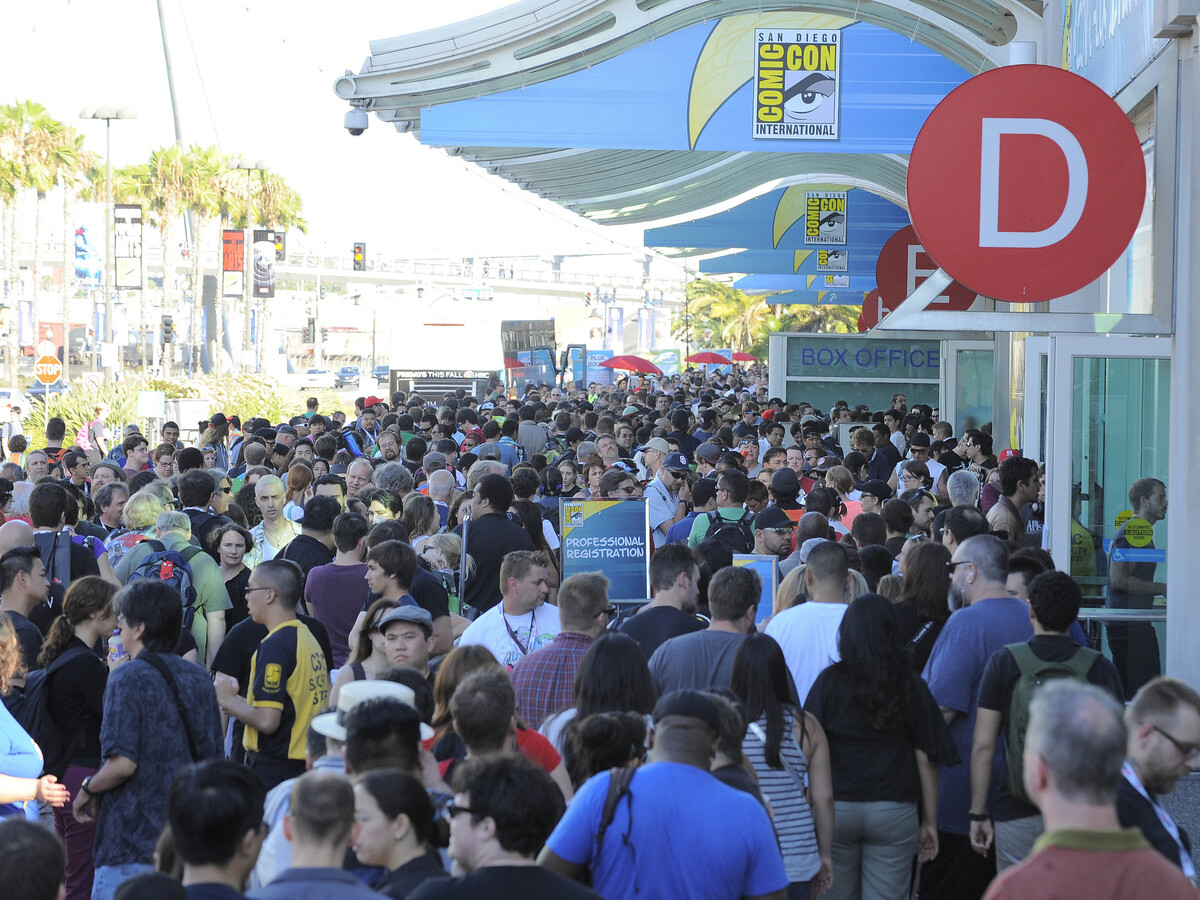 Fans wait in line to get into the Preview Night event on Day 1 of the 2013 Comic-Con International Convention on Wednesday in San Diego.

Monkey See contributor/longtime nerd Glen Weldon is headed to San Diego Comic-Con. He's filing periodic updates from one of the largest media events in the world.

I am a 45-year-old man standing in line for a toy Batmobile.

The line begins at the Entertainment Earth booth in the 2300 section of the con floor, wraps around a dining area where pre-exhausted families listlessly chew pizza at one another, doubles back and extends down the convention center, bisecting no less than 10 aisles, past the Small Press Pavilion (whose residents regard us line-standers warily), past Webcomics, to end in the mist-shrouded recesses of the 1300 section.

I have been standing in this line for the past 45 minutes. Though I don't know it yet, I will be standing in it for another hour. During that time, no less than 10 passersby approach me with worried, searching expressions, to ask me either (or, often, both) of the following breathless questions:

"Is this the end of the line?"

"What is this line for?"

But I get ahead of myself. This is supposed to be a straight-ahead con diary, and we left off at:

11:30 a.m. PT: Arrive in San Diego. Our friends from Miami, JC and L, just got in, too, so we share a cab to the hotel. From the cab window, San Diego is a sun-blasted, sun-pummeled, sun-felonious-assaulted huddle of low houses. It reminds me of mainland Miami, but drier, less disquietingly fecund.

12:30 p.m. PT: Lunch at the hotel, which is across the bay from the Convention Center. We catch up with JC and L. They ask me what the plan is. I show them the SDCC app, the panels I've highlighted. But they can see it in my eyes: I have no idea.

1:30 p.m. PT: Both F and JC scored a daypass to the convention tomorrow, but L is here to relax and spa. She and JC leave to explore Coronado, F has to do some work, and I do a bit of housekeeping: answer some dayjob emails, a back-and-forth with Weekend Edition Sunday producer Barrie Hardymon about the logistics of a possible con report, and a lot of charging various devices.

2:45 p.m. PT: Text Maggie, who's hanging out at the Marriot next to the Convention Center, letting her know I'm grabbing a water taxi and heading over.

3:30 p.m. PT: The right dock. The right water taxi. I am sweaty and pink-faced. More than baseline.

I share the short trip across the bay with Tracy, a friendly, matter-of-fact woman from Minnesota. "This your first time?" she asks. She doesn't have to say "Comic-Con" here, and she knows it. "Yup," I say. She turns to the couple beside her, whom she's just met. "He's a virgin!"

OK, let's be clear: Gross. But I manage to keep my grimace an inner one, as I'm fascinated by the woman in the couple, a pretty, tiny-nosed blonde in huge sunglasses whom I take to be a hopelessly out-of-place Real Housewife on a spa vacation. The glitter's a bit much, I think, uncharitably. For daytime. But then I put it together. She's the X-Men's Emma Frost, the White Queen.

"The glitter was HIS idea!" she says, patting the medicine-ball-sized deltoid of the brawny dude rocking a Venom tee beside her. "You know, because she turns to diamond?"

It's Tracy's second time. Her advice is stuff I've heard elsewhere, but it's hearfelt. "The big panels are gonna be Game of Thrones, Breaking Bad – because it's the last season – and Dexter – because it's the last season." (Based on many subsequent conversations, I'd add the Veronica Mars movie, the second Captain America movie, Joss Whedon's SHIELD television show and Catching Fire to Tracy's list.) If I want to see any of those, she tells me, I'll need to camp out, because they don't empty Hall H between panels, and people who get a seat first thing don't leave. "Not that I blame them," she says, and means it.

This year, she's not bothering much with Hall H. It's the small panels that are the most engaging and worth it, she says. She knows that now.

3:41 p.m. PT: The water taxi pulls up. Text Maggie. She texts to meet her at the reception desk. Boy, I think, this technology makes logistics easy. Whatever would people do without it? <---- (FORESHADOWING.)

3:50 p.m. PT: Maggie Thompson is ludicrously cool. She has been coming to Comic-Con for years (this year, she's blogging for SDCC). The show floor won't open until 6:00, so she shows me around the Marriott, pointing out the cheapest place for coffee and the hotel bar (where many deals, and several drunks, have been struck, if the stories I've heard are to be believed). She explains the layout of the convention hall. She is incredibly helpful and patient with me, wise about the way the show runs, directing my attention to little-used entrances and exits for navigating the crowds more nimbly. She explains everything.

Literally. Everything. "Now you see that sign hanging there above the hall saying EXIT ONLY?" she asks. "That means you can't go down that hall."

Maggie Thompson is a comic book legend. She is also, not for nothing, a mom.

5:15 p.m. PT: Maggie introduces me her friend and colleague John Jackson Miller, a writer who runs comichron.com, an incredibly useful website that definitively tracks comics trends and sales data. I consulted it often in writing my Superman book. I record a brief interview with John about the rise of nerd culture, during which it becomes very clear to me that I need to talk to him a lot more.

6:05 p.m. PT: The exhibit floor opens. Maggie walks me around, showing me the general breakdown of the floor map: Back issue comics dealers here, big publishers there, collectibles over here, video games down at the end, etc. She introduces me to Jackie Estrada, who administrates the Eisner Awards, and introduces me to several other people, taking unvarnished delight in doing so.

6:30 p.m. PT: The floor is crowded. Very crowded. Certain sections are growing impassible, due as much to the people themselves as it is to the enormous official Comic-Con tote bags they carry. Well, I say "carry." The bags this year come with two straps that go over the shoulder so the more fashion-conscious among us can wear them like capes. They extend out past the person. One gets jostled only to turn to see Adam West and Burt Ward staring back at one, or the Teen Titans, or ... for reasons ..., Kevin Bacon.

But here's the thing: The jostling, when it happens, is gentle, and always – ALWAYS – followed by a sincere apology. My people, we are conscious of personal space, and we see its invasion as a breach that must be remedied. And there's something else, too. Maggie puts it this way:

It's true. This is a convention, the largest convention of any kind I have ever attended. I do not associate exhibit floors with inner peace. I've been to trade shows where even the booth bunnies are po-faced. But everyone here is grinning. I'll get into the demographic breakdowns of attendees later, but for now I'll just say: Lots of teeth.

"They want to be here," Maggie says. "They've been planning it for months, and now they've finally made it." Maggie is an enthusiast. She enthuses. But she's not wrong.

6:45 pm. PT: Maggie has gone off to stand in a long line for a "CON-EXCLUSIVE!" dolphin hand puppet of the kind used by the character Pam on the show Archer. (That it a sentence that no one in all of human history has heretofore written.) She is doing this for her son Stephen, because she is a mom.

I am half the floor away, in a wholly separate line, for a "CON-EXCLUSIVE!" toy Batmobile – the classic version from the 1966 television show. This is where you came in.

Look: Nerds rationalize. It's what we do, we can't help it. So here's my rationalization, if you're curious: I had decided, when I signed the book deal for the next book, which deals with the character of Batman, that to celebrate – and to inspire me as I wrote — I would scour e-Bay to find the Batman Talking Alarm Clock I had as a kid. (More about that clock, and my search, can be found here.) But finding one that still talked proved difficult.

So, instead, this: After all, it was the '66 Batman television show is what got me into comics. Whenever F and I go on road trips, we start by quoting the West/Ward dialogue that would send them roaring out of the Batcave to meet Commissioner Gordon (ME: "Atomic batteries to power. Turbines to speed." F: "Roger. Ready to move out.") So instead of a clock, it'll be this big plastic Batmobile that'll sit on my desk as I write this next book.

As I wait in this line, I think of Maggie. I know she's chatting happily away with her fellow line-standers, because she is, after all, her. And as much as people tell you that standing in lines is part of Comic-Con, they don't mean "standing in line staring glumly at your phone as you inch closer and closer to your goal." Which is to say: They don't mean "Wait in Line Like Glen." They mean, "Wait in Line Like Maggie."

So I, fighting 45 years of practiced reticence, start talking to strangers.

The guys ahead of me are waiting not for the Batmobile, but for some robot action figure thingy I've never heard of, because kids today with their raccoon coats and their phonebooth-stuffing and their goldfish-swallowing.

The woman behind me is hoping for the Doctor Who tin. When the talk turns (weirdly, unbitten) to Lost, the booth staffer in charge of line management chips in enthusiastically (let the record show she agrees with me, not with the two robot enthusiasts). The talk bubbles on (BUBBLES, I say!) as we near the front. The booth staffer sending people to various registers looks me in the eye and thanks me – sincerely, it seems – for waiting. In response, I do something that surprises me. I shrug.

"No problem," I say, having stood in line for two hours for the opportunity to plop down 60 bucks for a chunk of extruded plastic. "My pleasure."

8:15 pm PT: I explore the floor some more, and attempt to call (and when reception proves too iffy, text) Maggie. I realize I should have written down the number or name of the booth she'd gone off too in search of dolphin puppet booty. There is no way I will run into her. So I walk, and watch, and, uncannily, talk.

9:00 pm PT: F, JC and L text me that they're in the Gaslamp District near the convention center, preparing to sit down to dinner. The floor is closing, so I text Maggie in vain one last time, in case she wants to join us, and head over to the restaurant.

The streets of San Diego are lanyard-y tonight. Con attendees spill out of restaurants and bars. What I assume to be two particularly enthusiastic cosplayers turn out to be restaurant hostesses in skimpy outfits, twirling capes to entice passersby in for a whiskey.