Accessibility links
A Secret Folk Music Holds Firm In China's Badlands One of China's hidden musical gems is to be found in the country's hardscrabble northwest, where farmers and the descendents of river boatmen belt out lusty, foot-stomping, knee-slapping folk songs. 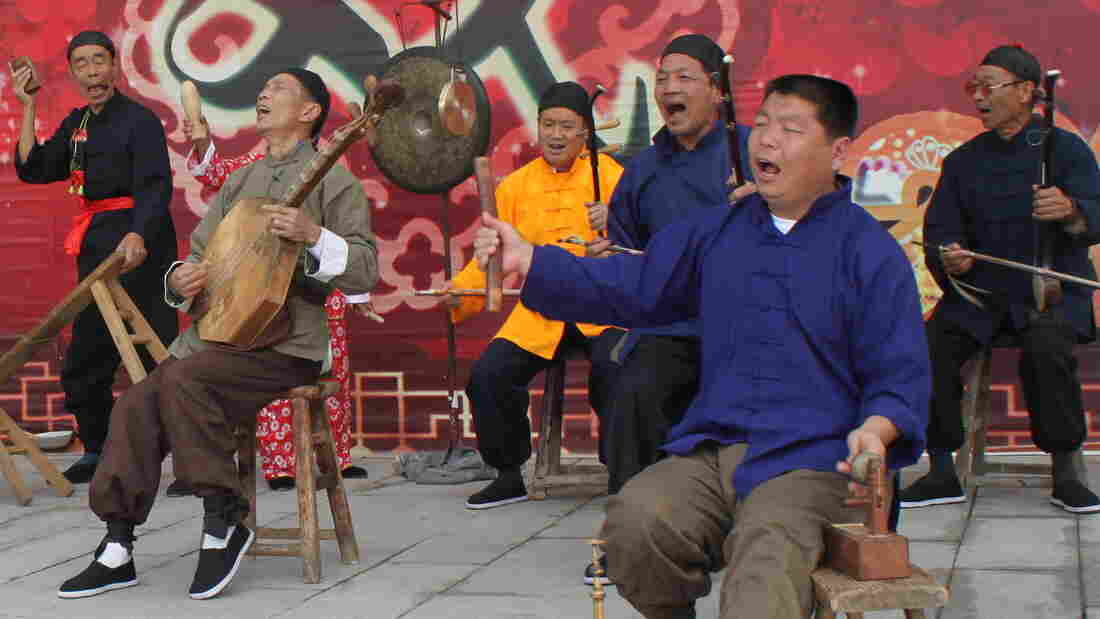 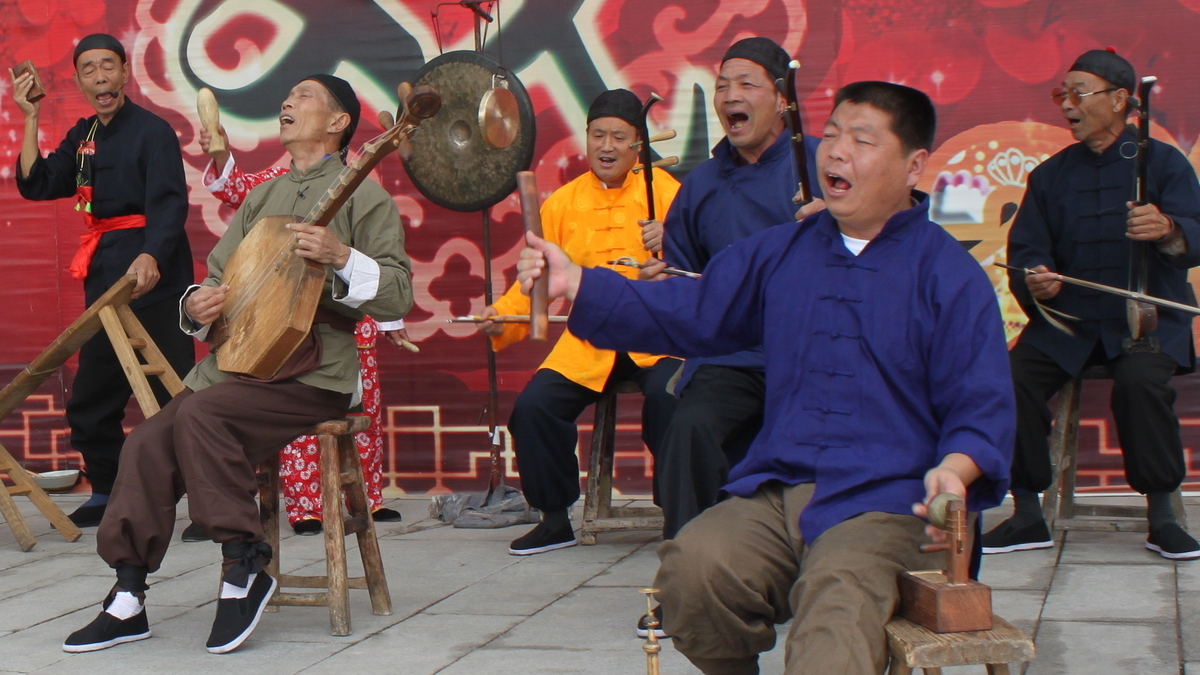 "According to my knowledge," he said, "a lot of people don't like this kind of music because it's too noisy and too loud."

That may be so. The country's airwaves are full of syrupy pop tunes and prissy patriotic odes. But generalizing about musical tastes is risky business, especially in a country of 1.3 billion pairs of ears.

To find a homegrown musical alternative to conventional musical tastes, just travel to the edge of northwest China's Shaanxi province, on the middle reaches of the Yellow River, on the southern edge of a vast plateau of dusty badlands.

By the standards of wealthier southern China, the area is poor, dry and coarse.

On a recent afternoon, local musician Zhang Junmin joins his fellow band members on a hill behind his village. They're there to perform a style of music called Lao Qiang, which is roughly translatable as "Old Tune." Zhang says it's been passed down in his family for centuries.

If you didn't know better, you might think you were hearing the hard-knock life story of a Mississippi Delta bluesman.

Zhang says his father was close to illiterate. Zhang himself was too poor to attend school. He farmed the land part of the time, and played music the rest. He says he learned his art the traditional way.

"If I couldn't pick up a tune on my instrument, my papa would get mad," Zhang recalls in a raspy voice. "He'd come over and slap me upside the head. That slap would wake me up, and then I'd get it. If he didn't slap me, I wouldn't concentrate. And I wouldn't get it."

Traditionally, Lao Qiang musicians would accompany a puppeteer, who would tell stories from behind a screen. It wasn't until a couple of decades ago that the musicians came out from behind that screen and performed on their own, in full view of the audience.

The origin of Lao Qiang music is a matter of some dispute, but Zhang says the most plausible explanation he's heard is that it is descended from the chanteys of boatmen on the Yellow River (lots of "hey's" and "ho's") as they rowed barges laden with grain to the imperial capital at Chang'an during the Western Han dynasty, roughly 2,000 years ago.

Zhang's band launches into a rip-roaring tune about combat among warlords during the third-century Three Kingdoms period. The string section saws away with such gusto that horsehairs come flying off their bows. A percussionist thrashes out a furious beat on a wooden bench. The musicians holler the song's lyrics in unison, as Zhang thrusts a banjo-like instrument called a sanxian into the air like a rock star. He says it's the stories that give the music its brash spirit.

"Even in the coldest days of winter, we perform for five minutes and we're sweating," he says. "It's mostly the combat scenes. They just fire us up. It's not like we're trying to get fired up. We just can't help it!"

Beijing-based music critic Wang Xiaofeng says that when he heard Lao Qiang for the first time about 18 years ago, it reminded him of heavy metal: very physical and somewhat operatic. He adds that Lao Qiang is way outside the mainstream of Chinese popular musical taste, which he argues has two main qualities.

"The first is that its melody is very easy to remember," Wang says. "The second is that its rhythm is very simple, like a disco beat."

Wang says this may explain the Chinese preference for the sort of light Western music (remember Hooked on Classics?) you often hear in public spaces throughout China. While the nation's tastes are diverse, Wang says, Chinese aesthetics generally value moderation and balance.

While many Chinese have gradually become aware of Lao Qiang music, the art form remains pretty obscure. Zhang Junmin says he's doing everything he can just to keep his family's tradition alive.

"We don't want this music to be buried in the ground," Zhang says. "It belongs to society, and we should find a way to pass on our legacy. That's my dream."