Accessibility links
Kristen Wiig: That Loud, Strange Lady Isn't Me The star of Saturday Night Live, Bridesmaids and now Girl Most Likely joins NPR's Melissa Block to talk about lost characters, loud characters, and how shy she is in real life. 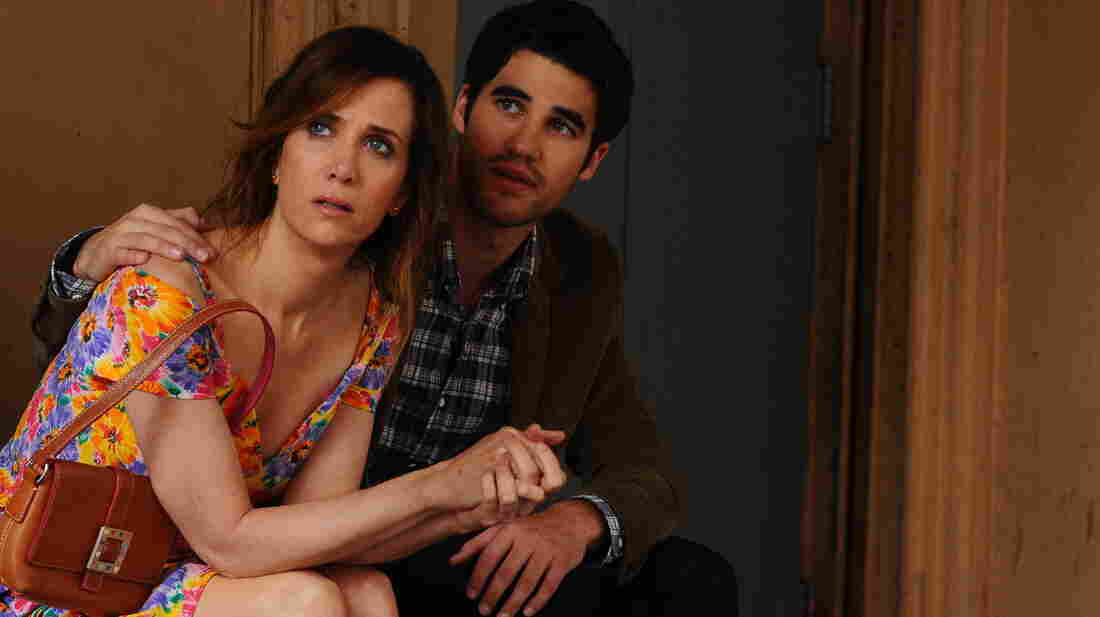 Kristen Wiig (with Darren Criss) stars in Girl Most Likely as a hard-luck case who learns how to reboot her disastrous life after she's forced to move back in with her mom. Nicole Rivelli/Roadside Attractions hide caption

For seven seasons on Saturday Night Live, actress Kristen Wiig made us laugh — laugh hard — with her off-the-wall, over-the-top characters, from Sue, the woman who loved surprises a little too much, to the unnervingly exuberant Target Lady.

In 2011, Wiig had a breakout film role in the bawdy hit comedy Bridesmaids, which she co-wrote. She's back now in Girl Most Likely, as a failed Manhattan playwright who loses her job, her boyfriend and her apartment, and has no choice but to move back in with her embarrassingly free-spirited New Jersey mom, played by Annette Bening.

Wiig joins NPR's Melissa Block to talk about lost characters, loud characters, and what's coming up in her career.

"I always like stories like that, where it starts off as this person has seemingly nothing, loses everything, and throughout the course of the movie, in getting her life back, finds something that she didn't really know about herself. I always gravitate towards things that have very specific, sometimes weird characters."

On the lessons of improv

"I had no acting experience really at all, and a friend of mine told me to go see the Groundlings. ... I don't know, something — I mean, I always wanted to perform, and I guess reading a script in front of people, and acting something out, was always very intimidating to me, because I felt like there was a right and wrong way to do it. And with improv it really is your personality; you make all the decisions, and so in some ways you really can't do it wrong."

On being a shy person playing big, loud characters

"I'm actually not very good at public speaking [or] talking in a big group — even socially — as myself. Playing a character is much safer to me. So getting up and someone telling me to do a monologue as a character, I could talk for 10 minutes. But if someone told me to get up and be myself and talk, I would have a much harder time with that. ...

"I think a lot of people assume that you are what you do. And that happens to me all the time when I do interviews, or even when I just, like, go to a dinner. I think people think I'm going to throw on a wig and start tap-dancing on the table."

On auditioning for Saturday Night Live

"It was the most terrifying thing I've ever done to this day. Because I knew it would just be me on stage for five minutes, and they were very clear that you had five minutes. And I bought I stopwatch when I got to New York so I could time my audition. Because I was afraid that a big curtain was going to fall down or something in five minutes."

On the story behind Target Lady

"She was something that I had done at the Groundlings. I liked how happy she was about pretty much everything. I was actually in a Target — I forget, somewhere in the Valley — and the woman who was at the register, she just said something in a voice that struck me. She didn't do the things that the Target Lady does. ... I kind of embellished a lot."

On her plans for the future

"I hope to direct. The last handful of things I've done have been pretty dramatic, which has been really fun for me. It's really fulfilling to me in a way I never expected — I think it's because I came into acting through comedy.