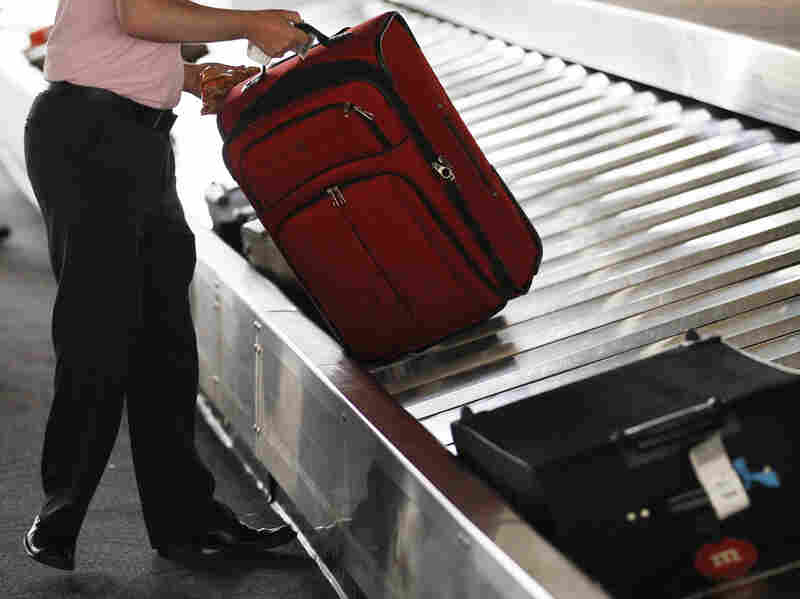 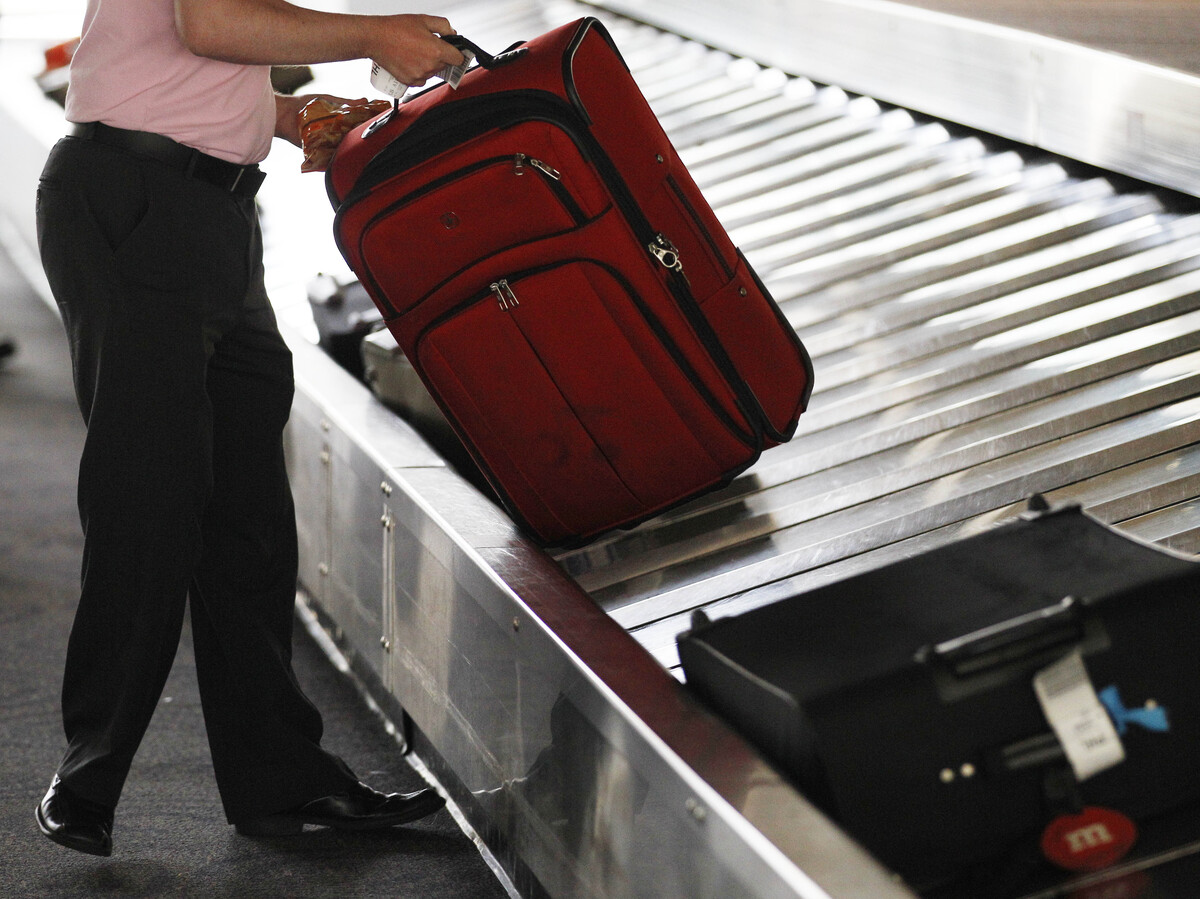 A traveler collects his bag from a luggage carousel in the Philadelphia International Airport in 2011. Baggage fees have helped financially desperate carriers stay aloft.

Even if passengers aren't eager to celebrate, airlines are. The fees, born in 2008, helped financially desperate carriers stay aloft as the U.S. economy was spiraling down.

"That was a watershed year that scared the bejeezus out of the airline industry," said Mark Gerchick, an aviation consultant who has just released a book, Full Upright and Locked Position. Even as ticket sales were sliding, jet fuel prices were shooting to historic highs.

"Suddenly, everyone's thinking changed in the industry," he said. Rather than try to provide a single price for comprehensive service, airlines started charging fees — typically $15 per bag — to boost revenues.

Today, fees are not only the norm; they are heading higher still. Checking a bag now costs $25 to $35 on most domestic flights, and roughly three times that amount on many overseas flights. And on any given flight, just about everything comes with a price tag — from 2 more inches of legroom to a can of Coke.

One carrier, Denver-based Frontier Airlines, has announced it soon will begin charging up to $100 for a single carry-on bag for any customer who fails to book through the company's own website.

Having people book directly online eliminates payments to travel agents and "is a big cost saver for us," Frontier spokeswoman Kate O'Malley said. And, of course, it also generates yet another stream of revenues.

Now United Airlines is trying a new approach, offering annual "subscription" fees to allow customers to prepay a year's worth of baggage fees, seat upgrades or airport club access. The plans start at $349 and allow you and your family to check up to two bags per flight.

Flying High And Low In 'Full Upright And Locked Position'

Gerchick said the ever-onward march of fees reflects the impact of a single idea that took hold in the summer of 2008. Carriers realized they would have to "unbundle" the air travel experience — charging passengers for each service, such as checking bags, changing tickets, getting a snack box and so on, he said.

Fees have allowed the airline industry to reshape its business model. According to the Bureau of Transportation Statistics, in 2012, U.S. passenger airlines collected $3.5 billion in bag fees and an additional $2.6 billion in reservation-change fees. That totals $6.1 billion in fees — and as luck would have it, airlines made a profit of roughly $6 billion. In other words, airlines just break even on flying their customers; they make money by dreaming up fees.

In this age of fees for everything, nudists may feel their lifestyle now makes more sense than ever; they're comfortable traveling light. But most people do need to bring along some clothes when they head out of town.

Gerchick says that need has set off a game between travelers and airlines. "It's like the 'Spy vs. Spy' cartoon in Mad magazine," he said. Passengers attempt to cram everything into carry-on bags, and airlines use sharp-eyed gate attendants to watch for "non-complying" bags.

The typical size allowed onboard is no more than 45 "linear" inches, that is, 22 X 14 X 9 inches in size, and no more than 40 pounds in weight. If a traveler tries to hoist a "non-complying" bag into the plane's overhead bin, she might be forced to pay a "gate bag fee" for having to check it belatedly.

That has a few people trying out "wearable luggage," i.e., loose jackets and vests that feature huge pockets. Rather than pack a bag, a traveler can stuff clothes, makeup, an electronic tablet and whatnot into the pockets of the puffy outfit and get onboard — without having to pay any bag fees.

However, a recent test of wearable luggage at Washington's Reagan National Airport taught one NPR journalist this lesson: Security guards will look very hard at anyone trying to get into the gate area while sporting a bulging vest.

Doesn't this sort of fee-avoidance effort — to say nothing of the fashion statement — take the fun out of traveling?

For some, yes, but most people seem to understand that they and the airlines are trying to outsmart each other, and they have come to accept the fees game as part of today's traveling experience, Gerchick said.

The latest customer polls reflect that acceptance. Passengers' overall satisfaction with air travel has risen to the highest level since 2006, according to the J.D. Power & Associates airline satisfaction study for 2013.

"With each year, passengers are increasingly more accepting of carriers unbundling baggage and other fees," Ramez Faza, a senior manager at J.D. Power & Associates, said in a statement.

Another recently released survey, called the American Customer Satisfaction Index, shows customers hate airlines' cramped seats but are adjusting to the other realities of today's air travel experience. In fact, satisfaction has risen for two straight years — a time when fees were sharply increasing.

Ironically, the improvement in customer satisfaction — to some degree — reflects the positive impact of higher fees on baggage handling, Gerchick said. Over the past five years, passengers have been cutting back on checked bags, which means airline employees are better able to handle their workloads, he said.

And since 2008, the biggest carriers have merged, leaving the airline industry more financially stable. That means carriers can afford to invest in new services that customers want, such as better luggage-tracking technology and more Wi-Fi on flights.

"It was considered outlandish when the airlines started charging fees five years ago," Gerchick said. "But now, it's a matter of routine — people have started to accept that it's the new normal. And for airlines, fees are a key component of revenues."