Accessibility links
In Nairobi, A Maasai Detective Pursues Elusive Justice Former journalist Richard Crompton set his first novel, a crime thriller, in a city that many still know as "Nairobbery." His protagonist, Detective Mollel, is a warrior for justice in a city that would happily settle for peace. 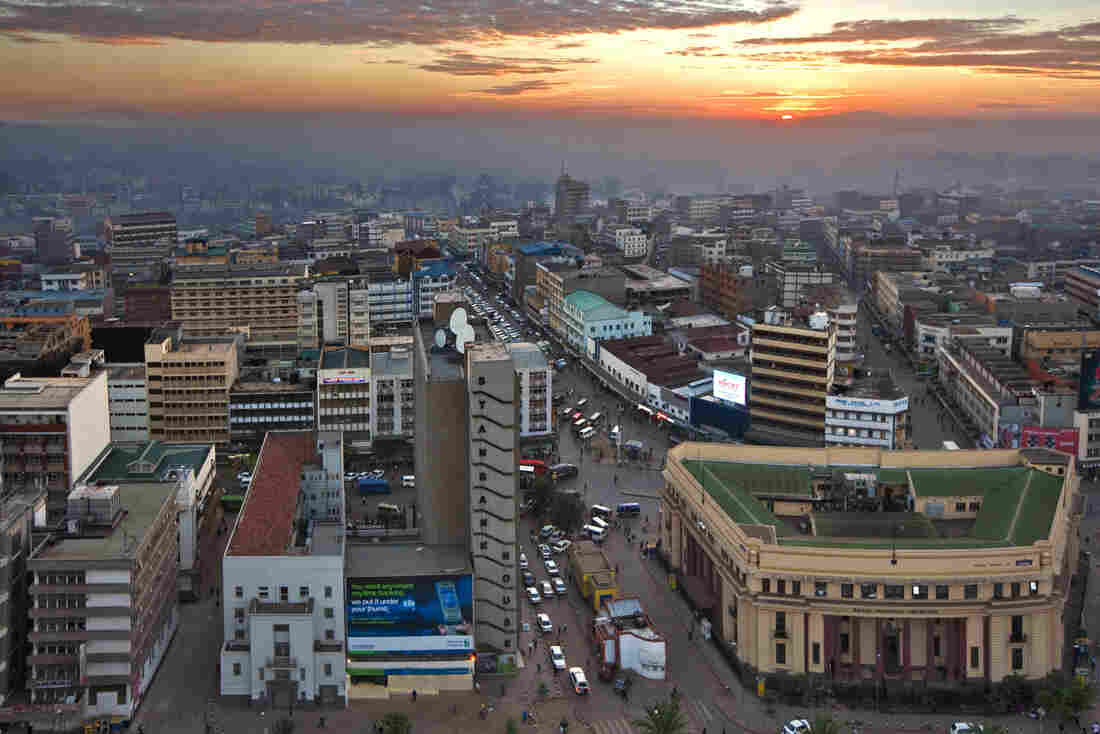 If not for his earlobes, Detective Mollel would cut a classic figure of the crime fiction genre: moody, obsessive and a widower estranged from his son. But Mollel is a Kenyan from the Maasai tribe and the flesh of his earlobes is long and looped, stretched since childhood to hang below his jawline. As Richard Crompton writes in his novel Hour of the Red God, the earlobes "are a mark of pride and warriorhood within Maasai circles, but an object of ridicule and prejudice elsewhere," especially on the urbane streets of Nairobi.

"Mollel was raised in a village — he was a goatherd — and he's worked his way up to become a Nairobi policeman," Crompton says. "And, bizarre as it sounds, a university-educated, white middle-class boy from England coming to Nairobi can also share some of the same experiences. We both viewed the city as neophytes, as newcomers."

Crompton even has his fictional detective move to Nairobi the same year he did, in 2006. But while Mollel came to seek a better life, Crompton came to seek a more adventurous one as Kenya bureau chief for CNBC. Through his job, Crompton witnessed some of the bloodiest tribal conflicts in Kenyan history during the weeks following the disputed 2007 presidential election. 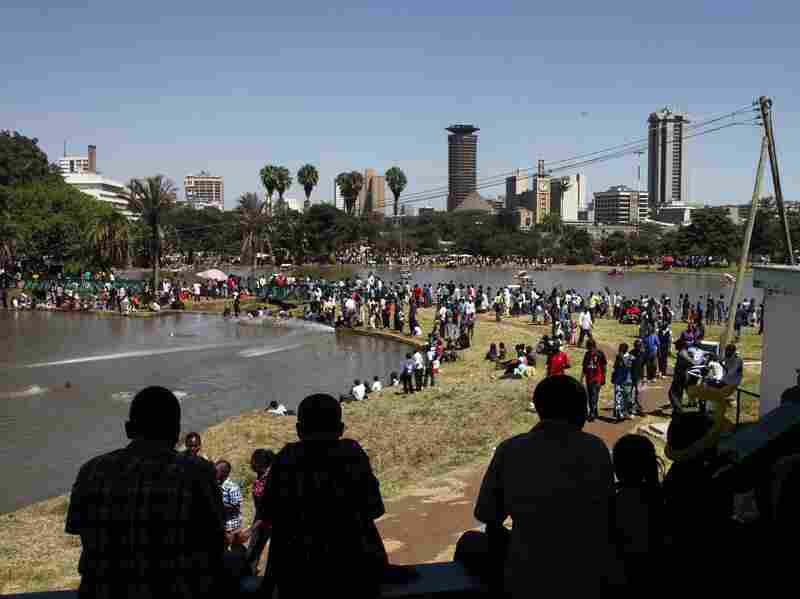 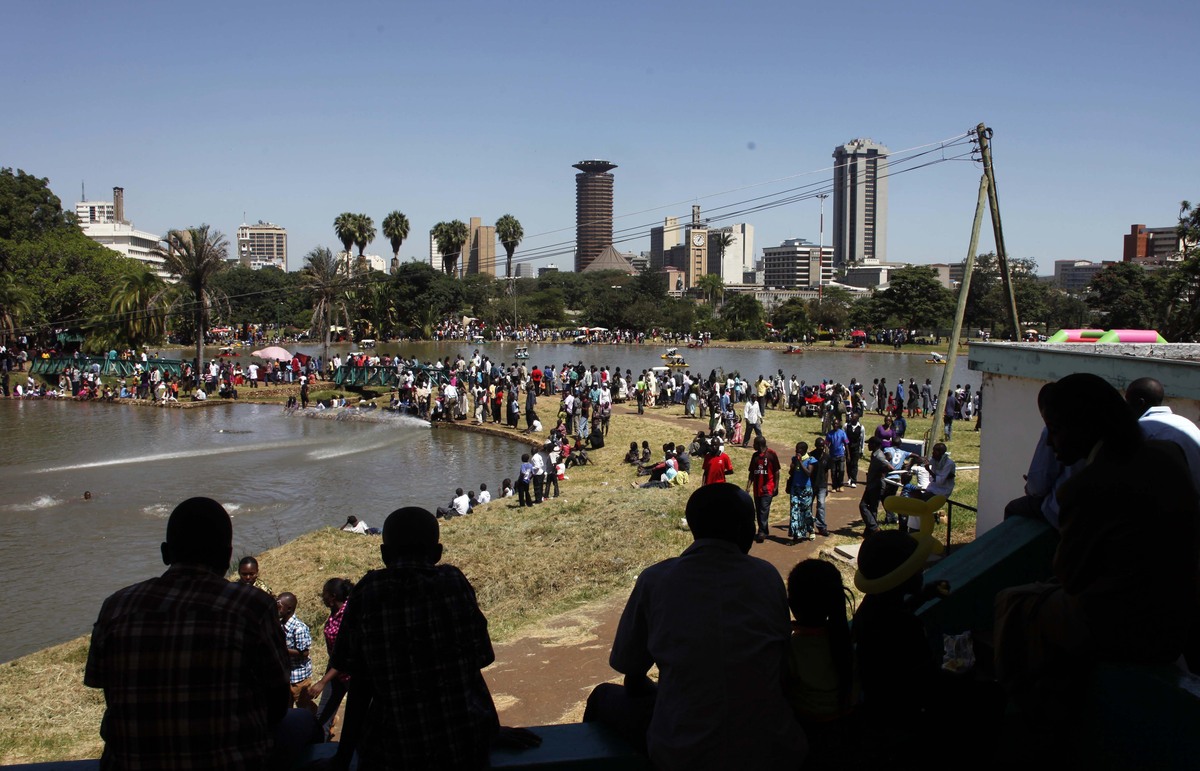 Back in 2007, Nairobi's Uhuru – or, Freedom — Park was commandeered by thousands of government troops.

"Because they knew that if there was going to be disruption, this is the largest open space that's close to parliament," he says. "This is where the civil society would gather. This would have been like the Tahrir Square of Nairobi."

Walking through the park, Crompton and I pass a father and son paddleboating in a pond, a field with kids playing soccer and couples catching a discrete midafternoon cuddle on blankets. It's a charming scene until we come to a culvert.

"This is very like the opening scenario [of Hour of the Red God], the drainage ditch where the body is found," Crompton says.

There's a Nairobi police slang word for a corpse flushed out of storm drains by heavy rain. The word is "termite," and the termite at the opening of Crompton's book is a beautiful young prostitute with tribal scars that show her to be, like Detective Mollel, from the Maasai tribe.

At the culvert, Crompton and I discover a different body — a naked man bathing in the muddy, stinky water.

"In a way, the smell is indicative of the underbelly of this city which can exist anywhere," Crompton says. "In fact, can we move away now? It's pretty repulsive."

We leave the naked man, just as Detective Mollel leaves the naked woman, and head to Koinange Street. By day, it's full of office workers; at night, it's Nairobi's red light district.

Even in these white-collar crowds it's easy to spot the Maasai. Ramrod straight and stick thin, they're often working as security guards, hired because of their tribal reputation for honesty. Maasai are the only citizens of this city who can walk around with traditional weapons and not be stopped by police.

"It's understood that if a Maasai uses their weapons for ill intent, that they will be ostracized and they will be turned out," Crompton says. "And their honor forbids them from doing anything like that." 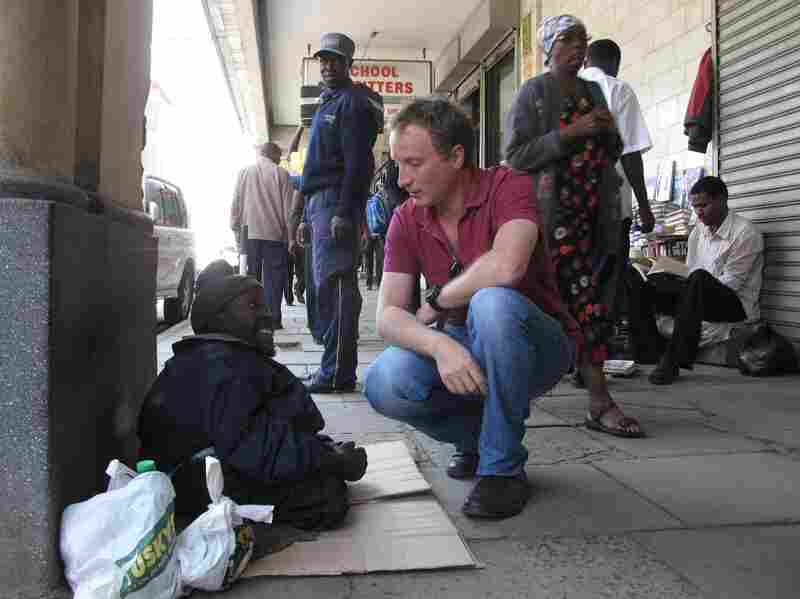 Richard Crompton stops on the street to talk to "George," a local supplicant and an inspiration for one of the characters in Crompton's first crime novel. Crompton says many of his characters are amalgams of people he met as a Nairobi journalist and resident. Gregory Warner/NPR hide caption 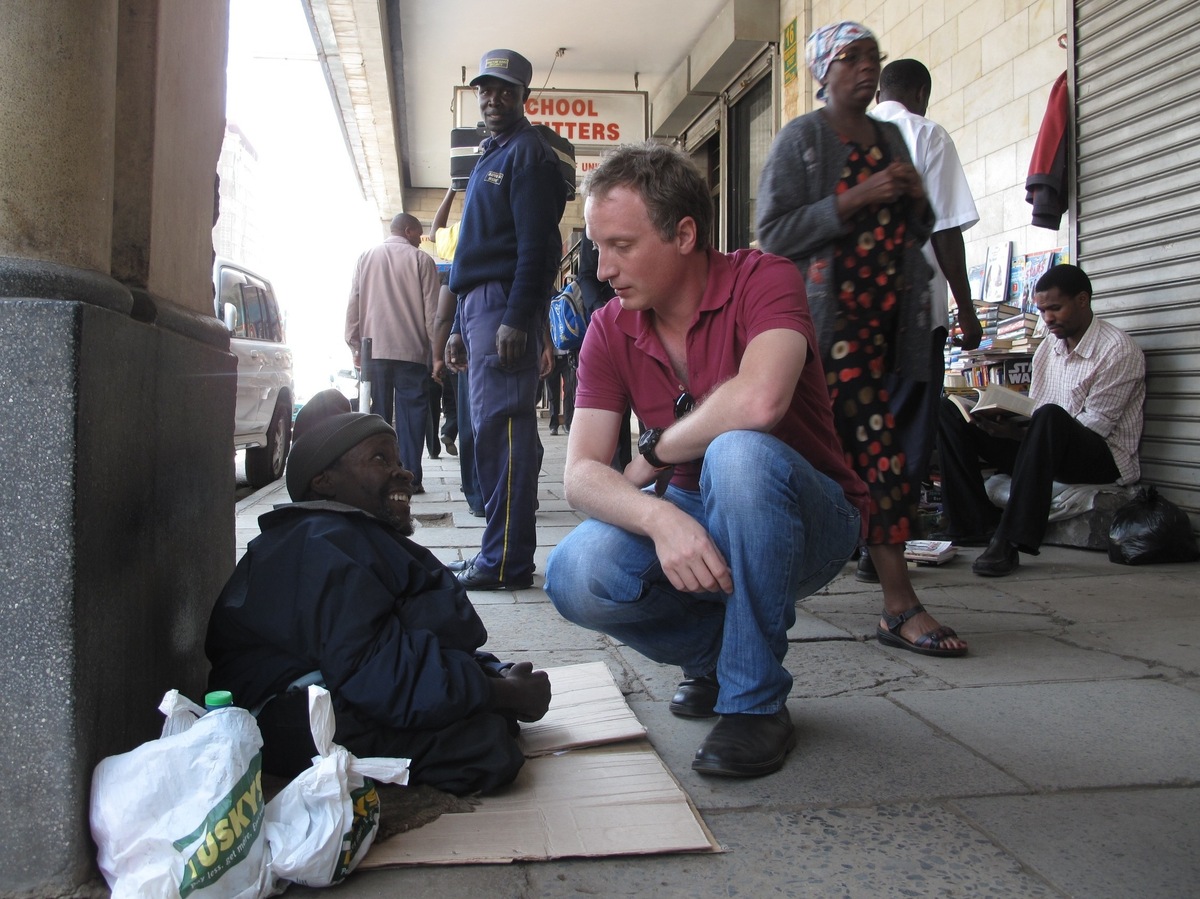 Richard Crompton stops on the street to talk to "George," a local supplicant and an inspiration for one of the characters in Crompton's first crime novel. Crompton says many of his characters are amalgams of people he met as a Nairobi journalist and resident.

Crompton's detective is an amalgam of people, including a Maasai man Crompton befriended when they both became new fathers at the same time, and an ex-policeman who guided him through the city's darker alleys.

"I was down in some of the more gangster-ridden areas at 4 or 5 o'clock in the morning when they really come to life. That's rush hour around here," Crompton says. "And I actually got word at one point, it got back to me, they said, 'If we see that mzungu down here again, that white man, his life is not going to be worth living!' So I made myself scarce at that point."

Detective Mollel also has his life threatened for being thorough when the dead girl's connected clues seem to implicate powerful members of Nairobi's political and business class. But as Mollel pursues her killer, his country braces for civil war. The book is set in the days before that stormy 2007 election that Crompton witnessed as a journalist. When he wrote Hour of the Red God, he wanted to explore a broader theme: the value of justice in the developing world. In this scene halfway through the book, Mollel has just uncovered a critical clue, only to be yanked off the murder case by his boss, Superintendent Otieno:

-- What about justice? croaks Mollel.

Otieno gives a sad smile. — Mollel, you're in the wrong country. The wrong continent. Don't you know there's something more valuable than justice here?

-- Peace. ... Justice is a luxury. Peace is a necessity. You want justice, move to some first-world state with sophisticated crime labs and DNA tests and judges who can't be bought off.

Mollel is a warrior for justice in a city that would happily settle for peace. And the British author in his adopted Kenyan city has profoundly mixed feelings about his protagonist. Living here has convinced Crompton that justice can be a luxury, a shiny principle imposed by the West that blinds us to more corrosive destabilizing forces.

So it's only at the end of the book that the detective's devotion to justice gets a kind of defense. In this scene, Mollel is closing in on the killer while racing to protect his own family as post-election riots engulf the city. His way forward is blocked by rabid tribalists threatening his home with machete-like weapons called pangas.

Mollel wants to fight them. He wants to grab a panga out of one of their hands and kill them all, slash them to pieces. This is what it takes, he thinks, even as his heart is pounding. This is what it takes to make the Red God rise up inside of you. When someone threatens your family, your child, and there's no recourse to law, no appeal to order, no one will protect you and no one will stand up for you and fight on your behalf. All you can do is kill.

If peace rates higher than justice, where is the recourse for human rage without strong institutions? With no place for justice, what peace can hold?

In the end, Mollel resists the primal urge, outsmarts the tribalists, rescues his family, unmasks the killer and lives on to fight for justice in Crompton's next book, Hell's Gate, due out in February.