Accessibility links
Teachers Hit The Books To Master New Education Standards School systems nationwide are scrambling to prepare teachers to implement new education standards known as the Common Core. In some cases, the standards, which lay out what students will be expected to know by the end of each grade, will require teachers to adopt new teaching methods. 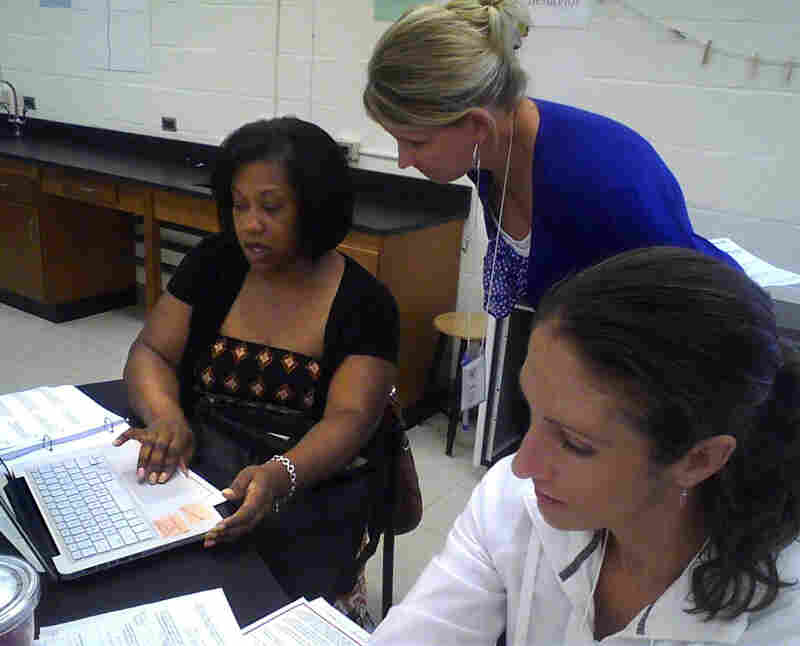 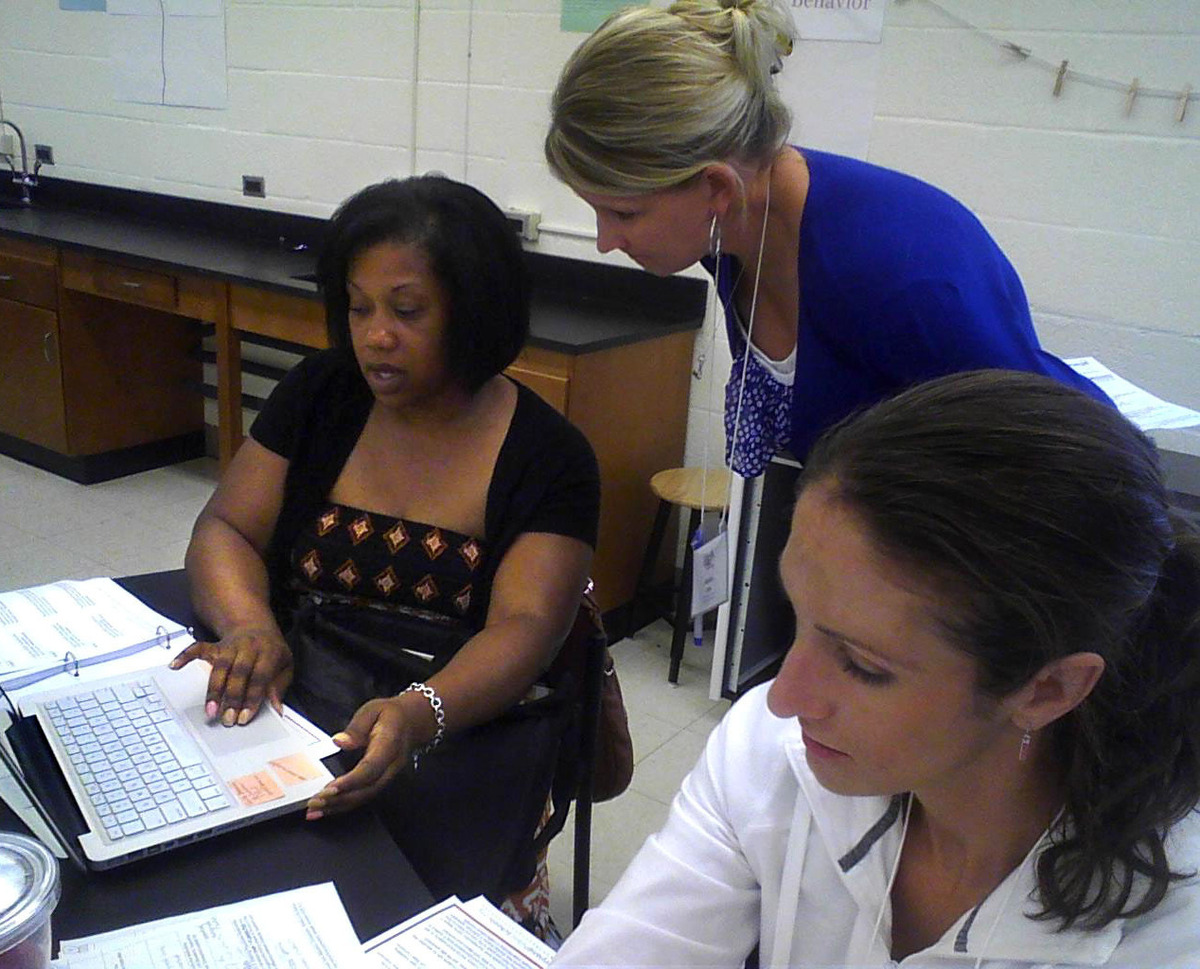 Teacher Karen Pate assists math teachers with Common Core materials in Baltimore. As in other states, Maryland teachers are attending trainings to prepare to implement the new standards this fall.

Almost all the states and Washington, D.C., are grappling with a big challenge as the new school year nears: getting teachers up to speed on the Common Core, a sweeping set of new education standards for English language arts and math.

The Common Core will soon apply to most of America's students from kindergarten through high school. The policymakers behind the Core know that it could fail if they don't help teachers make the change. So this summer, the state of Maryland has been hosting what it calls "academies" to do just that.

'Figuring This All Out Together'

Shannon Landefeld is an elementary school reading specialist in Maryland. But today, most of her students are older than she is. Landefeld is one of many "master teachers" the state has called in to help her colleagues work through the new standards.

"Common Core's new to everyone. We're figuring this all out together," Landefeld tells her teacher-students. "So there are gonna be stumbles and falls where there's misconceptions and people believe different things."

One of those misconceptions is that the Common Core standards tell teachers what to teach. They don't. Instead, they're benchmarks that lay out what kids should be able to do by each grade.

For example, the standards say a first-grader should be able to "write informative/explanatory texts in which they name a topic, supply some facts about the topic, and provide some sense of closure."

In most states, kids will be expected to read more deeply and more critically than ever before. And if they can't, they'll run into a buzz saw next year, when schools will administer the first Common Core-aligned tests.

Big Changes For Many Classrooms

At Maryland's summer academies, teachers are being taught new best practices for the classroom to ensure that their students are ready for those tests. And these best practices include some pretty big changes.

For older students who may be accustomed to reading quickly through a handful of novels, "now we're looking at maybe one or two long texts — we call them extended texts — and we'll dive very deeply into it," says Jill Oswald, another "master teacher" who has been teaching English to high school students for 18 years.

Another change, Oswald notes, is that rather than "front-loading the kids and giving them a lot of background [before starting a book], we let them discover the text, and then we kind of fill in blanks and answer questions as they need to."

In other words, teachers working through The Great Gatsby won't spend three days talking about the Jazz Age or F. Scott Fitzgerald's tortured past before opening the book. Instead, teachers are told to hold back at the start and let kids work through the text before helping them with biography and background.

Teacher Shannon Landefeld notes there's another big classroom change being ushered in by the Common Core: "Access to complexity regardless of reading ability," she says. "We're not saving complex texts for our advanced readers."

Think of it as the "deep end approach" to reading. Instead of asking students to read things teachers know they can handle, kids will be thrown into tougher material — and some will struggle.

Landefeld says she's drawn from the Core in reading Charlotte's Web with her elementary students. "At first glance, the children didn't understand a certain passage," she says. "But when I take them back and say, 'OK, we're just gonna look at this one paragraph, and we're gonna break it apart, and we're gonna take it step by step,' I was able to show them that after we did that, you just understood something that on a first read you didn't get."

For Some Veteran Teachers, More Of The Same

Sarah McMahan has been an educator for 13 years. She thinks the Common Core standards are a good thing and a definite improvement over the standards they're replacing. But, she says, "My concern with it is that it's going to become a foundation for very test-driven, test-centered teaching and learning."

Lebowitz admits that the idea of common standards is a good thing, and most of the teachers this reporter spoke with here at the Maryland training support it. But they're also tired of ideas that ask them to do a lot but last only as long as the politicians who created them.

So for the moment, these teachers become students again. They listen closely, take lots of notes, and they commit to the Core on faith that it will work — and that it will last.