The outlaw country and folk musician died Tuesday, May 17. We remember Guy Clark with a story from 2013. 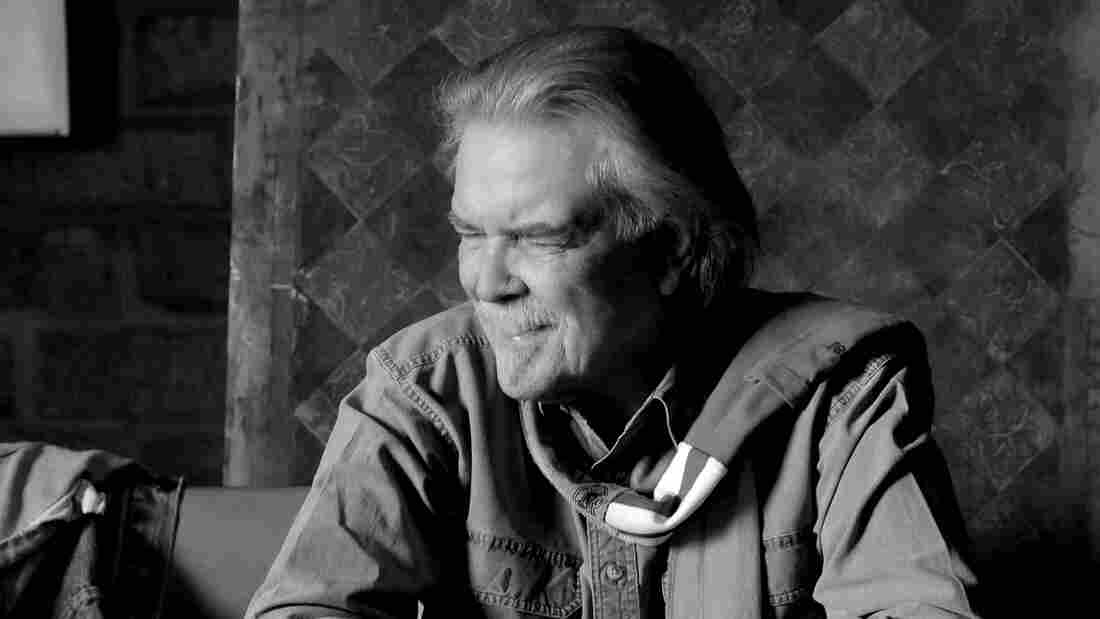 Born in Texas and settled in Nashville, Tenn., Guy Clark has mentored generations of artists, including Rodney Crowell, Lyle Lovett and Steve Earle — all of whom cite his keen editing skills and prize his stamp of approval. Jim McGuire/Courtesy of the artist hide caption 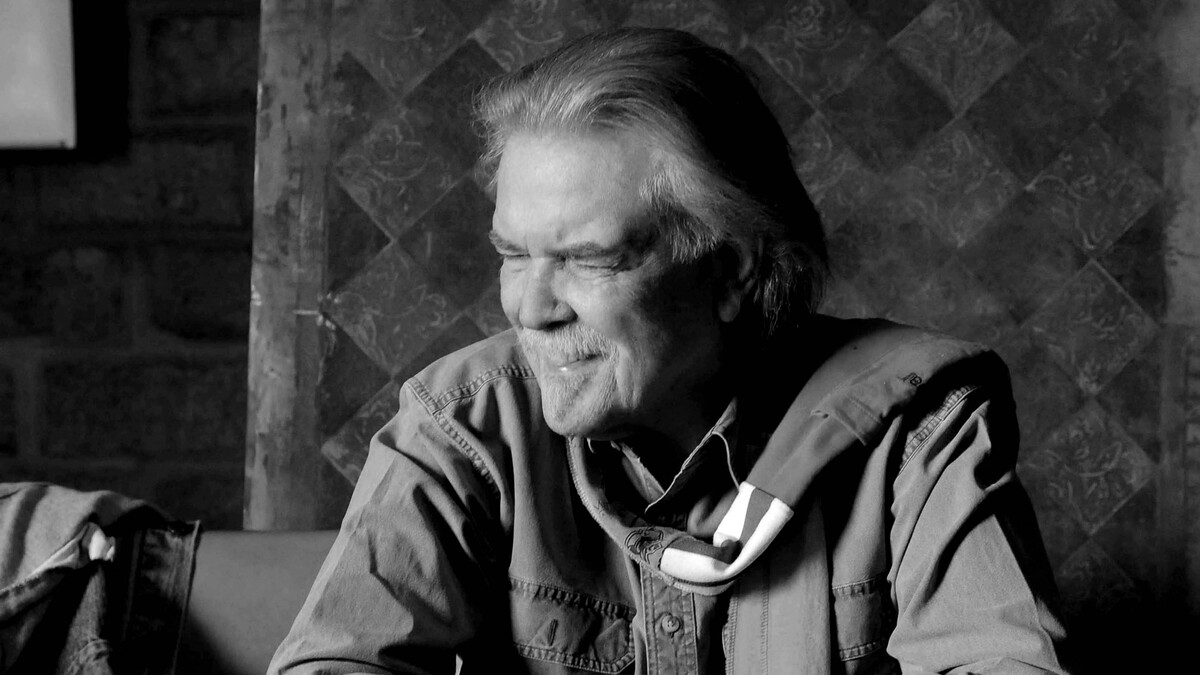 Born in Texas and settled in Nashville, Tenn., Guy Clark has mentored generations of artists, including Rodney Crowell, Lyle Lovett and Steve Earle — all of whom cite his keen editing skills and prize his stamp of approval.

If you want to learn how to write a song — one that's built to last, with vivid characters and images that plant you squarely inside a scene — listen to Guy Clark.

Songwriters who revere Clark will tell you he crafts songs with the same precision and attention to detail he uses when he builds guitars. But Clark has a simpler, blunter explanation, as he told me with a glint in his eye when I visited him recently at his home in Nashville, Tenn. 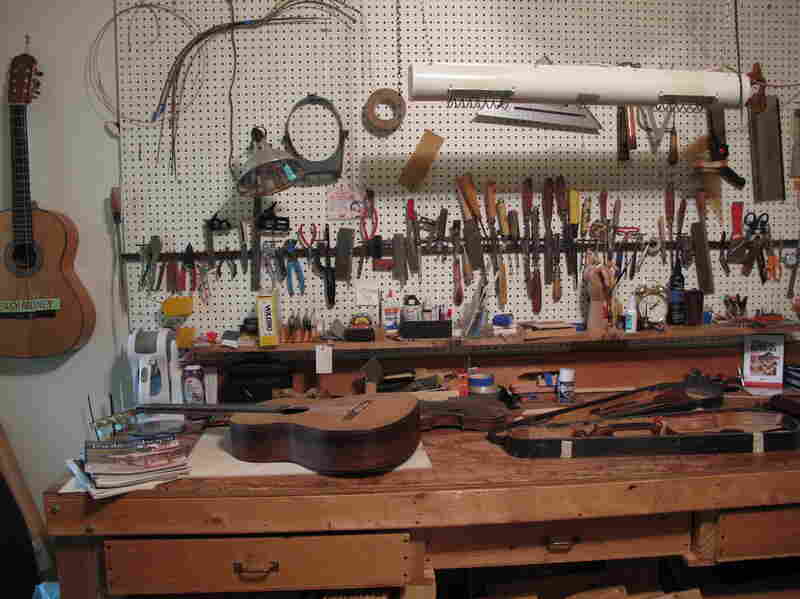 Tools line the walls of Guy Clark's basement workshop at his home in Nashville, where he still builds guitars. Jinae West/NPR hide caption 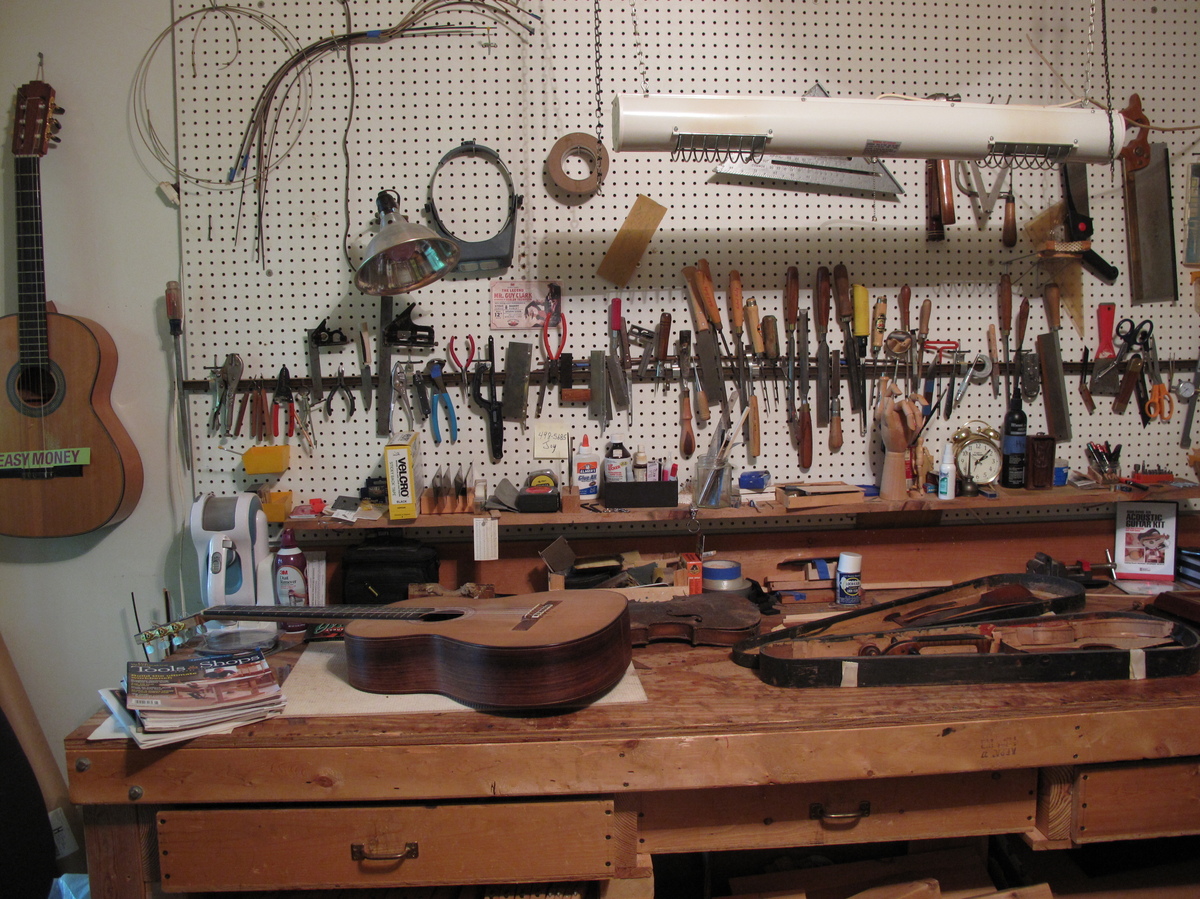 Tools line the walls of Guy Clark's basement workshop at his home in Nashville, where he still builds guitars.

I've been listening to and admiring Guy Clark songs for many, many years now: songs that make me feel I know the honky-tonk queen, wino or Texas wildcatter he's singing about.

Clark's first album, Old Number One, came out in 1975 and made true believers out of pretty much everybody who heard it. Among them was the Texas songwriter Lyle Lovett, who was in high school at the time. Now, he counts Clark as a close friend.

"In a big way, Guy's first record helped tell me what a song should, what a song could be," Lovett says. "A song that leaps to mind is Texas 1947: Immediately you're in the middle of a scene with a 6-year-old boy in West Texas, and you know something is happening. You're drawn in immediately, and you're waiting for that next line."

Clark is 71 now. He's a tall, imposing man with intense blue eyes; his hair's gone silver. He smokes hand-rolled cigarettes as we talk.

He's had health trouble in recent years: He has lymphoma and was treated with chemotherapy a few years back. He moves slowly now, unsteady on his feet, after two knee replacements and leg surgery.

"It affects your balance — just being able to do anything other than walk around with a cane and complain about it," he says.

Clark comes from the small West Texas town of Monahans. He made his name as part of the vibrant Houston folk scene in the late 1960s. He moved to Los Angeles to write songs, then got a songwriting deal. In 1971, he headed across the country.

"Without even thinking about it, I said, 'Nashville,' " Clark says. "You know, anyplace but L.A. And I knew I didn't want to live in New York, so — packed up the VW bus and moved to Nashville."

He's been in Nashville ever since. In the '70s, if you were a songwriter, you wanted to be sitting at the kitchen table of Guy Clark and his wife, Susanna: Townes Van Zandt, Steve Earle, Rodney Crowell and many others would gather around for guitar pulls and long boozy nights spent swapping songs. Crowell says Clark was the heart of that scene, the inspiration for lots of young writers — himself included.

"I had an audience of one, and that audience of one was Guy Clark," Crowell says. "If I could write something cohesive enough, powerful enough, strong enough, true enough that I could play it for Guy and look him in the eye while I'm doing it, then that's success. If he raised an eyebrow — or better yet, if he said, 'That's a good song' — then you could work off of that for six months running."

"It's hard to imagine the world of music without Guy, the world of language without Guy," Harris says. "He really embraces the human condition. There is no judgment in Guy's songs. ... You know that everyone has been on a rough road."

It's impossible to talk about Clark without also thinking about his late wife — a terrific painter and songwriter herself. Susanna Clark died last year after a long illness; she and Guy were married for 40 years.

On the cover of his new album, My Favorite Picture of You, we see Guy holding up an old Polaroid of Susanna. She's standing in front of a house in a letter jacket; her arms are crossed, fists clenched, her mouth firmly set.

"Townes and I were in that house, just absolutely, obnoxiously drunk — and she'd had enough. She just got up, put her jacket on and left," Guy says. "And that has always been my favorite picture of Susanna. From the moment I saw it that day, I had held on to it and saved it. 'Cause that was Susanna: 'Don't f- - - with me, 'cause you will lose.' "

Clark has remarked that when he's writing, what's not in a song is often as important as what is. A good example, he says, is a fairly new tune of his: "Rain in Durango," from My Favorite Picture of You, whose entire third verse he now considers unnecessary.

"It should just be the first two verses, with a little more instrumental music, and the chorus again — and it would be a great song," he says, adding that he's not above revising a flawed song after the fact: "I go back and fix anything I can find that needs fixing."

Clark says he doesn't write as much as he used to, but he remains no less committed to the craft.

"I know it's still there to be done," he says. "I haven't written my last song, for sure. Nor my best one."