Accessibility links
'Love's Labours,' Tuned Up And Playing In The Park For the first time since the Tony Award-winning adaptation of Two Gentlemen of Verona in 1972, New York's Public Theater is presenting a brand-new musical as part of the Shakespeare in the Park series. The team behind the hit Bloody Bloody Andrew Jackson have adapted Love's Labour's Lost. 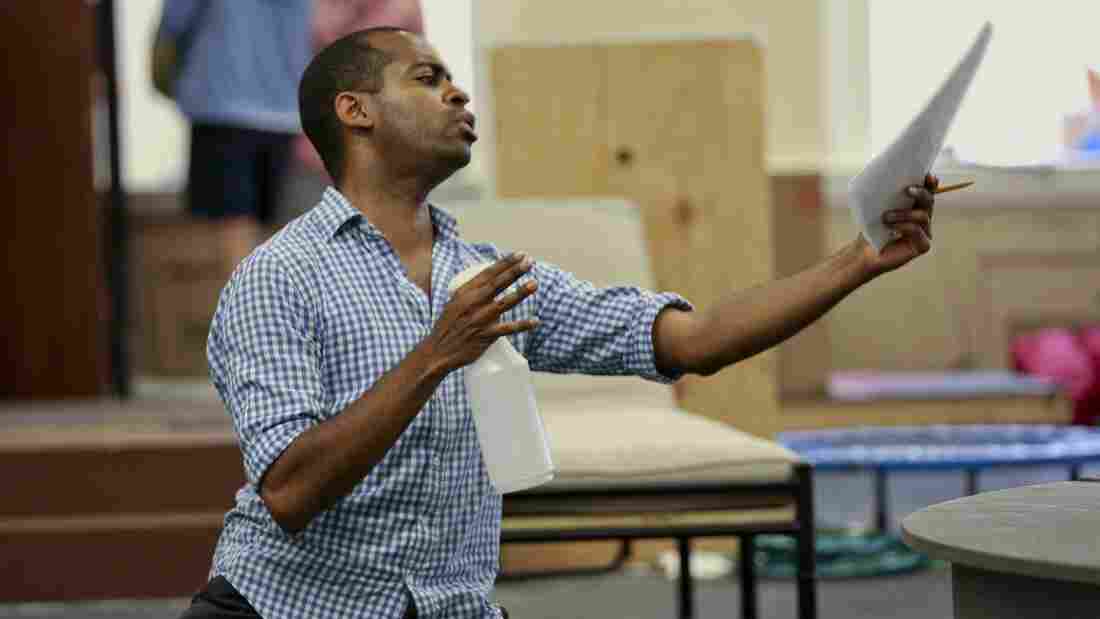 Daniel Breaker, a Juilliard-trained actor who's earned praise for roles as varied as Donkey in Shrek the Musical and the protagonist Youth in Passing Strange, gets to play a king in a new musical adaptation of Shakespeare's Love's Labour's Lost. Tammy Shell/The Public Theater hide caption

A few years ago, after songwriter Michael Friedman and writer-director Alex Timbers had finished working on their cheeky historical musical Bloody Bloody Andrew Jackson, they decided to look for a new project to work on. Friedman says they wanted the next show to have a completely different feel.

"So we started looking at Shakespeare," Friedman says. "And then, I think, we came to sort of, 'How amazing would it be to work on a romantic comedy?' "

The play the two eventually chose to adapt was Love's Labour's Lost, one of Shakespeare's less frequently performed comedies, but one that Friedman discovered was full of "ridiculous funny things."

"And then, once in a while, I think ... some extremely heartfelt and really moving moments, which is what drew us to the play — the balance of the hilarity and then the heart."

The setup for the plot is pretty straightforward.

"I play the King of Navarre," says actor Daniel Breaker, a classically trained performer who's played everything from Shakespeare's Puck to Shrek's Donkey.

"He and his buddies have decided to, essentially, swear off sex, drugs and rock 'n' roll — they've been doing it for some time, and now it's time to stop this for three years," he says. "The bummer is that four really gorgeous girls come into town, right after we decide that."

In Shakespeare, the "boys and girls" are members of the aristocracy. The musical, which uses a great deal of Shakespearean verse in both the scenes and the lyrics, is set at a contemporary college reunion, says Timbers, who adapted the play.

"It's a play about class, in a way," the writer says. "And when we were thinking about what is a prince and a princess today, in American terms that might be, you know, the kids that go to Brown University, right? And so in some ways it made a lot of sense for us, where to set this and what this is. And then, simultaneously, where is your bar wench, and things like that? And that's the girl that works at the one bar in a college town, you know?"

Friedman says when he began working with Timbers on their town-and-gown adaptation — which runs as part of Shakespeare in the Park through Aug. 18 — he found the original text was filled with song cues.

"Even more than most Shakespeare plays, people constantly are like, 'I must write a poem to my love!' You know? So there's so many times when people are sort of, are standing and delivering in a very musical theater way.

Timbers says that there was another reason he and Friedman were drawn to this particular play.

"Love's Labour's Lost has a great trick at the end, where in the last 10 minutes, it suddenly becomes a Chekhov play and becomes incredibly sad," he says. "It doesn't have the danger of a lot of romantic comedies of being perceived just as fluff. It's about growing up, it's about engaging with the world. And these are all life experiences that everyone in the audience will have had.

Oskar Eustis, artistic director of the Public Theater, which produces the free summer Shakespeare program at the Delacorte Theatre in Central Park, is both excited and a bit jittery about tonight's performance.

"We are premiering a major new American musical," he says — and it's in the huge Delacorte, too. And no audience has ever seen it. That's pretty risky for a theater company.

"We didn't do workshops of this, we didn't do out-of-town tryouts, we just said, 'Let's go and put it in the Delacorte.' And that spirit of risk-taking is, I hope, the spirit of the show."