Accessibility links
What's Swimming In The River? Just Look For DNA Biologists have discovered they can track hard-to-see species in streams, ponds and even the ocean by sampling the water for DNA. Scientists say the technique is an important conservation tool: So far, it's been used to track declining giant salamanders and even locate a rare whale. 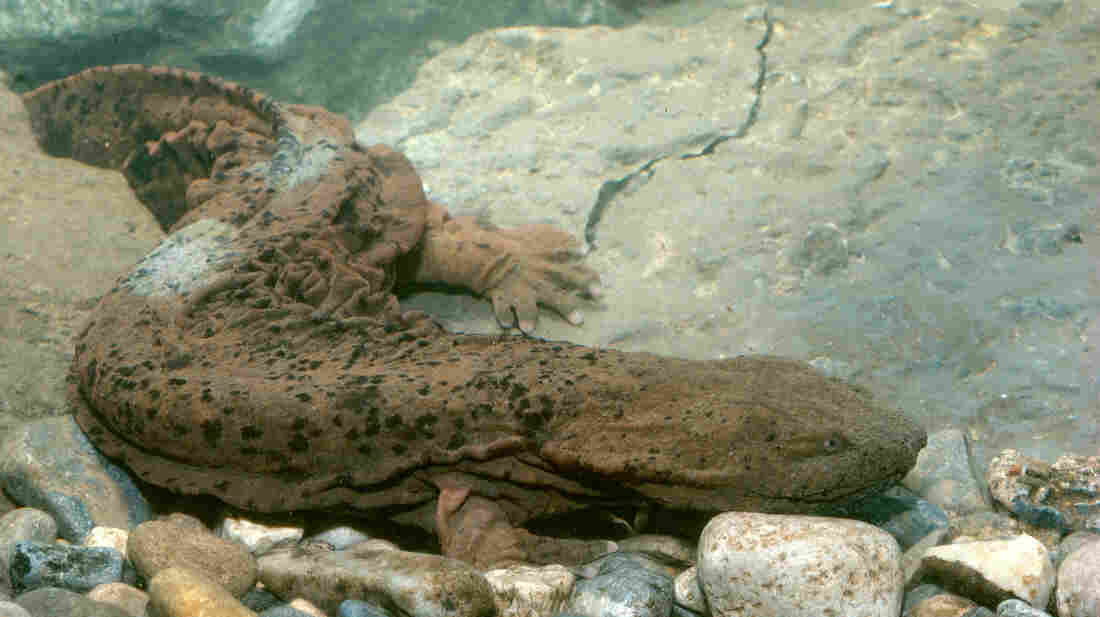 Biologists normally look for the hellbender slamander, which is known by the nickname "snot otter," under rocks in streams. But now there's a gentler way: They can take water samples and look for traces of the animals' DNA. Robert J. Erwin/Science Source hide caption 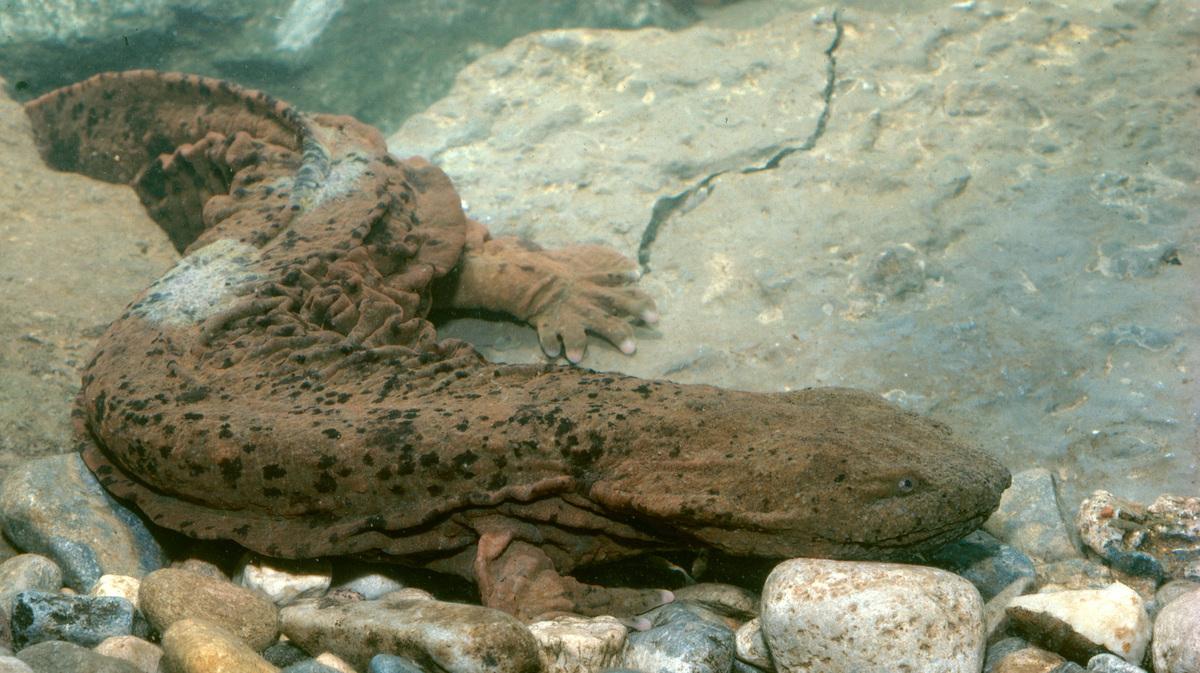 Biologists normally look for the hellbender slamander, which is known by the nickname "snot otter," under rocks in streams. But now there's a gentler way: They can take water samples and look for traces of the animals' DNA.

If you want to protect rare species, first you have to find them. In the past few years, biologists have developed a powerful new tool to do that. They've discovered that they can often find traces of animal DNA in streams, ponds — even oceans.

The idea took root just five years ago, when biologists in France found they could detect invasive American bullfrogs simply by sampling pond water and looking for an exact genetic match to the frogs' DNA.

Now, all sorts of biologists are eagerly putting this test to use. The technology has been a hot topic at the Society for Conservation Biology's global meeting in Baltimore this week.

Conservation scientist Stephen Spear, for example, has been sampling water to study one of the oddest creatures in American streams: the hellbender salamander.

"It's a really neat critter. It's actually the largest salamander in North America," he says. It can grow up to 2 feet long and live for more than 30 years.

"But a lot of people who live where it is — which is mostly in the Appalachian region from New York to Georgia — don't know about it because it's totally aquatic in rivers and streams," Spear says. "It spends time under large rocks."

Biologists usually look for the hellbender (nicknamed the "snot otter") by prying up enormous stream boulders and snorkeling under them. Spear, who works for a nonprofit amphibian group called The Orianne Society, has found a gentler way: He's been taking water samples from the streams where he's looking for these salamanders.

"We can actually extract the DNA from this water sample and be able to tell that it's hellbender DNA. And we know that a hellbender is there without ever having to lift a rock, or maybe even see one," he says.

And it turns out that when hellbenders are breeding, they shed a lot more DNA into the water. "So we might be able to tell where they're successfully breeding," Spear says, "which would be huge for understanding where the healthy populations are and also where we need to put our conservation efforts."

Hellbenders are apparently in decline — and may end up protected by the Endangered Species Act at some point — so it's important for biologists to know where they are and where they're breeding.

Spear's report at the Society for Conservation Biology meeting was just one of more than a dozen looking at DNA in the environment.

Philip Francis Thomsen from the University of Copenhagen says he has successfully used it to study fish in the ocean.

He sampled water near Elsinore, the setting for Hamlet. He found DNA from 15 fish species, including one big surprise: the sardine, which usually inhabits much warmer waters to the south.

"This sardine has never been sighted in the area, and it's a very rare species in Denmark," Thomsen says.

Fisheries biologists think the sardine may be moving north as a consequence of climate change, so sampling DNA in the environment may help them track changes like this.

In fact, Thomsen says it should be possible to look for DNA from hundreds of species simultaneously. If he could do that, he can monitor the diversity of life on a biological hot spot — like a coral reef — simply by taking water samples.

Thomsen even had a bit of success tracking the endangered harbor porpoise by sampling ocean water off the coast of Denmark. And at one point, he detected the DNA of a related species, the long-finned pilot whale.

"That is a species that's very rarely sighted in Danish waters. And funnily enough, when I checked up on this afterwards ... there have been two sightings in Denmark that same year," Thomsen says.

In other settings, DNA sampling is being used to monitor the Great Lakes for signs of the dreaded Asian carp, which is threatening to invade. It's being explored as a way to look for signs of land-dwelling animals that visit watering holes. Yes, drool contains DNA.

Ultimately, biologists would like to be able to use these tests to estimate the size of animal populations — but that, so far, is just a dream.

And Thomsen notes that finding animals though their DNA doesn't by itself help vulnerable species.

"We still need to convince managers and authorities and governments to do the proper actions," he says.