Accessibility links
Movie Review - 'The Act of Killing' - In Indonesia, A Genocide Restaged For The Camera NPR's Bob Mondello reviews a documentary that raised hackles and inspired hosannahs when it played at the Telluride Film Festival. The Act of Killing includes images of an Indonesian genocide — re-enacted by the perpetrators — that add up to a singularly arresting act of cinema. (Recommended) 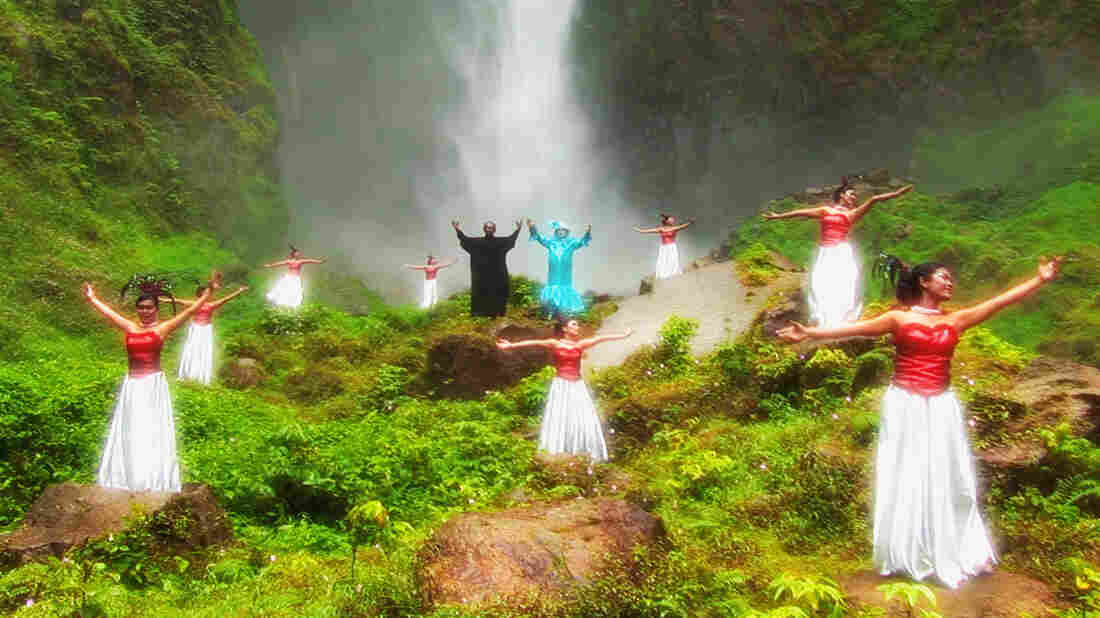 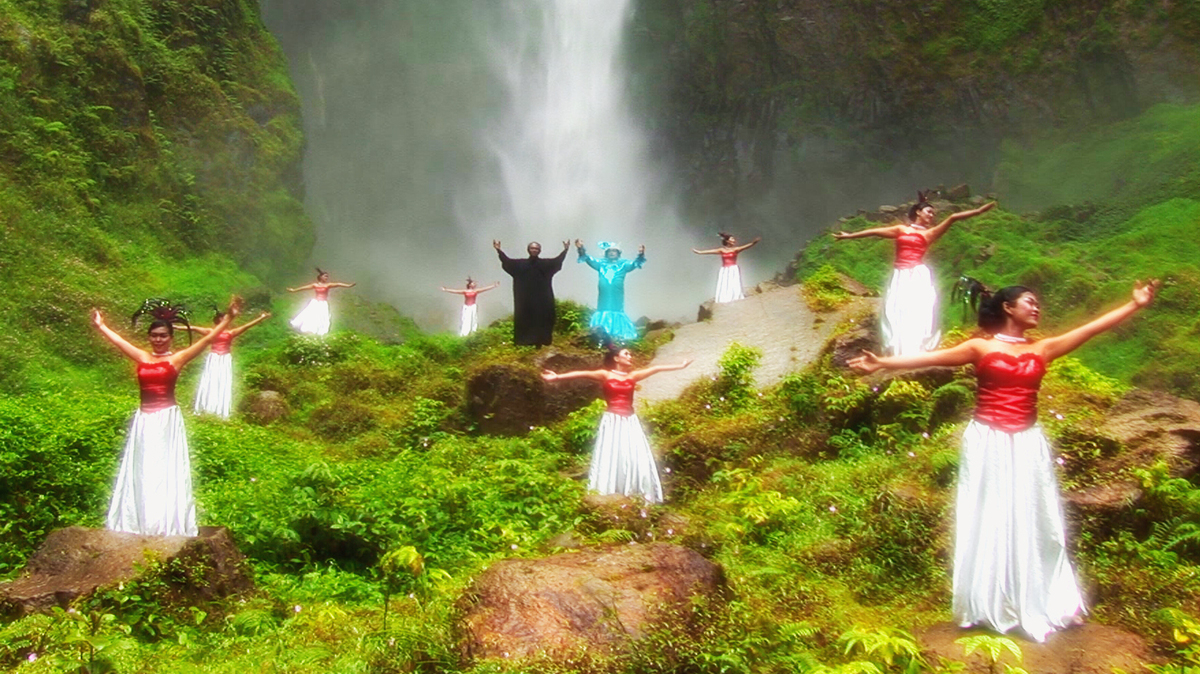 The opening of The Act of Killing, which seems like something out of a Bollywood musical, has a happy energy about it. But as we'll learn, the two men in the center led death squads in the 1960s, when an estimated 1.2 million Indonesians were killed. In Joshua Oppenheimer's astonishing documentary, they obligingly re-enact their crimes.

The Act of Killing

"Genocide in Indonesia." Those words probably don't make you want to rush out to see a new movie.

From 'The Act of Killing' - 'If This Film Is A Success'

'If This Film Is A Success'

But what if we add these: Genocide in Indonesia, with gangsters, cowboys, dancing girls, men in drag and splashy musical numbers. They're all part of the year's strangest documentary, The Act of Killing.

The opening looks like something from a demented Bollywood musical. Costumed girls come dancing out of the mouth of a giant fish, frolicking under a waterfall as a director barks at them to look happy, happier. Standing with them, also getting soaked, are two men, one slender and dressed as a priest, the other fat, in a turquoise satin gown.

These two are notorious Indonesian death-squad leaders — men who slaughtered countless civilians they accused of being communists after a military takeover in 1965. And they are not shy in talking about what they've done.

But the filmmakers didn't want a talking-heads documentary, so they offered them a different option: re-enact their stories in whatever cinematic style they like. They like mob movies, and musicals. And this bizarre scene is part of one such re-enactment.

The slender man in black is executioner Anwar Congo. The heavyset man gowned in turquoise is paramilitary leader Herman Koto, who is not only enthusiastic about dressing like Carmen Miranda, but also eager to recruit extras for the film's retellings of horrifying events. He holds auditions in the street, urging people too young to have been alive during the actual atrocities to scream as if their families are being killed.

A crowd has gathered and applauds.

Filmmaker Joshua Oppenheimer is obviously treading on dicey moral ground here, empowering killers to tell their story when they've never been called to account for the barbarism that brought them to power. By some estimates, more than 1.2 million civilians were slaughtered in these Indonesian upheavals, which makes it somewhat unnerving when these men say that films inspired them in their sadism. They picked up strangulation techniques, for instance, from gangster flicks. 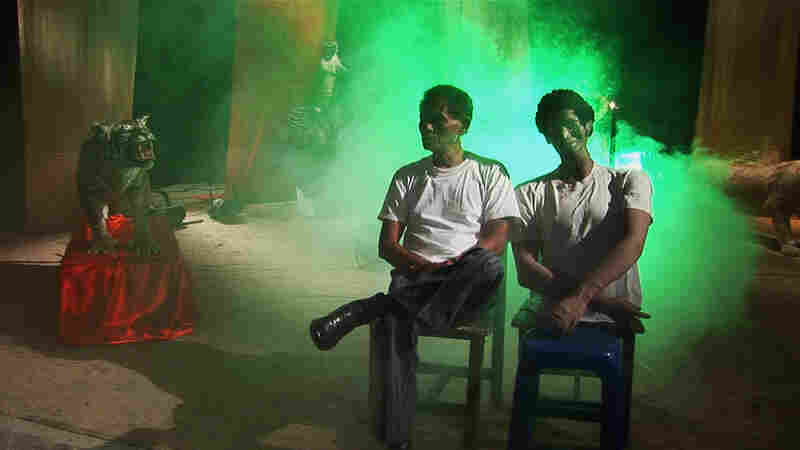 Executioner Anwar Congo (left, with a prop dummy) appears in the film — sometimes as a victim of atrocities he participated in or oversaw. Drafthouse hide caption 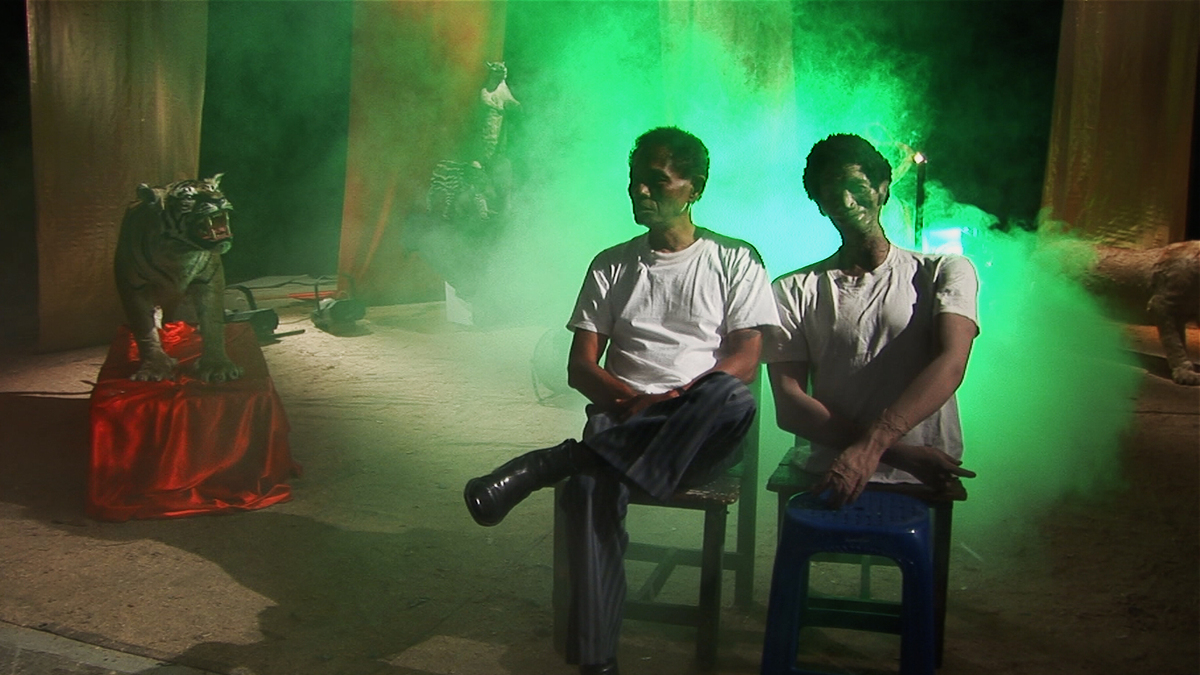 Executioner Anwar Congo (left, with a prop dummy) appears in the film — sometimes as a victim of atrocities he participated in or oversaw.

Congo, playing a victim at one point, has just such a technique used on him, to his quite evident distress. But in public he shows no doubts, even appearing on TV, where a telegenic interviewer congratulates him for having found an efficient, humane way of killing communists.

Back in the TV control room, a producer wonders how these guys can sleep. As will you once they've restaged their killings for Oppenheimer's cameras, sometimes in stylized ways, other times with a realism so wrenching the extras are left almost catatonic in a scene's wake.

Play-acting with murderers. Not sure I'd want that on my resume — and with easily two-thirds of the performers and technicians listed in the end credits as "anonymous," it's clear many of the crew found the idea disquieting, too.

But there's a reason that two great documentary filmmakers — Werner Herzog and Errol Morris — signed on to produce The Act of Killing. It's a virtually unprecedented social document. Time after time, Oppenheimer highlights jaw-dropping disconnects — killers proud of the fact that they simply made up the charges for which they executed people; thugs comforting children who've been told to cry for a scene, but then can't stop; a strangulation scene interrupted by the call to evening prayers; gangsters laughing about the 14-year-olds they raped.

But the disconnects aren't the whole film. For in having these monsters re-create their atrocities for the camera, a space has been opened ... for feeling.

And the filmmakers show you what may be the first consequence of opening that space, as one man is hit, almost physically, by the reality of what he has done, and then walks out of the scene without a word. The Act of Killing, which may leave you speechless too, is one of the most arresting acts of cinema around. (Recommended)