Accessibility links
Preserving Balanchine's Ballet Legacy, 30 Years Later Legendary choreographer George Balanchine's work came to define ballet for much of the 20th century. He died in 1983, but his work survived thanks to his disciples who have taken his dances to ballet companies around the world. 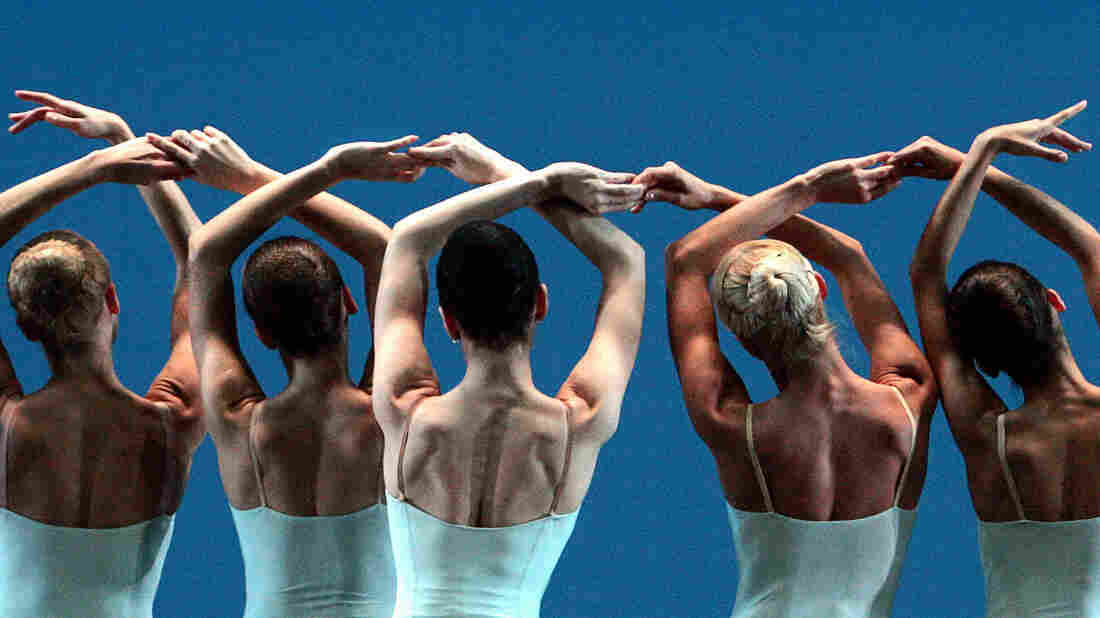 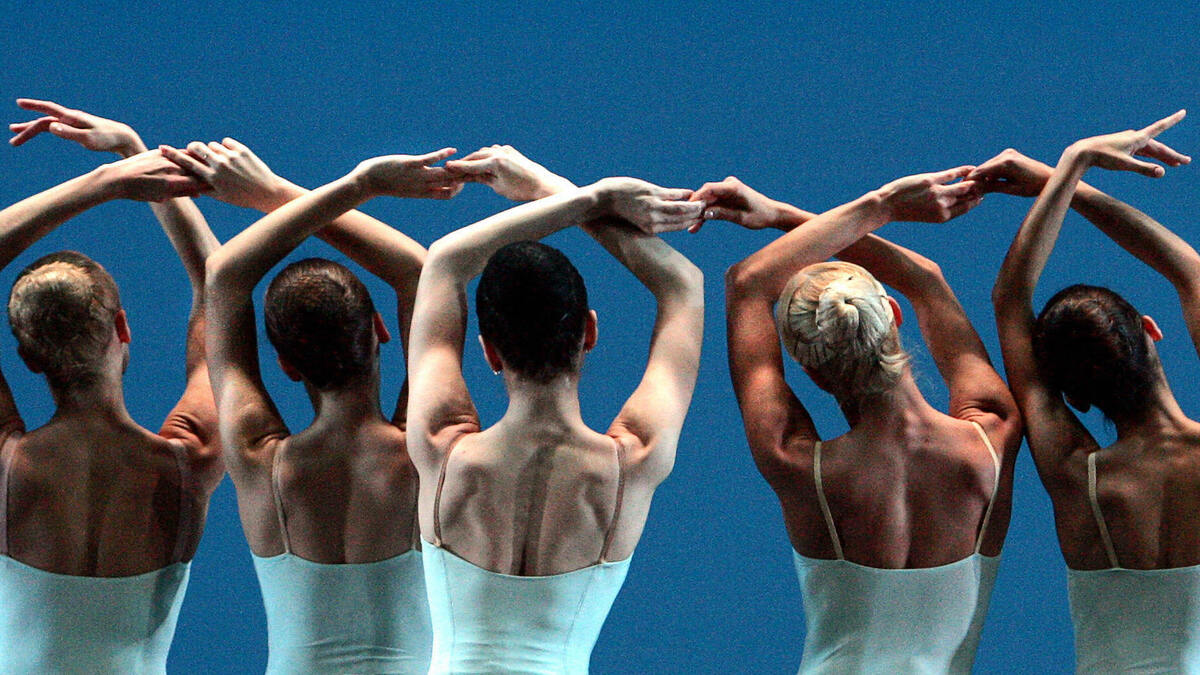 Dancers perform George Balanchine's Serenade in a 2007 production staged by Francia Russell and Suzanne Schorer at the Bolshoi Theatre in Moscow.

Francia Russell hasn't performed in 50 years, but she says as soon as she hears the music for George Balanchine's Concerto Barocco, her body starts to move: "I could do it in my sleep, you know, get up and sleepwalk and do it." 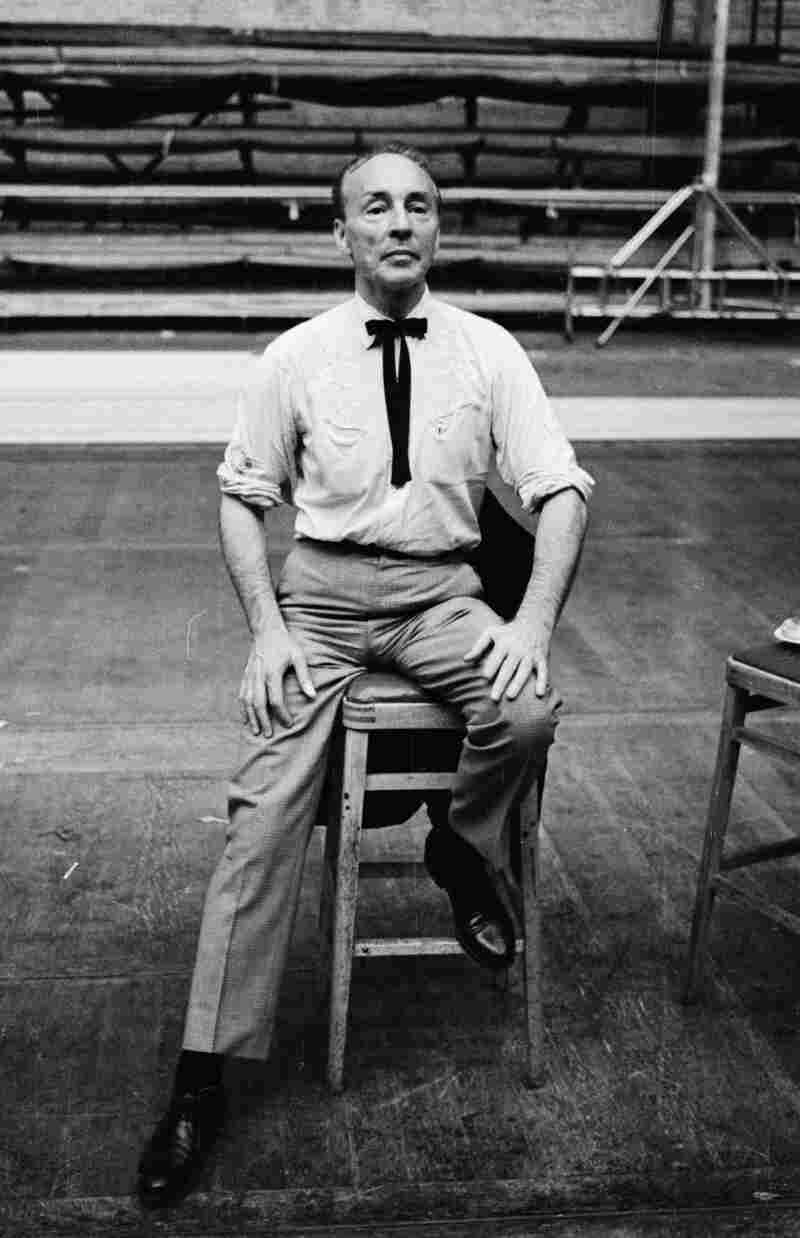 George Balanchine, shown here in 1965, was born in St. Petersburg, Russia, but moved to New York when he was 29. Rowntree/Getty Images hide caption 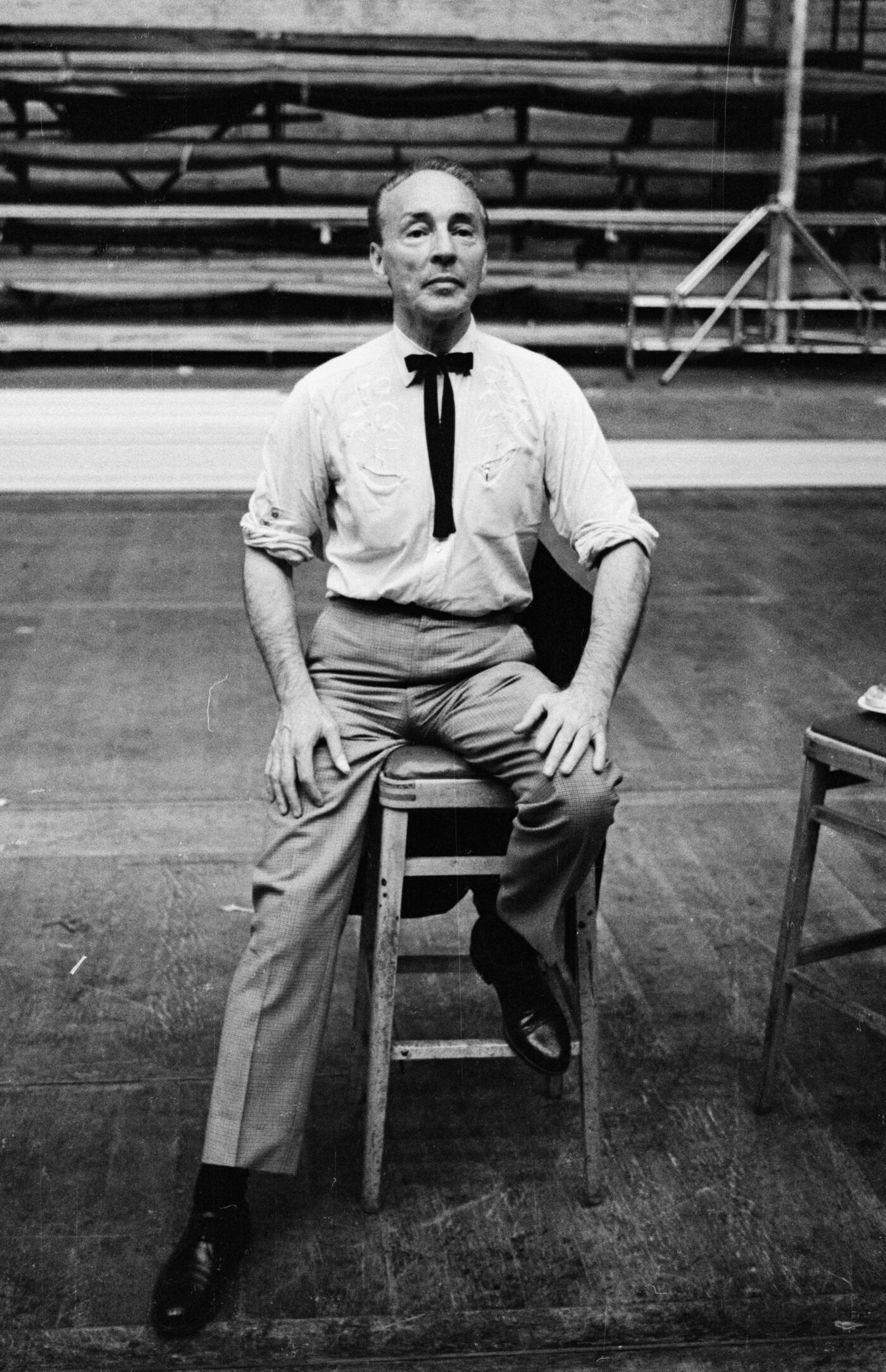 George Balanchine, shown here in 1965, was born in St. Petersburg, Russia, but moved to New York when he was 29.

Balanchine's work as a choreographer for the New York City Ballet came to define ballet for much of the 20th century. He died 30 years ago, but in Russell — and in dance companies around the world — his work lives on.

Russell joined Balanchine's company in 1956. She picked up steps quickly, so Balanchine sometimes used her when he was making new dances. "Those dancers who worked with him a lot understood very quickly what he wanted. It wasn't just a physical thing in the studio," she says. "Our minds were working all the time. They had to be."

She says Balanchine loved smart dancers. "He also loved some beautiful girls that were dumber than posts," she says, laughing. "But for a guinea pig to choreograph on, he really liked intelligence."

Balanchine used Russell to create Agon, one of his most significant and long-lived ballets.

Russell left New York City Ballet in 1962; she felt she didn't have what it took to be a great ballerina. Two years later, Balanchine called her back and offered her the job of assistant ballet mistress.

Balanchine wanted Russell to perform, but instead Russell focused on learning every one of his ballets so she could help teach them to company members. This was in the days before videotape, so Russell documented every dance by hand in a spiral-bound notebook. "Some ballets, I had to go around and pester dancers," she remembers. "They would see me coming and run because I was always asking questions — 'Show me what you did right here!' "

One of those notebooks contains Russell's Concerto Barocco notes, made from memory 50 years ago. On one page, she drew little stick figures showing how the dancers are positioned onstage throughout the performance; on the page facing it, she recorded every step of the ballet. 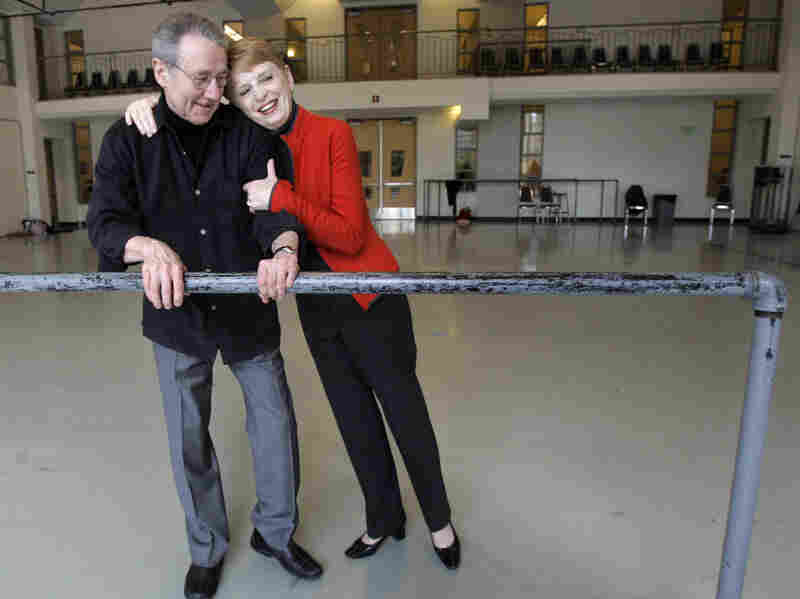 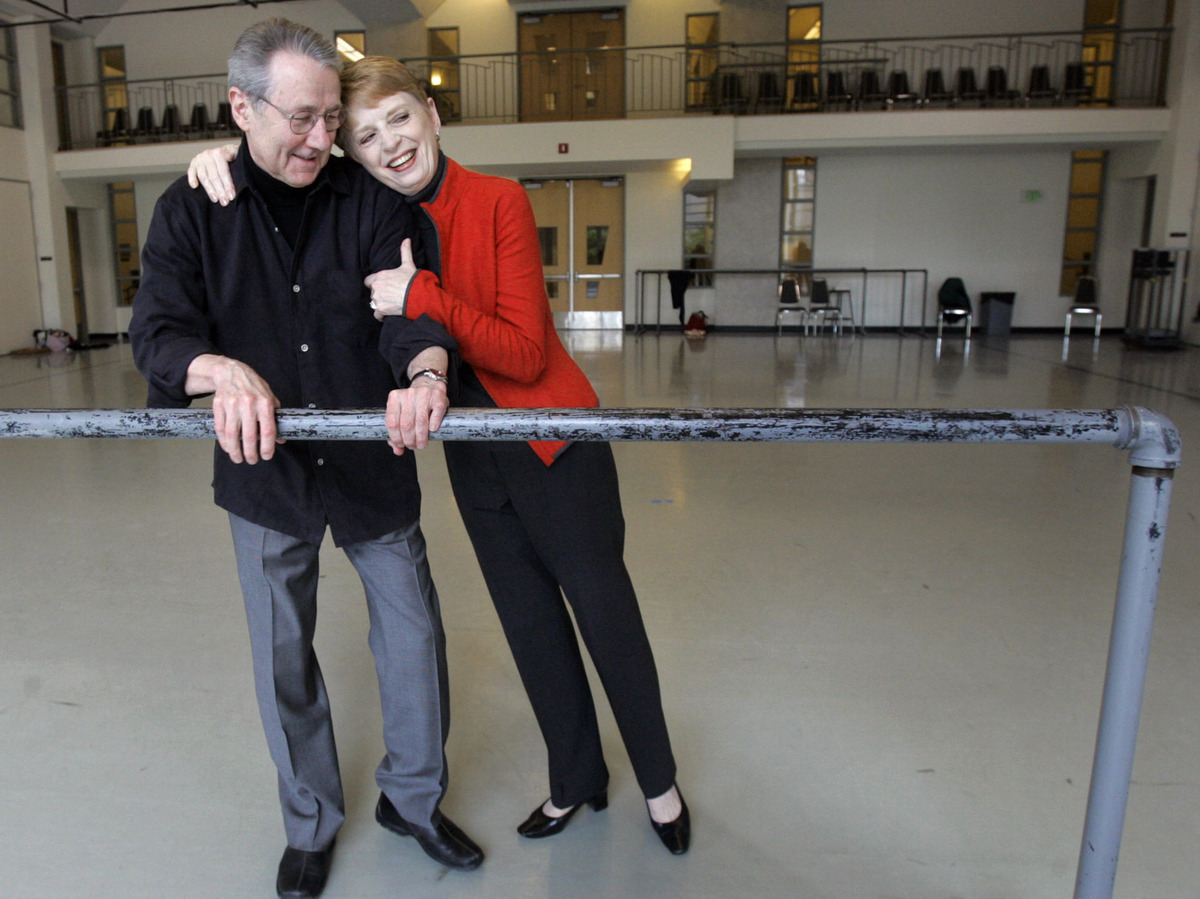 Francia Russell and her husband, Kent Stowell, stepped down as co-artistic directors of Pacific Northwest Ballet in 2005.

She brought the notebooks with her to Seattle in 1977, when Russell and her husband, Kent Stowell, took over artistic leadership of Pacific Northwest Ballet. And she still prefers those paper notes to videotapes.

"So many people look at the video, and the dancers are quick, and they're smart, and they learn it from the video," Russell says. "But I think the process of transmitting what the choreographer wanted is so important. And in ballet it's so personal ... that to lose that and just rely on videotape — it doesn't seem real to me. You know, for instance, those of us who actually worked with Balanchine — to learn from a videotape is not the same as learning from us who were in the studio with him."

Russell has worked hard to pass Balanchine's dances on to a younger generation, but she's not sure the choreographer would approve of everything she's done. "Although he said, 'Go do your own thing, dear,' you know, he really wanted to put his stamp on it," she says.

She hopes that stamp is still obvious 30 years after Balanchine's death.

On a gray afternoon at the Pacific Northwest Ballet studios, eight young women in sweaty leotards watch intently as Russell demonstrates how they should extend their arms.

Soloist Lindsi Dec says she's learned many Balanchine roles from Russell. "She has an incredible passion and love for all of those ballets. There's something in every single one of them that is special to her. Because of that, it translates to us," Dec says. "And so then we want to have that passion, and we want to do it as best as we can — do it justice."

In 1989, Russell went to St. Petersburg — then Leningrad — in Russia to reintroduce Kirov Ballet dancers to Balanchine's work. As soon as she got there, she realized they knew nothing about their countryman: "And I said, 'OK, for this rehearsal, we're going to sit and talk.' And I told them everything I could about Balanchine; about his life, and what he'd accomplished, and what he wanted from his ballets. They didn't know, and it made a complete difference."

A New Group Of Teachers

Now Russia's major ballet companies regularly perform Balanchine's work, as do most ballet troupes. But they're starting to learn it from a new group of teachers, as fewer dancers who worked directly with Balanchine are available to stage his pieces.

At some point, Russell will also stop staging Balanchine's work, and it's not clear who will replace her. The George Balanchine Trust controls the rights to his dances, but it has no formal program to train people to stage them; it has relied on Russell's generation to do that work.

"You have a generation that's starting to stage Balanchine that never saw him, never met him," says Peter Boal, a former New York City Ballet principal who studied at the School of American Ballet.

"I really trained to be a classical ballet dancer to work with him. He founded a special class my last two years in the school. He came to it five times a year to watch it; he gave us corrections. I just wanted to dance for Balanchine. That was what I wanted to do."

George Balanchine died on April 30, 1983, the same day Boal joined New York City Ballet as a member of the corps de ballet. He went on to perform more than 60 Balanchine works there before taking over the reins from Francia Russell and her husband at Pacific Northwest Ballet.

Although Boal didn't work with Russell during her tenure in New York, he learned from dancers like her; and he promises to carry on that tradition as a tribute to Balanchine.

"He said, 'My ballets are like butterflies — beautiful today, and one day they'll be gone,' " Boal says. "But I hope he's wrong. Not on my watch."