Accessibility links
Pie-Deprived New Orleans Roots For Bakery, A Year After Fire Eating a Hubig's fried fruit pie has been a ritual for decades for the local food-obsessed in New Orleans. But a year ago, a fire destroyed the baking facility and much of its custom machinery from the 1920s. Rebuilding is a long and expensive road, but fans are eagerly awaiting the bakery's comeback. 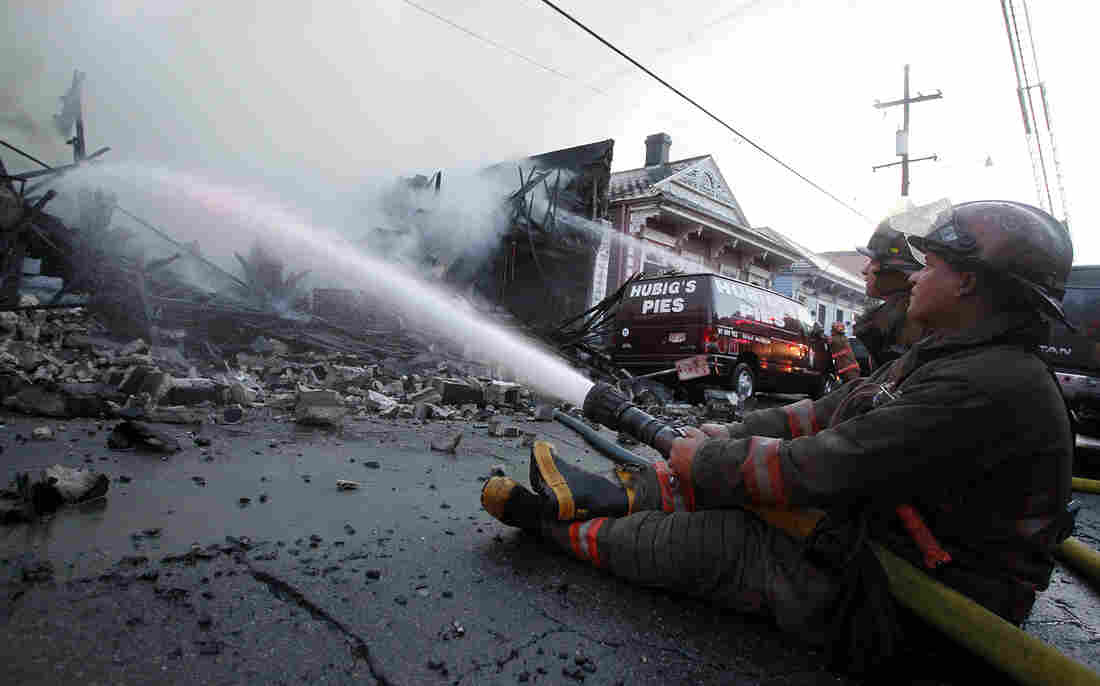 Almost any kind of comeback gets New Orleans excited, since the city lost so much in the flood after Hurricane Katrina. That goes especially for food.

One year ago Saturday, New Orleans lost a beloved brand when Hubig's pie bakery burned to the ground. The hand-held, fruit-filled crescents, fried golden-brown, had been delivered fresh to more than 1,000 local stores each morning.

Pie fans have come out in droves to support the company. But it takes more than T-shirts and fond memories to restart a business from scratch. 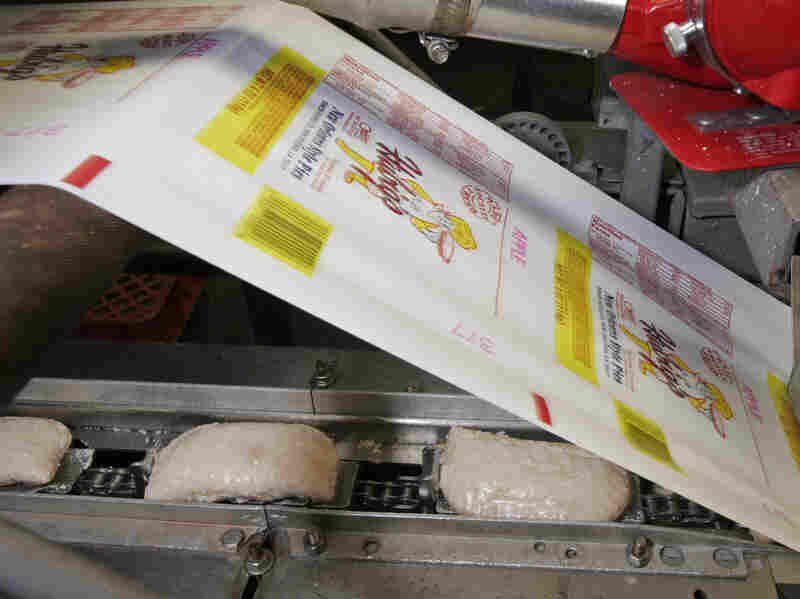 This 2007 picture taken before the fire that destroyed Hubig's Pies shows fresh glazed fruit-filled pies being wrapped for delivery at the bakery in New Orleans. Alex Brandon/AP hide caption 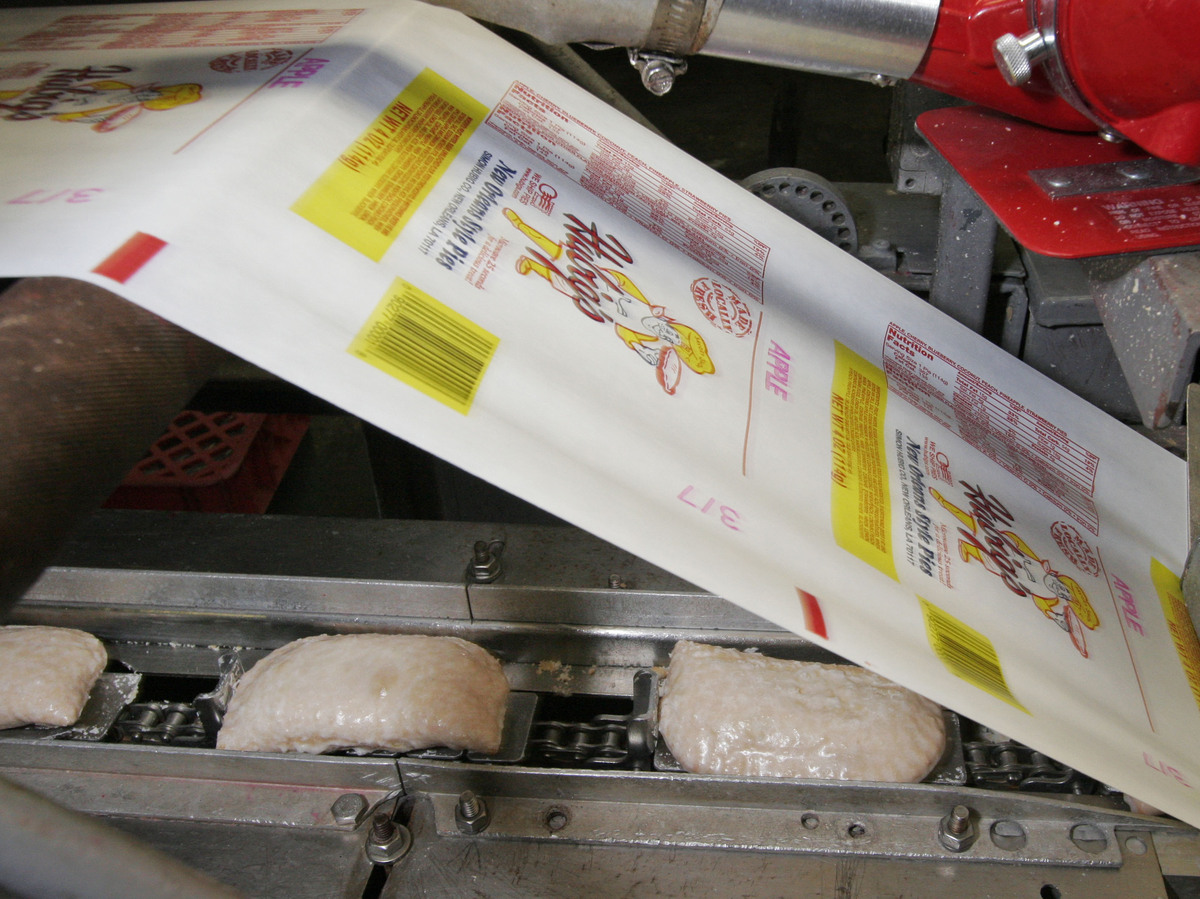 This 2007 picture taken before the fire that destroyed Hubig's Pies shows fresh glazed fruit-filled pies being wrapped for delivery at the bakery in New Orleans.

"Some trucks were actually on the road delivering to convenience stores and grocery stores," says Drew Ramsey, the third generation of his family to run Hubig's Pies. "They did not make the whole route. People stopped 'em, and they never even made it in the front door. They were out of pies by the time the sun came up."

Even a year later, the rumor mill churns on Twitter: Who has the last stockpiled Hubig's pie? Today, fans still mourn their favorite flavor. Dale Stainbrook and Ann Martin ate a Hubig's almost every morning with coffee. Stainbrook's favorite flavor was cherry. He jokes that he's lost weight and sleep since the fire.

It's been like a yearlong jazz funeral to cope with pie withdrawal, complete with musical tributes. Dave Jordan wrote a tune mourning the loss for his album, Bring Back Red Raspberry (named for his favorite flavor). Even the New Orleans City Council roots for pies. A meeting on permits for the new Hubig's factory prompted calls for two lemon pies and one coconut before taking a vote.

"That's all we have left, you know, the little fat man holding the pie," Ramsey says.

Trinket sales make up a fraction of lost pie revenue. But community image is key to the comeback, says geographer Richard Campanella, who's written multiple books about New Orleans.

"Hubig's is one of those things that had not yet been co-opted by the tourism industry like beignets have," he says. "And it had that deep-rooted localism that endeared it."

Even Hubig's factory was endearing. On a block of carefully restored pink and green Creole cottages, it was the lone industrial holdout. "You know, it produced something. It kept the neighborhood real," says Campanella, a professor at the Tulane School of Architecture. 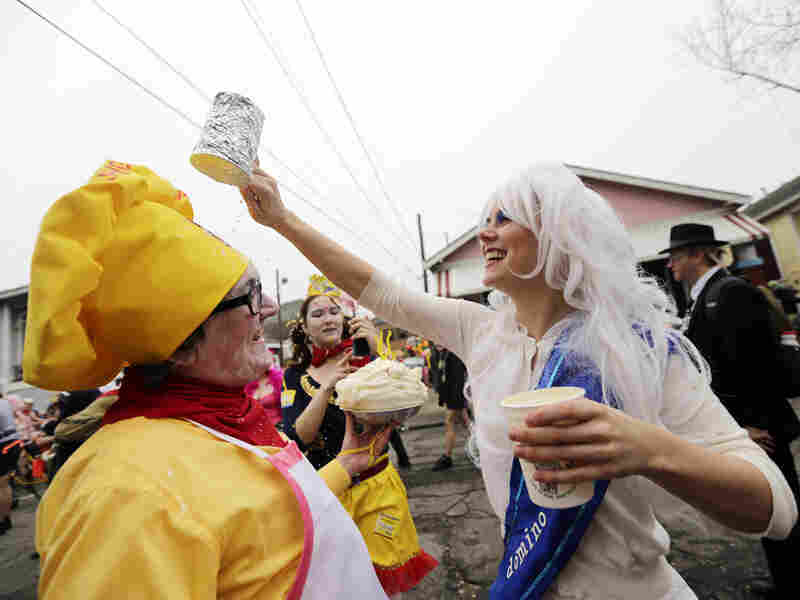 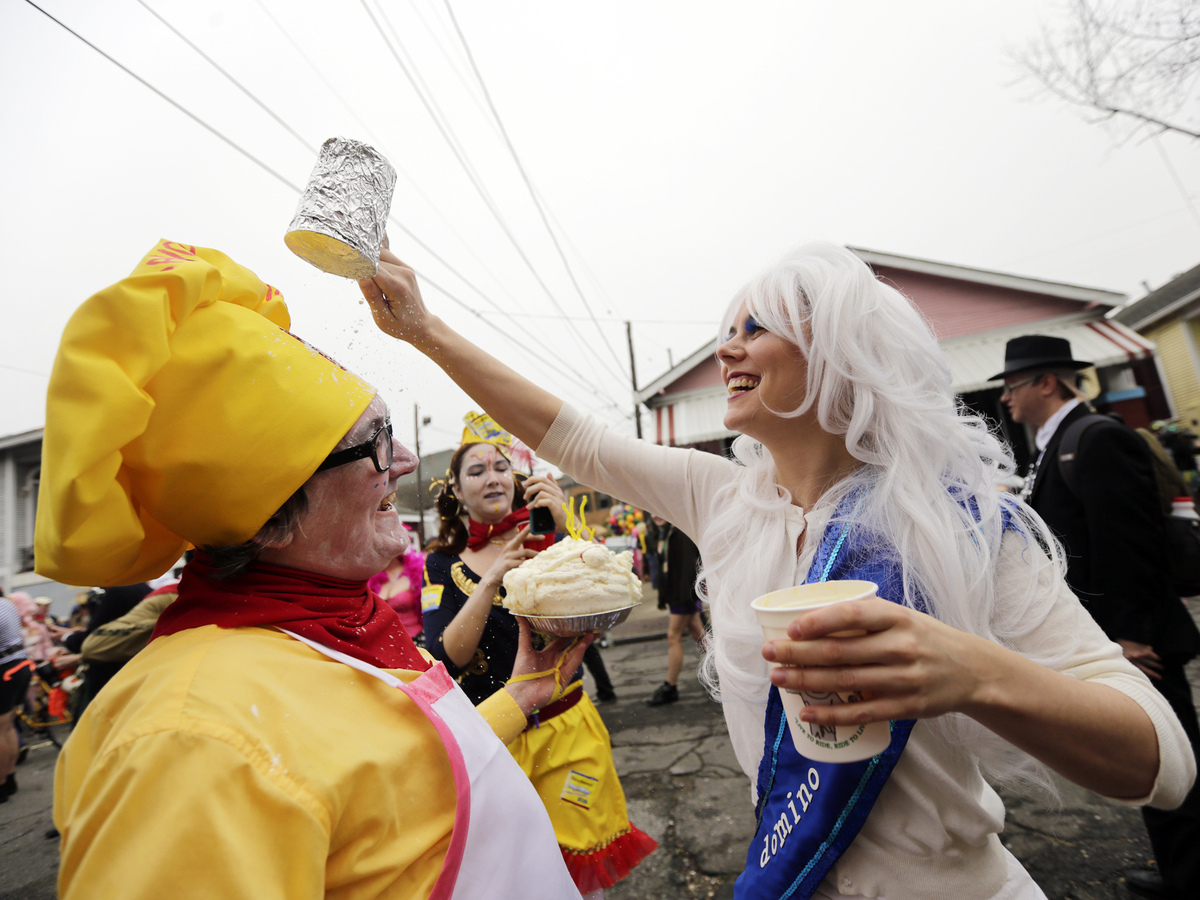 Jill Pasquarella (right) pours powdered sugar on Brandon Connelly, who dressed as a baker from Hubig's Pies, during Mardi Gras in New Orleans in February.

Authenticity gets expensive. The historic neighborhood means a long list of regulations. And 1920s factory gear is hard to replicate. Owner Ramsey has custom machinists and a metallurgist crafting a special wheel to cut the pie dough. How will he know the new product stacks up?

To get that first pie off the line — hopefully next year — Hubig's will have to do something it's never done: take on debt. Probably more than $1 million of it. But fans like Stainbrook and Martin pledge they'll buy plenty of pies. Stainbrook says he'll be waiting in line as soon as the doors open.

"We'll be camping out," Martin says.

And in a city as die-hard about local food as New Orleans, Hubig's Pies might just be able to take those testimonials to the bank.