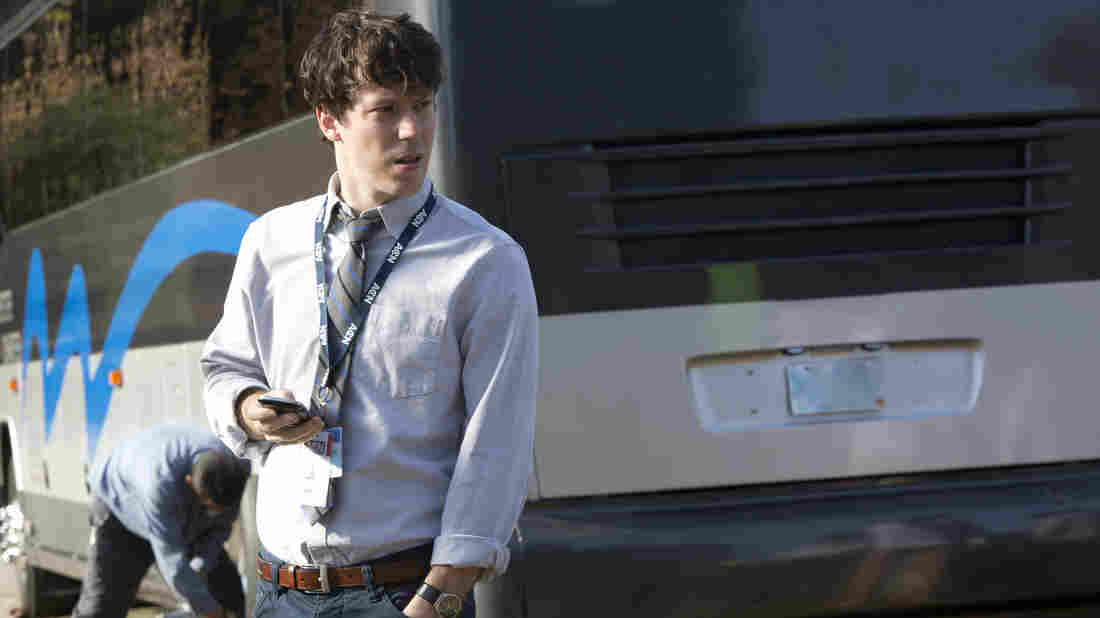 In HBO's The Newsroom, John Gallagher Jr. plays Jim Harper, the senior producer of the nightly cable news program anchored by Will McAvoy (Jeff Daniels). The show's second season, which began in July, takes place in 2012 during the presidential primaries. Ever since the start of the series, Gallagher's character has been in a will-they-or-won't-they relationship with one of the young producers of the news show. Right now, it's looking to him like they won't, and in an attempt to get away from the woman who's broken his heart, he's decided to go on the campaign trail and report from the Mitt Romney bus. But he soon discovers there's nothing to report, just repetitive stump speeches and daily spin delivered by Romney campaign aides on the bus. In a recent episode, Jim tried to get some real answers out of the aides, and ended up getting thrown off the bus.

In addition to acting, Gallagher can sing and dance. He won a Tony in 2007 for his performance in the Broadway musical Spring Awakening. (Lea Michele, who went on to star in Glee, was also part of that cast.) Gallagher also played Johnny, aka "Jesus of Suburbia," in the Green Day musical American Idiot as part of that show's original Broadway cast.

He joins Fresh Air's Terry Gross to discuss how he rehearses for The Newsroom, his appearance on the fourth season of The West Wing and the challenges of translating a Green Day album into a Broadway musical.

"It's hard because usually most of the rehearsal happens when I'm alone at home in my apartment. I'll work on the scenes; I'll walk around; I'll try to say them out loud. Sometimes I'll record myself saying all of the lines, even the characters that aren't mine, and I'll listen to that while I'm doing dishes or cooking dinner, doing something else just so that I'm trying to get it in my head in a way that doesn't feel like work. I've always been able to listen to a song ... once or twice and know all of the lyrics, and so I find sometimes getting audible cues in my head will help me learn it in a way that, I'll go to rehearse it again and all of the sudden it will be in there. It will start being a little more effortless.

"Because the truth is we don't have a lot of time to rehearse with each other. ... Shooting a TV series, you might have a long day of doing ... [a] scene ... which is kind of lengthy and verbose alone, that, I think, was one of four or five scenes we shot that day. So you have to kind of compartmentalize and learn a lot for one particular day, and you only really get a couple of times to rehearse them with your co-stars. So day one of season one of The Newsroom, one of the things Aaron Sorkin said to us, he said, 'The more rehearsed and prepared you show up in the morning, the happier and more confident you're going to be about your performance.' "

On his technique of recording himself reading all the parts

"It's more like ... a bunch of zombies reading a bunch of Aaron Sorkin dialogue. I try not to put any spin on how I'm going to deliver it. Usually I'll just read it kind of monotone without a lot of inflections or affectations. I'll just try reading it kind of plainly so that all the characters basically have the same kind of tone and voice just so I can get it, just so I can get the words in there."

On his West Wing appearance when he was 18

"Aaron did not remember that I had been on The West Wing. ... When I was about 18 years old, I ... did a small guest spot on an episode of The West Wing in Season 4, and I never met him on set because we shot it on location in Pittsburgh and he was back in L.A. writing the rest of the season. So whenever people needed to get notes from him, everybody would gather around a cellphone and he would give out notes for the scene and whatnot. It wasn't until the end of Season 1 [of The Newsroom], he came on set one day, I heard him come on set and say, 'Where's John Gallagher?' and I thought, 'Oh no, what did I do? I'm going to get fired.' And he came up to me and said, 'I can't believe I'm just now realizing you were our kid, you were our guy — Episode 1, Season 4 of The West Wing!' He was very nice, and he said, 'I'm so sorry I didn't put two and two together. You look a lot different.' And I said, 'I know, I had a very unfortunate haircut at that time.' " 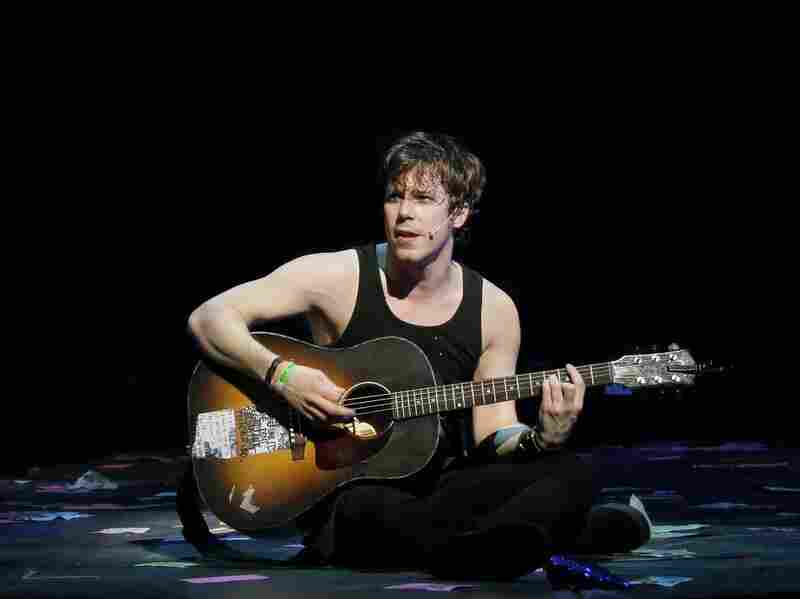 Gallagher says American Idiot was one of the most physically intense shows he has ever done. Paul Kolnik/AP hide caption 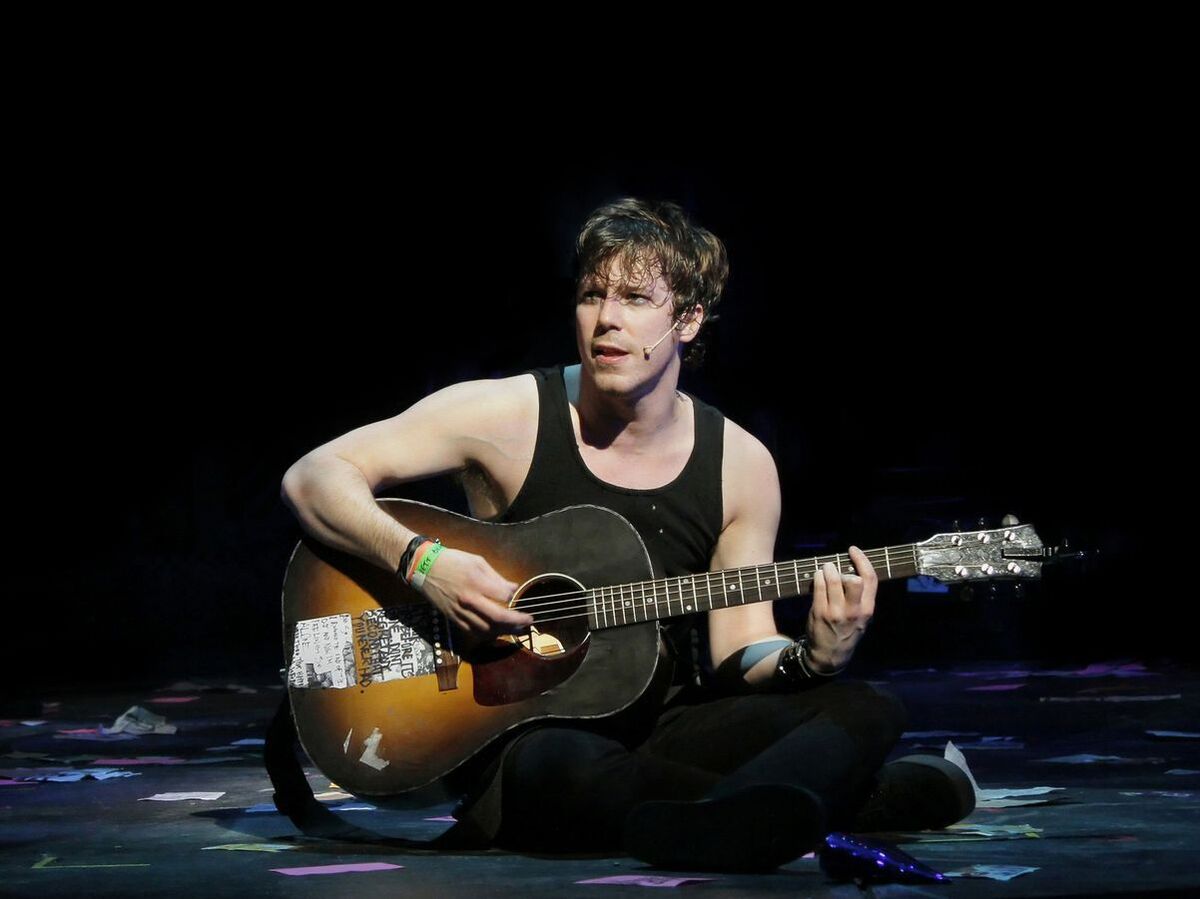 Gallagher says American Idiot was one of the most physically intense shows he has ever done.

On how his American Idiot role came about

"I did a show called Spring Awakening and the director of that was a guy named Michael Mayer, who became a really good friend of mine over the process of working on Spring Awakening for several years. And while we were doing Spring Awakening, Billie Joe Armstrong, the lead singer of Green Day, came to see it. He got invited to come check out the show as kind of a potential 'Hey, would you like to work with us?' because Michael was a big fan of the record American Idiot and he saw that it had potential to become a musical or stage show because it's a concept rock album. And Michael and Billie Joe hit it off and they were going to do a workshop a few months later and they both agreed that I would be a good candidate to play the lead role in that. ... Once we did the first workshop they just kept asking me to come back."

On translating Green Day songs into a Broadway show

"It was kind of a natural fit from the first workshop. There's something so epic about that record and so grandiose and thematic and universal. ... In that sense, it made sense. But one thing that was tough was finding a way to tell the story without having to bring in traditional scenes. We felt that it should move really fast, it should move kind of in a way that a rock concert moves, where sometimes songs will end and the next one will start immediately. ... A lot of the challenge came between how do you tell the story without having that traditional book scene and without having traditional musical theater lyrics. So a lot of it came down to choreography and movement and lighting and projections that we'd put on the back wall and different ways of figuring out how we could convey the story and push the story forward in a nontraditional sense."

Aaron Sorkin: The Writer Behind 'The Newsroom'

Back For More: Sorkin's 'Newsroom' Is A Serious Standout

Sorkin's 'Newsroom' Is No Place For Optimism

On the physical challenge of the show

"American Idiot was the hardest thing I've ever done, I think, as an actor, mostly because of how intense [it was] and what a toll it took on us all physically. We had someone tear his meniscus in his knee, and he was out of the show for over a month. We had someone get kicked in the head by another dancer and it gave him a concussion. People were constantly losing their voices, spraining their ankles. I still have a shoulder that clicks when I do certain movements because I landed ... wrong ... and that affected my sternum and I woke up one morning and I couldn't turn my head. So we all went through it physically doing that show. "

On his pratfall entrance in his first scene on The Newsroom

"That was ... a thing early on, studying physical comedians. I remember in particular there's a pratfall that Bill Murray does in the movie Scrooged that is one of the most amazing fake falls that I'd ever seen. So moments like that, I would start practicing those in my room and seeing how real I could make it look. When I got the script and realized that, 'Oh, my first moment in this pilot is running into the room and completely falling over.' ... But that goes back to ... you'll see elements of screwball comedy peppered into [Aaron Sorkin's] work all the time."