Accessibility links
Statue Brings Friction Over WWII Comfort Women To California A sculpture memorializing the East Asian women forced to provide sex to Japanese soldiers during World War II is causing a stir in Glendale, Calif. An identical statue in Seoul has become a focal point of tension among former "comfort women" and some Japanese who say the women's stories are untrue. 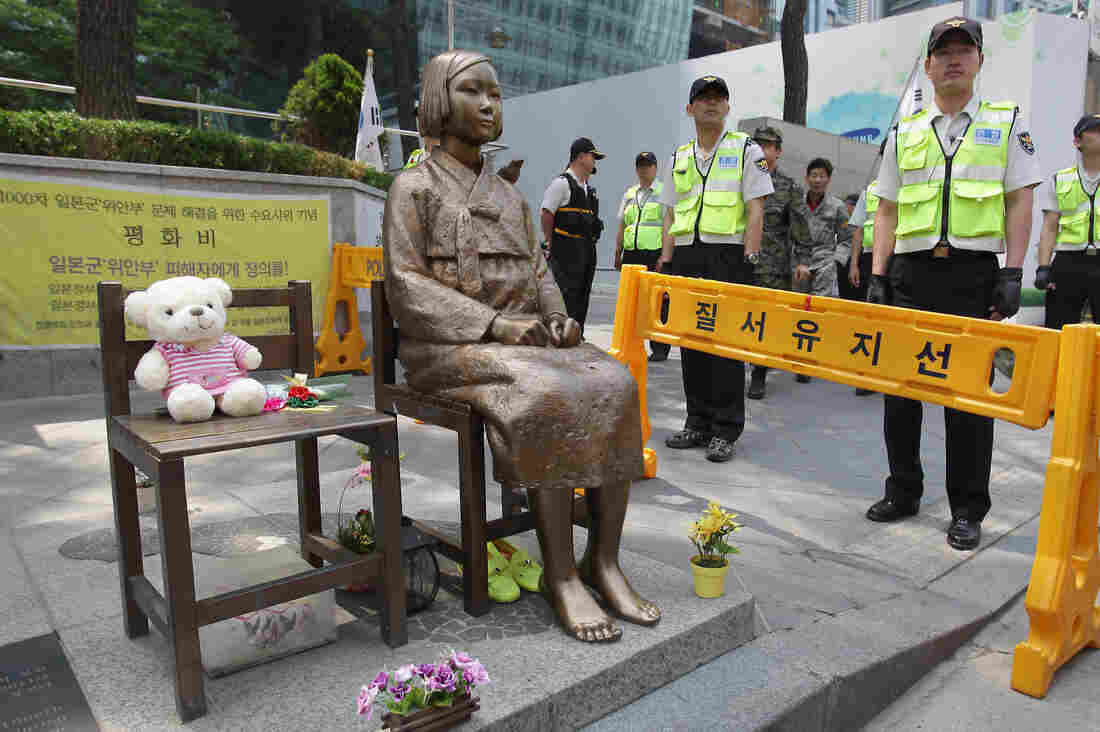 South Korean police stand guard beside a comfort woman statue in front of the Japanese embassy in Seoul in May. The Southern California city of Glendale will dedicate an identical statue on Tuesday. Chung Sung-Jun/Getty Images hide caption 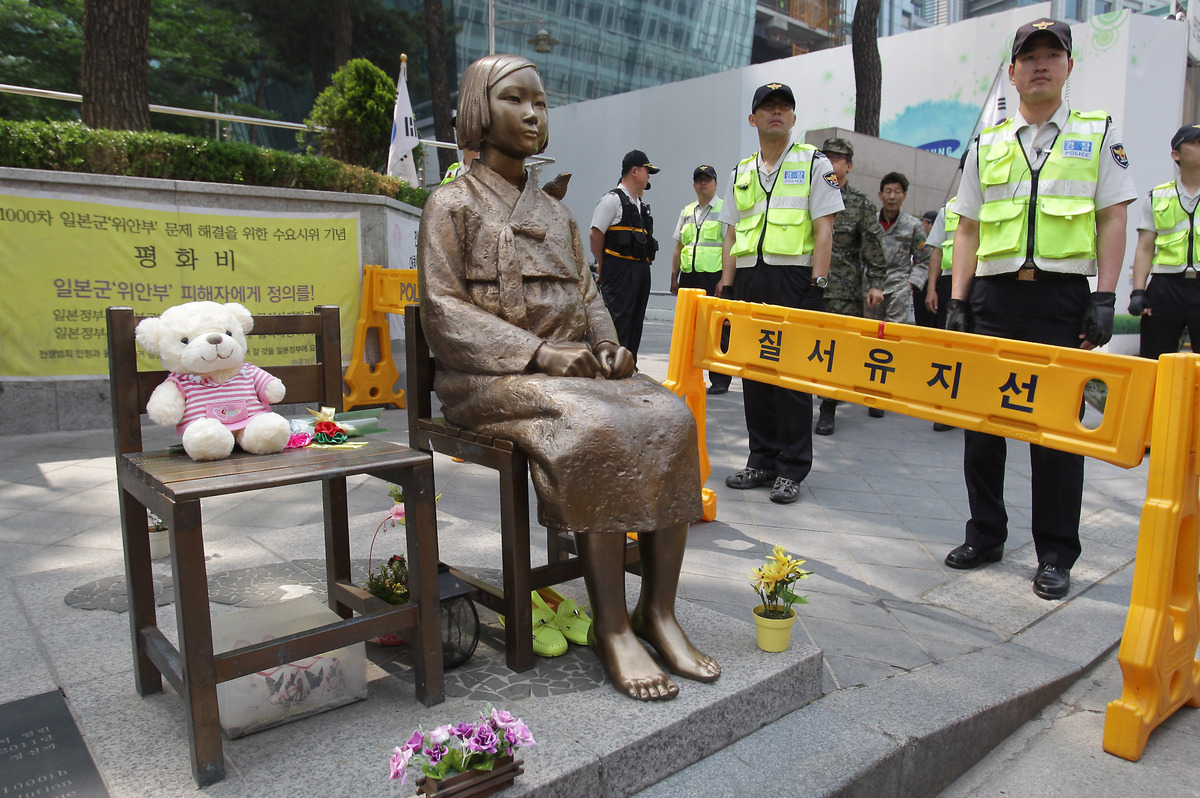 South Korean police stand guard beside a comfort woman statue in front of the Japanese embassy in Seoul in May. The Southern California city of Glendale will dedicate an identical statue on Tuesday.

For decades, Koreans have been pushing to preserve the legacy of women forced to provide sex to Japanese army soldiers during World War II. Glendale, Calif., will dedicate a statue memorializing the victims, known as "comfort women," on Tuesday. But the statue has spurred controversy in this Southern California city, where some area residents say it is a divisive reminder of the horrors of war.

The sculpture is a bronze statue of a young girl. She looks about 14 — around the same age as many comfort women when they were forced into military brothels run by Japan's imperial army.

Ok-seon Lee, 86, was one of them. She's in California, visiting with Korean-American activists. These activists don't say "comfort women" when she's around. Instead, they call her halmoni, Korean for "grandmother."

As she tells her story, Lee stares out at no one through her red-tinted glasses. She's back inside her darkest days, decades ago. Lee says she was taken to a facility in Yanji, China, at age 15, where she was abused for three years until the end of the war.

"The comfort station where we were taken was not a place for human beings to live," Lee says through an interpreter. "It was a slaughterhouse. I'm telling you, it was killing people."

Lee, who lives near Seoul with several other former comfort women in a facility called House of Sharing, has many disturbing stories. She tells one about being stabbed by a Japanese officer, and raises her arm to expose a scar a few inches long just below her right wrist.

"So I blocked the blade like this," she recalls. "And I was enraged, because I didn't die. You can't imagine how agonizing it was."

Historians say as many as 200,000 women from East Asia were trafficked as comfort women during the war.

"It is really necessary that we remember the rights that were violated, and the monument will be there to remind people not to repeat that history," says Won Choi, coordinator for the Korean American Forum of California, the group that raised the funds for the Glendale memorial.

The statue in Glendale is an exact replica of one in Seoul, South Korea, that sits right across from the Japanese embassy there. That "peace monument," as it is called, has become a focal point for dissent between Japanese leaders and Korean victims. 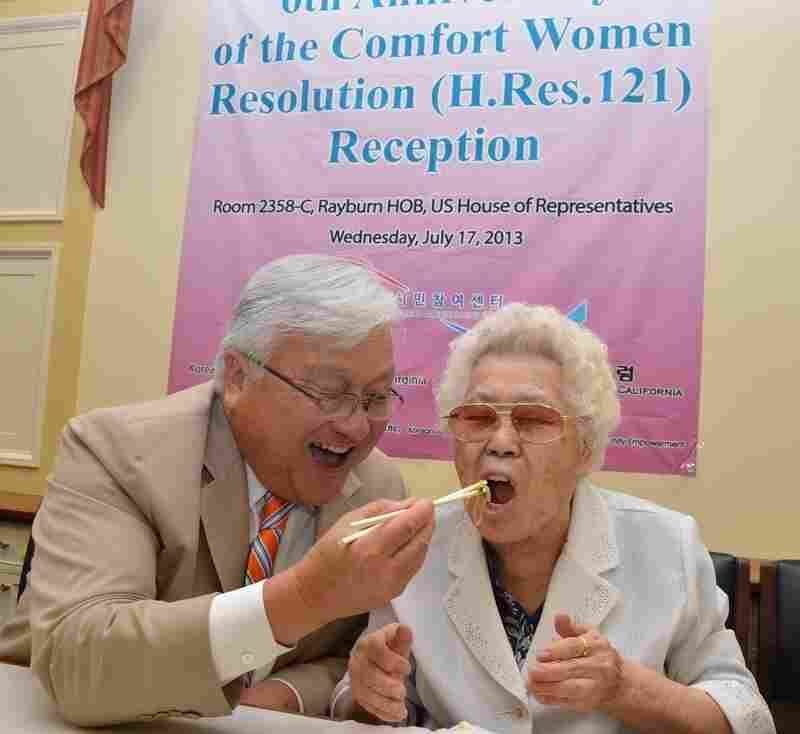 Rep. Mike Honda, D-Calif., and Ok-seon Lee, who says she was forced into sex slavery during World War II, celebrate the anniversary of a 2007 House resolution that asks the Japanese government to apologize to comfort women. Courtesy of Won Choi hide caption

Echoes Of An International Controversy

When Frank Quintero, a Glendale City Council member, announced a plan to put the very same statue in his city's central park, hundreds of angry emails flooded his inbox — mostly from Japan.

"The tone of probably 98 percent, 99 percent of the email was total denial," Quintero says. "Not just of the comfort women issue, but the Rape of Nanking and all of the other atrocities. They're in total denial."

"The story told by Koreans about comfort women is not based on the fact[s]. It's a kind of, say, manufactured story," says Koichi Mera, one of a few dozen Japanese-Americans who showed up at a recent City Council meeting to oppose the monument.

Yoshi Miyake, who also attended the meeting, says the women were working voluntarily. That claim flies in the face of the evidence, but has even been suggested by Japan's prime minister, Shinzo Abe.

"These girls were allowed to refuse customers if they want to," Miyake says. "You call this sex slave?"

This isn't the first time the comfort women dispute has flared up on U.S. soil. Last year, Japanese officials lobbied Palisades Park, N.J., to remove a similar monument that was dedicated in 2010. And Buena Park, Calif., is reconsidering plans to build a comfort women memorial after a spate of emails opposing the proposal.

Japan and South Korea clash on many details about the history of comfort women. They're also at odds over Japan's responsibility to the victims. Japan did issue an apology 20 years ago, but many of its leaders have since tried to take it back.

Thomas Berger, a professor of international relations at Boston University, says some in Japan long to promote a positive image, even if that means revising the past.

"There is a belief among many conservatives in Japan that history has been used as a tool against Japan, that Japan suffers not from too much patriotism, but too little," Berger says.

But the victims say they need that history to be accepted — and taught. There are only 58 "halmonies" like Ok-seon Lee left. And like Lee, many are still traveling and speaking out.

"Why didn't I die? Why am I alive? I lived for this long, and that's why I can at least say something about this," Lee says. "But think of what sorrows the other women must have died with. We need to speak for them, too."

But Ok-seon Lee can't do this forever. She hopes monuments like the one in Glendale will be around to tell this story when she and the other women can't.