Accessibility links
On The Eve Of Gay Marriage, Not All Of Minnesota Is Ready Minnesota's first same-sex weddings will be performed just after midnight on Thursday. Outside the big cities, much of the state remains opposed to the whole idea.

On The Eve Of Gay Marriage, Not All Of Minnesota Is Ready

On The Eve Of Gay Marriage, Not All Of Minnesota Is Ready 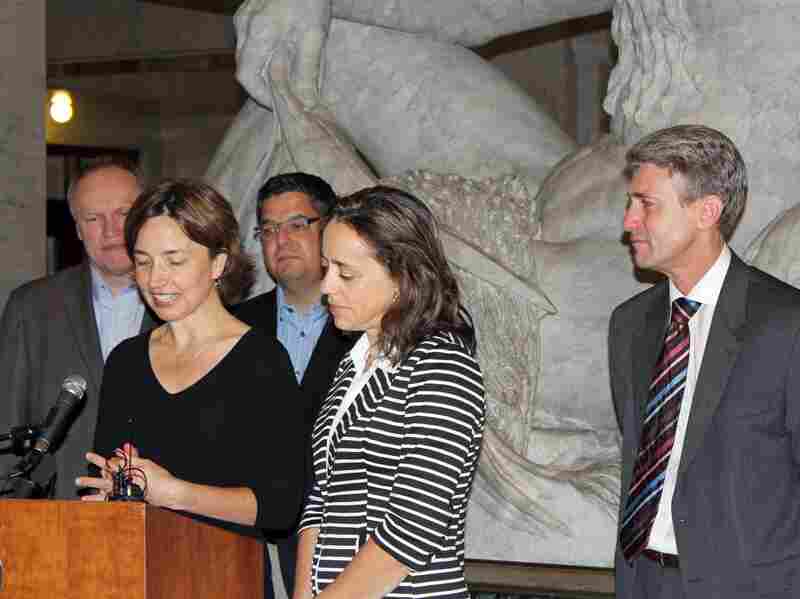 Cathy ten Broeke speaks during a news conference last month at Minneapolis City Hall. She and her partner, Margaret Miles (right), along with Jeff Isaacson (back left) and his partner, Al Giraud (back right), are the first two same-sex couples Mayor R.T. Rybak (right) will marry in the City Hall rotunda on Aug. 1. Jeff Baenen/AP hide caption 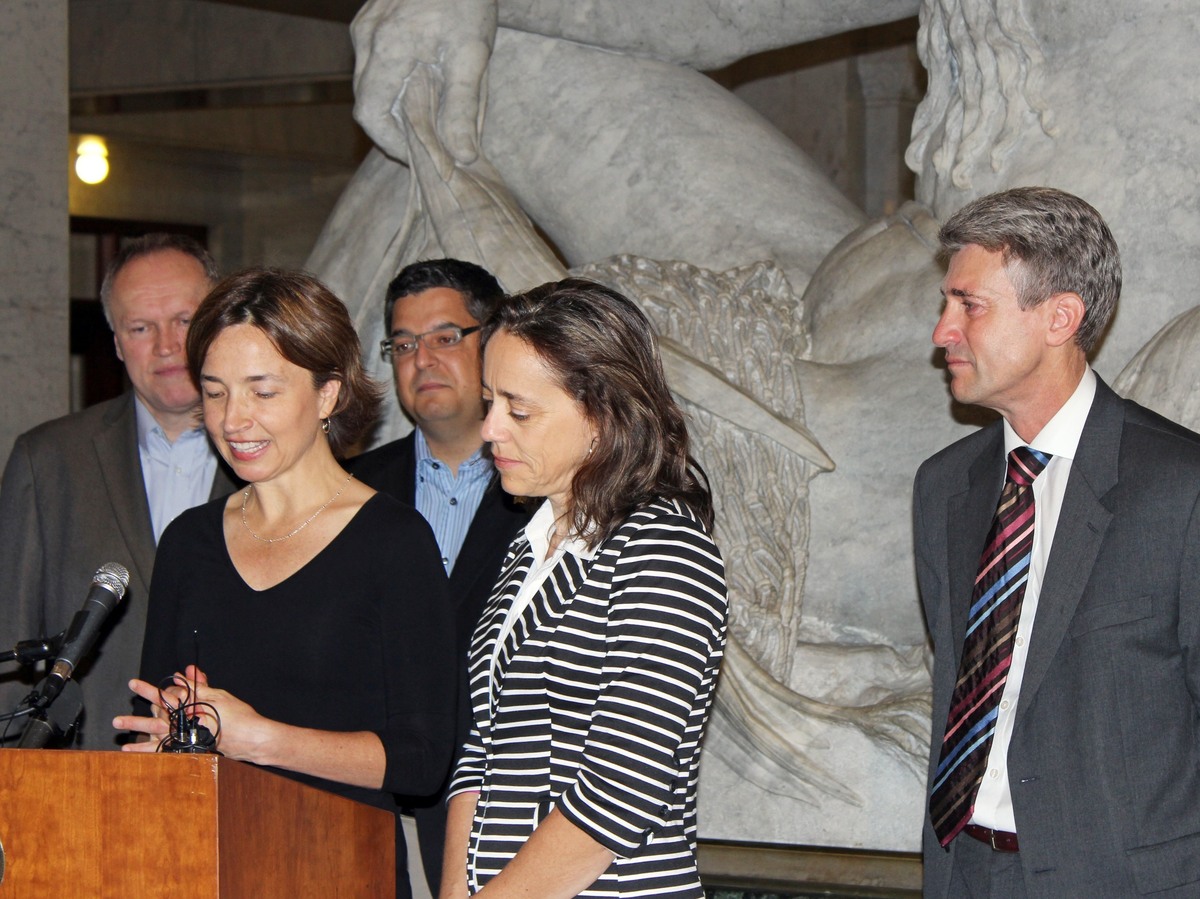 Cathy ten Broeke speaks during a news conference last month at Minneapolis City Hall. She and her partner, Margaret Miles (right), along with Jeff Isaacson (back left) and his partner, Al Giraud (back right), are the first two same-sex couples Mayor R.T. Rybak (right) will marry in the City Hall rotunda on Aug. 1.

It's going to be a party in Minneapolis.

With gay marriages becoming legal in Minnesota on Thursday, courthouses in major cities across the state will be open after midnight to accommodate dozens of same-sex couples eager to tie the knot.

"It's good for our business," says Ron Stein, a jeweler in Minneapolis, where the mayor plans to conduct weddings for approximately 40 couples. "We've had orders already."

In recent days, the Minneapolis Star Tribune has published articles about the coming "boon" to the state's wedding industry, as well as the phenomenon of same-sex couples facing the same sort of pre-wedding "jitters" long known to straights.

But many people in the state are still shocked by the whole idea. When a gay marriage ban was on the ballot last fall, only a dozen among Minnesota's 87 counties opposed it.

Most rural counties supported the idea of banning gay marriage by margins of 3-to-2, or even 3-to-1. They were outvoted statewide by the urban centers.

In May, Democratic Gov. Mark Dayton signed a bill allowing gay weddings to go forward. Some parts of the state aren't ready for it.

"Away from the cities, you're going to see a lot of legislators voted out," says Dean Walters, a teacher in Owatonna. "People in rural areas are unhappy."

Walters sat at a picnic table in Crosslake Town Square, a small park and retail development located 2 1/2 hours northwest of Minneapolis. He was having lunch ahead of an afternoon of fishing with his brother, Craig, and their dad, Bob.

The men talked with open dismay about the fact that same-sex marriage was about to become reality in their state.

Like a lot of people, Dean Walters is worried that the break from the traditional definition of marriage as the union of one man and one woman could set a terrible precedent.

He argues that there are "high-priced lawyers in the cities" who will be willing to make the argument for any odd arrangement, including polygamy. 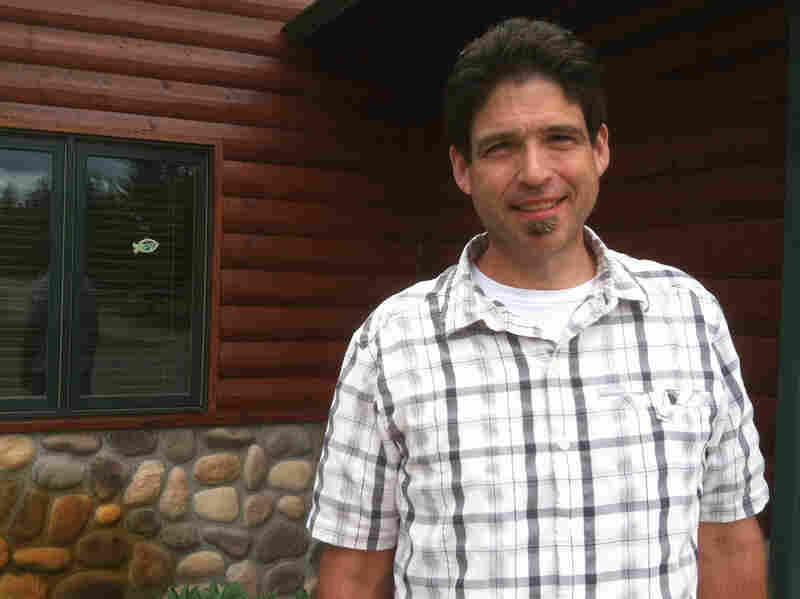 Marriage isn't about individual happiness, says Fred Cressman, but rather the attempt to give "glory to God" and the "raising of godly children." Alan Greenblatt/NPR hide caption 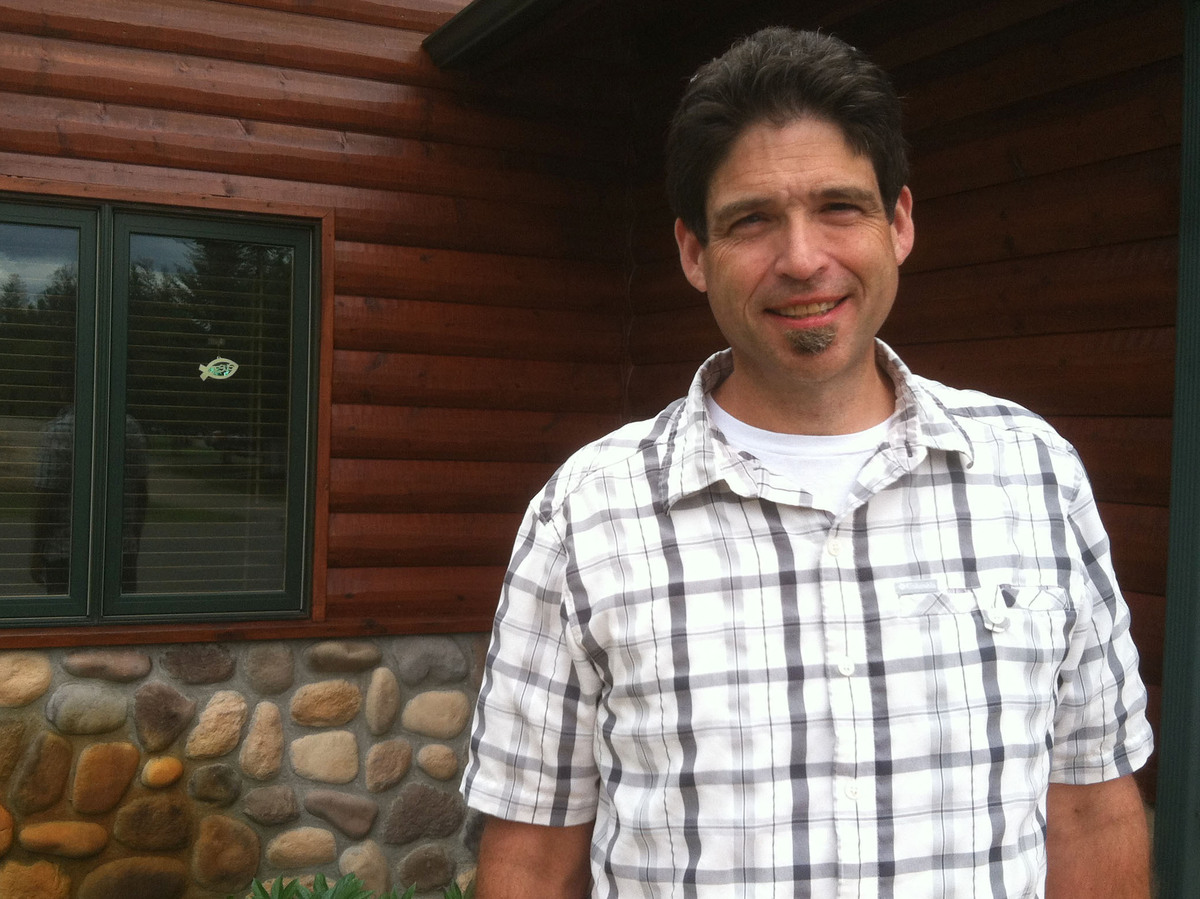 Marriage isn't about individual happiness, says Fred Cressman, but rather the attempt to give "glory to God" and the "raising of godly children."

His father also blames the advent of gay marriage in his state on the discrepancy between his values and those he sees prevailing in the Twin Cities.

"How the state ever passed that law is beyond me," Bob Walters says. "It was the people in the cities that got it done. It goes against everything the Bible taught us."

He was shocked when his grandson David FitzSimmons became one of four Republican House members to support the gay marriage bill. FitzSimmons had successfully amended the legislation to put the word "civil" in front of every reference to marriage, to protect religious institutions. 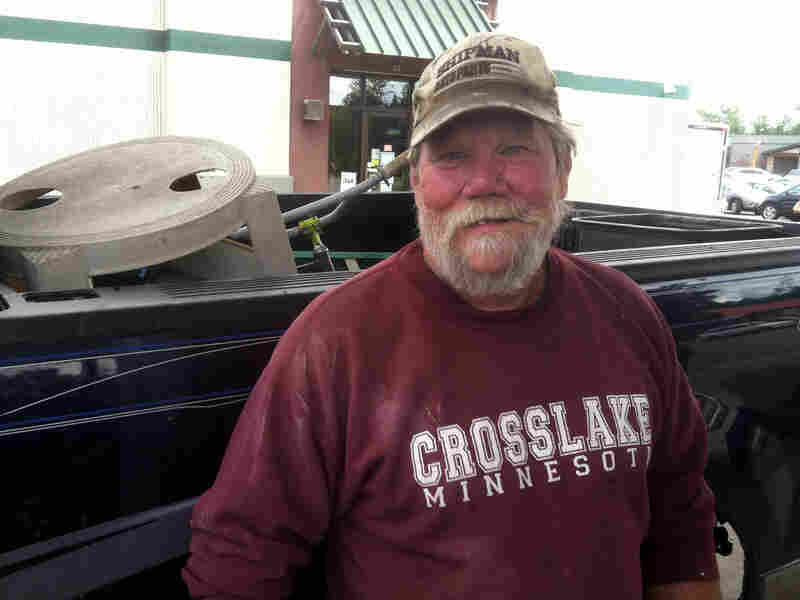 Todd Syrdal of Merrifield says he's known gay people all his life. "I have friends who are now going to get married," he says. "I have no problem with it." Alan Greenblatt/NPR hide caption 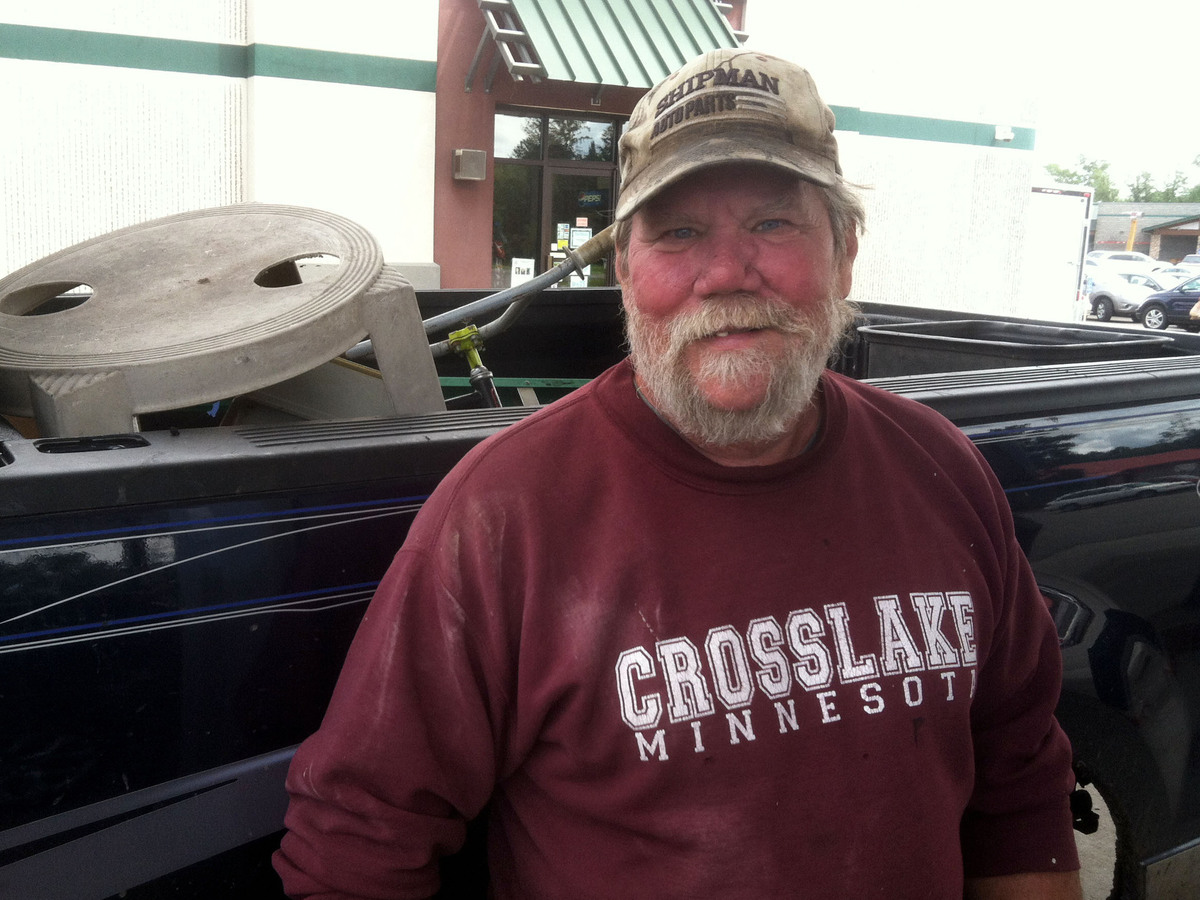 Todd Syrdal of Merrifield says he's known gay people all his life. "I have friends who are now going to get married," he says. "I have no problem with it."

In Crow Wing County, many residents refer to the Bible to explain their unhappiness about gay marriage.

"We believe the Bible is God's love letter to us," says Fred Cressman, senior pastor of the Crosslake Evangelical Free Church. "When the rubber meets the road, we're going to consult the Scripture."

All couples need to treat each other with integrity and respect, he says. He recognizes that straight couples often fall short of this mark, and appreciates that gay couples are hoping for happiness and fulfillment through marriage.

But he says that misses the point of the institution, which has a religious value beyond procreation. "The purpose of marriage is not to make an individual happy, but to bring glory to God," Cressman says.

Heading into a hardware store in Crosslake, David Johnson says that same-sex marriage not only violates "the biblical definition of marriage," but may be part of a long line of societal trends such as divorce and out-of-wedlock births that have undermined family life.

"I have great concerns when you tamper with the institution that has been the fundamental building block of societies for hundreds if not thousands of years," Johnson says. "I see consequences already from how we've damaged the institution of marriage."

End Of A Long Argument?

People have been arguing about gay marriage in Minnesota for a long time. Two men named Jack Baker and Michael McConnell applied for a marriage license in Minneapolis back in 1970. After they were turned down, they filed suit.

Yes, I believe homosexuality is a sin, but one among many people commit. When I see someone stand up at a rally and say, 'God hates gays,' that's an opinion I find offensive.

In its ruling against them the following year, the Minnesota Supreme Court said that the "institution of marriage as a union of man and woman... is as old as the book of Genesis."

The statutes the court upheld back then no longer stand. Gay marriage is now part of Minnesota law. Most people accept that it's going to stay that way — even among those who are unhappy about it.

"I'm not for it, but now that it's here, I guess I'm fine with it," says Amy Maschhoff, a small business owner in the town of Fifty Lakes.

Even in a part of the state where opposition to gay marriage runs strong, people express their tolerance for gays in general.

"Yes, I believe homosexuality is a sin, but one among many people commit," says Cressman, the pastor. "When I see someone stand up at a rally and say, 'God hates gays,' that's an opinion I find offensive."

Learning To Live With It

Many Crow Wing residents, meanwhile, are happy that gays will now enjoy marriage equality with those who are straight, seeing value in the binding commitment between people who love one another. Others, while still clearly uncomfortable with homosexuality, say that gays getting married will have no real impact on their lives.

"It makes no difference to me," says Todd Syrdal, a laborer in Merrifield. "Just don't come trying to date me."

But some still remain concerned that gay marriage, now that it's come to the state, is a step in the wrong direction.

Gene Ohman, a custom furniture builder camping along Cross Lake, says the "building blocks of our culture" are falling apart.

"The gays can do what they want — I'm not going to judge them — but our kids are confused enough," he says. "People are trying to find the happy ever after, but they won't find it without God."