Accessibility links
On The Road To Rock Excess: Why The '60s Really Ended In 1973 In the new book What You Want Is in the Limo, author Michael Walker argues that a peak year in the careers of Led Zeppelin, Alice Cooper and The Who also marked a cultural shift — from the peace, love and understanding of 1960-era music to '70s rock decadence. 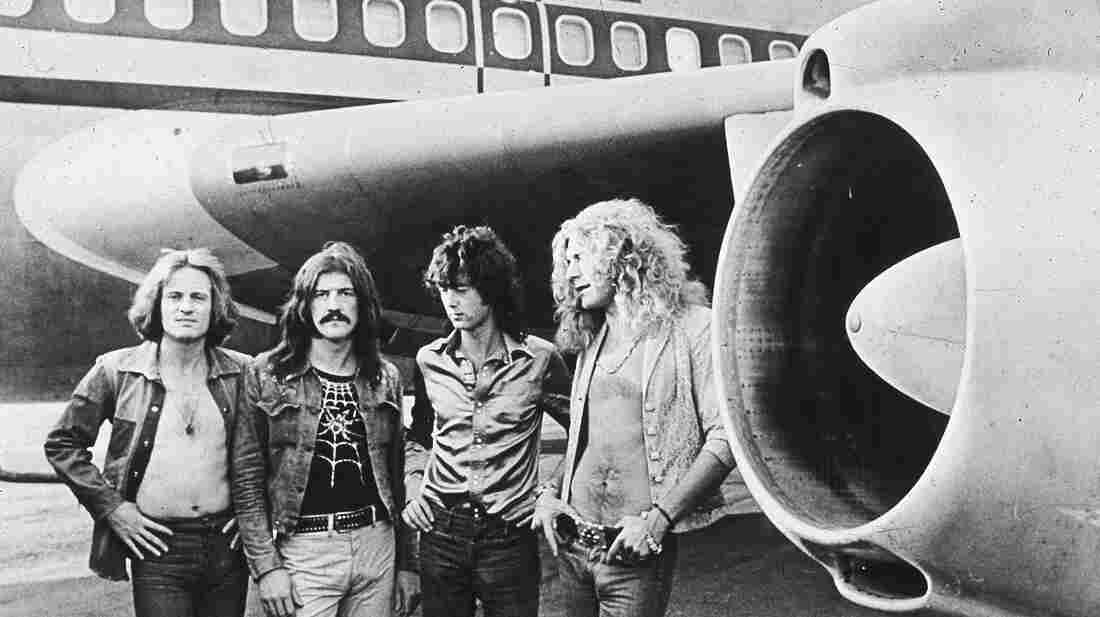 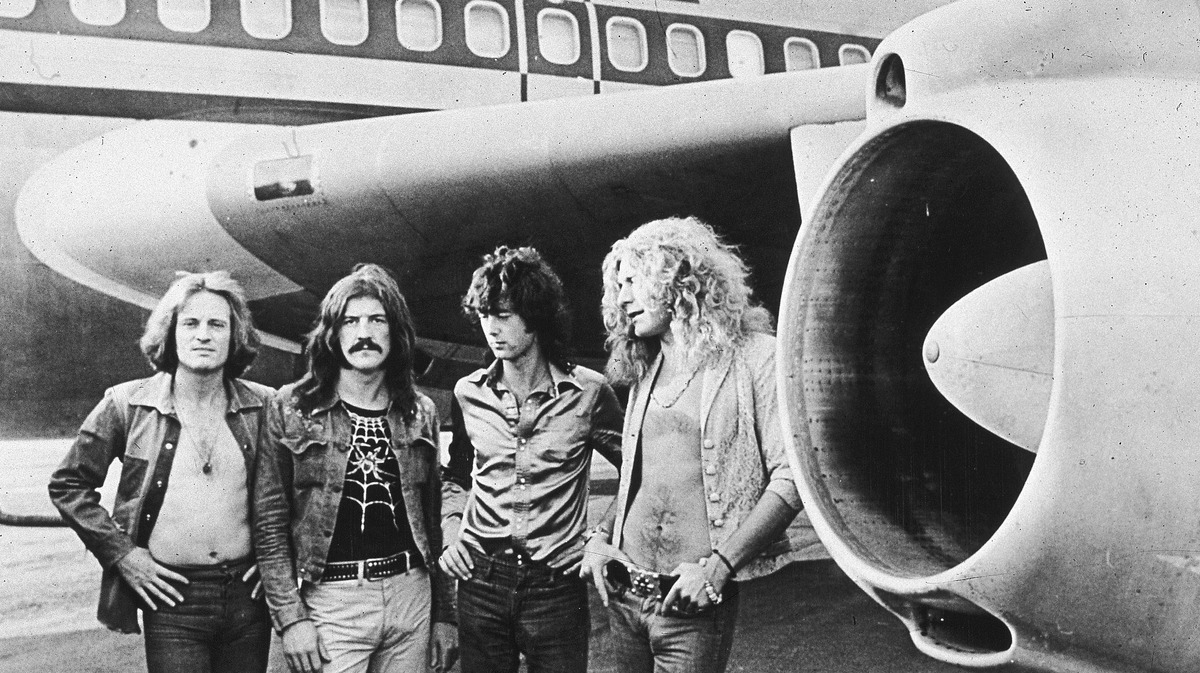 British rockers Led Zeppelin pose in front of their private plane, dubbed "The Starship," in 1973.

Author Michael Walker says that by the end of the 1960s, you could fairly say there were two generations of baby boomers: those who had experienced that decade's peace-and-love era of music firsthand, and those who learned about it from their older brothers and sisters.

"So when the early '70s got there," Walker says, "this half of the baby boom decided to have their own party, and they wanted their own bands. And they brought to prominence bands like Led Zeppelin, Alice Cooper, The Who — sort of from both generations. The late-born baby boomers, that was their moment." 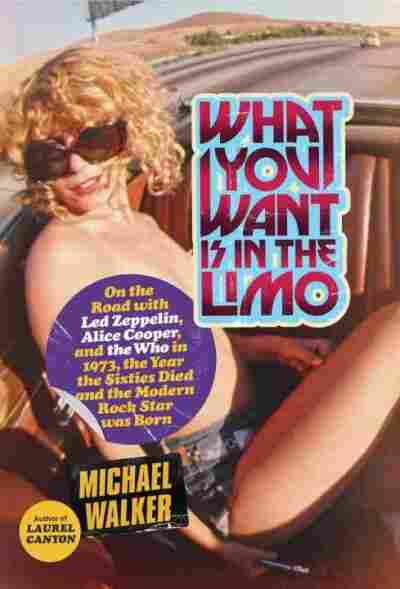 On the Road With Led Zeppelin, Alice Cooper, and the Who in 1973, the Year the Sixties Died and the Modern Rock Star Was Born

Title
What You Want Is in the Limo
Subtitle
On the Road With Led Zeppelin, Alice Cooper, and the Who in 1973, the Year the Sixties Died and the Modern Rock Star Was Born
Author
Michael Walker

That moment is the subject of Walker's new book, What You Want Is in the Limo: On the Road with Led Zeppelin, Alice Cooper, and the Who in 1973, the Year the Sixties Died and the Modern Rock Star Was Born. In it, he argues for that year as a tipping point, when big tours — and bigger money — became a defining ethos in rock music. He speaks about it here with All Things Considered host Audie Cornish.

There are so many bands that hit the road on big tours or have seminal albums in 1973. You list some of them: Rod Stewart, Bob Marley; Pink Floyd has Dark Side of the Moon; Elton John has Goodbye Yellow Brick Road; there are debut albums from Queen and Aerosmith. Why do you choose — out of this massive list and range of music — these three bands? What do they represent?

"It's partially arbitrary, because I had great affection for all three bands and those albums. But there's a very specific reason I did choose them: because 1973, unbeknownst to any of them, was going to be their peak year. Alice Cooper's Billion Dollar Babies was the culmination of the band's march towards superstardom. It finally hit No. 1 in 1973; they have a sold-out tour of North America and they break up in 1974. I mean, they barely made it out of the year before they broke up. For The Who, Pete Townshend was obsessed in the early '70s about The Who shedding their '60s past, really kind of wrapping it up in a neat bow so that they can move on into the '70s and progress as a cultural influence. And there's a song called '[The] Punk and the Godfather' from Quadrophenia, and it's basically this kid in the audience sneering up at the performers just saying, 'Look, I made you.' Quadrophenia turned out to be the last great Who album and Pete Townshend pretty much admitted it over the years.

"Led Zeppelin, unbeknownst to Led Zeppelin as well, was reaching their peak with Houses of the Holy, which was a really great, eclectic and fun album. But after [that album] and the subsequent tours, they went off the road for 18 months. They spent the '70s in a long decline and they never really got back out of it."

You argue that these are major shifts from the '60s in how these bands handle stardom, one of which is a change in the relationship between the audience and the rock star. What's going on there that's so different?

"Well, it happened in the '60s. There really was no barrier between audience and performer. That was part of the ego deflection that was going on in the '60s, this collectiveness."

There was generational solidarity?

"Yes, generational solidarity is happening; Woodstock happened. And the record companies got a look at 300,000 people showing up in a meadow. And Peter Rudge, The Who's road manager and co-manager in 1973, said that the minute they got a look at that, the record business — which had, up until then, been kind of a cottage industry — suddenly realized there was lots and lots of money to be made here. And so, the concerts started getting upscaled from ballrooms and old theaters like The Fillmores East and West in New York and San Francisco into essentially sports arenas that held 14[000] or 15,000 people. At the same time, when these tours are morphing into these big tours in big arenas, the backstage pass becomes a necessity. This whole hierarchy of backstage and front of house started to reveal itself. And the audience began to be less in tune with the performer and more sort of a supplicant to the performer."

Another shift is self-indulgence in the music itself.

"Yes, the indulgence really started to reveal itself in concert. Led Zeppelin was famous for this. John Bonham, the drummer, who was one of the great rock drummers of all time, nevertheless would sometimes take a solo that would go for 40 or 45 minutes. And Jimmy Page's guitar solos would go on, and on, and on, and on." 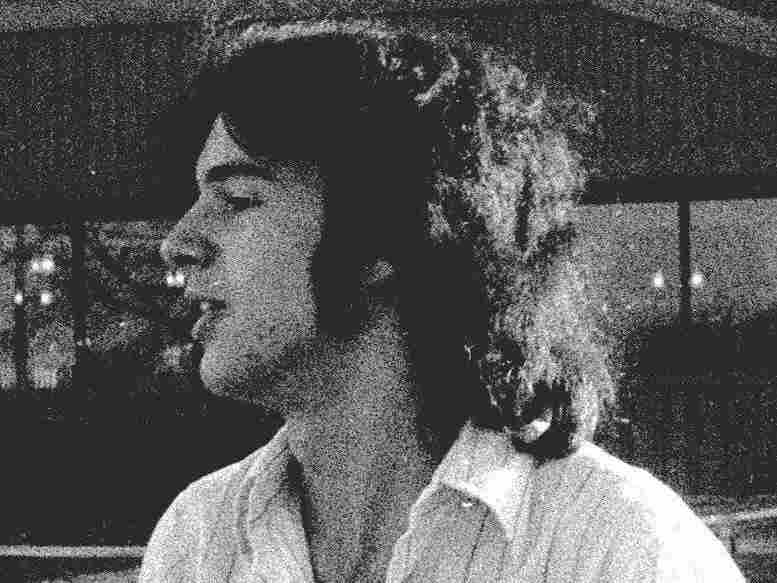 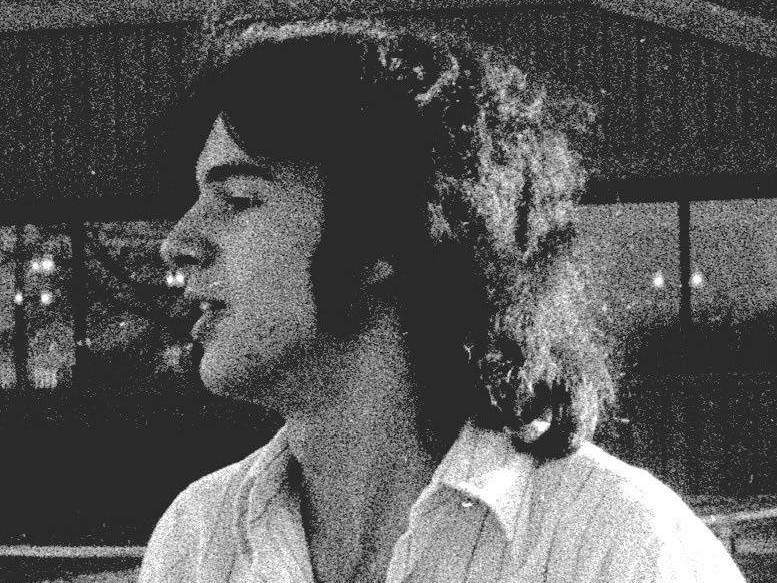 Author Michael Walker has written for The New York Times, The Los Angeles Times, The Washington Post and Rolling Stone.

This distancing you're talking about is also the introduction of the kind of, "Here's us posing in front of our jet" image, right? Here's us, you know, getting in and out of the limo. It sounds like you're saying that in the previous generation, that wouldn't have been so cool to do.

"The previous generation definitely rode around in limousines — I mean, on the very first Crosby, Stills & Nash album, there's a picture of them standing in the snow in Big Bear, Calif. Well, they had all ridden up in a limo that day from L.A. So the limos were there, but you didn't flaunt it. On the tours in '73, Bob Gruen took this iconic photograph of Led Zeppelin in front of their plane, which was called The Starship. And The Starship was a converted [Boeing] 707/720 which had transcontinental range. It could haul about 180 people normally. It had been completely renovated into this strange flying pleasure-dome with shag carpeting and this huge, long bar and an electric organ and a bedroom with a circular waterbed. And my favorite touch was this sort of Gothic fake fireplace room where the English musicians could pretend they were still in their manors back home. So there was a lot of flaunting of wealth, as opposed to trying to hide it."

In the end, is there a particular moment or song for you that really puts a nail in the coffin of the '60s?

"The Alice Cooper band, from the beginning, they were all about trying to explode the hippie myth. You know, we were into switchblades and girls and limousines and guns and we didn't apologize for it; we liked it. So there's an Alice Cooper song called 'Elected' and it was actually issued a little bit ahead of the Billion Dollar Babies album of 1973, to coincide with the 1972 election. And the opening lyric to the song is, 'I'm your top prime cut of meat, I'm your choice / I wanna be elected / I'm Yankee Doodle Dandy in a gold Rolls Royce / I wanna be elected.' This is as far away from peace, love and understanding as you can possibly get in a single song."

Read an excerpt of What You Want Is in the Limo