Accessibility links
Zwetschgendatschi, A Mouthful That Captures The Perfect Plum Bavarian plum cake reminds Gesine Bullock-Prado of her mother and childhood split between Germany and the U.S. The dessert uses Damson plums, which are only in season for a short time each summer. 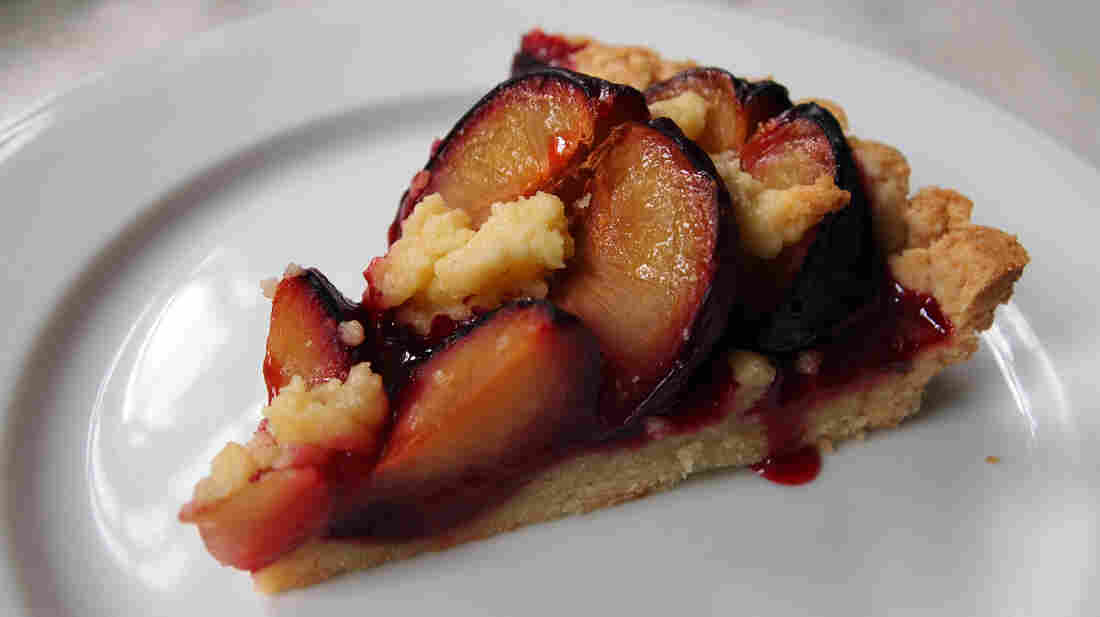 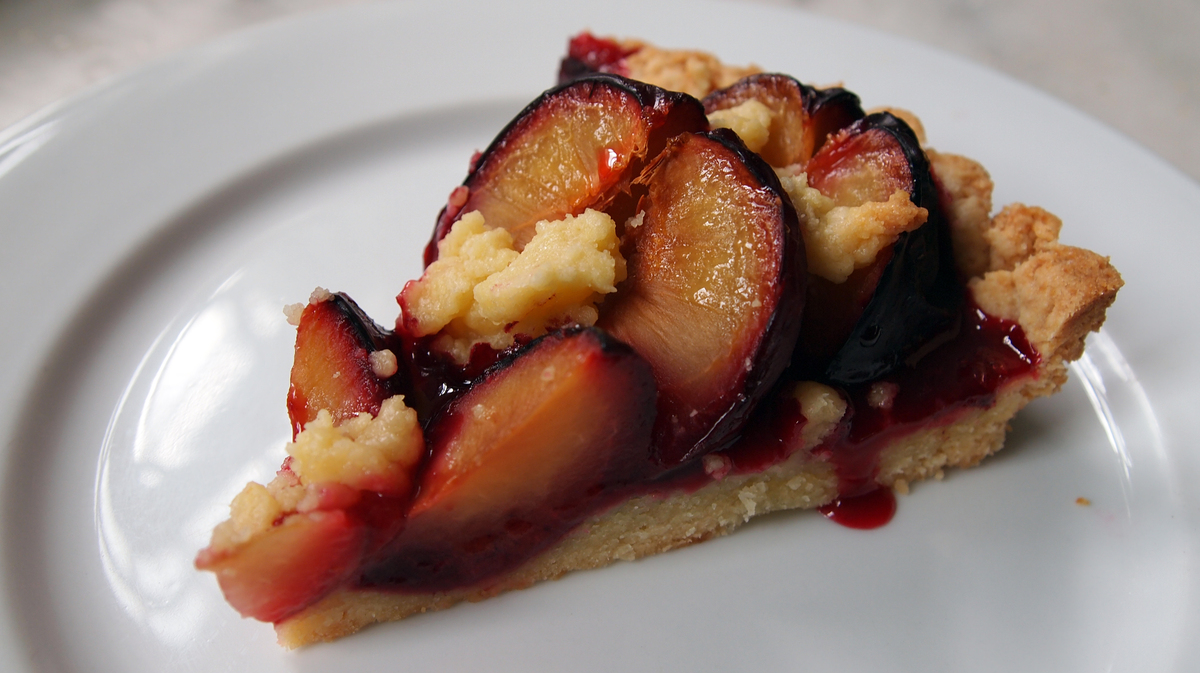 Zwetschgendatschi is the Bavarian word for plum cake. The dessert uses Damson plums, which are only in season for a few weeks each year.

If it's early August, it must be time for Damson plums. Gersine Bullock-Prado — a Vermont-based pastry chef and author of Bake It Like You Mean It — has a special place in her heart for them.

"They're not like your normal plum. They're not round. They're oval and very dark purple, almost black."

When barely ripe, the plums are firm, tart and olive green, Bullock-Prado says. "[They're] just these lovely little orbs of joy."

The fruit is the key ingredient in one of her favorite desserts: Zwetschgendatschi (pronounced ts-vetch-kin-dah-chee), which is the Bavarian word for plum cake. She shared the recipe for All Things Considered's Found Recipes series.

In additional to being delicious, it's also beautiful. Bullock-Prado says it "looks like a flower in full bloom." The cake is traditionally made on a sheet pan and as it bakes, the plum skins start to run red and dye the dough underneath a ruby red color.

She says the dessert takes her back to her childhood.

"I grew up half German and half, I call it, 'Alabamonian' — my father's from Birmingham, Ala.," she says. "My mother [Helga] was an opera singer and met my father in Germany while he was stationed there."

She says they always had Zwetschgendatschi in the summer no matter where they were — Germany or Arlington, Va. Every time they had the cake, it felt like a special occasion.

"These plums were so in the season for only about a week or two," she says. "And when we could find them in the States at the time, it was just a joy and a rarity."

Bullock-Prado ended up opening a pastry shop years later. One day, a man came in and requested a cake he'd had in Germany around World War II. After a few questions, she discovered he was talking about the Zwetschgendatschi. He asked if she could bake him one. Although she said yes, she knew it wasn't going to be easy.

"It wasn't tough because it's a tough thing to make — the tough part was that I hadn't made it since my mom died," she says. "So I was sitting there thinking, 'I don't want to do this because it'll bring back so many memories and I'm going to break down in the kitchen and I'll just look silly to my employees.' "

But Bullock-Prado steeled herself, and when the plums were in season, she set to work. Pressing out the dough and putting it the oven proceeded without incident. But when she opened oven door 40 minutes later, she lost it.

"That smell came to me — and it was my mother, my mother was in the room, and I started to weep. I mean that smell that comes from that cake, it's different from any plum cake or apricot cake; it is so specific," she says. "And since it was my mother's joy to make in the summertime, it was Helga coming from the oven."

When her employees came into the kitchen to see what was going on, they assumed something must have exploded in the oven, "that'd I'd done something horribly wrong," she says.

"But ... I'd done something incredibly right," she says. "It was just sad and fantastic all at the same time."

Bullock-Prado used traditional plums in the version pictured here because the Damson variety weren't quite in season. 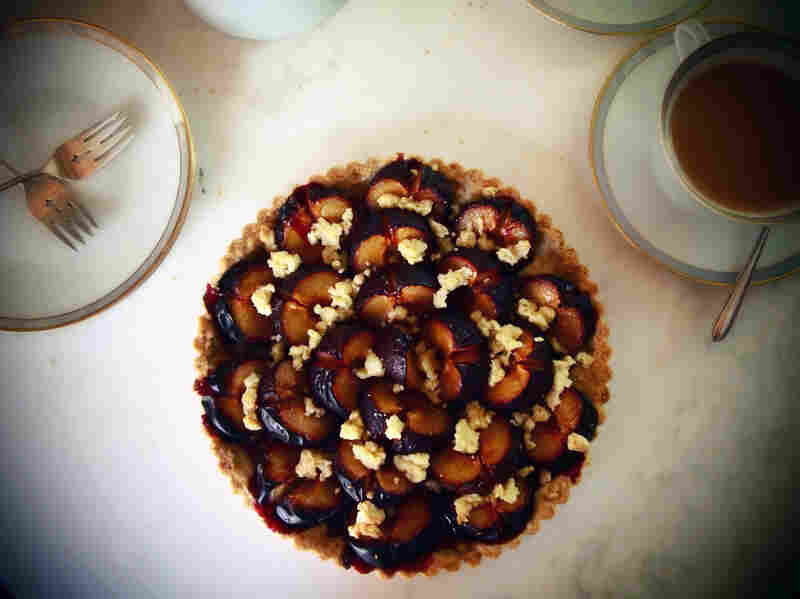 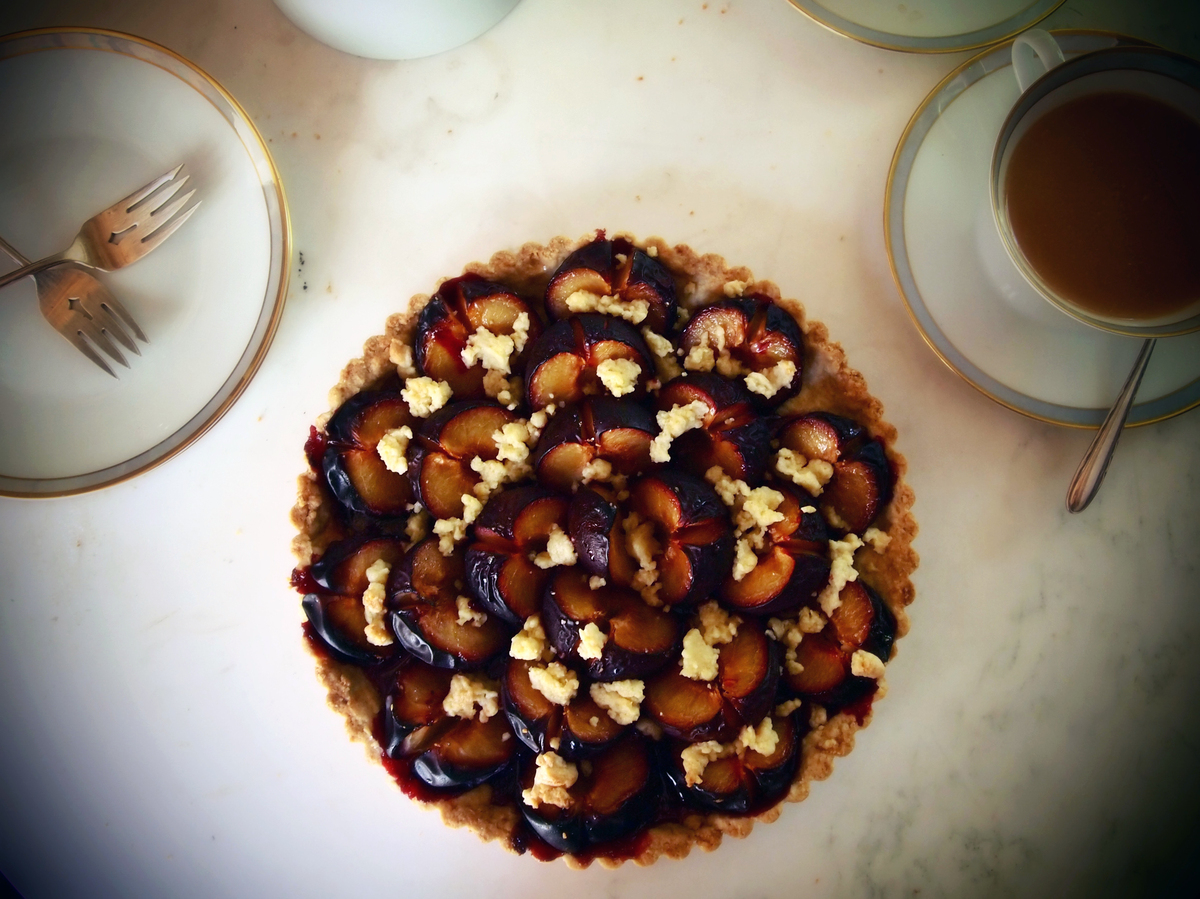 Preheat the oven to 350 degrees. For the crust, using the bowl of a food processor fitted with the blade attachment, pulse together the flour, cornstarch, sugar, and salt. Add the butter and pulse until the mixture resembles coarse cornmeal.

In a small bowl, whisk together the egg yolk, sweetened condensed milk and vanilla. Slowly add the egg yolk mixture to the flour mixture while pulsing; continue until the dough just begins to come together.

Turn the dough out onto a lightly floured surface. Gently knead it until the dry ingredients are fully integrated and the dough holds together, being careful not to overwork it. Press the dough into a disk and wrap in plastic. Refrigerate for at least 30 minutes.

Spray an 8-inch fluted tart pan with nonstick cooking spray. Crumble the majority of the dough into the tart pan and gently press onto the bottom and up the sides so that you have at least 1/8 inch of crust all around. If you have extra dough left over once you've completely covered the tart pan, set it aside.

For the filling, split each plum along the natural seam and remove the stone, leaving the plum still hinged on the backside like a little book. Cut a 1/4-inch notch at the top of the plum, where the stem once was. Why? Because that's how my mother and Omi did it.

Arrange the plums upright on the uncooked dough, flesh side facing in. If you have any leftover tart dough, crumble it evenly on top of the plums. Sprinkle the raw sugar over the plums as well.

Bake the tart until the sides of the dough are golden brown and the plums are tender, about 45 minutes. If the plums begin to brown before they are tender, carefully cover them with aluminum foil and continue baking until the juices of the plums start running.