Accessibility links
Glacier Helps U.S. Ski Team Drift Ahead Of Competition The U.S. cross-country ski team is in the best position to win an Olympic medal in more than a quarter century. Its secret weapon? A pristine glacier — only accessible by helicopter — in the mountains high above Anchorage. It allows the skiers to train on snow throughout the summer. 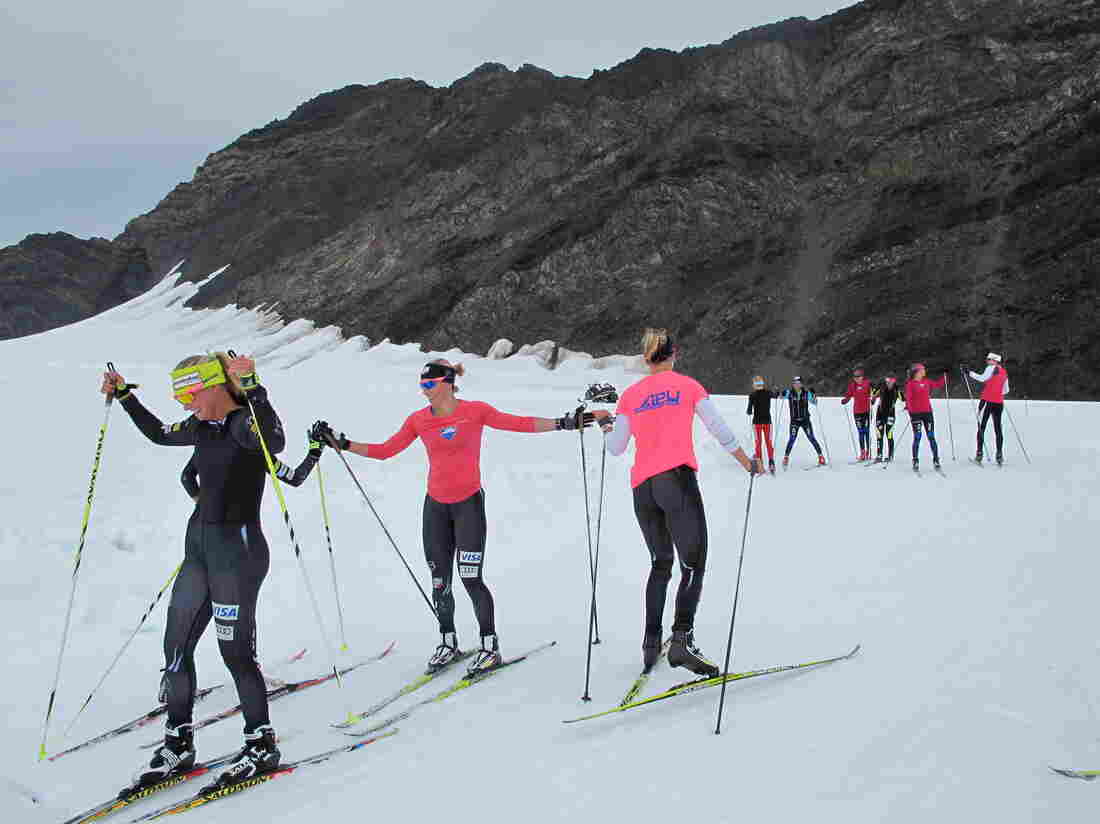 Skiers Jessie Diggins (from left), Kikkan Randall and Sadie Bjornsen finish practice. During the summer, they ski on Eagle Glacier to prepare for competition. It's one of the few places where skiers can train on snow during the summer. Annie Feidt/Alaska Public Radio Network hide caption 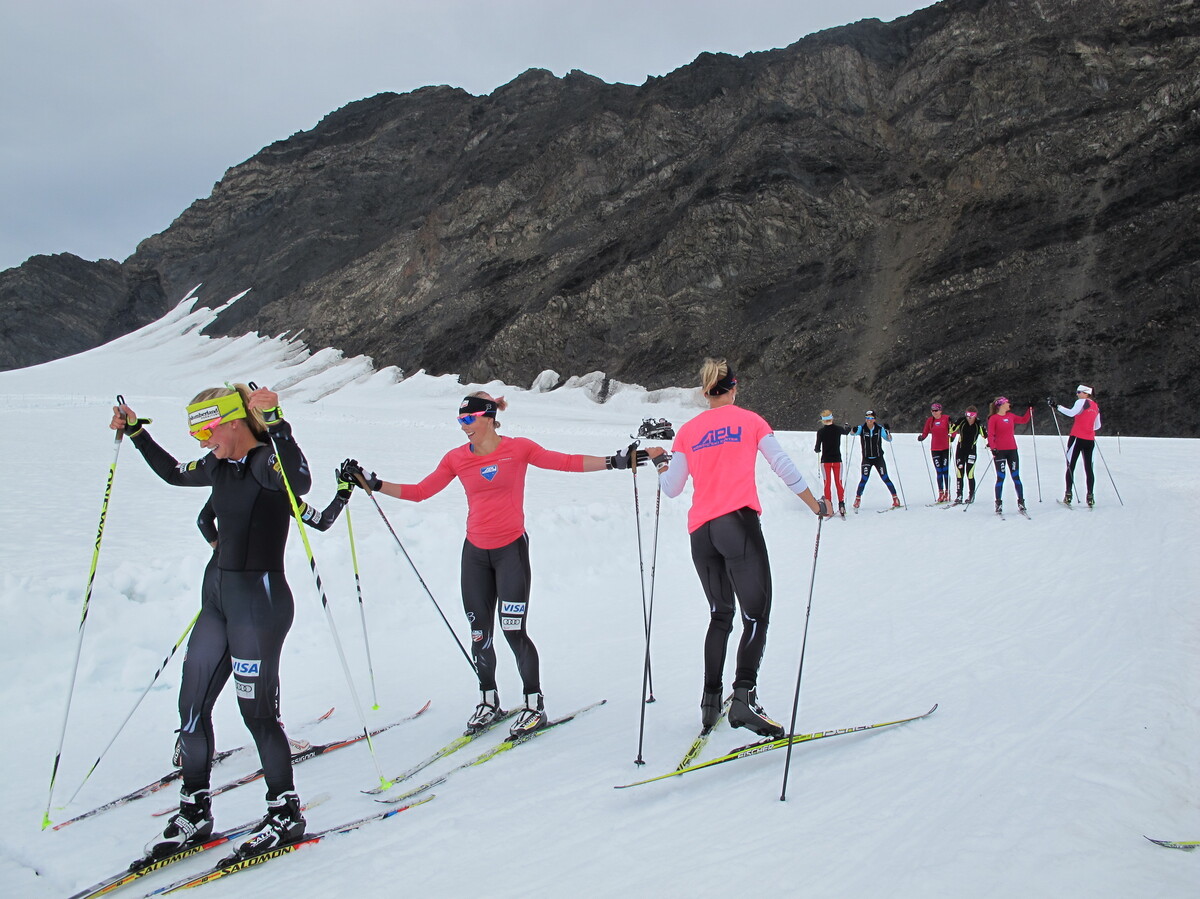 Skiers Jessie Diggins (from left), Kikkan Randall and Sadie Bjornsen finish practice. During the summer, they ski on Eagle Glacier to prepare for competition. It's one of the few places where skiers can train on snow during the summer.

The U.S. women's cross-country ski team has never won an Olympic medal. But that could change in Sochi, Russia, in February. The team has a secret weapon: a pristine glacier high above the mountains of Anchorage.

On the ground, it's summer. But as soon as the helicopter crests the mountain: winter. The snowy white Eagle Glacier stretches out for miles, rimmed by rocky peaks.

Alaska Pacific University runs training camps on the glacier every summer for its Olympic development team and other elite cross-country skiers. The athletes spend a week at a time on the glacier, sleeping and eating in a dorm that sits on shale rock just beyond the snow. They put in long hours skiing each day.

Coach Erik Flora stands at the edge of the course, offering pointers to skiers during a practice speed relay. He yells "go, go, go, go!" as the skiers begin to practice.

The glacier course is carefully probed to make sure there are no crevasses underneath. Flora designed it to mimic the Olympic venue in Russia. The snow is soft, sugary and wet after baking in the summer sun. It's not exactly first-rate skiing. But when the team had a chance to test the Sochi course during the World Cup last winter, it felt very familiar, says Alaska Pacific University skier Kikkan Randall.

"We all kind of looked at each other and went, 'This looks just like Eagle Glacier snow,' " she says. "So I think even though it's maybe not the most glorious conditions to ski in, learning how to be technically efficient in this kind of softer snow is going to help us out tremendously. And then if you've done your good work, you just get out there and do what you always do, and hopefully it's a gold medal moment."

Randall is the best sprint cross-country skier in the world and the favorite for a gold medal in Sochi. A decade ago, a top 30 finish for the U.S. was a cause for celebration. Now, a handful of the U.S. women could medal at next year's Olympics. The team proved its depth last winter when it won bronze in a four-person relay at a World Cup event in Sweden. That was an incredible moment, says Anchorage skier Holly Brooks.

"It's funny because you go around town and people are like, 'Yeah, that race you guys won.' And it's like, 'Well, actually we didn't win, we got third,' " she says, "But in our minds we won because nothing like that had ever happened before."

If the U.S. team does bring home an Olympic medal, Eagle Glacier can take some credit. It's one of the few places in the world where cross-country skiers can train on snow in the summer. The weather can be awful. The glacier attracts fog and clouds, along with wind, sleet, rain and snow. But Coach Flora sees that as an asset, says Brooks, since so many of the most important ski races happen in horrible weather:

"Erik's favorite thing to say when it's crappy outside: 'Guys, it's championship day!' " she says.

What Happens To An Olympic City After The Olympics?

At the practice championship relay on the glacier, the skiers cross the finish within seconds of each other. As they catch their breath, Flora scoops up an armload of snow and begins an impromptu awards ceremony. "And in first place, being awarded a massive piece of Eagle Glacier ice ..." he says.

The skiers don't get much time to enjoy their victory, though. Flora quickly has them back out on the course, putting in more training time on Eagle Glacier.