Accessibility links
Private Equity Fund Eyes The Business Of Pot A couple of guys with serious investment banking experience are moving into the marijuana business. They've launched the first multimillion-dollar private equity fund devoted entirely to what they call the "cannabis space." They're buying companies that provide pot-related goods and services. 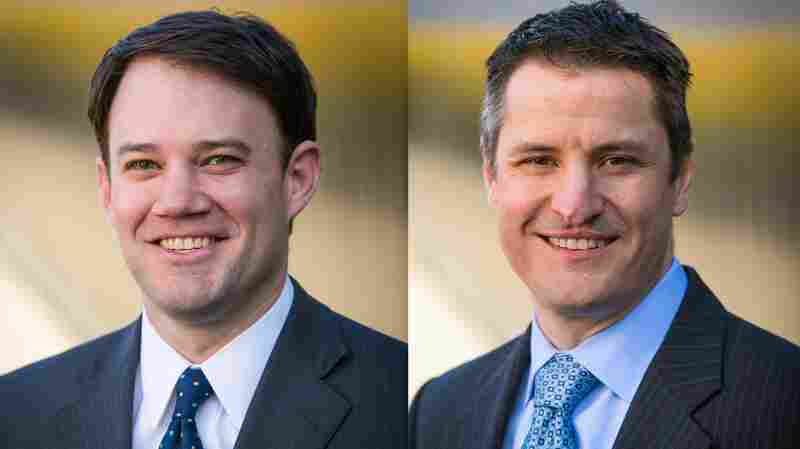 A couple of guys with serious investment banking experience are moving into the marijuana business. They've launched the first multimillion-dollar private equity fund devoted entirely to what they like to call the "cannabis space."

It started when Brendan Kennedy was working at the Silicon Valley Bank and learned of an entrepreneur who wanted to sell software for marijuana dispensaries. The idea piqued Kennedy's interest. A few days later, a radio show about legalizing pot piqued it even more.

There's an opportunity here, he thought, and picked up the phone and called his Yale business school buddy, Michael Blue. He told Blue he thought his friend needed to quit his job and come start a company in the cannabis industry.

"That's not a call you really ever expect to get," Blue says.

But then Blue and Kennedy had been bouncing ideas off each other for years. "We had always known since business school that we wanted to do something together. And Brendan said, 'Listen, we've talked about a lot of ideas, but I think it's the biggest opportunity we're ever going to see in our lifetimes,' " Blue says.

After more than a year of study, they took the plunge and set up a private equity company that would buy up firms serving the marijuana market. Their company, Privateer Holdings, has just raised $7 million from investors.

"You can't get 85 percent of Americans to agree on anything, but they agree on that. Cannabis is mainstream, and we just need to create mainstream companies now," Kennedy says.

Their firm won't touch the weed itself, but the executives still see a market for ancillary goods and services of perhaps $10 billion a year. Kennedy suggests they're less interested in companies producing grow lights than those offering insurance or specialized software — or perhaps a company making devices to deliver marijuana using steam instead of smoke.

"We're interested in companies that change the conversation," Kennedy says.

Sowing The Seeds Of A New Industry

Change the conversation. It's one of their favorite phrases. Kennedy and Blue — who dress like Wall Street bankers — are trying to catapult the industry above its High Times and Cheech and Chong image. They admit to having some concerns about potential mental health effects of pot on young adults, but believe legalizing and regulating it will make it easier to keep pot out of the hands of minors.

So far, Privateer has made just one acquisition, a company called Leafly. It's a user-driven recommendation site for marijuana strains and dispensaries. Cy Scott, one of Leafly's co-founders, says teaming up with Privateer has enabled his company to grow.

Privateer's money adds something else. Wharton professor Ethan Mollick says private equity brings credibility to the business of weed and says scholars of entrepreneurship often consider the question: How does a new industry become legitimate?

"I think you're seeing that process beginning or has already begun but gathering steam in cannabis," Mollick says.

But Harvard economist Jeffrey Miron warns: Not so fast.

Miron is a libertarian who advocates legalizing pot, but he thinks Blue and Kennedy are overstating the size of their potential market. He suggests that until marijuana is legal under federal law, it will be hard for mainstream marijuana businesses to thrive.

"To me, there's still a lot of hurdles that have to be jumped through, and it could be five years, 10 years, 20 years before the federal law actually changes. So my hat's off to them, but I don't think I would invest with them at this point," Miron says.

But others are investing, and Privateer says it will soon be in a position to raise a lot more money for its marijuana-related investment fund.