Accessibility links
Bespoke Suits And Perfect Cravats At 'Dandy' Exhibit Dandies are much more than just Yankee Doodle, and an exhibit this summer at the Rhode Island School of Design Museum celebrates these men at the cutting edge of fashion and design — from Beau Brummell to Mark Twain and beyond.

When you hear the word dandy, what do you think of?

Maybe the song "Yankee Doodle Dandy," which dates all the way back to the Revolutionary War, and compares the colonists to foppish, effeminate idiots: the dandies.

But a summer exhibit at the Rhode Island School of Design Museum, closing Aug. 18, aims to reclaim the term. It explores dandyism through the ages, linking to the cutting edge of men's fashion and style. The name of the show is "Artist, Rebel, Dandy: Men of Fashion" — which does still leave you wondering what you might see.

Brewer and her fellow curator Kate Irvin put a lot of thought into the question of what a dandy really is. "It's about being an individual, and expressing yourself creatively with certain passions and flair," says Irvin.

A man may get up in the morning and put on a suit and tie, and never knowing the debt he owes to orginal dandy, Beau Brummell, the father of modern men's fashion. "He made himself through his clothes," says Irvin. "He was born outside of the aristocracy."

And indeed, the exhibit begins with Brummell, a self-made man who joined the British Royal Regiment in the late 18th century and quickly caught the eye of the Prince Regent, the future King George IV. The king asked Brummell to dress him, which might sound strange today — but back then, it was an honor.

Irvin points to a life-sized portrait of Brummell at the entrance to the exhibit, standing tall in a knee-length navy blue military coat. "He made a career out of dressing, and dressing well," she says. "Not dressing flamboyantly. He in fact stood against the frills and the silks of the court dress, and instead embraced this very restrained image, this very subdued but immaculately tailored image."

The forerunner of today's suit was a masculine, elegant style that caught on quickly, but just as quickly came to represent a hedonistic stereotype mocked in the popular press. A row of framed British political cartoons from the mid-19th century feature effeminate fops, though Irvin says that meant something different back then. "The idea of connecting this focus on dress to femininity isn't pointing to gender preferences or sexual preferences, it's really just pointing to the fact that this person is out of place in his focus on fashion." 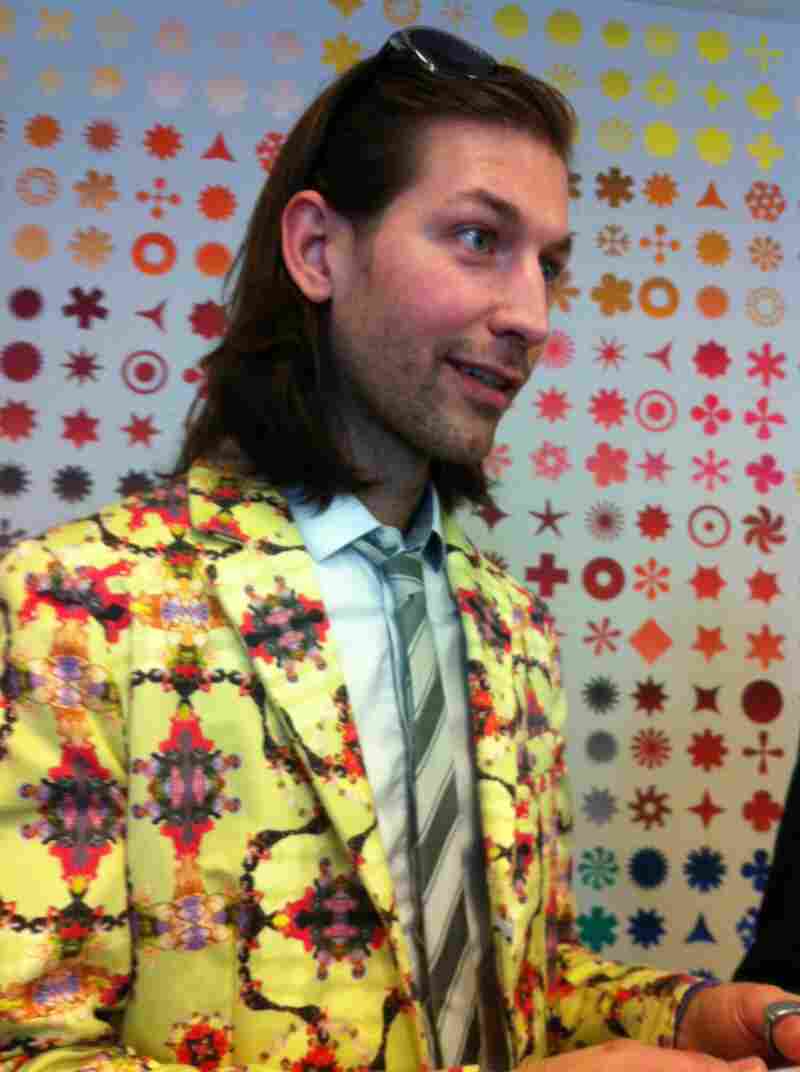 One of the best outfits at the exhibit wasn't actually part of the show: Museumgoer Aaron Peterman designed and made this suit, with its pattern of legendary drag queens on a sunny yellow background. Jacki Lyden hide caption

But here at the exhibit, all the focus is on fashion. Rounding a corner past Brummell, the showroom opens to reveal spectacularly tailored suits in colors and styles the original dandy could never have dreamed of. Curator Brewer says that for a truly bespoke suit, every single detail must be chewed over with your tailor. "It's all about the dialogue with your tailor, and that agreeance upon what that suit should become."

On display here are bespoke suits worn by Fred Astaire and John Waters, and a shirt each from Oscar Wilde and Samuel Clemens. Each visitor to the exhibit has his or her favorite outfit.

"When I came across this particular suit, I immediately fell in love with it," says museumgoer Ed Cabral, of a suit by Japanese designer Motofumi "Poggy" Kogi. The print is subdued from afar. "But when you look closer, you realize that it's Hello Kitty taking a tour of London." But where would Cabral wear such an outlandish suit? "Well, my partner is here, and we've been together for 10 years, and now that Rhode Island has passed marriage equality, I think the proper answer would be, 'Wedding.'"

Cabral's partner, Tripp Evans, has his eye on a different suit. "I think we may pop everyone's eyes out if we stood together in these two outfits, but I've got one over here," he laughs. Evans' choice is a grey and white seersucker suit with big, bold stripes — made in the 19th century, but perfectly at home in today's fashion world.

But the real showstopper isn't part of the exhibit: Aaron Peterman walks into the museum dressed to impress in a suit he designed and sewed himself. It's neon yellow with what appears to be a kaleidoscopic print of colorful flowers. But up close, "Tiny drag queens, so everyone [from] Dame Edna to Divine is on there," he says. "I literally got out of the car right across from the museum and got honked at twice. Someone was like, 'Tthat's the best suit I've ever seen!' So, you've got to save it for those perfect occasions."

Who's your dandy? One favorite definition from the exhibit comes from Scottish satirist Thomas Caryle: "A Dandy is a clothes-wearing man ... Every faculty of his soul, spirit, person, and purse is consecrated to this one object — the wearing of clothes wisely and well; so that as others dress to live, he lives to dress."