Accessibility links
How Major League Baseball Alleviated Its Broken Bat Problem In 2008, bats split into pieces once a game on average, posing injury risks to players, umpires and even fans. The issue coincided with a rapid rise in the popularity of maple bats. So Major League Baseball called in a pinch-hitter: the U.S. Forest Service. 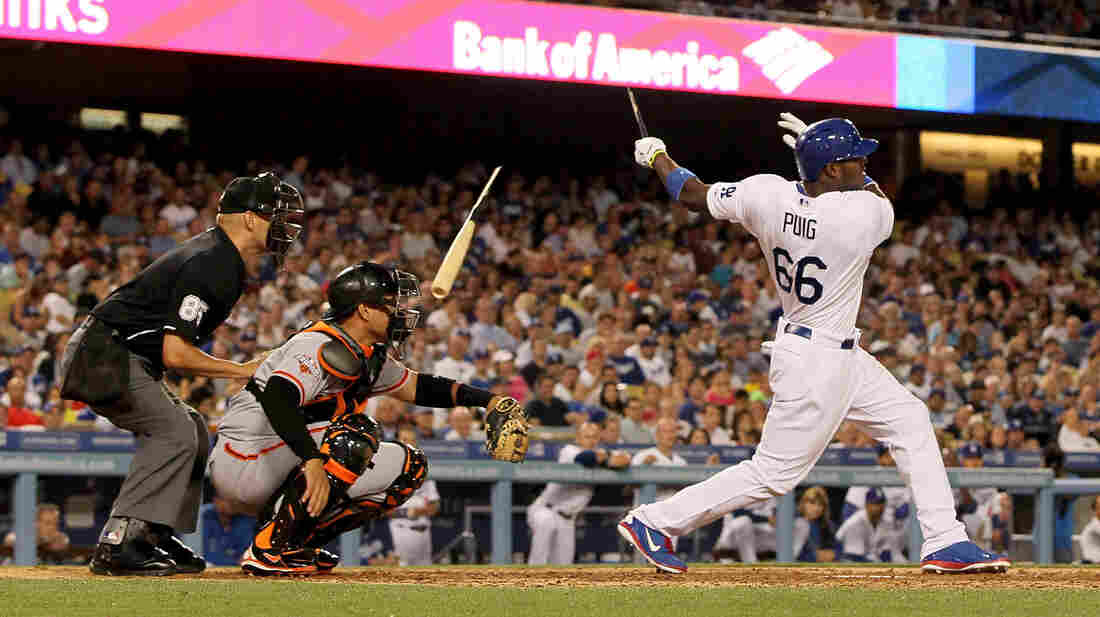 Yasiel Puig of the Los Angeles Dodgers breaks his bat on a single to right field during a game in June. The rate of such breaks has been cut in half since 2008. Victor Decolongon/Getty Images hide caption 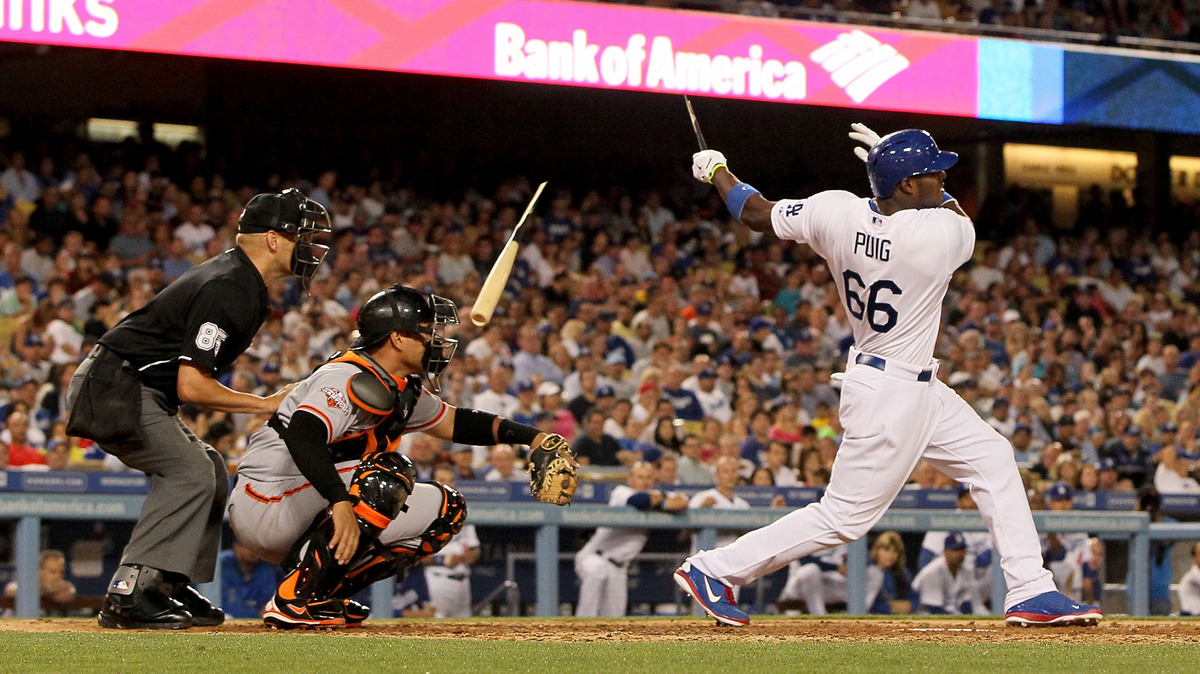 Yasiel Puig of the Los Angeles Dodgers breaks his bat on a single to right field during a game in June. The rate of such breaks has been cut in half since 2008.

Back in 2008, Major League Baseball had a problem with broken bats. That season, bats were breaking into multiple pieces at a higher rate than ever before: around once per game.

The problem coincided with a surge in the popularity of maple bats over the traditional ash.

A bat that simply cracks isn't too big a deal. But in 2008, maple bats kept breaking apart. Often, they'd break along the handle, sending the heavier upper barrel of the bat flying.

Bat shards struck players and coaches all season. A fan named Susan Rhodes was struck by a bat during a Los Angeles Dodgers game in April. Near the end of June, Brian O'Nora, a home plate umpire, was sent to the hospital after a bat left a gash on the back of his head.

That very day in June 2008, MLB's Safety and Health Advisory Committee had met to discuss the issue. The committee announced that it would consult with bat experts and conduct research with bats and their manufacturers.

One of the first phone calls went to the U.S. Forest Service, which operates a wood laboratory in Madison, Wis., where researchers study things like construction lumber, or ways to use underutilized woods, like the trees killed by pine beetles. The league called up Dave Kretschmann, a research engineer there.

"I have a sense of how wood breaks," he says. "I've broken a lot of wood over the years. So I certainly thought I'd be able to help them out."

Over the following months, MLB sent Kretschmann and his collaborators more than 2,200 broken bats, along with video footage of every break during the season. Other researchers visited bat companies to examine manufacturing techniques.

There was one main pattern to the bat breaks — they weren't splintering apart. Instead, the maple bats tended to break cleanly.

"If you looked at the handle, and the players still held onto the knob in his hand, and you looked at where it broke, there was an oval shape." Kretschmann explains.

That, he says, indicates a break along the grain of the wood. Wood doesn't hold up well to pressure applied perpendicular to the grain. Maple bats tended to have a "slope of grain" issue, where the grain sloped at an angle through the cylinder of the bat — and the pressure of hitting a fastball at just the right angle was enough to split the bat in two.

Kretschmann and the other researchers made initial recommendations in time for the 2009 season, and the rate of bat breaks have continued to drop since then. This season, it's down by half.