Accessibility links
Bracing For Google Glass: An In-Your-Face Technology The new eyeglass frames allow you to take pictures and browse the Internet while you wear them. Early adopters focused on the tiny screens have already been dubbed "glassholes." Fresh Air linguist Geoff Nunberg reminds us that in Shakespeare's time "distraction" was another word for madness. 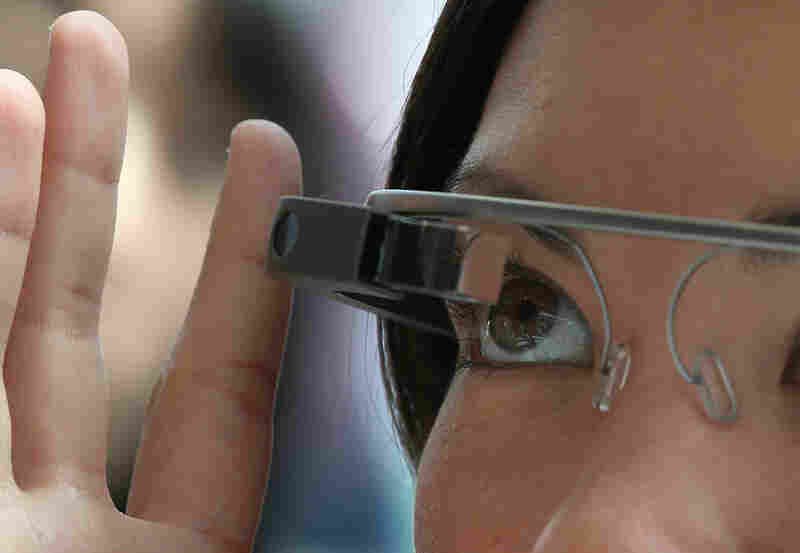 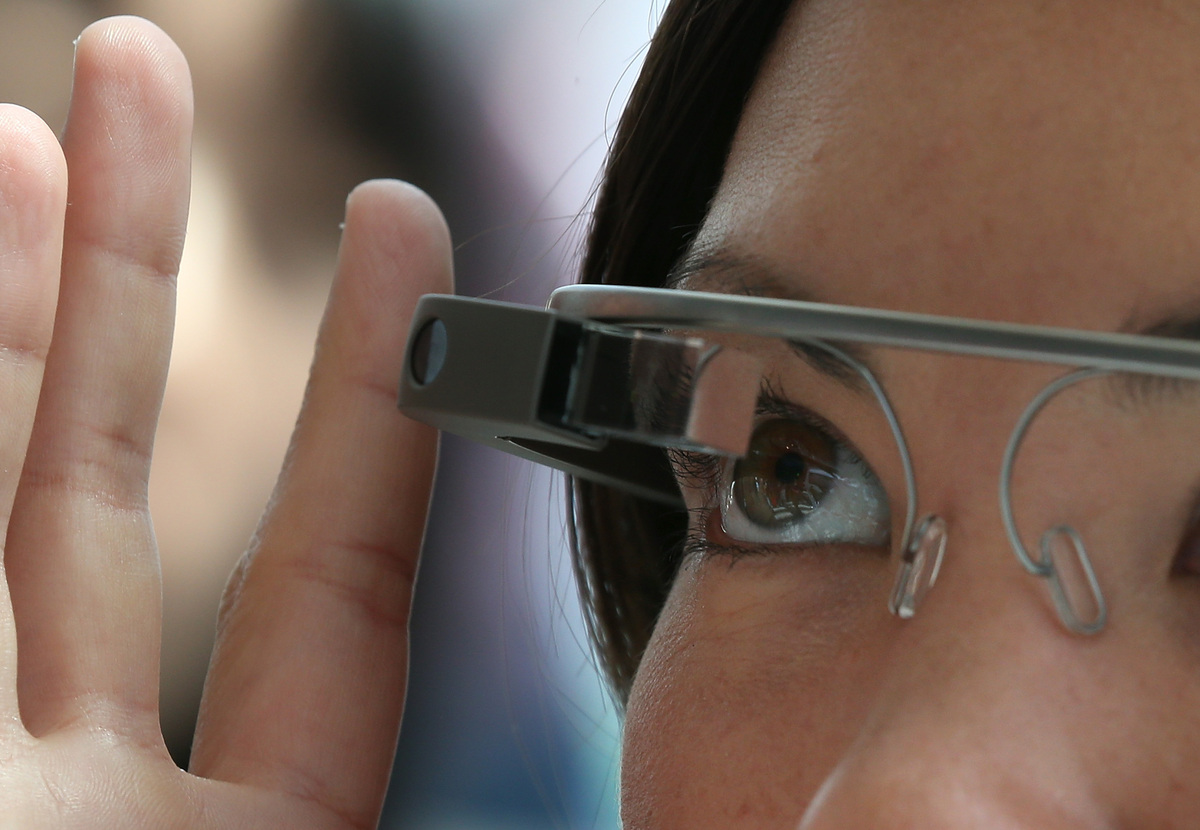 A conference attendee tries Google Glass during the Google I/O developer conference in San Francisco in May.

The likes of you and I can't buy Google Glass yet. It's available only to the select developers and opinion-makers who have been permitted to spring $1,500 for the privilege of having the first one on the block. But I've seen a few around my San Francisco neighborhood among the young techies who commute down to the Google and Facebook campuses in WiFi-equipped shuttle buses or who pedal downtown to Zynga and Twitter on their fixies.

You've probably seen pictures of one of these. It's an eyeglass frame with a camera and display tucked into the temple and a tiny track pad and speaker in the earpiece. You operate it with finger swipes, head movements and voice commands, or even winks. The effect is comically geeky. Fred Armisen demo'd Glass in a "Weekend Update" segment on Saturday Night Live in May, and he didn't have to exaggerate much — jerking and swiveling his neck to get it to boot and reboot, repeating voice commands over and over, all the while marveling to Seth Meyers how simple and unobtrusive it was.

Still, it's cool to contemplate. You're going to want one, my wife says, and she's probably right. I'm not sure what I'd do with it — actually at this stage of development neither is Google. But I could have recorded my daughter's graduation speech without having to stick a screen in front of my face. And I fancy that table talk at dinner wouldn't have to go into a holding pattern while somebody reached for a smartphone to redress some collective memory lapse. I could just say, "Hey, Glass, who starred in Return of the Scarlet Pimpernel?"

But Glass can seem a lot creepier when it's being worn by somebody else. People have started call the early adopters "Glassholes," and I can see why. A colleague was telling me how she had seen somebody she knew wearing Glass at a party and went out of her way to avoid him. She said "Look, even if he isn't going to surreptitiously take my picture, it's as if he's poised to put me on call-waiting if anything interesting comes in on his Twitter feed." Anyway, she said, why would you want to talk to anybody who would wear Google Glass to a party in the first place?

The opportunities for glassholery don't end there. Not long ago a developer announced that he had built a face recognition app for the device. Google promptly said they would block it, but there's already a workaround for that, and you figure somebody's going to get this right eventually, given the possibilities. "Hey, Glass, see if you can get me the name and e-mail of the hottie over there at the vegetable bins."

'Glasshole' is just a variant of the word we were using back in the 1980s for the jerks talking loudly in restaurants over a $4,000 mobile phone the size of a lunchbox.

The champions of progress counter as they always have: You'll get used to it, they say, the way you got used to everything else. They're probably right. After all, "Glasshole" is just a variant of the word we were using back in the 1980s for the jerks talking loudly in restaurants over a $4,000 mobile phone the size of a lunchbox. The only difference now is that the jerkiness has been democratized. The spirit of Gordon Gekko lives on in the guy behind you in the airport check-in line who's yelling at his admin over his cell. It's no less annoying, but now it's just another one of those unavoidable rents in the cultural wallpaper. And there really isn't much you can do with Google Glass right now that you can't already do with your smartphone with just a little more effort.

The Man Who Predicted Google Glass Forecasts The Near Future

But Glass really does cross a threshold. There's a yearning that has driven the whole history of human communication, the desire to experience what's happening someplace else without leaving where you are. Over the centuries, each big technological advance has reduced the effort and imagination it takes to slip from one place to the other. There is no frigate like a tablet to take us lands away. And now there's Glass, which brings the here-and-now and the there-and-then to just a twitch of the eye apart. That's as close as they can get without somebody actually going in and rewiring your optic nerves.

But the one thing we've learned in modern times is that when the here-and-now goes toe-to-toe with the there-and-then, it's invariably the here-and-now that gets hammered. I look at how many pictures I've already got on my smartphone and I know that with Glass I'd turn into one of those people I see at concerts and museums who record everything in front of them, putting their whole lives on tape delay for potential replay later on. It occurred to me it would be cool to have Glass at the ballpark so I could call up player stats while I was watching the game — augmented reality, as it's called. But who am I kidding? I'd spend the whole game swiveling my head and ignoring the play on the field.

[Glass] reminds you that in Shakespeare's time 'distraction' was another word for madness.

The real problem with Glass was pointed out by The New York Times' tech blogger Jenna Wortham. It isn't so much the glassholes as the "glassed out," the people who wear a slack-jawed look of druggy disengagement as they focus fixedly on the little screen in front of their eyes. It reminds you that in Shakespeare's time "distraction" was another word for madness.

Indeed, Glass brings us literally face to face with the fundamental metaphysical perplexity of modern life, as it was crisply summed up in the title of a classic comedy album released by Firesign Theatre back in 1969: How can you be two places at once when you're not anywhere at all?