Accessibility links
Wells Are Running Dry In Parts Of Kansas New pumping and irrigation systems made it easy for farmers to extract billions of gallons of water from the High Plains Aquifer. But now, parts of the aquifer are dried out, prompting a debate over how to preserve what once seemed to be an almost inexhaustible resource. 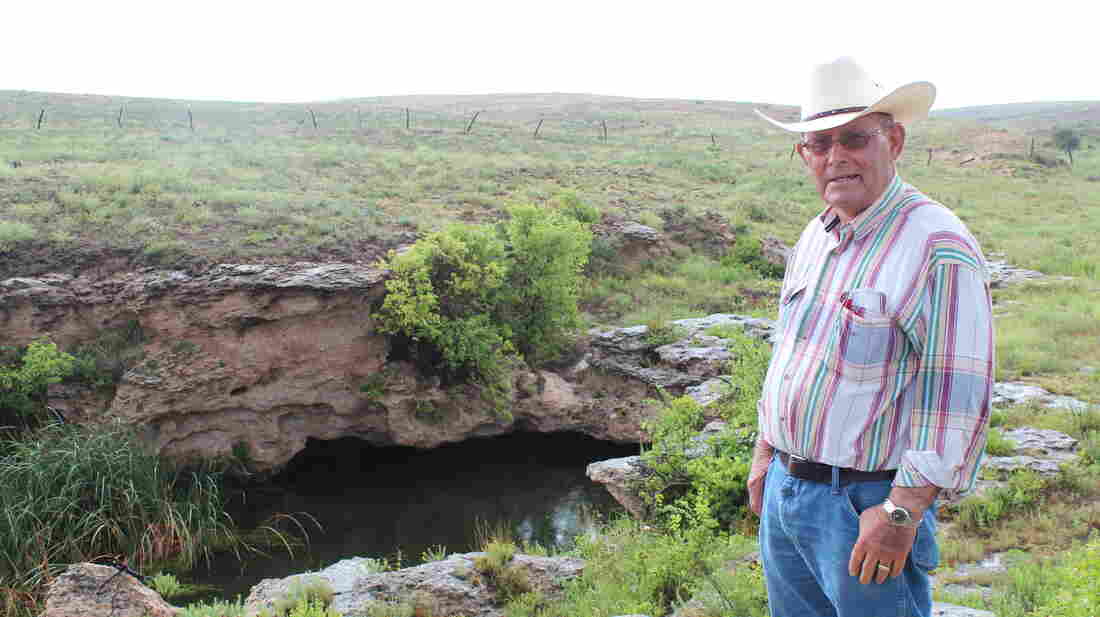 Nate Pike fears that wells, like this one that supplies his ranch with water, will dry up completely after years of water pumping and irrigation in Kansas. Frank Morris/KCUR hide caption 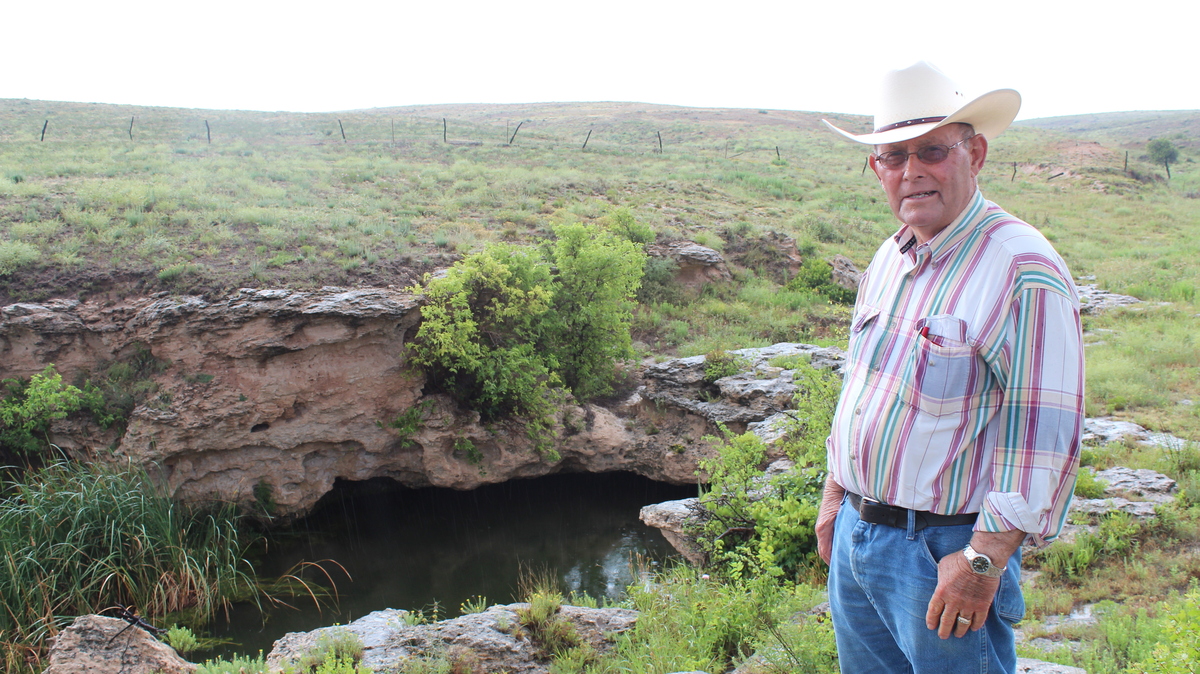 Nate Pike fears that wells, like this one that supplies his ranch with water, will dry up completely after years of water pumping and irrigation in Kansas.

Imagine enough water to fill a couple of Great Lakes, but spread under some of the driest parts of eight Western states. That was the High Plains Aquifer 60 years ago.

But now, Nate Pike, whose been riding the dry rolling ranch lands south of Dodge City, Kan., for most of his 80 years, can't even go fishing at his favorite spring called St. Jacob's Well.

"And that thing had a lot of water in it. It never went down, never changed," he says. "But as you can see now, I can't believe I can't see the water from up here."

Pike blames it on new pumping and irrigation systems. These tools made it easy for farmers to extract billions of gallons from it, and use it to grow lucrative crops on the arid land. An agricultural gold rush of sorts followed, transforming the regional economy, but also drying up wells.

An irrigation well near Copeland, Kan., run by Jesse Garetson, pumps 1,000 gallons per minute, 24 hours a day, seven days a week. There are about 39,000 other irrigation wells in Kansas. If you want a visual for that much water, picture Niagara Falls.

That calibrated deluge has sprouted a vibrant economy on this arid land. In drought years, like this one, farmers could barely grow anything here. Now, with irrigation, Garetson says, they can grow just about everything.

All the corn grown out here supplies ethanol plants and feeds dairy cows, pigs and cattle. The livestock support a big meatpacking industry — all thanks to this one resource.

The water is "more precious than gold," Garetson says.

And, like gold, this water is not renewable. Most of that torrent farmers are pumping out sat trapped under the prairie for millions of years. 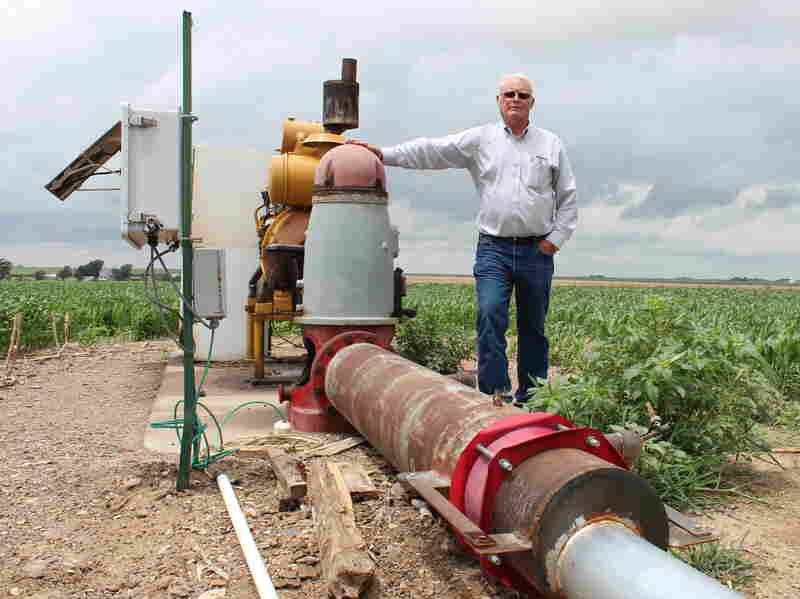 Jesse Garetson stands by one of his wells in Kansas. This one barely produces enough water to cool the engine, but many of Garetson's other wells pump more than 1,000 gallons of water per minute. Frank Morris/KCUR hide caption 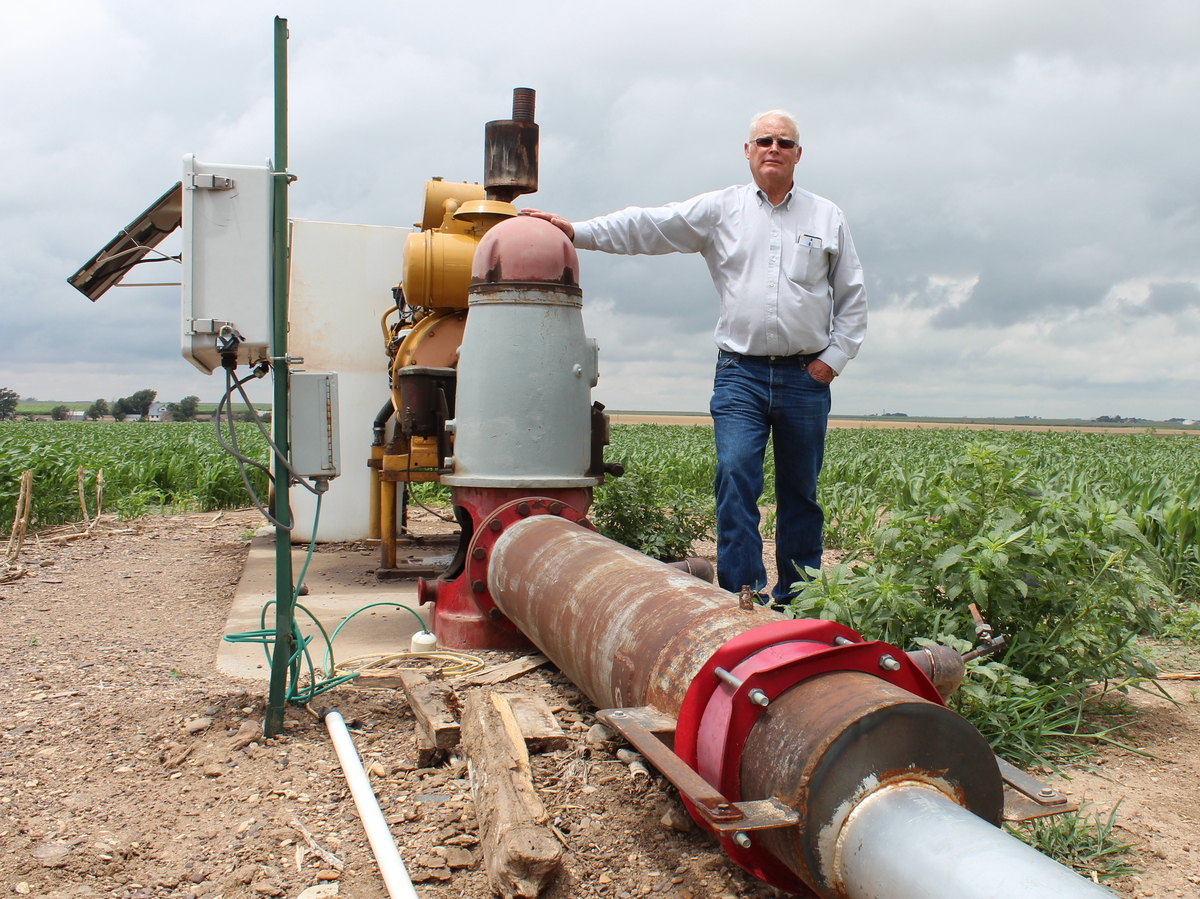 Jesse Garetson stands by one of his wells in Kansas. This one barely produces enough water to cool the engine, but many of Garetson's other wells pump more than 1,000 gallons of water per minute.

"Yeah, we're mining it, because once you hit a gold vein in a mine and you get all the gold that's in that vein, you're through with that mine," Garetson says.

Parts of this water mine are not playing out evenly, Garetson says. But in some spots, the water table has plunged more than 100 feet. Wells are running dry, and tensions are rising. Garetson is suing to protect his water rights.

"It does nothing but create neighbor problems," he says. "We, producers, perceive as long as there's water, we're pumping; it's a free-for-all."

And neighbors know it. Anthony Stevenson, who farms near Ulysses, Kan., knows his neighbors pump his water, and he pumps their water. " 'Cause they're hooked in the same reservoir," he says. "If he don't pump it, I will."

But Stevenson waters more judiciously these days. His irrigation system is efficient, delivering water to the base of his lush, 8-foot-tall plants. And this year, Stevenson planted only half his field in corn. His well produces just half the water it once did, and the lingering drought isn't helping.

Stevenson is gradually farming more like people did in Kansas before irrigation: Growing more wheat, less corn and letting dry fields sit fallow a full year between plantings to collect moisture. But his income is taking a serious hit.

The aquifer's decline hasn't gone unnoticed. Wayne Bossert runs one of the state's four groundwater management districts. Kansas stopped new development on parts of the aquifer 30 years ago, he says.

"So we prevented it from getting any worse a long time ago," Bossert says.

In 2012, Kansas began enforcing very stiff penalties for overpumping. That drew death threats against state water officials. Still, most farmers now want to manage the decline of the aquifer, Bossert says. They can't ignore it.

Water Wars: Who Controls The Flow?

Here's Where Farms Are Sucking The Planet Dry

"When that supply gets interrupted, or they start pumping air, or they start realizing that, 'Hey, that may not be there for very much longer' — that's the paradigm shift," he says, "and that's what changes their attitudes and their willingness to sit down and talk."

Bossert convened a group of farmers who came up with their own conservation plan. They've agreed to cut usage by 20 percent during the next five years, or face stiff sanctions. He expects to see the same approach elsewhere in western Kansas, because lots of farmers here want to give one more generation a shot at the good life they've had: irrigating with water drawn from the High Plains Aquifer.