Accessibility links
With Budgets Tight, Small Towns Go Without Courthouses Across the country, courthouses are closing in response to financial woes. California is in the process of shuttering almost 80 courts, many in remote locations. Litigants must now travel long distances to handle small claims, criminal cases and other legal matters. 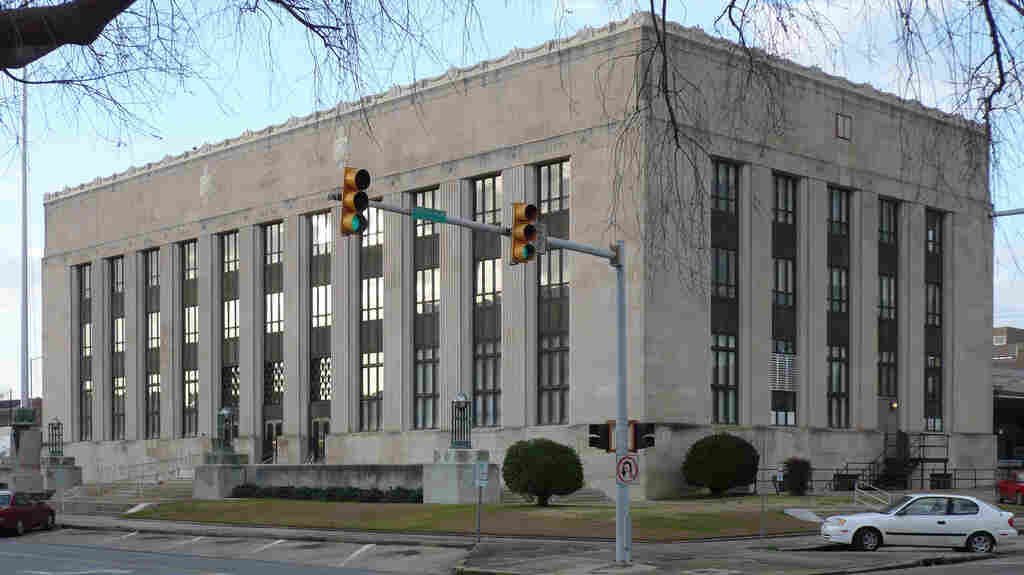 In a cost-cutting move, the federal court in Meridian, Miss., is among several federal courthouses slated to close. toml1959/Flickr hide caption 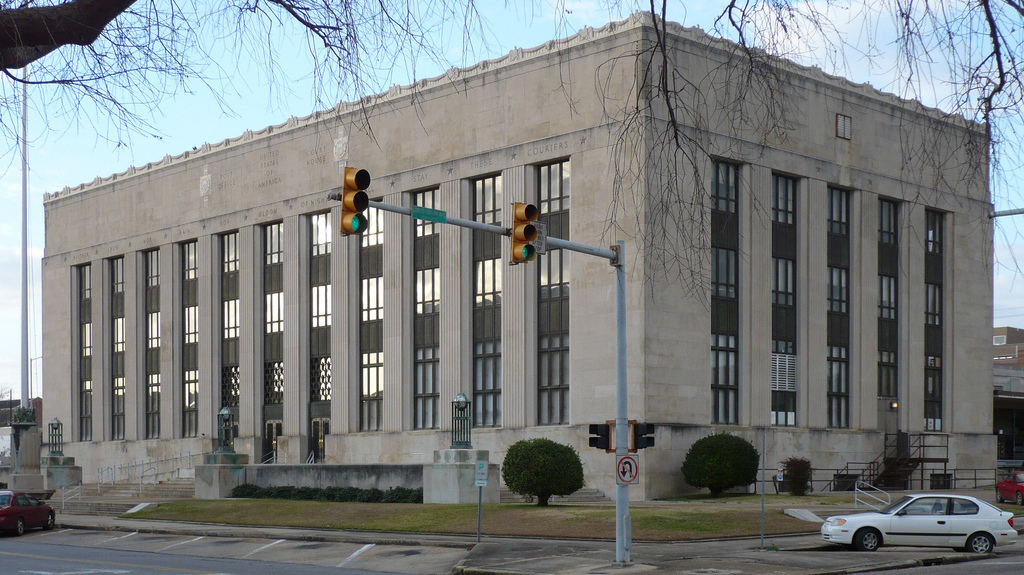 In a cost-cutting move, the federal court in Meridian, Miss., is among several federal courthouses slated to close.

In the small town of Coalinga, Calif., on the corner of 6th and Elm streets, the Fresno County Superior Court's old courthouse is still. Inside, veteran police Lt. Darren Blevins gestures inside an empty courtroom.

"In the past, when we actually had court in here, over on this wall here was the seating for the inmates or the people that were held in custody," he says.

But now, in the wood-paneled courtroom, a large flat-screen television hangs where the podium used to be. Due to budget cuts, Fresno County closed the courthouse last year. Now, it uses video streaming, via the television, to hold traffic court.

I know others have disagreed with our choice, but financially we could not do anything else but close those courts. We have to live within our budget.

For small claims cases and criminal arraignments, everyone — including police officers — has to travel more than an hour to Fresno. Last year, those travel expenses cost the Coalinga Police Department around $25,000.

For Locals, The Loss Of 'An American Experience'

This town epitomizes the case of the disappearing courthouse — a trend underway around the country as courthouses restrict hours or close their doors to save money. California is in the process of shuttering an extraordinary 77 courthouses. Many courts have also instituted reduced hours at their public service counters.

Decades ago, Coalinga had a full-time judge and held jury trials. Then it began hearing fewer types of cases and eventually the full-time judge was replaced by judges who visited occasionally.

One of them was the father of longtime Coalinga resident Katie Delano. The executive director of the Coalinga Chamber of Commerce and a former high school history teacher, Delano brought her sons to see their grandfather at the courthouse.

"My boys thought Grandpa was very tough," Delano says. "It was funny. It was a great experience, and I think we lose that — looking at juries and seeing a courtroom up close. It's like they are missing out on an American experience because trial by jury, that's what we're all about.

"Not that I want to have more crime in Coalinga," she adds. "But ... to be able to solve our issues and take care of them locally would be a great thing."

'Financially, We Could Not Do Anything Else'

Gary Hoff, presiding judge of Fresno County Superior Court, says he knew closing the courts would mean some people just wouldn't go to the courts looking for justice, but that the closures were necessary.

"We knew that closing the courts would deny people in outlying jurisdictions the availability of going to a local courthouse to take care of their business," he says. "I know others have disagreed with our choice, but financially we could not do anything else but close those courts. We have to live within our budget."

And in Coalinga, a lot of people, like Sherry Devine, who owns Sweetly Devine, the go-to restaurant in town, just don't care. "We'd get clients in here. Lawyers. There used to be a lawyer that rented upstairs," Devine says. "But ...I haven't seen a huge loss with it not being here."

But often, most people don't think about courts until they need them. That goes for people in small towns like Coalinga, or Meridian, Miss., where, 46 years ago, members of the Ku Klux Klan faced trial for murdering three civil rights workers. That federal courthouse is also slated to shut down.

And while courts are embracing technology to make up for the closures, like Coalinga's video traffic court, there is no getting past the fact that as services have shrunk, so has some people's access to justice.