Accessibility links
Libraries' Leading Roles: On Stage, On Screen And In Song In the latest installment of our library series, NPR's Bob Mondello visits some notable libraries in popular culture: Jorge Luis Borges' Library of Babel; Lucien's Library in Neil Gaiman's The Sandman; and the stacks in Buffy, Hogwarts, Doctor Who and Fahrenheit 451. 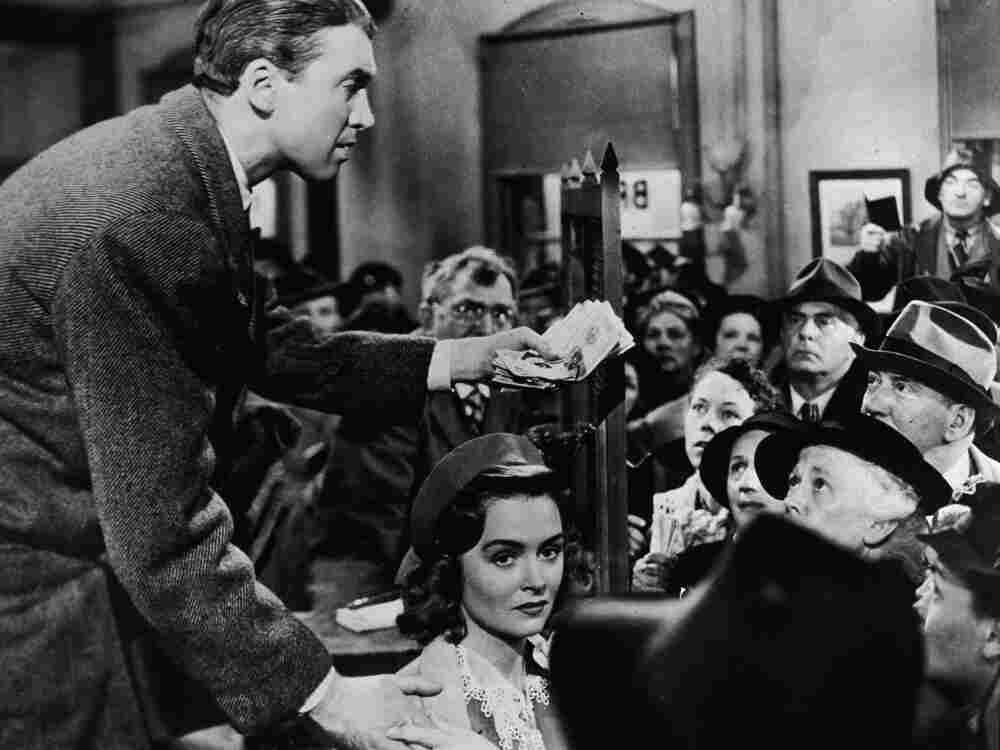 When I was 9, I spent a lot of time at a public library just down the street; I was already a theater nerd, and it had a well-stocked theater section. Not just books, but original cast albums for Broadway shows old and new. One day, an addition: The Music Man, about a salesman who was crazy about a girl named, as one song put it, "Marrrrrrrion, madam librarian."

I just assumed our librarian, who was maybe 23, was that most regrettable of midcentury things, a "spinster." (She was so much older than my baby-sitters.) Later I learned that The Music Man was spoofing that idea, by making Marian young — maybe 23 — and sexy once she let down her hair and utterly irresistible to the traveling salesman, who'd presumably had many a fling.

Star Trek-TOS: 'All Our Yesterdays'

But then of course the Spinster Librarian is a durable literary construct and hardly the only one I picked up from pop culture. Others include librarians as detectives, libraries as fortresses protecting us from ignorance, whole science-fiction worlds devoted to the storage of ideas and history. Like, say, the deserted planet in an early episode of Star Trek that seems the only remaining trace of an entire civilization.

It's hardly surprising that writers, who deal all the time with words, would find fascination in great repositories of them — Jorge Luis Borges, imagining the universe as a "Library of Babel" containing all possible books; Neil Gaiman stocking Lucien's Library, in The Sandman, with every volume anyone has ever dreamed of writing but never written; George Lucas imagining holobooks and datasticks for his Jedi Temple library; a whole universe's worth of knowledge stored in Doctor Who on a planet-sized library that contains whole continents of biographies.

On Earth As It Is In The Heavens

These are all otherworldly libraries, not much resembling the Terran ones where you can actually check out a book. But pop culture is littered with those, too. Sometimes they're pictured as dreadful dead ends, as in It's a Wonderful Life, when Clarence reveals to George Bailey that without him around, his wife Mary Hatch would never have married; instead she'd've spent lonely evenings closing up the library after everyone had gone home. (That spinster librarian thing again — fate worse than death, right?) Happily, that was the same year an eager young bibliophile was haunting her local bibliotheque in A Tree Grows in Brooklyn, trying to read every book on the shelves in alphabetical order, so she would know "everything in the world."

Knowing everything in the world would make her — well, a librarian, more or less. They know so much, in fact, that they can even beat computers, or at least Katharine Hepburn could in 1957's Desk Set. Admittedly, while she could quote Longfellow from memory, she was also a little high-strung. Happily, Spencer Tracy was around to calm her down.

The notion of librarians as obsessive and almost devout about books leads naturally to connections between religion and libraries. In literature, that's reflected in, say, the illiterate monks of A Canticle for Leibowitz, who archive what's left of civilization after an atomic war. Or the friars in The Name of the Rose, a medieval mystery in which a Franciscan realizes that a series of priestly suicides may be related to what cannot be found in the monastery's library.

"Where are the books?" he wonders, as the author turns the abbey's library into a maze, in both a literal and a literary sense, providing fun for readers and lending the stacks an air of excitement they don't always possess.

That complements the cool factor that teen fiction has bestowed on libraries, which often offer a little something extra in that genre — the dragon section Harry Potter could consult at Hogwarts, for instance, and the towering bookshelves Belle fell for before she fell for the Beast who owned them. The archive where Batgirl was a librarian. And of course, the school library perched atop a hellmouth at Sunnydale High, where the point is less getting students to read than it is giving Buffy and her vampire-slaying buddies the tools to fight for their lives.

When A School Failed A Giant, A Library Offered Refuge

There are few weapons more powerful than facts and ideas, and as libraries are full of those, they naturally appeal to firebrands. Playwright August Wilson, for instance, who wrote Fences, The Piano Lesson and the eight other plays in a decalogue that's among the crowning achievements of American theater. As a 1960s teenager, Wilson practically lived at his local library, which turned out to be great for his writing, less great for his grades. He penned one paper on Napoleon that was so well researched, his history teacher rejected it.

"He didn't think I had written it," remembered the playwright many years later, adding that at 15, this so infuriated him that he threw it in a wastebasket and stomped out of school, never to return.

Where he went instead — avoiding truant officers for three years, while getting an education good enough to inspire Pulitzer Prize-winning art — was Pittsburgh's public library.

Germaine Greer wrote that "a library is a place where you can lose your innocence without losing your virginity," and songwriters have joined poets and philosophers to offer their own takes on that notion — from Jimmy Buffett, in his song "Love in the Library," to Tori Amos, who on her album Tales of a Librarian arranged the tracks according to the Dewey Decimal System.

In songs and books and movies and art, libraries are sanctuaries, places of bustling quiet, storehouses of ideas that fuel the imagination.

That wise man was Keith Richards of the Rolling Stones, who ran up thousands of dollars in overdue-book fees.

Don't believe me? I know where you could look it up.