Accessibility links
How Gaul-ing! Celebrating France's First Resistance Fighter He may have lost a battle, but Gallic chieftain Vercingetorix won something greater: status a French national hero. Each summer, a Burgundy village holds a festival to mark the Gauls' defeat by Julius Caesar and the Roman army. 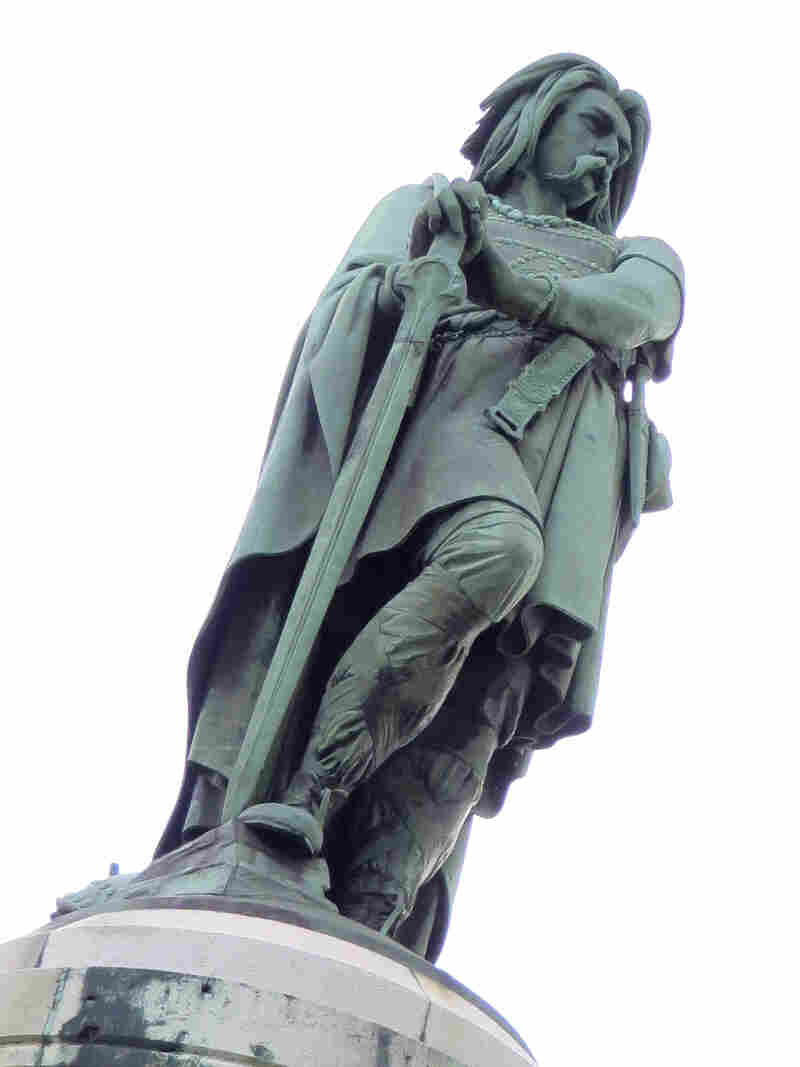 Vercingetorix, leader of the Gauls, is a national hero in France, where he is admired for his fight against invading Romans, despite his ultimate defeat. Kevin Beesley/NPR hide caption 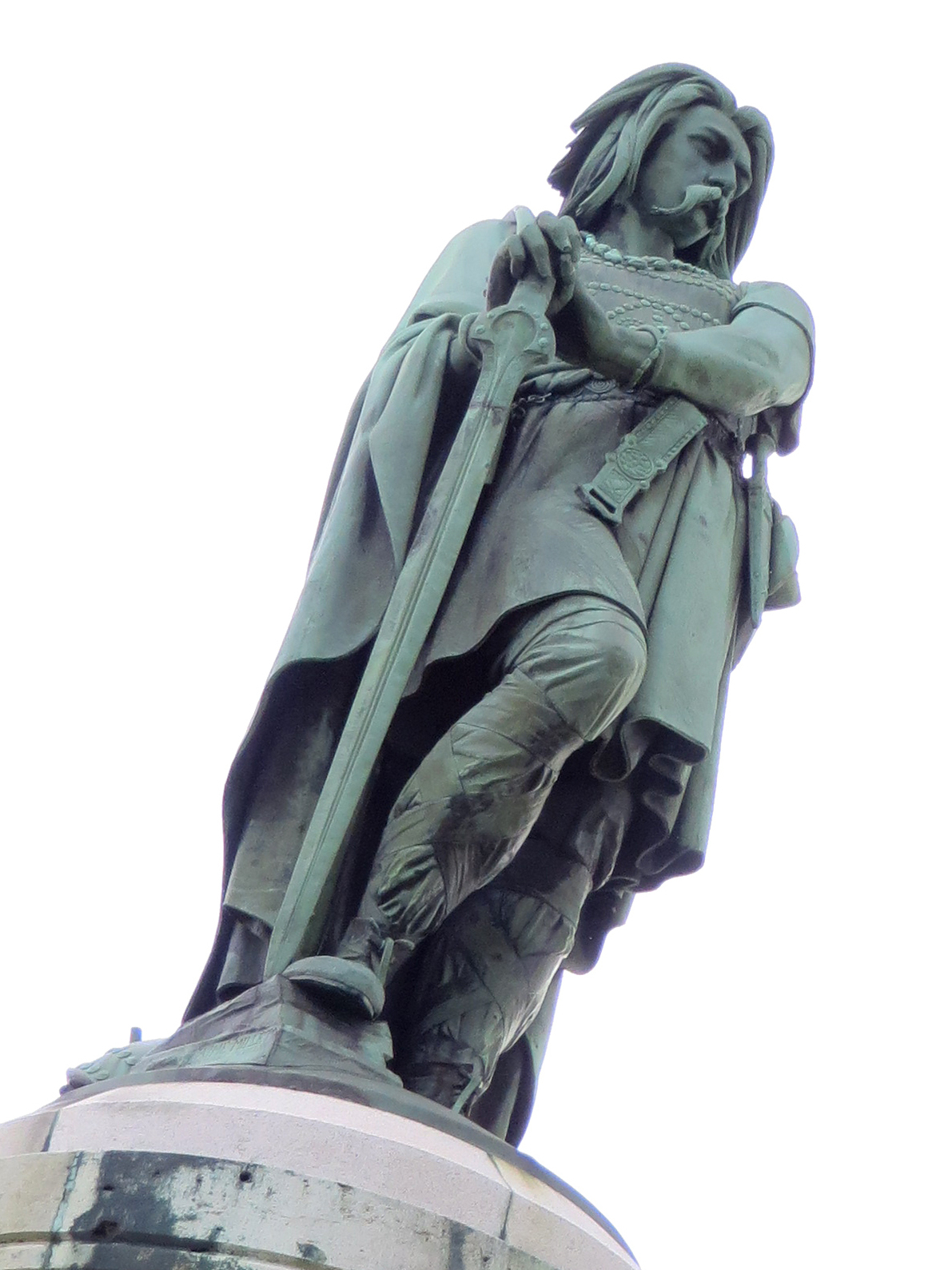 Vercingetorix, leader of the Gauls, is a national hero in France, where he is admired for his fight against invading Romans, despite his ultimate defeat.

Every summer, a village in eastern France celebrates a Gallic chieftain who lost a major battle to Julius Caesar in 52 B.C. Despite that defeat, the mythic Vercingetorix, leader of the Gauls, is a French national hero today.

But Vercingetorix wasn't always remembered with such fanfare: For 2,000 years, he lay nearly forgotten.

On a recent day, actors posing as Gauls and Roman legionnaires engage in a mock battle at Alesia MuseoParc, a newly opened museum in Burgundy, where the real battle of Alesia, also known as the Battle for Gaul, is believed to have taken place.

In the verdant countryside not far from the museum, a giant statue of the sandal-footed Vercingetorix rises from a hilltop, with his sword by his side, long hair and mustache flowing. Olivia Surge says even though Vercingetorix lost to Caesar, it was a noble defeat.

"We might have lost, but we held on," the museum visitor says. "And Vercingetorix was the first leader in France to speak of liberty. And that's our motto today: liberty, equality, fraternity."

A Proxy For Napoleon III

Surge has brought her children to watch the jousting. Every French schoolchild learns about "our ancestors the Gauls." Although vanquished and Romanized, the Gauls are seen as the moral victors in the collective memory of France, and are now a national symbol. There are the iconic Gauloise cigarettes, and millions of readers around the world know the beloved comic book characters Asterix and Obelix, whose Gallic village is the last to resist Roman invaders thanks to a druid's magic potion that grants super strength. 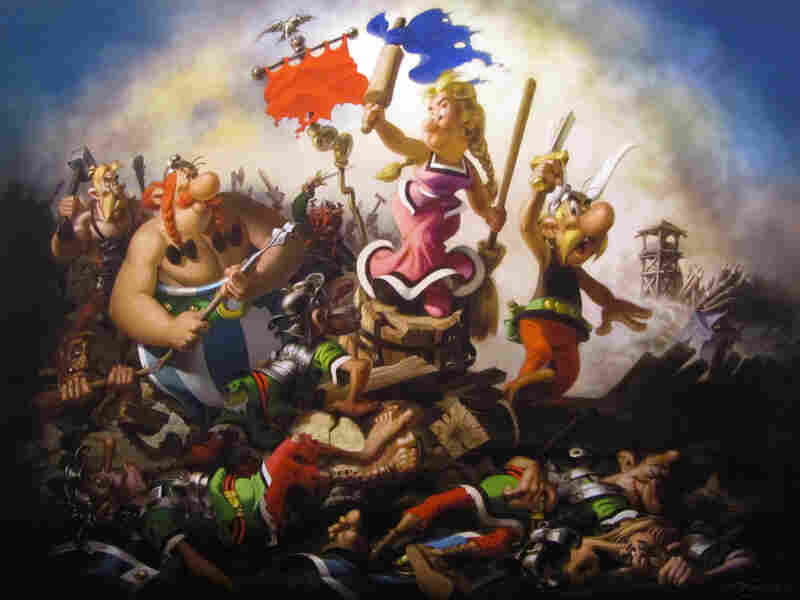 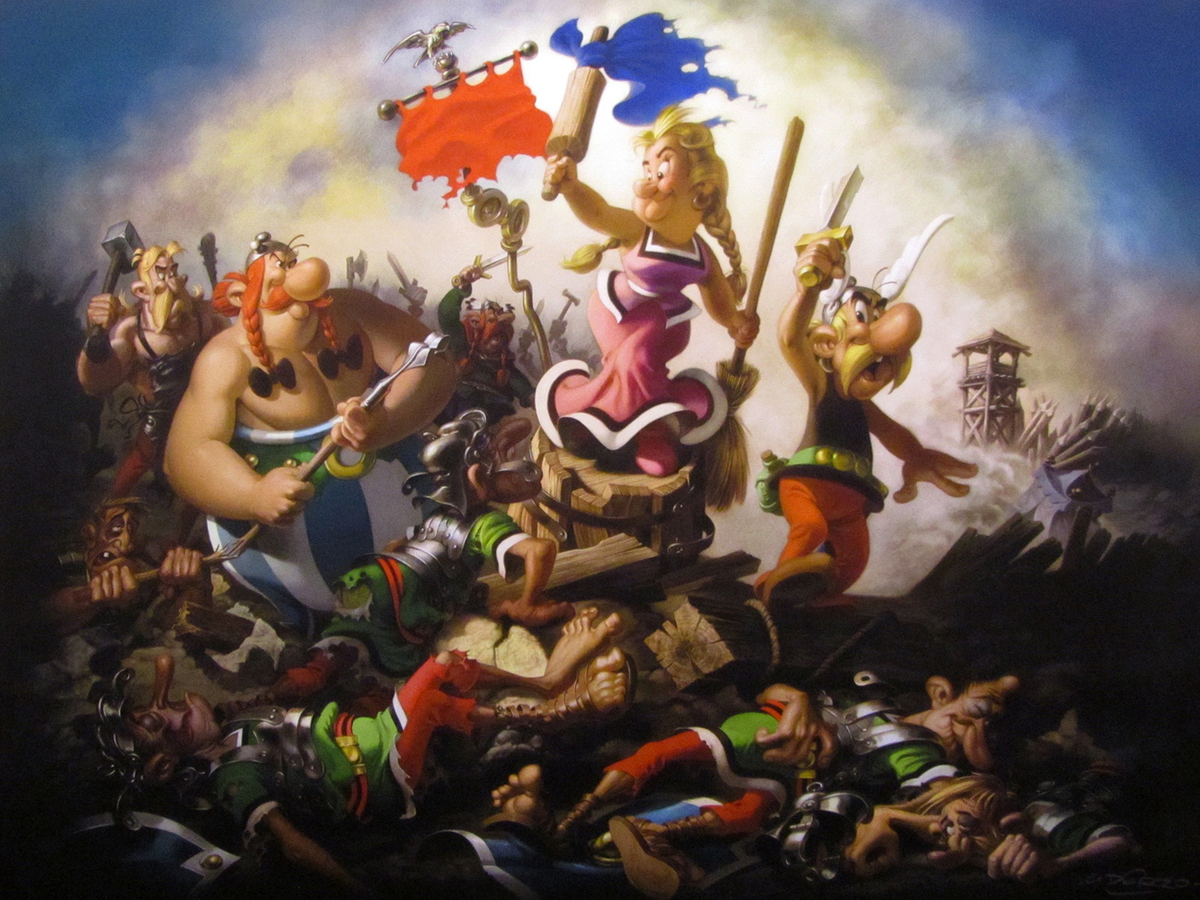 Vercingetorix's struggle is immortalized in the tales of beloved comic book characters Asterix and Obelix.

But for nearly 2,000 years, Vercingetorix and the Gauls were mostly forgotten in France. It was Emperor Napoleon III in the 19th century who commissioned the first archaeological digs near the battle site, built the statue and resurrected the myth of Vercingetorix. Museum curator Karine Marchadour says Napoleon III needed Vercingetorix.

"Napoleon III used Vercingetorix to get across a powerful political message, which was: get behind me, and we will fight together against the invader," she says. "At that time, the invader was Prussia."

Historians say the statue of Vercingetorix even has the face of Napoleon III under all that unruly Gallic hair. It didn't do him much good: In 1871 he lost the Franco-Prussian war to Otto Von Bismarck.

Standing Up For The Gauls

The village of Alise-Sainte-Reine sits on a hilltop believed to be the former Gallic stronghold of Alesia, and each summer, it holds a festival celebrating Vercingetorix. Just as there is in the comic book Asterix and Obelix, there is music, drink and wild boar roasting on a spit. 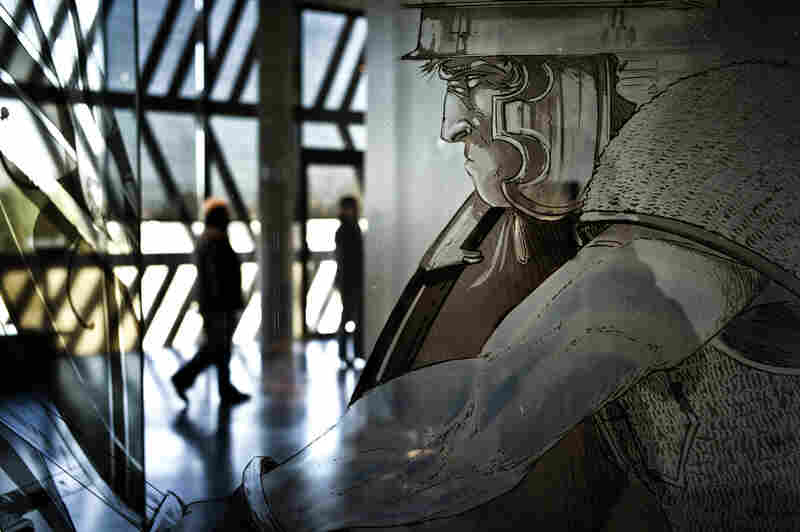 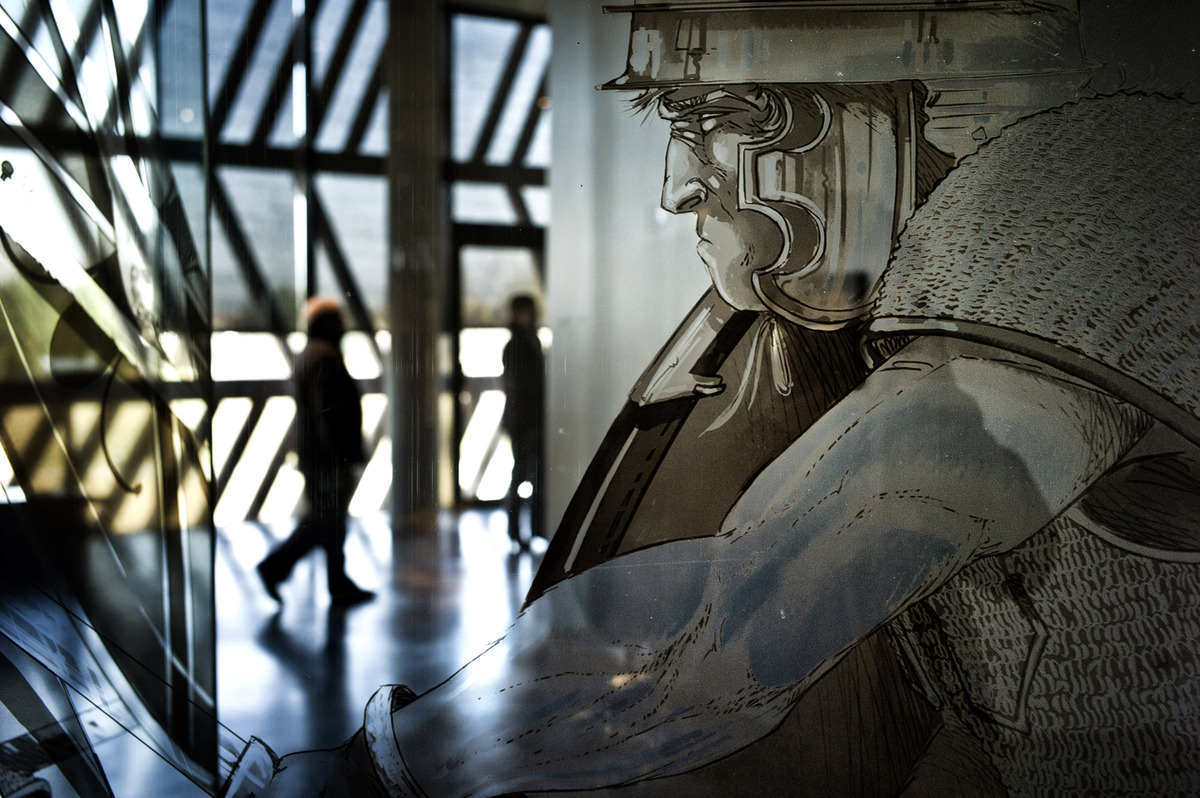 People visit the Alesia MuseoParc dedicated to the Battle of Alesia, on March 14, 2012, in Alise-Sainte-Reine, France.

Jasmine Moussereau, 11, says she and her friends look forward to the annual festival, and Vercingetorix is their hero.

She says he showed that France knows how to fight, adding that he knew how to lead troops and that he motivates her and her peers to do well in school.

After the battle in 52 B.C., each Roman soldier was given a Gaul as a slave. Vercingetorix was captured and exhibited during Caesar's triumphal procession back in Rome before being executed.

But no one actually considers the Gauls' defeat such a bad thing. The Romans did bring roads and bridges and ushered in three centuries of peace. For 65-year-old Noel Monard, Vercingetorix was simply the first French resistance fighter. 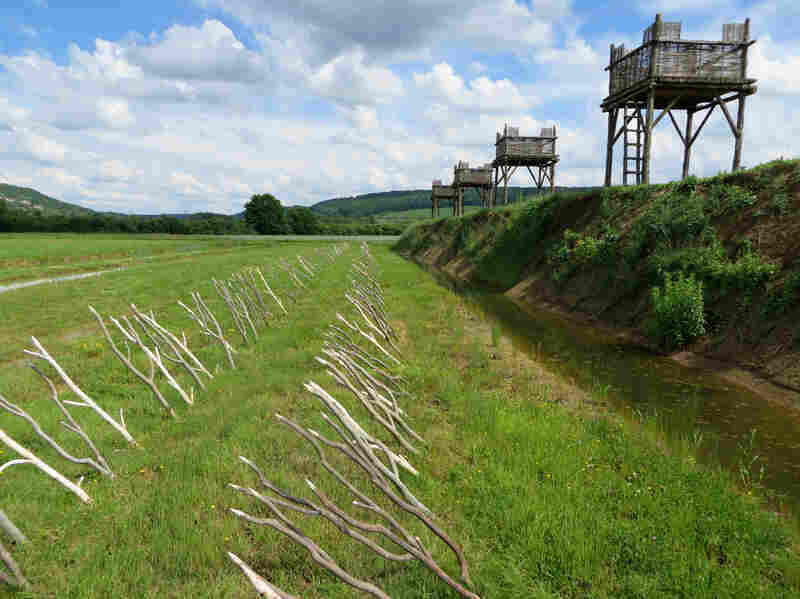 Attractions at the Alesia museum include a re-created Roman fort from the time of Caesar's victory over Vercingetorix. Kevin Beesley/NPR hide caption 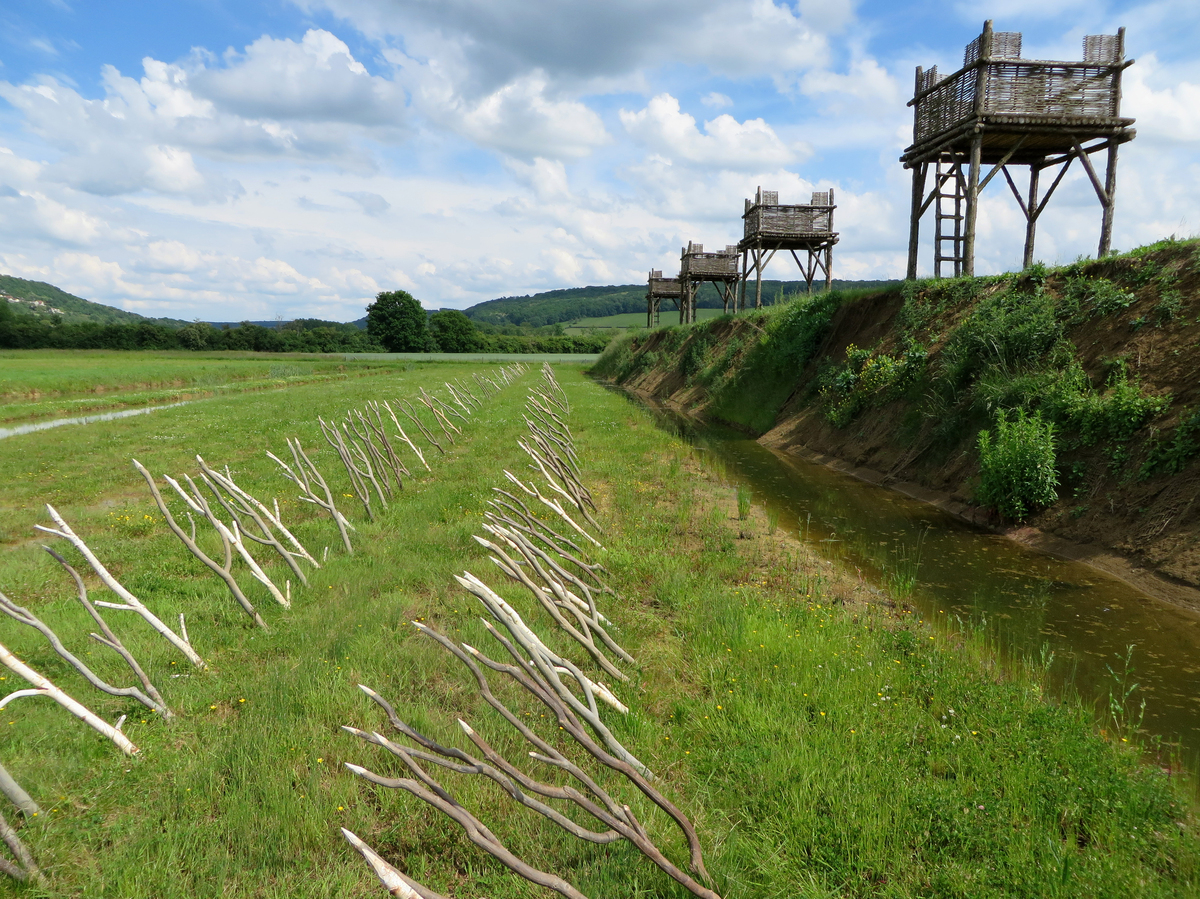 Attractions at the Alesia museum include a re-created Roman fort from the time of Caesar's victory over Vercingetorix.

"Vercingetorix stood up to the Romans and we can never forget that. We are all Gaulois and we're proud of it," he says, laughing.

There has been some argument over the years as to whether the final battle for Gaul actually took place in Alesia, or in a spot further southeast. Though archaeologists have unearthed Gallic and Roman weapons and even pieces of Roman fortifications and tents, the site doesn't completely match Julius Caesar's description.

But in Alise-Sainte-Reine, there is no doubt that Vercingetorix is all theirs.