Accessibility links
Government Shutdown? Odds Are Uncomfortably High For all the fiscal cliffhangers and debt-ceiling brinksmanship over the past couple of years, Congress has been able to find some kind of solution at the last minute. This time, many budget analysts worry, might be different. 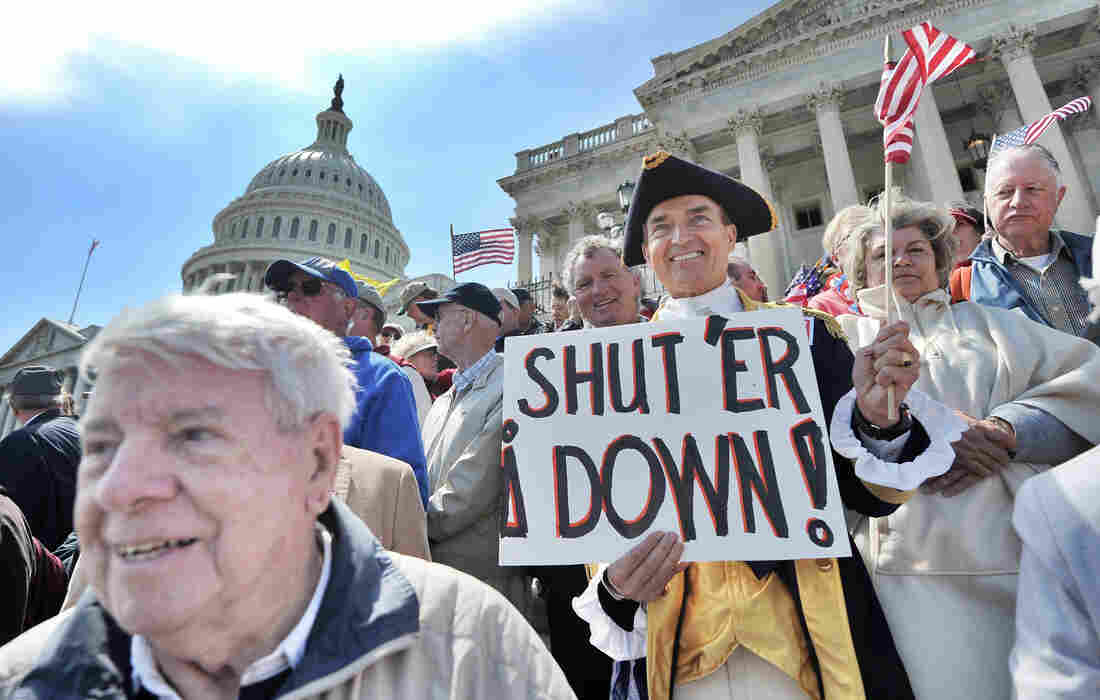 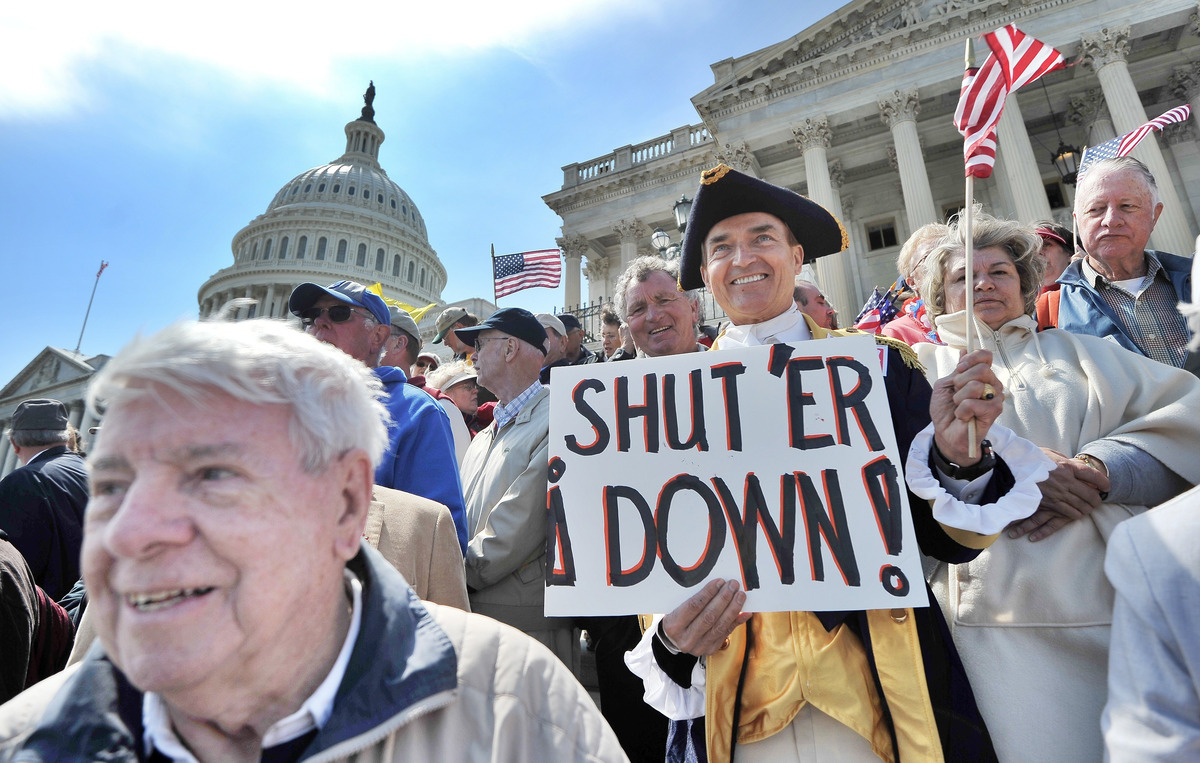 Protesters urging a government shutdown and spending cuts demonstrate in front of the U.S. Capitol in 2011.

It's going to be another ugly fall in Washington.

The federal government runs out of money on Oct. 1, unless spending authority is granted to agencies for the new fiscal year. If Congress can't pass its spending bills by then, most of the government will shut down.

It's no empty threat. Many who watch the budget process closely think there's a very good chance that's exactly what's going to happen.

"I'm afraid it's more likely than not," says Scott Lilly, a former Democratic staff director on the House Appropriations Committee. "How much time has to pass before Congress finds out that people are really angry?"

Action in both the Senate and House prior to the current congressional recess suggests that any sort of a deal is a long way away. And the two chambers will be in session together a total of only nine days before the deadline.

The House and Senate are currently about $90 billion apart in terms of total spending. As if that wasn't challenging enough, Congress will also have to grapple with the politically charged issue of raising the nation's debt ceiling sometime in the fall.

House Speaker John Boehner has said he'll insist on spending cuts equal to any increase in the debt limit. Regardless of whether he holds to that, it's going to be a challenge to find enough votes in the House GOP majority to vote for any sort of a budget package that the Democratic-controlled Senate will also approve — and that President Obama will sign.

Compounding the difficulty is the fact that a number of congressional Republicans say they want to block any new spending unless Obama's health law, the Affordable Care Act, is defunded. Many also want cuts triggered by the sequester law shifted from defense to domestic programs — something Democrats are not keen to endorse.

For all the fiscal cliffhangers and debt-level brinksmanship over the past couple of years, Congress has been able to find some kind of solution at the last minute. But it's hard to imagine at this point what a deal will look like. That's why some observers worry that the government, or large parts of it, could in fact be shut down for the first time since the winter of 1995-96.

NPR talked to various budget experts to get their sense of how things might play out. Their comments have been edited for length:

"It's a hostage you can't shoot. Enough people appreciate that both the substance and the politics of it don't work, if you're a Republican.

"The leadership of the Republican Party, both in the Senate and the House, know if there's a shutdown, they would suffer. The blame would fall on them.

"They could end up so wrapping themselves around the wheel that you could have a shutdown for two or three days, or a week. But I think the [total budget] number ends up at the sequester number, until they can replace the sequester number with possible changes on entitlements."

"I'd say this is probably the worst appropriations impasse I've seen in 30 years.

"You've got the enormous differences in the total the two sides are willing to accept. Then there's the desire on the House Republican side to shift the sequester [cuts] from defense to nondefense, which would trigger a veto. Then there's the defunding of Obamacare.

"All of that adds up to the very real possibility of the first shutdown since 1995. I say that clearly is something that none of the leaders want.

"At the end of the day, I think there will be something like a full-year CR [continuing resolution, which maintains spending mostly at current amounts], somewhere between the House level and Senate level, with the sequester still in effect."

"The shutdown itself will change the politics of it, as constituents yell about not being able to get into national parks. As the impact of [cut] government services starts to be felt, that probably will allow a deal, even a small deal for a short period of time, to happen."

"Being a budget analyst is kind of like being the main character in the movie Groundhog Day. It seems like we have these possibilities and threats every year now.

"Could there be a shutdown for a couple of days? Yeah. Long-term, no.

"The two sides are like peacocks, lots of pageantry and show that they have to put on for their base. But at the end of the day, neither side really wants it to happen. Defunding Obamacare, from where I sit, that would be wonderful, but the reality is that the president is not going to sign a bill that defunds his signature policy.

"The question to me is, what number do they ultimately arrive at? It's probably going to be somewhere in the middle."

"The government shutdown is far easier to get a grasp on than the endgame. They do always tend to procrastinate, but usually you sort of have a bid and an ask, or a floor and a ceiling, so you know the broad parameters of the deal. Now, you really don't have any type of compass as to what are the ingredients in this sausage.

"Part of the reason it's so confusing is Republicans are all over the map in terms of what they want. At the end of the day, Republicans have a big arithmetic problem.

"You can imagine they'll do a one- or two-month punt CR, but at that point, I don't think anyone has a good idea how the debt ceiling is handled.

"There's been eight months of relatively smooth sailing on the fiscal front. People have maybe lulled themselves into thinking there aren't still massive disagreements between the House and Senate and White House, and within the parties as well. None of this was ever resolved."

"I think the likelihood of a government shutdown is near zero. While a showdown in the debt limit and government funding is set for this fall, neither side wants a shutdown. Numerous Republicans have expressed their view that a shutdown is bad politics as well as bad policy. I wonder if Democrats feel likewise or perhaps they are hoping for Republicans to misstep.