Accessibility links
Swinging CO2 Levels Show The Earth Is 'Breathing' More Deeply Carbon dioxide levels in the atmosphere cycle up and down as plants take it up in the summer and let some of it out in the winter. Over the past 50 years, these "breaths" have gotten larger, as plants in the Arctic are taking up more carbon dioxide during the warmer summers. 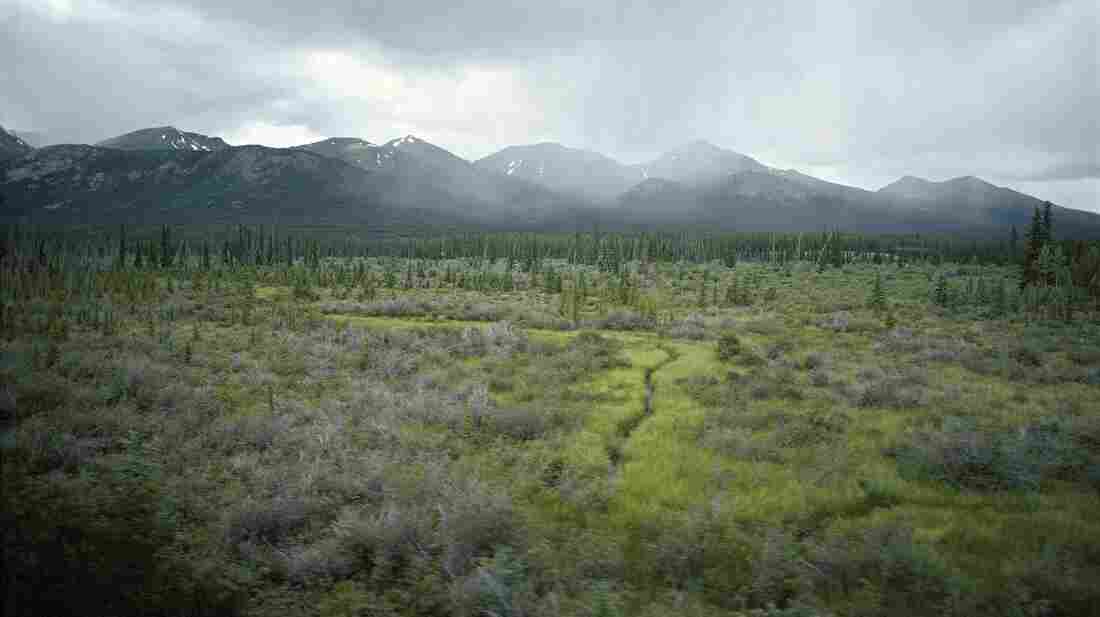 Plants accumulate carbon in the spring and summer, and they release it back into the atmosphere in the fall in winter. And a change in the landscape of the Arctic tundra, seen here, means that shrubs hold onto snow better, which keeps the organic-rich soils warmer and more likely to release carbon dioxide that's stored there. Jean-Erick Pasquier/Gamma-Rapho via Getty Images hide caption

Plant life on our planet soaks up a fair amount of the carbon dioxide that pours out of our tailpipes and smokestacks. Plants take it up during the summer and return some of it to the air in the winter. And a new study shows that those "breaths" have gotten deeper over the past 50 years.

This isn't just a curiosity. Plant life is helping to reduce the speed at which carbon dioxide is building up in our atmosphere. That's slowing the global warming, at least marginally, so scientists are eager to understand how this process works. The new study provides some clues.

If you look at the graph of carbon dioxide concentrations in the atmosphere, you'll notice that it has climbed sharply over the past five decades, from about 315 parts per million to 400 parts per million. But that's not the whole story.

This chart shows the levels of atmospheric carbon dioxide as measured from Point Barrow, Alaska, from 1974 to 2007. Not only has the general trend ticked upward, but the size of the seasonal swings (the "saw tooth" pattern) has increased year to year. Carbon Dioxide Information Analysis Center hide caption

This chart shows the levels of atmospheric carbon dioxide as measured from Point Barrow, Alaska, from 1974 to 2007. Not only has the general trend ticked upward, but the size of the seasonal swings (the "saw tooth" pattern) has increased year to year.

"In addition to this steady increase caused by fossil fuel combustion and other human activities, there's a regular seasonal cycle of CO2 concentration," says Heather Graven, a postdoctoral researcher at the Scripps Institution of Oceanography.

The graph actually looks like the edge of a saw. The annual zigzag follows the seasons. There's more carbon dioxide in the winter and a bit less in the summer. That's the collective breathing of all the plants in the Northern Hemisphere.

"Plants are accumulating carbon in the spring and summer when they're active, and they're releasing carbon back to the air in the fall and winter," Graven explains.

And that up-and-down pattern contains important clues about the plants that grab that carbon dioxide and use it to grow.

Scientists at Scripps and elsewhere are publishing a new study that looks at that global breathing pattern in detail. The new data include air samples taken from an airplane that flew repeatedly over the Pacific Ocean, from one pole to the other, to look for small differences in carbon dioxide.

The group reports in Science magazine that the teeth in that saw-tooth pattern have grown bigger over the past 50 years.

"The vegetation is taking deeper breaths, if you will," Graven says.

In particular, that is happening in the far northern parts of the planet, mostly the boreal forest and the Arctic tundra. And Graven says you can actually see changes in the vegetation from space and in aerial photographs.

"The area covered by forest in these northern latitudes has grown over the past few decades, so there's more forests," she says. "We've also seen that some species and ecosystems have been migrating pole-ward," she says.

Some of the biggest changes are in the open fields of the Arctic, the tundra.

"The really big visual difference is the amount of shrubs, which is increasing greatly," says Steven Oberbauer, a plant physiologist at Florida International University. He has witnessed these big changes firsthand at his research sites in northern Alaska. But Oberbauer says the story isn't quite so simple.

This Climate Fix Might Be Decades Ahead Of Its Time

True, plants are taking up carbon dioxide. But this plant growth is also changing the ecosystems. For example, Arctic shrubs hold onto snow that would otherwise blow away, "and that snow makes an insulation blanket, basically, over the soil, which allows the soil to be warmer in the winter."

Warmer soil is likely to release carbon dioxide that's stored there, and that could be very worrisome.

"The kicker for the Arctic is there's a huge amount of carbon stored in the peat there, in the organic soils, and if that were to be released into the atmosphere, it would increase the atmospheric CO2 concentrations enormously," Oberbauer says. And this would have repercussions far beyond the Arctic. Climate change means more sea-level rise back at Oberbauer's home in Florida.

Oberbauer was not involved in the study that's being published in Science, but he says it should help the many scientists who have been trying to figure out the fate of all that carbon dioxide. There are other lines of evidence that suggest what's happening in the Arctic is not the whole story.