Accessibility links
In Paducah, Artists Create Something From Nothing The Lowertown neighborhood of Paducah, Ky., once riddled with crime and dilapidated homes, is now a haven for artists and a thriving community life. Artists and non-artists alike have been moving to the neighborhood since 2000, when the city decided to create the Artist Relocation Program. 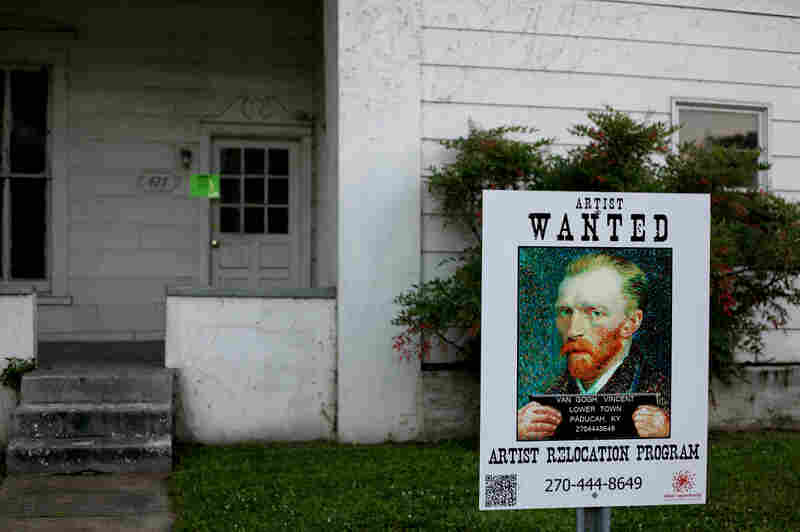 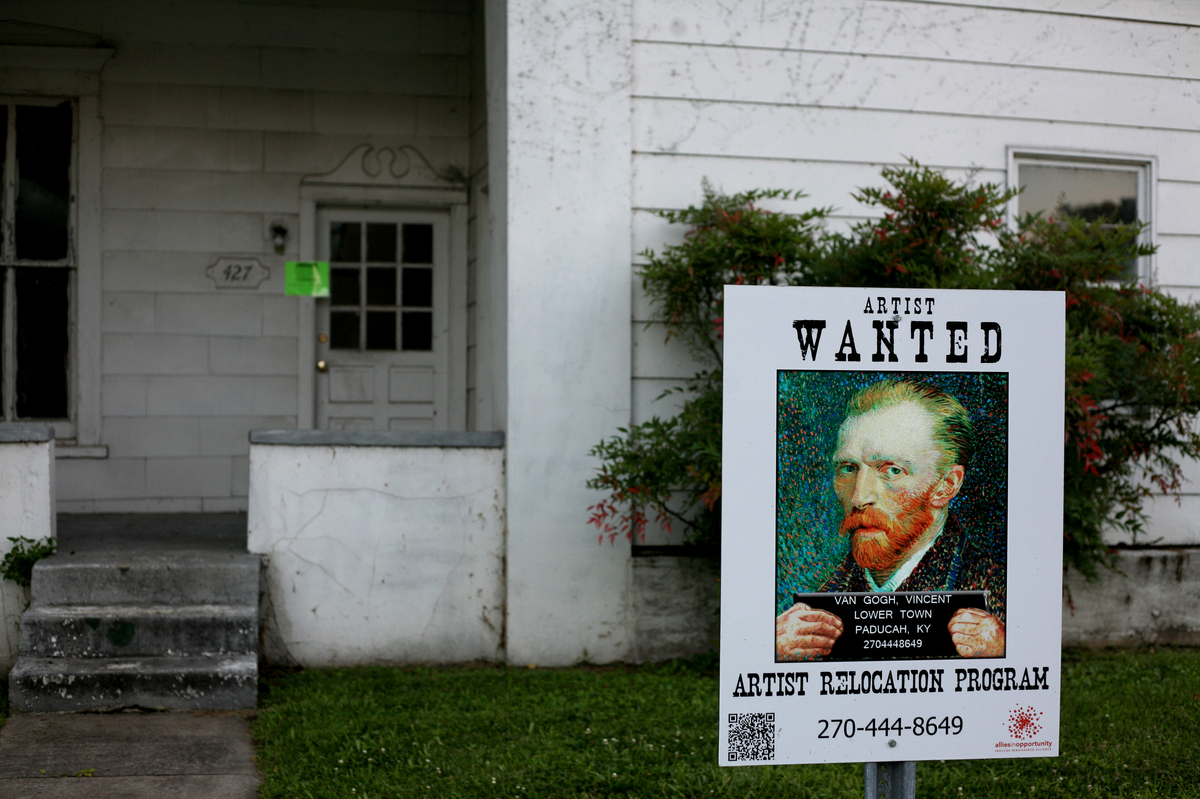 How do you fix a neighborhood? What do you do about crime and drugs and the once-lovely old houses that are falling down? The answer in Paducah, Ky., was to turn it into a special place for artists to live, work and sell.

Paducah, already home to the National Quilt Museum, is far west on the edge of Kentucky, on the Ohio River. Lowertown, so-named for being downriver from downtown Paducah, was once quite elegant — 25 square blocks. But in time it became a difficult place to admire.

Bill and Patience Renzulli came to Paducah from Maryland for the first time in 2001 after seeing an ad in an art magazine for the neighborhood's Artist Relocation Program. At first glance, Bill says the scene of the neighborhood was awful.

"But I don't know... I felt something," he says. "There was a spark and I thought that something good could happen."

On their visit, The Renzullis were dismayed by condemned buildings, grand Victorian homes chopped up into apartments, drug use, crack sales and prostitution. But in 2000, the city decided this would become the Lowertown Arts District. The message: "We'll sell you an empty lot for a dollar. If there's a house worth fixing — try that — same price." The Paducah Bank agreed to help.

"Within a year there were about eight people that signed up and the next year it was 16 and it just, it grew geometrically," Bill Renzulli says. "It was unbelievable."

Bill Renzulli, once a doctor, is now a printmaker, with a studio and gallery in back of his house. When Paducah started this movement the town was aggressive. Extra policing. Houses demolished. Foreclosures almost immediate. Vacancies became opportunities, and so the new people came.

The idea for the Arts District was simple: You can live here, you can work here and you can sell your art here.

Freda Fairchild used to teach costume design in San Diego. When she moved to Lowertown, she's converted a former plumbing shop and became a print maker and fiber artist. Her studio epitomizes the sexiest word for artists everywhere: space. 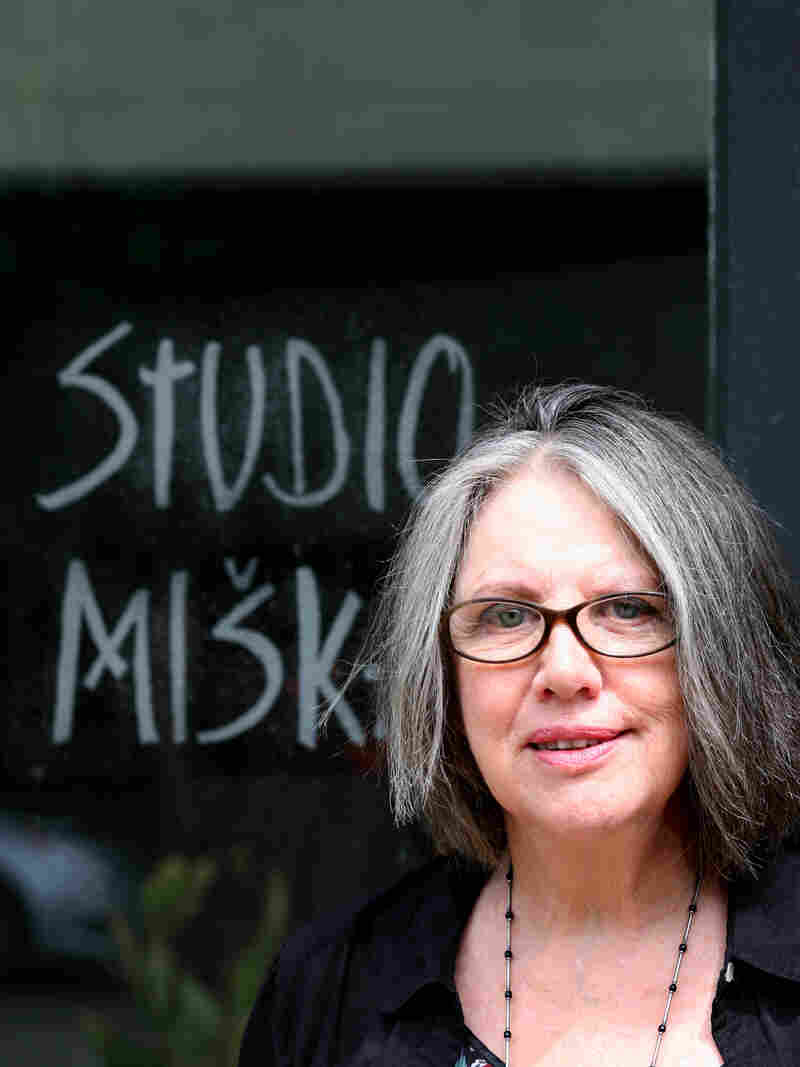 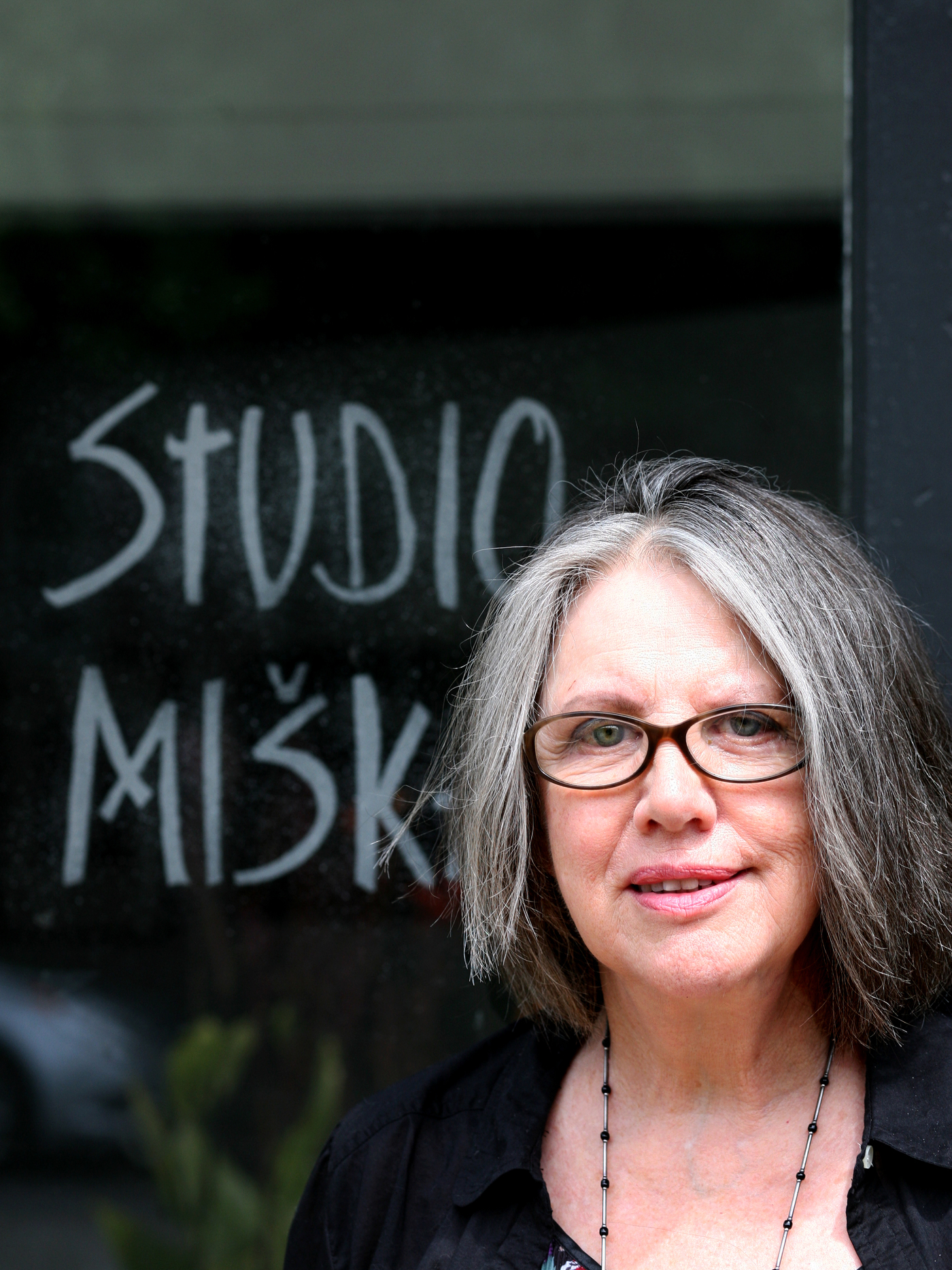 "Most people who come here from other states, other places and they walk into my studio they start drooling. It's 28-by-34 feet," she says. "The tables are on wheels. It's a wonderful studio space."

Many of the Lowertown artists sell their work out of town. Freda Fairchild deals with several galleries, even some in other countries.

"If I make something, eventually somebody buys it," she says. "I think that's a cool way to live. I love it. I just do what I want to do. But surprisingly, since I moved here I've sold a lot of work locally."

Artist Paul Lorenz had been looking for a challenge. He drove into Paducah not knowing anything about the city, and happened upon a movie theater that was playing the Mexican film, Y Tu Mamá También, which is one of Lorenz's favorite films.

"And I'm in this little town in Kentucky and they're showing an X-rated Mexican film," he says. "You know, it's like 'I could live here, this is kind of interesting.' "

Now, Lorenz sells his oil paintings and drawings from Lowertown. Originally from Chicago, Lorenz then moved to Berkeley, Calif. where he owned what he calls a tiny condo. He sold the condo for enough money to move to Paducah and built a studio, gallery and his house next door. He even built a guest studio out back.

That sort of equity is often what makes a move to Lowertown work out.

But Shand Stamper and her husband Mitch came with only a trailer full of stuff. Both now teach high school art. They have a new baby. They've bought and redone a small house. The city gave them the adjacent lot for a studio and wood-fired kiln.

"I feel very safe here," Shand Stamper says "I feel helpful. I feel like I have something to offer. And we have a Lowertown Neighborhood Association, which is primarily artists, and it feels like an extended family."

The new Lowertown does seem friendly and is said to be safe. Kids play outside, dogs run around happily, retired couples relax on porches. Six years ago, Allan and Johanna Rhodes drove from a different neighborhood to Lowertown to take a walk. Afterwards, Johanna wanted to move to Lowertown.

"And I said, 'What is it we're going to do in Lowertown?' Since we're not artists, we thought you had to be an artist," Allan Rhodes says, "And we walked a little bit and she said 'Well, we'll have a coffee shop, 'cause we like to drink coffee and we'll have a student art gallery, a place for students to hang art.' And I said, 'Well, at sounds like a great idea,' thinking this will never happen."

They now live upstairs over their coffee shop.

Steve Doolittle, a Paducah city planner, is pleased that new money is coming to Lowertown. Much of it not related to the arts.

"It is now a neighborhood where local people are happy to invest," he says. "We've seen some of the most expensive housing in Paducah has now been built in this neighborhood. That would not have happened but for the Artists Relocation."

Paducah spent nine million dollars over 13 years to clean up Lowertown, Doolittle says on things like new lighting, sidewalks and keeping the empty lots mowed. But he pointed out the private regular people investment in Lowertown now exceeds $40 million.