Accessibility links
A 'Curb'-Like Comedy And The Return Of 'Breaking Bad' This weekend, AMC begins showing the final episodes of its acclaimed drama series, and launches a new one: Low Winter Sun. Meanwhile, HBO presents its newest made-for-TV movie — this one a comedy, starring and co-written by Larry David. 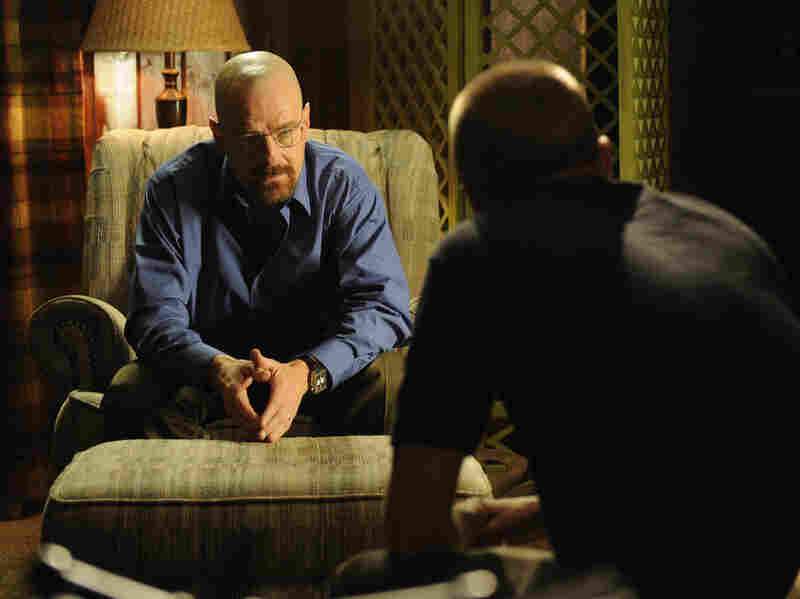 Before the midseason break, Breaking Bad's Walter White (Bryan Cranston) had stashed away plenty of drug money, but may have inadvertently tipped off his DEA agent brother-in-law. Ursula Coyote/AMC hide caption 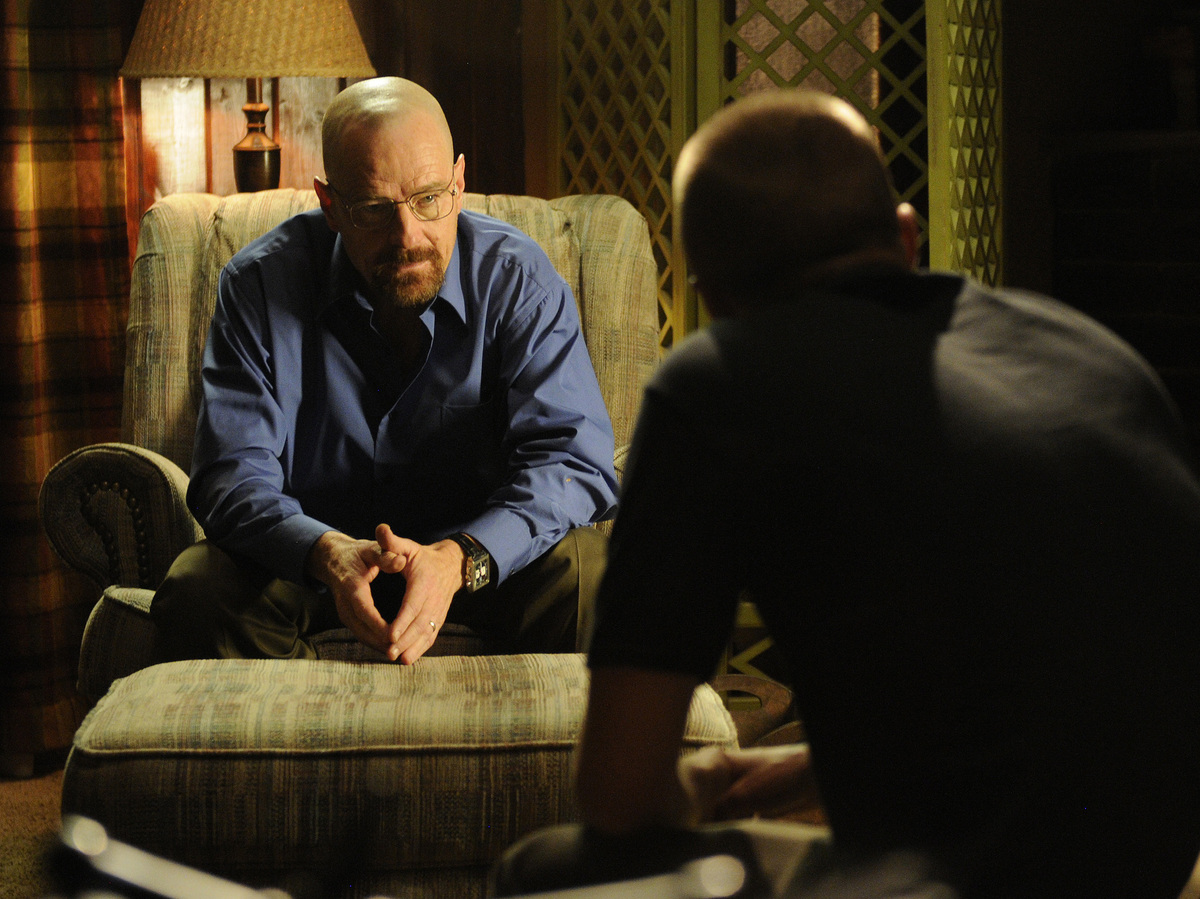 Before the midseason break, Breaking Bad's Walter White (Bryan Cranston) had stashed away plenty of drug money, but may have inadvertently tipped off his DEA agent brother-in-law.

This weekend, the AMC cable network begins showing the final episodes of its acclaimed drama series Breaking Bad, and launches a new one: Low Winter Sun. Meanwhile, HBO presents its newest made-for-TV movie — this one a comedy, starring and co-written by Larry David.

Breaking Bad, Vince Gilligan's series about a central character going from milquetoast mild to remorseless killer, returns this Sunday after an extended midseason break. And something fascinating happened during the interim: While the show itself was on hiatus, interest in it kept building. By now, anticipation for the final eight episodes of Breaking Bad has achieved the status of a true pop-culture phenomenon. Walter White, welcome to the TV zeitgeist.

Part of the reason is because Gilligan and company have crafted one of TV's most compelling storylines in years. Bryan Cranston has been nothing short of astounding as Walter White, a high-school science teacher who reacts to a diagnosis of terminal cancer by making crystal meth to provide a nest egg for his family. The rest of the cast, too, has been remarkably good at portraying the other characters' complicated emotional trajectories. As ensemble casts go, Breaking Bad is as good as Mad Men and Justified, which means it's as good as TV gets.

But great storytelling and terrific acting aren't the only reasons Breaking Bad has suddenly grabbed so much attention. My theory is that it's because of DVD releases and streaming services, and the chances for audiences to catch up on prior episodes before the new ones begin Sunday. The new availability of old television makes it possible, even easy, for latecomers to join the party — while, on the other hand, AMC's massively publicized rollout of the final eight episodes ensures that there will be a party. For the old existing episodes, there's binge-viewing. For the new ones, there's a once-a-week treat, and the increasingly rare sensation of water-cooler conversation, where people are sharing the same TV experience at the same time. If you sit on the last episodes of Breaking Bad to watch them later, Spoiler Alert: The main thing you'll be spoiling is your own enjoyment. 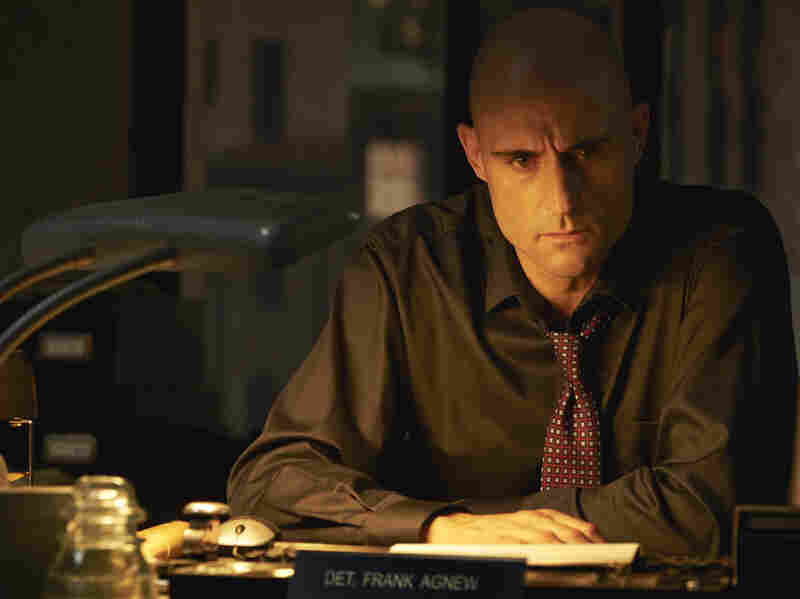 AMC's Low Winter Sun is based on an award-winning British miniseries of the same name, and which also starred Mark Strong. Frank Ockenfels/AMC hide caption 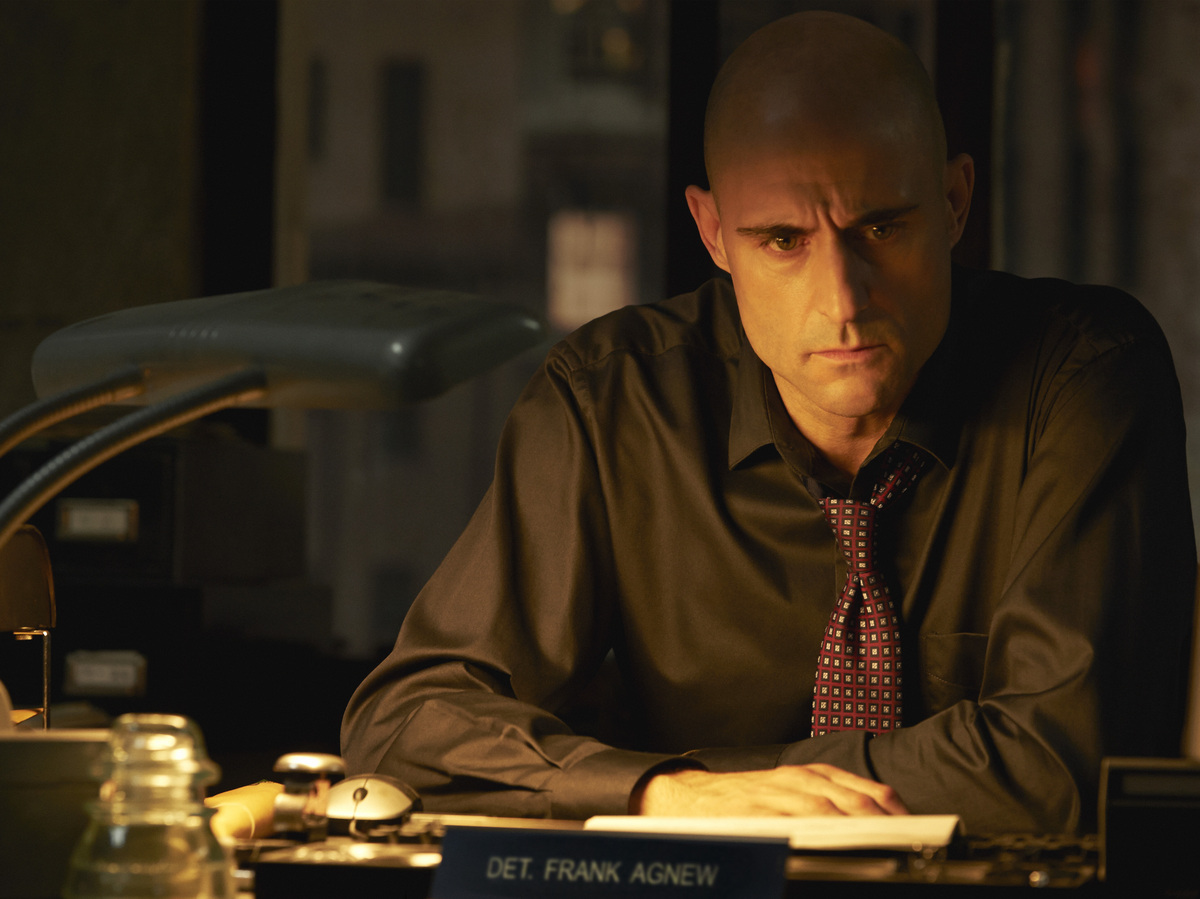 AMC's Low Winter Sun is based on an award-winning British miniseries of the same name, and which also starred Mark Strong.

In that spirit, all I'll say about the first episode in this final eight — the only one AMC provided for critics — is that it not only met my high expectations but surpassed them. If Breaking Bad maintains that high quality to its self-imposed finish line, it'll rank as one of the best series finales, and one of the best series, period, in TV history.

Following the return of Breaking Bad this Sunday is a new series, called Low Winter Sun. It's an Americanized version of a British series of the same name, transplanted to Detroit but featuring the same star: Mark Strong. He plays a cop who, in the opening scenes, does what Vic Mackey did so memorably in the first hour of The Shield: kills a fellow officer in cold blood.

In Low Winter Sun, the drama has to do with both why he did it, and whether he can get away with it. Strong is an intense actor, and so is Lennie James, formerly of The Walking Dead, who plays another cop with a secret or two. But this series, adapted by executive producer Chris Mundy of Criminal Minds and Cold Case, starts out feeling as unexceptional, and as forced, as those CBS crime series. Having Low Winter Sun occupy the time slot after Breaking Bad is a wasted opportunity — and it certainly won't be helped by any direct comparison.

Saturday night on HBO, though, Larry David serves up a winner. While we're all waiting for him to decide whether to produce another season of Curb Your Enthusiasm, he and his writing partners have teamed up with director Greg Mottola for a summer TV delight — a one-shot made-for-TV movie comedy. 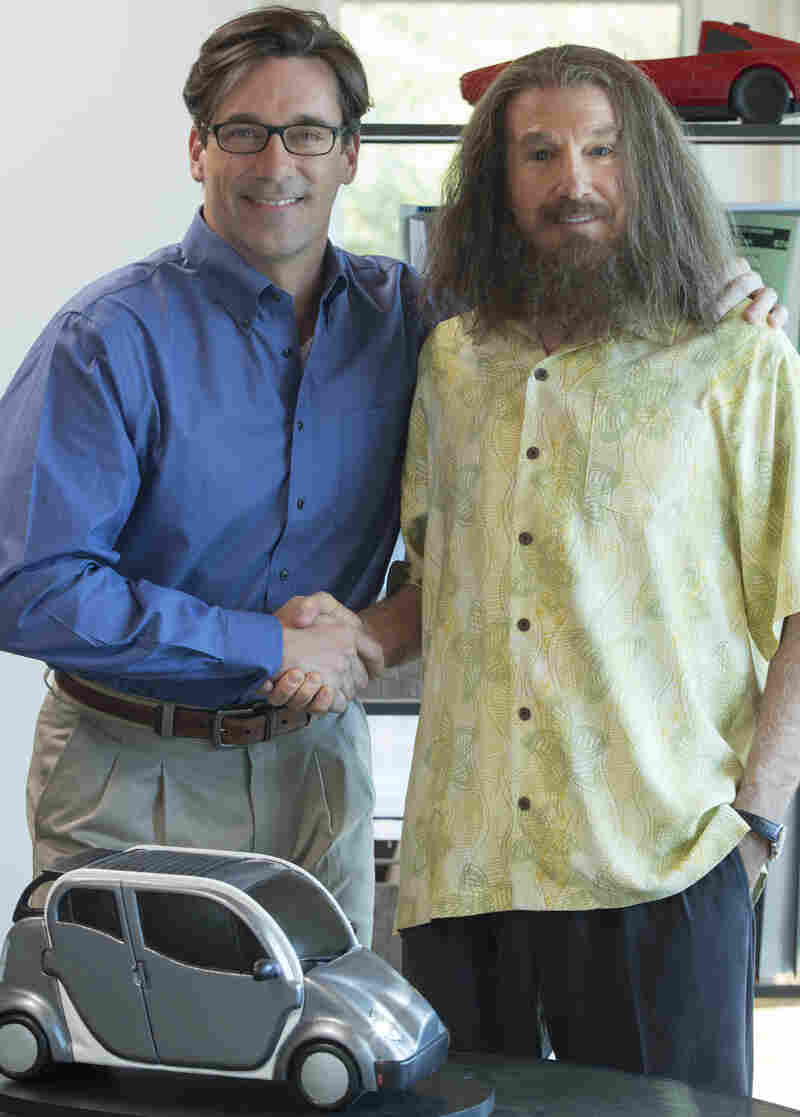 Jon Hamm stars alongside Larry David (under a lot of hair and makeup) in HBO's Clear History. It tells the story of a marketing executive (David) who fights with his boss (Hamm) and sells his share of the company — right before it makes it big. John P. Johnson/HBO hide caption 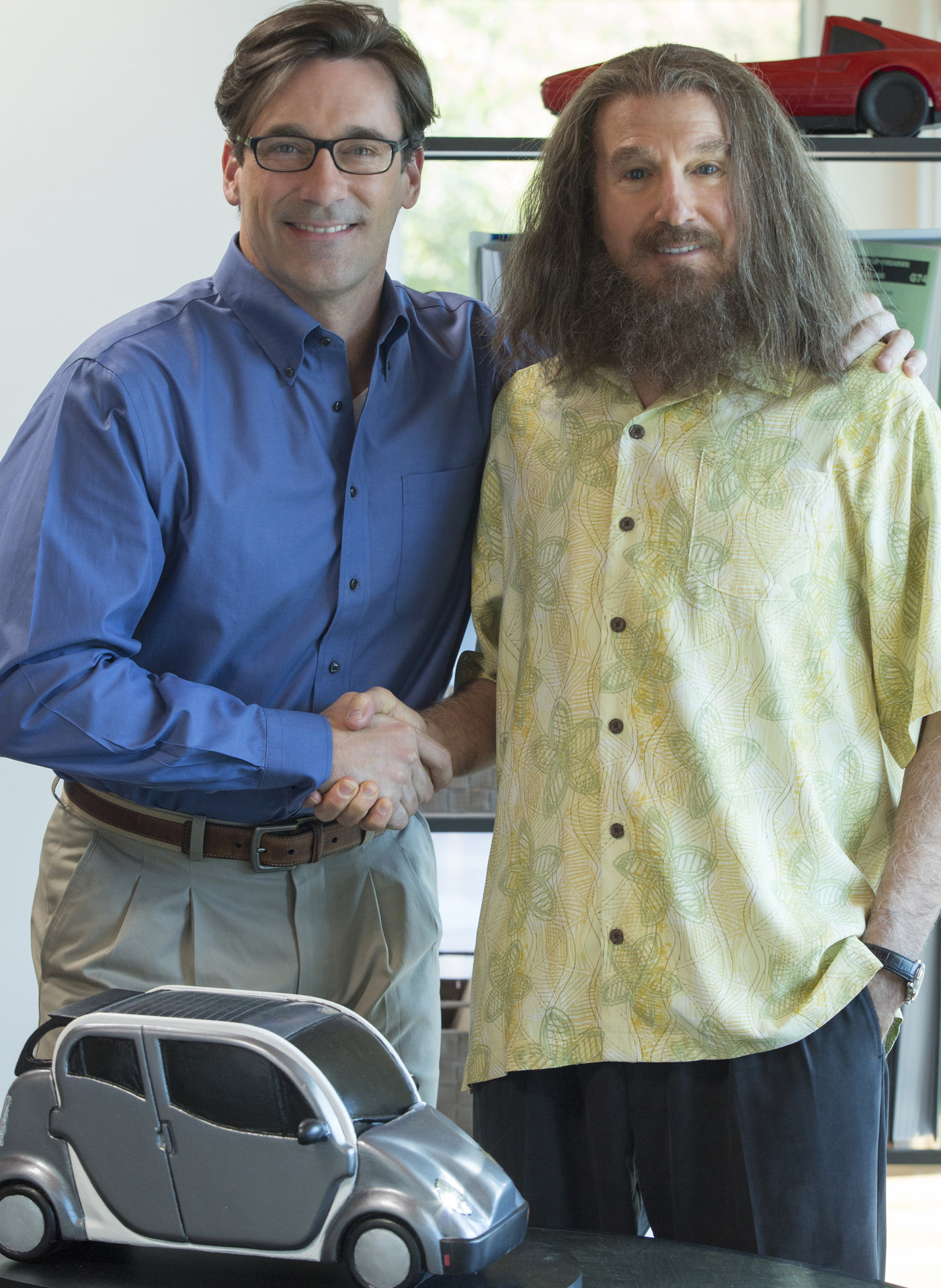 Jon Hamm stars alongside Larry David (under a lot of hair and makeup) in HBO's Clear History. It tells the story of a marketing executive (David) who fights with his boss (Hamm) and sells his share of the company — right before it makes it big.

It's called Clear History, and stars David himself as Nathan Flomm, the marketing director for a startup electric car company headed by Will Haney (Mad Men's Jon Hamm). The boss wants to name the new car "Howard," after the character Howard Roark in The Fountainhead — but Nathan objects, as only a character played by Larry David can.

Nathan owns 10 percent of the company, but after that argument he ends up selling it back. The Howard becomes a billion-dollar hit, and Nathan becomes the biggest laughingstock in business history since Decca Records' Dick Rowe rejected an unknown rock group named The Beatles. Cut to 10 years later, and Nathan is living on Martha's Vineyard under an assumed name, doing odd jobs and seething with resentment.

Like Curb Your Enthusiasm, the movie Clear History is both largely improvised and carefully plotted. What has to happen in each scene is outlined in advance, but how the actors get there is up to them. It's a wonderful way to work if you have the right actors, and David does. The cast of Clear History, in addition to Hamm and Curb regular J.B. Smoove, includes Michael Keaton, Bill Hader, Danny McBride, Kate Hudson and even an uncredited but very funny appearance by Liev Schreiber. The music of the rock band Chicago figures prominently in Clear History, as do Larry David's strangely sensible comic ideas — among them, in this case, the "eye-level electrical outlet." It's a sight gag that, by the end of the movie, had me laughing out loud — like so much of Clear History, especially when Smoove, Keaton or Hudson share the screen. Whether Larry David is writing movies or series for HBO, it turns out to be impossible for me to curb my enthusiasm.

The audio of this story, as did a previous Web version, incorrectly says music publisher Dick James declined to sign The Beatles. In fact, it was Decca Records' Dick Rowe who made that mistake.