Accessibility links
Pack A Pie For Your Picnic, Right In Your Hot Little Hand Serving an entire fruit pie in the park can be a little messy. So forget the plates and forks and bake up a few hand pies instead. Baker Kim Boyce sells these picnic-friendly turnovers, filled with summer plums, peaches and berries, every day in her Portland, Ore., bakery. 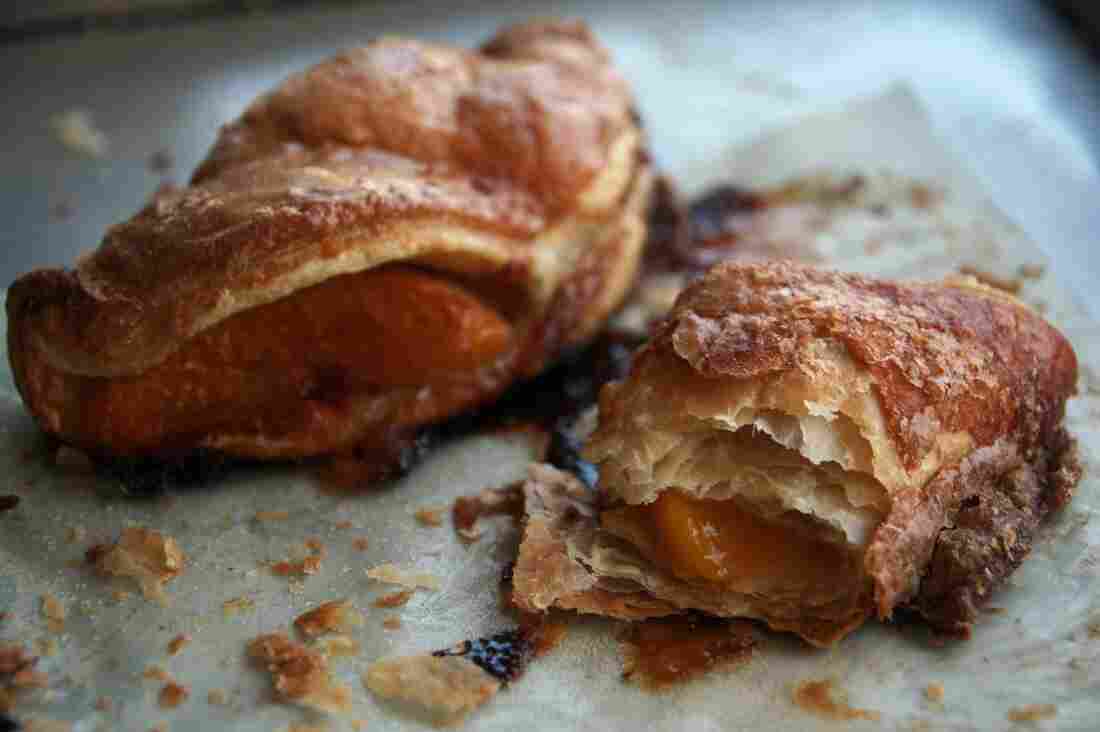 Baker Kim Boyce's hand pies can be filled with a variety of fruits, from apricots to blackberries. The fruit's natural sugars and juices caramelize while baking, concentrating the summer flavors. Deena Prichep for NPR hide caption 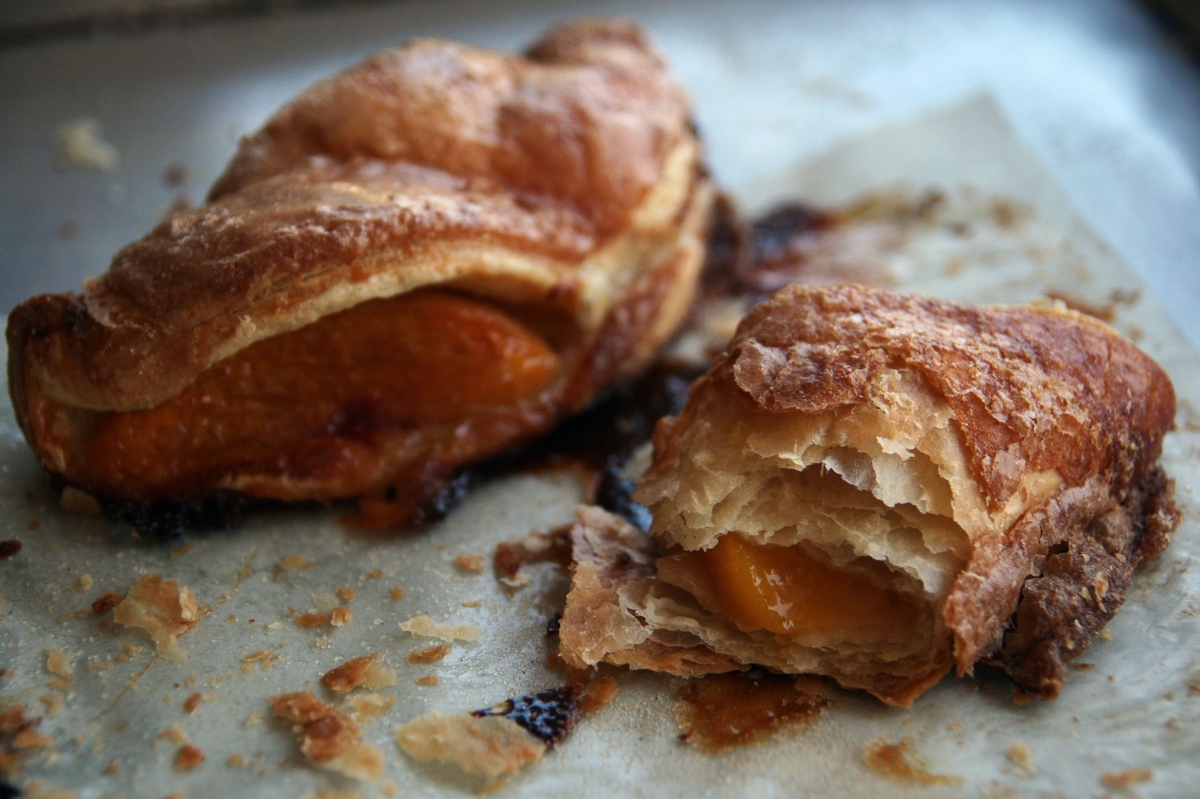 Baker Kim Boyce's hand pies can be filled with a variety of fruits, from apricots to blackberries. The fruit's natural sugars and juices caramelize while baking, concentrating the summer flavors.

Late summer is high season for delicious, juicy fruits, from Georgia peaches to Maine blueberries. Naturally, that gets many bakers thinking pie. But taking a big, drippy pie on a picnic can be a pretty sloppy prospect.

Kim Boyce, a baker in Portland, Ore., has solved this problem. For picnics, she bakes up hand pies: Sturdy little fruit-filled turnovers that don't require a knife and fork. Boyce makes 60 or 70 a day at her bakery.

"The fruit has this beautiful tartness, and ... 'jam-iness' from its natural sugars and juices coming together and caramelizing in the oven," Boyce explains. "It's a little bit crunchy, tender, sweet. It has everything!"

To make a good hand pie, you need to start with a good crust. Boyce makes a great crust, but when she first pulls the dough from her refrigerator, it doesn't actually look that promising.

"It's this really dry, crumbly dough," she says. "It's definitely not smooth."

The dough is full of chunks of butter that vary in size from a walnut to a pea. When Boyce starts rolling out this mess of a dough, things don't improve — at first. It's coming apart, it's shaggy on the edges and even starting to tear in places. But don't give up, she says.

"We're just gonna go with it. Don't stress, don't think about it too much. Just keep going."

There's a reason Boyce isn't worried. She's turning this messy dough, with its big blobs of butter, into something called a "rough puff pastry." She rolls it, folds it and chills it, over and over again, until it comes together. The butter bits start to become streaks through the dough.

In the oven, those buttery streaks translate into crisp, flaky layers. And once you've built a nice, flaky dough, you can move on to the filling — which can be hard to choose, especially during the summer harvest. Boyce loves marionberries and plums like the Santa Rosa, with its tart skin and soft, juicy middle.

Today, Boyce has fresh Oregon apricots from the farmer's market. She tosses them with a handful of marionberries (a type of blackberry), a little bit of sugar and a big dollop of apricot jam. But don't go overboard, she warns.

"The hardest thing when filling the hand pies is the tendency is to fill them really full," she explains. "We want a big, bountiful hand pie."

But too much fruit can make the hand pies sort of explode, Boyce says, or just make them hard to work with.

Also, you want to work fast, because as soon as the sugar touches the fruit, Boyce says, the juices start to activate. "We want that to happen in the oven, not right now. Otherwise you end up with a big saucy mess."

The hand pies are something of a mess to eat, anyway. They open a bit in the oven and juice oozes everywhere. But that's the point. The exposed fruit concentrates into a more intense, almost caramelized flavor and the crust's open edges show off all those flaky layers.

While hand pies are sturdy enough to take on a picnic, they are still surprisingly delicate. "It just gives you this great crackly crust," Boyce says. "And you bite into it and it shatters all over the place and makes a mess."

But what's a few crumbs when you're out on a picnic — especially with your own hand-held pie?

This recipe is adapted from Kim Boyce, owner of the Portland, Ore., bakery Bakeshop. Making this rough puff pastry is quite involved, with several turns and cold rests. It must be started at least a day in advance and the filled pastries must also be frozen prior to baking. To make things easier, you can pause at any stage and allow the dough to rest for several hours, or even overnight, to work the dough around your schedule. And the finished product is well worth the fuss.

2 to 4 tablespoons sugar, depending on the sweetness of the fruit

To make the dough, place dry ingredients in a stand mixer or food processor. Add butter and mix or pulse until broken down to sizes varying from peas to almonds to walnuts. Pour mixture into a large bowl and add the smaller amount of water recommended. Toss together and squeeze the dough to determine if more water is needed. The dough should just hold together, with shaggy dry areas as well as areas that are moister. If the dough is too dry, add the remaining water and toss. Transfer dough to a shallow container or wrap into a rough square in plastic wrap. Chill overnight.

After the dough has chilled, unwrap it onto a floured surface. Pat the dough into a square, then use a rolling pin to roll it into a rectangle about 8 1/2 x 14 inches. The dough will crumble and be rough around the edges, but don't add more flour or water — it will come together during rolling.

For the first "turn," fold the dough into thirds, like a letter. The seam should be on the left side. Chill 30 minutes.

For the second turn, take the dough out, this time with the seam at the bottom. Again roll the dough into an 8 1/2 x 14 inch rectangle and repeat the previous step. Chill 30 minutes.

For the third turn, repeat the previous step, then wrap the dough in plastic and chill for at least 2 hours and preferably overnight.

After the dough has chilled for the final time, roll it to a thickness of approximately 1/8 inch. Cut into 7-inch circles (if you don't have a cutter, you can draw a knife around the edge of a plate). Take any scraps and knead them together, then chill, covered, for an hour before re-rolling. Repeat until all of the dough is cut into circles. Keep dough circles cold while you prepare the filling.

To make the filling and finish the pies, cut the apricots in half and discard the pits, then slice them into slim wedges (maybe sixths or eighths, depending upon the size of the fruit). Place in a large bowl and add jam and sugar. Stir lightly to coat, then gently stir in the berries (being mindful not to mush them). The fruit should be glistening with a light coating of jam.

Take your prepared pastry circles and brush with the beaten egg. Fill the circles with the filling (just a handful of apricot pieces and a few berries), then fold into a half-moon shape and press a half-inch from the edge to seal (Boyce suggests not crimping the very edges themselves, to avoid compressing the layers). Place on a pan in a single layer, brush with the egg and sprinkle generously with the cinnamon sugar. Freeze for a minimum of one hour.

While the tarts are freezing, preheat the oven to 375°F. When the hand pies are frozen, line a few baking sheets with parchment and place the hand pies on the sheet (with ample space between them).

Bake for 45 minutes to an hour, rotating the pans halfway through. The tarts are ready when the crusts are dark golden-brown and blistering, the fruit is bubbling and perhaps some juice has run from the hand pies and caramelized on the parchment paper.

(Boyce stresses that color equals flavor. And with such a high crust-to-filling ratio, she says, you don't want it doughy — so try to let the pies get a bit darker than you might be inclined). Remove pies from the oven, and immediately transfer the hand pies to a cooling rack, before the caramelized juices cement them down.

Serve the hand pies warm from the oven or later that same day. The unbaked hand pies will keep, well wrapped and frozen, for up to one month.