Accessibility links
In West Virginia, A Band Camp Of Sorts Prizes Old-Time Music When classes began at the Augusta Heritage Center in the early 1970s, the idea of creating workshops to preserve traditional culture in an institutional setting was still a bit of a novelty. Today, the center's music camps are internationally recognized. 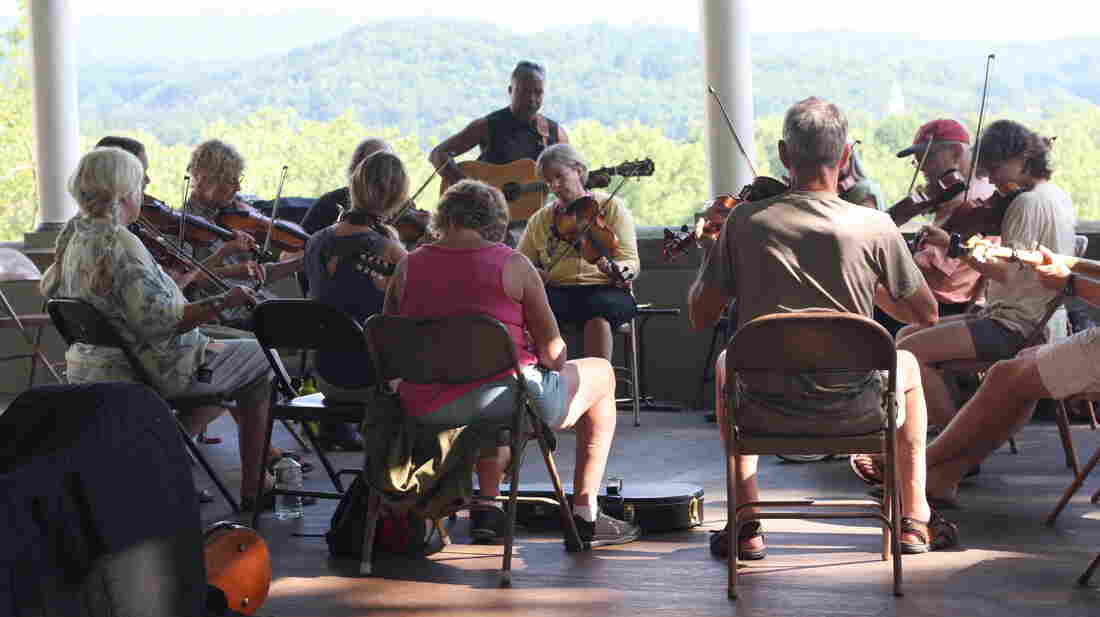 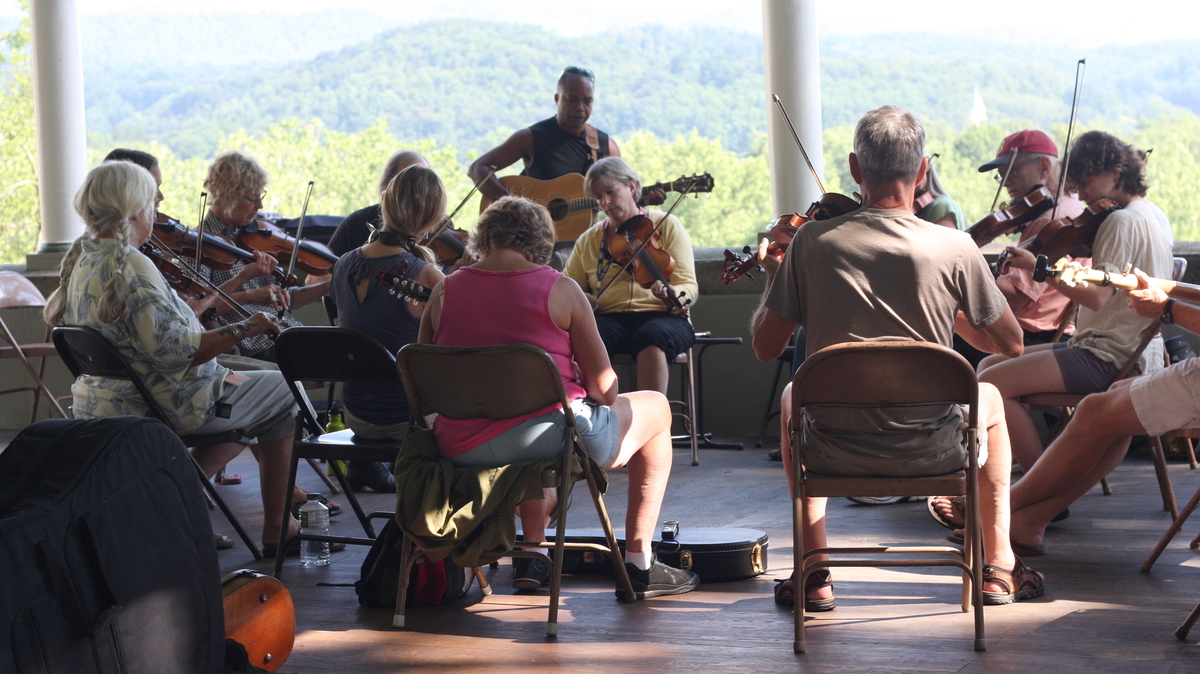 A group of 20 students sits in a big circle in the front parlor of a Victorian mansion at Davis & Elkins College. Everyone has a fiddle. And all eyes are on the teacher. Heads bop and toes tap as Dave Bing plays a West Virginia tune called "Camp Chase." Outside, a bevy of banjos plink out a mournful melody. Down the road the mandolin and guitar classes combine to jam on a new tune they've learned.

It's old-time week at Augusta Heritage Center in Elkins, W. Va. It's one of about a dozen week-long, themed music camps spread out over the summer. The program is part of a larger series of workshops, which began here in 1972, dedicated to preserving the traditional arts of the Appalachian mountains Almost 200 students came here to learn about old-time music, the stuff that came before bluegrass. It's historically passed down by ear on front porches and in kitchens of rural America. Augusta is basically a band camp for people of all ages; in addition to the classes and jam sessions, there are concerts, and of course, square dancing.

When Augusta began, the focus was on crafts, not music. A small group of local women hatched the idea in the fall of 1972. They were weavers and spinners and quilters, masters of crafts that had been passed down in their families for generations.

But they worried that local traditions were dying out. So the following summer, they held the very first Augusta workshops. From the beginning, traditional music was a part of the mix.

The late Melvin Wine is one of many voices included in Augusta's archives. He was an elder statesman of this music and a beloved regular at Augusta. He lived his whole life in Braxton County, W. Va. Wine was 93 years old when he passed away in 2003.

And the reality is that today, most revered musicians of his generation are gone. But every year, scores of musicians come to learn from those who learned from the elders — like George Yost, a bass player from W. Va. This is his fifth year at Augusta.

"I came here to learn how to play music, but it's more than just music," Yost says. "You learn about the history and heritage of West Virginia. It's really pretty nice."

In 40 years, Augusta's become a huge success. Its reputation is known all over the world. Pepi Emmerichs is a 20-year-old jazz fiddler from Australia. She spent this past summer learning the tricks and quirks of American roots music.

"With every tune there seems to be some kind of wacky story and they all have crazy names, which I really like," she says.

Back at Dave Bing's fiddle class, he takes his students through "Camp Chase" phrase by phrase. Bing hails from Harmony, W. Va. He meets with his class for three hours every morning, taking them through the state's fiddle styles and digging into each tune's origins.

He says "Camp Chase" came from a Pocahontas County fiddler named Burl Hammons, who died in 1993. Hammons and his contemporaries had no formal music education. They never even named the notes.

It's easy to get romantic about the good old days.

"I like to think there's still a hole in the rocks way back up some holler where all the tunes come out. In reality, tunes get passed around in all kinds of ways," Gerry Milnes says.

Milnes has worked at Augusta for over 20 years. He's a folklorist and has spent decades documenting traditional old-time music. And he acknowledges the place of this music in the modern age. With YouTube and iTunes, it's gone from local to global. Ancient ballads and mountain melodies are just a click away.

"I think there was a time when people really didn't have to decide what kind of music they want to play. It was like, your dad played it, so you played it," he explains. "And you have to face facts. Those days are probably gone now. You're barraged with so many different kinds of music now that you have to make choices."

Fortunately, thousands of musicians have chosen to come to Augusta over the past 40 years to learn music firsthan — to sit knee to knee with other musicians, look them right in the eye, and enjoy a few tunes together.