Accessibility links
The Algae Is Coming, But Its Impact Is Felt Far From Water From China's Yellow Sea to the Great Lakes to the Gulf of Mexico, agricultural waste in the water system is fueling spectacular algae blooms. The masses of slime cause dead zones in the water and major losses in tourism revenue in affected towns. But the algae fight doesn't begin at the water's edge; it starts in the fields and pastures. 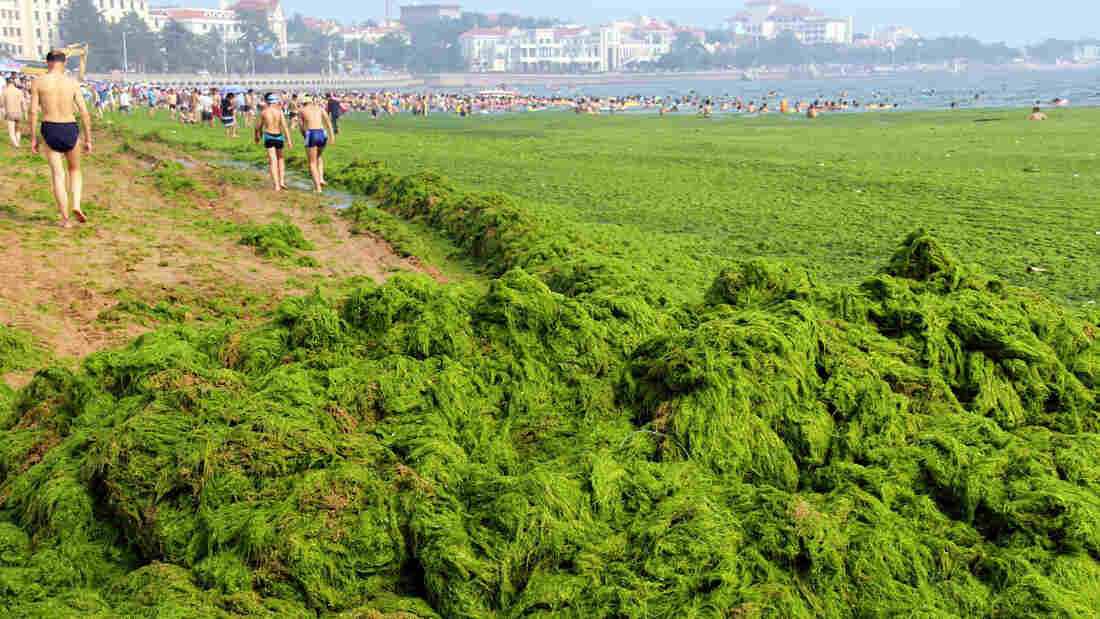 Chinese beachgoers walk by an algae-covered public beach in Qingdao, China, in July. The seas off China have been hit by their largest-ever growth of algae, ocean officials say, with waves of green growth washing onto the shores. AFP/Getty Images hide caption 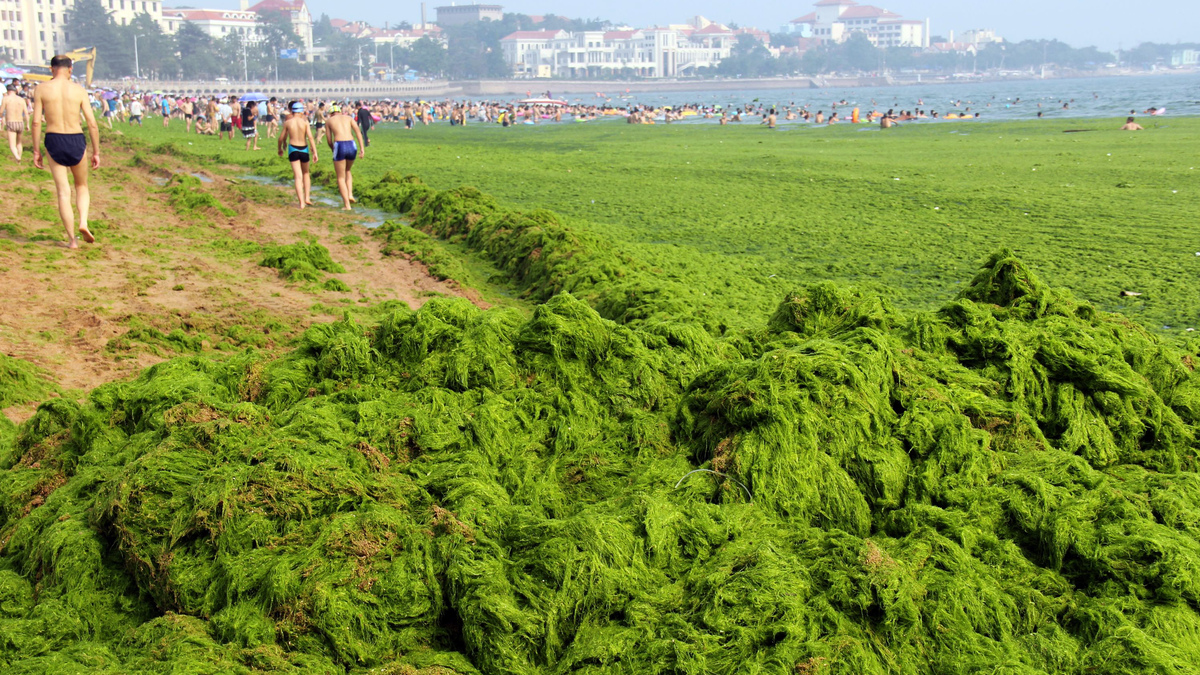 Chinese beachgoers walk by an algae-covered public beach in Qingdao, China, in July. The seas off China have been hit by their largest-ever growth of algae, ocean officials say, with waves of green growth washing onto the shores.

Algae blooms are green or red or brown, slimy, smelly and you don't want it coming soon to a waterfront near you.

Most of us don't give a lot of thought to algae until the furry-like monstrosity is spreading over beaches, rivers, lakes and bays, but gigantic algae blooms have become an increasing problem around the world.

The danger algae blooms pose is that they sap the body of water where they are growing of nutrients and oxygen; they then die, decompose and rot.

[The cost is] in the billions, and a lot of that comes from the decrease in property value from water that looks just noxious and green and slimy.

"Fish can't live in there. This happens in coastal areas, it's happened in the Chesapeake Bay, [and] it's happened on a massive scale in the Gulf of Mexico," says NPR's food and agriculture correspondent Dan Charles.

Part of proliferation of algae blooms is due to agricultural demands.

Imagine for a moment you're in Eastern China, with temperatures in the upper 90s and extreme humidity making life in the city unbearable. So you head to the shore for a special weekend on the resort beaches of the Yellow Sea in the city of Qingdao.

But instead of refreshing blue waves, a carpet of what looks like green fur stretches across the sand and over the ocean as far as the eye can see. Piles of the green, algal slime are as much as 10 feet high. This area of China is home to some of the biggest algal blooms on the planet.

"In truth it dwarfs any other of the algal blooms that we deal with all over the world," says Don Anderson, the director of the U.S. National Office for Harmful Algal Blooms and a senior scientist for the Woods Hole Oceanographic Institution.

The algae, Anderson tells NPR's Jacki Lyden, derives from seaweed farming, the edible kind that gets wrapped around sushi. The seaweed grows on underwater bamboo stands, but those grow nonedible algae, too. When farmers clean it off, it washes to shore; fertilizer runoff exacerbates this massively.

Closer to home, algae has plagued coastal Florida this summer, and blooms are predicted for the Gulf of Mexico and Lake Erie.

Oceanographer Richard Stumpf, with National Oceanic and Atmospheric Administration, recently returned from a research station on Lake Erie. Stumpf is in charge of forecasting hazardous algal blooms, and expects to see a significant bloom this year.

"The bloom just started in the past week on the far western part of the lake," Stumpf tells NPR. "There was scum on the surface of the lake." 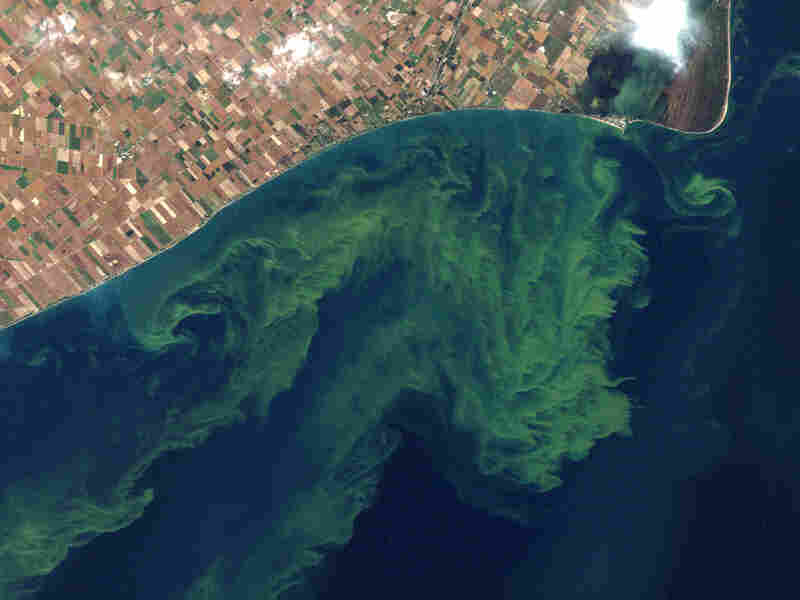 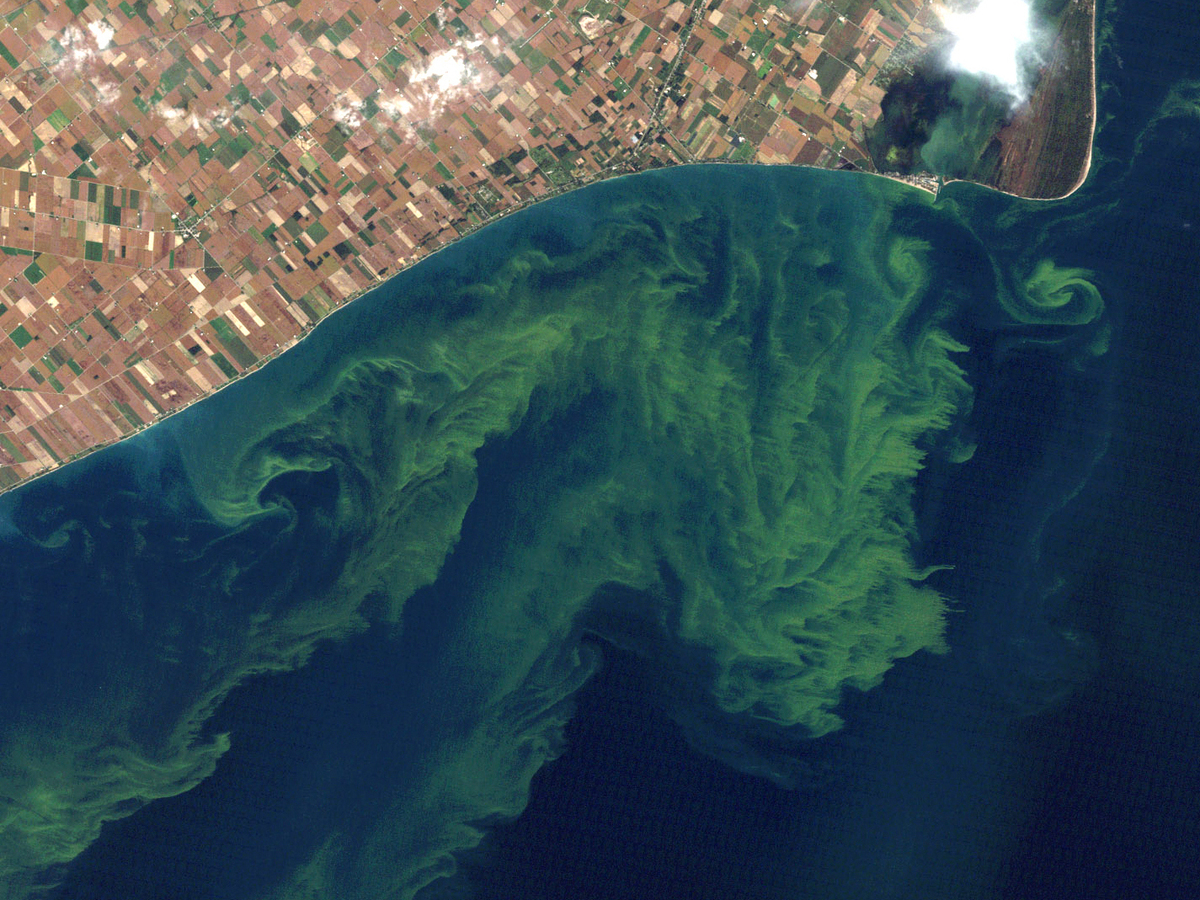 A 2011 satellite photo shows algae blooms swirling on Lake Erie. Experts are expecting another large bloom this year on the lake.

But Stumpf says this year will not be as bad as 2011, which saw a record-breaking bloom of blue-green algae stretching from Toledo to Cleveland.

"I talked to a charter boat captain, and he went out two years ago and for 10 [to] 15 miles he went through scum," he says. "You can say he lost customers."

Stumpf's goal with the algae forecast is not just to predict where the algae is, but where it is not, so that people in unaffected areas of the lake don't lose tourist revenue because the whole body of water has a bad reputation for algae.

It is a problem that has plagued Grand Lake St. Marys in Ohio for years, an area some residents consider the "poster child for blue-green algae."

Residents like Milt Miller are well-acquainted with the algae. He and a group of residents have had enough with the persistent blooms and are trying to get rid of it.

"The lake touches every facet of our lives whether it be recreationally [or] employment wise," Miller says. "Real estate prices around the lake plummeted."

Miller also says that it is not just the people with lakefront property who are affected. Because of the summertime residency, everything from car washes to laundry mats to supermarkets and big box stores feel the pinch of a lack of tourists the algae blooms cause.

"So it's not limited to areas immediately adjacent to the lake, it literally impacts all every fragment of our whole society," he says.

Anderson agrees, and says that conservatively the algae blooms have about a $100 million a year impact on the U.S. — and that's just on the marine side of the picture.

"The freshwater estimates are in the billions, and a lot of that comes from the decrease in property value from water that looks just noxious and green and slimy," the scientist says. The algae can also produce toxins, Anderson says, that can kill fish and birds and even be harmful to humans.

Combating It At The Source

Some farmers are trying to reduce their impact by cutting off this problem at its source: the farm.

Agriculture is the central part of the story when it comes to algae blooms. As a species, we have to grow a lot of food to survive. To do this, we use a lot of fertilizer that has ingredients like nitrogen and phosphorous, which is very important for plant growth.

"The thing is, by fertilizing the planet, we end up fertilizing everything," says NPR's Charles.

That "everything" includes streams, lakes and oceans. That is what feeds the algae bloom.

Clagett Farm is a model farm owned by the Chesapeake Bay Foundation. One of the things they do is try to educate farmers in the watershed about their impact on the Bay.

Michael Heller manages the Clagett Farm in Maryland, and he knows the dangers of nutrient runoff. He says solutions to water quality have to start a lot earlier in the agriculture process.

"I think this is the most important point we can make is that every part of the farm is important for runoff," Heller says. "Too often the focus is right at the streams, but it's what's happening up in the fields that's most critical."

Heller says that at poorly managed farms, livestock often endanger watersheds. Herds of cows erode the ground leading to soil runoff. That runoff gets mixed with nutrient-dense manure and fertilizer, which eventually makes its way to the Bay.

But at the Clagett Farm, nitrogen-absorbing legumes abound and cows are moved from pasture to pasture to maintain fresh fields. Fencing always keeps the animals away from the stream.

The fences are just the first layer of the filtering process on the farm. Past the electric fences is a road that acts as a grass buffer, and just off the road is a dense forest. The soil here is mostly organic matter that Heller says acts like a sponge.

"That's not going to allow any nutrients or water to run off," he says. "So by the time that droplet hits the stream, it has little or no sediment in it and very minimal or no nutrients in it, so that what we're sending down to the Bay is a positive thing."

Heller says the key is a holistic approach, and that's the way more and more farmers are starting to think.

"Does the system work? The cattle, the veggies, the hay, the pasture; do they all fit together in a system that works and protects water quality?"

The fight against algae doesn't start and end with the farmer, however. You can help too, says NPR's Charles, by holding off on fertilizing your lawn.

"A beautiful green grassy lawn is not natural, and you're probably putting more nutrients on there than it really needs," he says.