Accessibility links
Firefighting's First Female General Makes Order Out Of Chaos Jeanne Pincha-Tulley is a Type 1 incident commander, the wildland firefighting equivalent of a one-star general. She manages the most destructive and most complex wildfires. Incident command teams, she says, are "used to taking complicated and making it work." 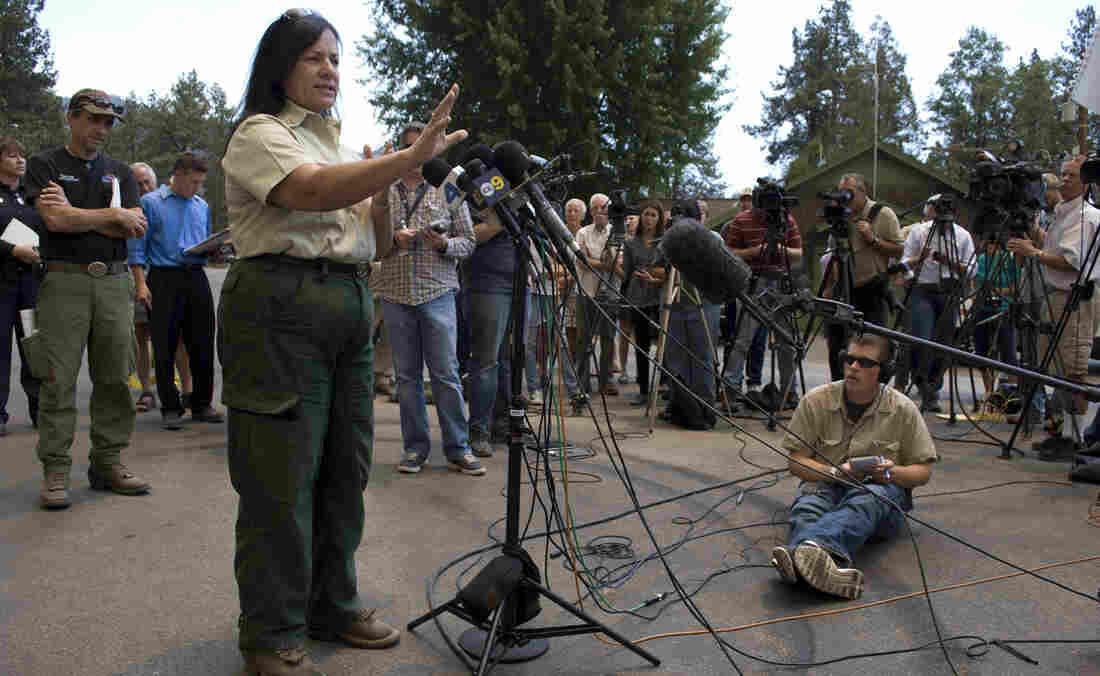 Jeanne Pincha-Tulley, a Type 1 incident commander, addresses the media in the then-evacuated town of Idyllwild, as the Mountain Fire grows closer. Pincha-Tulley has a reputation for being frank and direct with the media and public. "For the next two days," she said, "the fire is going to put embers right over this town." Nate Rott/NPR hide caption 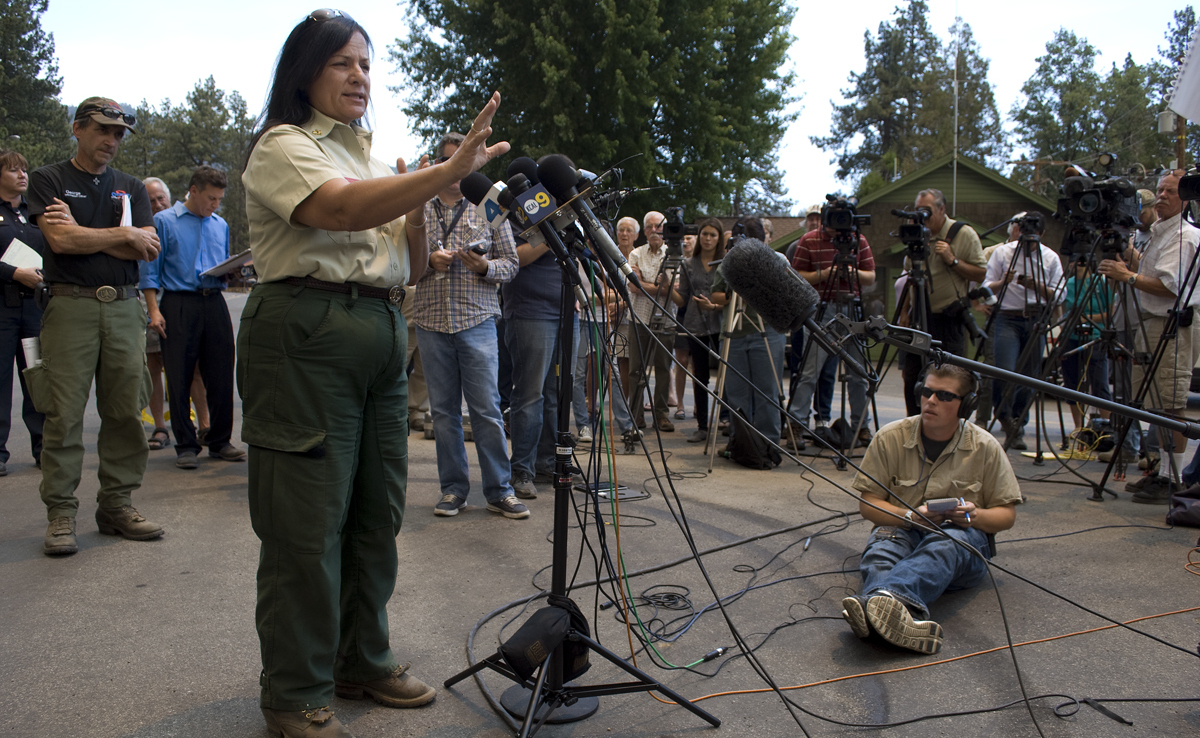 Jeanne Pincha-Tulley, a Type 1 incident commander, addresses the media in the then-evacuated town of Idyllwild, as the Mountain Fire grows closer. Pincha-Tulley has a reputation for being frank and direct with the media and public. "For the next two days," she said, "the fire is going to put embers right over this town."

A line of dirty fire engines rumbles off of Southern California's Pine to Palms Highway into an open field, trailing a cloud of brown dust. The drivers' faces are smudged with black soot.

Across the road, helicopters land to fill with water and fuel before whacking their way back up through the smoky sky. The scenic San Jacinto Mountains behind them are bare and black, burnt clean of tree and bush. Puffs of gray smoke rise like faint ghosts.

Jeanne Pincha-Tulley watches as one helicopter rises and veers to the north. It looks like a gnat compared with the big, billowing column of gray that's rising over the furthest ridge.

By all of that "other crap," Pincha-Tulley means more than 3,000 firefighters, two dozen aircraft and the 20,000-acre inferno that is putting up that plume of smoke. Pincha-Tulley is responsible for all of it.

Thousands of fires flare up in the West every year. They range in size and ferocity. The smallest fires are classified as Type 5 fires. They may be no bigger than the size of your car. They are easy to manage and suppressed in hours.

A Hotshot Bit By The Shutter Bug

The bigger the fire, the lower the number. Type 3 fires are larger, perhaps hundreds of acres, requiring more resources and more time. Type 1 fires are in a class unto themselves. They are the most complex, the most destructive and most expensive to extinguish. They require the most resources and the most time. They are the fires that you see burning across your television screen on the nightly news.

As such, only 17 people nationwide are qualified to manage them. They are the elite of the elite. Pincha-Tulley is one of those 17 — the first and, until recently, only woman to attain that rank.

Pincha-Tulley's leather logger boots clang up the makeshift metal stairs that lead to her command post: a bare-bones trailer in a line of others. The rest of the fire camp calls it Main Street.

There are more than 3,000 firefighters at this makeshift camp next to Lake Hemet, Calif. That's not to mention the cleaners, caterers and others who are here to support it. In 24 hours, it has become the largest town in the valley. "It's not uncommon for us to outnumber the towns around us on these fires," Pincha-Tulley says as she walks in.

There are two maps taped to the walls and an untouched sack lunch sitting on the counter. Pincha-Tulley hasn't had time to eat. The fire's been moving too fast.

She squints up at one of the maps, straight black hair tucked behind her ears, hands behind her back. Her boots give her a needed bit of extra height.

The mountain fire is delineated in squiggly red on the map — all 37 square miles of it. It sprawls across the topographical lines, crossing ridges and ravines. The small mountain town of Idyllwild is to the west of it; the resort town of Palm Springs to the east. The fire in between has already torched 23 structures. At this time, the mountain fire has been designated the national priority.

The firefighter in me is like, 'Yeah, I wish I could go up there.' But I got all of this other crap I got to deal with, so I'm like, 'Really?'

A fuels expert will later say that the wood is between 3 to 4 percent humidity. The trees are burning like grass.

As Pincha-Tulley studies the map, her operations chief, John Lane, walks in. He's just back from the fire line with an update.

"I've blackened everything all the way to Delta today on the map," he says, pointing to the slash marks on the map that designate division breaks. With a fire this big, they have to break its perimeter into divisions to make it manageable.

Pincha-Tulley listens and texts other members of the team while Lane continues with his update. Being in the incident commander's trailer is like being in a hive. There's a near-constant buzz.

In the time it takes Lane to give an update, the area fire chief for Cal Fire walks in, as well as a liaison for the sheriff's office, a member from communications and a guy from finance. Pincha-Tulley scribbles her signature on a form as a radio update comes in.

"And secondly, the retardant line with the helicopter across that ridge there heading towards the wilderness is progressing really well," according to the update.

Lane then explains that the fire has crossed over their containment line in one section. They're calling in the largest air tankers, DC-10s — or VLATs for Very Large Air Tankers, as firefighters call them — to try to box in the new threat before it spreads. Pincha-Tulley asks how that's progressing when the radio squawks again: "So far we've been pretty successful with that."

"There's your answer," Lane tells her. "It's being dealt with."

The radio update ends, and Lane goes back to his briefing. "Once we get out there a ways," he says, tracing the lines on the map with his fingers, "there's just nothing. It'll never..." He stops, knowing he just broke one of Pincha-Tulley's rules. "I'll shut up," he says. "I won't say that."

Never say never. That's one of the rules on Pincha-Tulley's team. It's a superstitious rule, Pincha-Tulley says, but one that's grounded in experience. "In these exceptional years, never is becoming something that could occur, so you got to plan for it," she says. 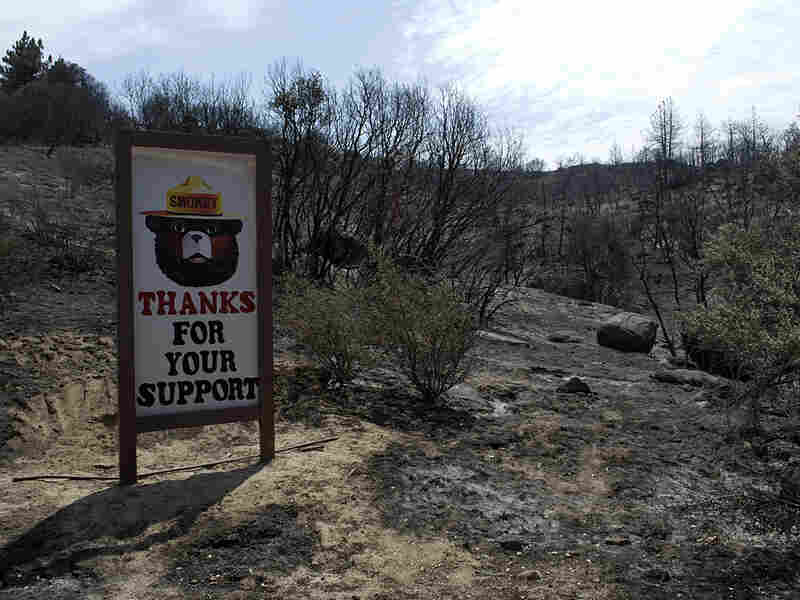 A Smokey the Bear sign stands undamaged by the flames that raced by it two days earlier on their way to engulfing 42 square miles of the San Jacinto Mountains in California. The sign sits next to the Esperanza Firefighters Memorial Highway, named after five firefighters who died battling the Esperanza Fire in similar terrain in 2006. Nate Rott/NPR hide caption 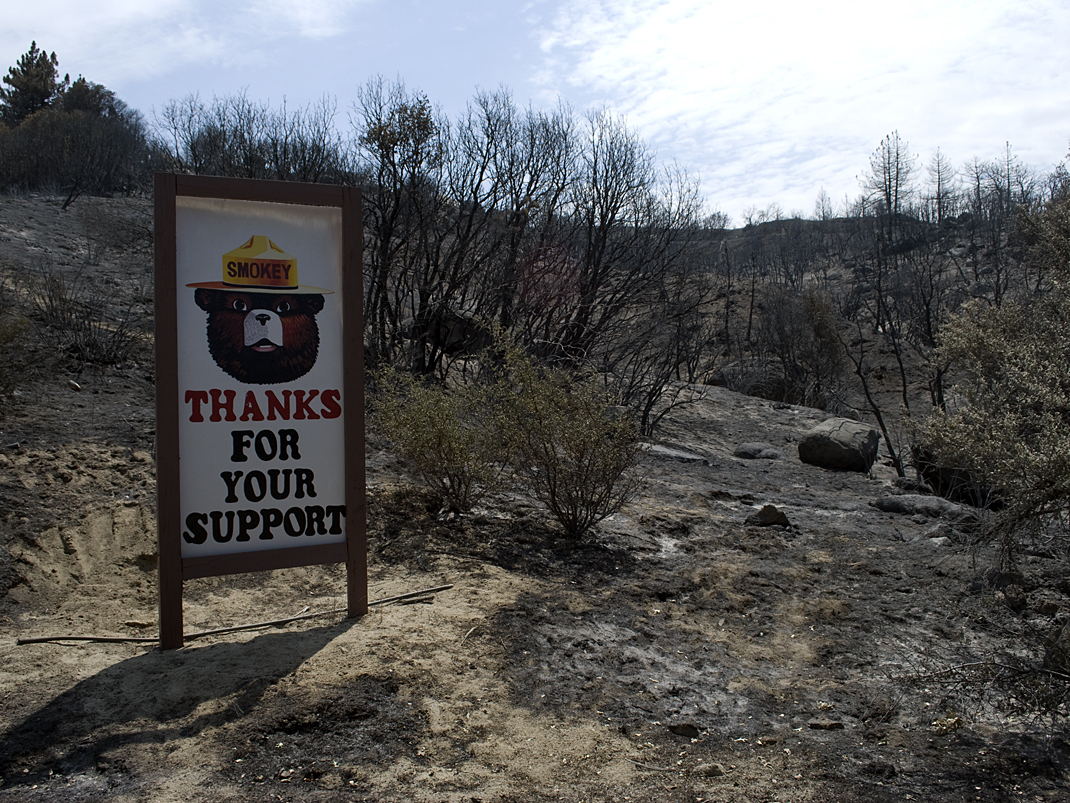 A Smokey the Bear sign stands undamaged by the flames that raced by it two days earlier on their way to engulfing 42 square miles of the San Jacinto Mountains in California. The sign sits next to the Esperanza Firefighters Memorial Highway, named after five firefighters who died battling the Esperanza Fire in similar terrain in 2006.

Pincha-Tulley started firefighting like most young men and women do — at the bottom, on a hand crew. At 19 years old, she got on a crew in Washington's Mount Baker-Snoqualmie National Forest outside of Seattle.

She worked her way up through the ranks, on hand crews and helicopter crews, to captain and chief, aiming for the highest position a wildland firefighter can achieve: a Type 1 incident commander.

The position is comparable to a one-star general in the military, a fact Pincha-Tulley would learn while serving as one in the aftermath and cleanup of Hurricane Katrina. Type 1 incident command teams aren't just used for fires. In recent years, they've been summoned for other domestic disasters as well, like Hurricane Sandy and recovering the wreckage of the space shuttle Columbia.

"Think of us as 911," Pincha-Tulley says. "We're really good at taking chaos and making order out of it. We're used to taking complicated and making it work."

And she's had plenty of practice at it. Pincha-Tulley has been a Type 1 incident commander for nine years, which is remarkable; they usually time out after five. The job is demanding and requires a lot of time away from home. Spending more than a quarter of each year chasing massive wildfires, managing thousands of people and working up to 16-hour days takes a toll, especially when you have a family. Pincha-Tulley has two children. They know the drill, she says. This is her job. And she's one of the only people in the country qualified to do it.

It's taken her decades to get to this point and she still loves it as much as she did that first summer. At home, being the equivalent of a one-star general doesn't get her much respect, she says.

"My kids are half-Italian, half-Irish. They don't give a damn," she says. But out here, surrounded by a community of mostly men, her experience and skill earn her a evident respect.

Out here, she jokes, "I'm the queen of a testosterone-poisoned world."

As the afternoon deepens and the temperatures rise, Vaughan Miller, Pincha-Tulley's deputy incident commander, returns from a flight around the fire with news.

"It doesn't look good, Jeanne," he says, "just to be honest with you. That thing's starting to heat up up there. That's actually gonna be bad because you're going to have to get people out of the way of that thing."

"Damn," she says. They decide to put out more evacuation warnings — these for the town of Pine Cove, Calif. About 6,000 people have already been evacuated.

It's a decision Pincha-Tulley doesn't take lightly. She knows what it means to homeowners and businesses. "It's a big decision. Don't misunderstand me, it's a huge decision," she says. "But I've dealt with fatalities. That's bigger."

Houses can be replaced, she says. People can't. "We can't replace those 19 kids in Yarnell [in Arizona] or the 25 people we've lost on fires already this year," she says.

The deaths of the Granite Mountain Hotshots on the Yarnell Hill fire earlier this year loom over the camp like the fire's plume. It's never far from any firefighter's mind, especially when the fire they're fighting is tearing through trees like grass.

"You can feel it in our world," Pincha-Tulley says. "Our hotshots are like, 'Whoa, OK, now wait a minute.' So it's good that they [are] tackling this and making good headway on this fire because we need them to be confident because they're good at what they do."

That's just another thing she has to take into consideration when deciding who goes where. It's a monumental task, as complex as the fire she's tasked to put out, but that's what being a Type 1 incident commander is all about: balancing resources and risks and what ifs, she says.

Granted, Pincha-Tulley may prefer to be on the fire line, using a shovel instead of a cell phone to fight fire. But with more than 30 years of experience, few — if any — are better suited for the task at hand.