Accessibility links
Red Cross For Rover: Inside America's Canine Blood Banks When your dog gets a transfusion — during surgery, or if it has contracted any number of blood-damaging diseases — where does the blood come from? Much of the time, the blood products come from canine blood banks. But these days, demand for canine blood products often outstrips supply. 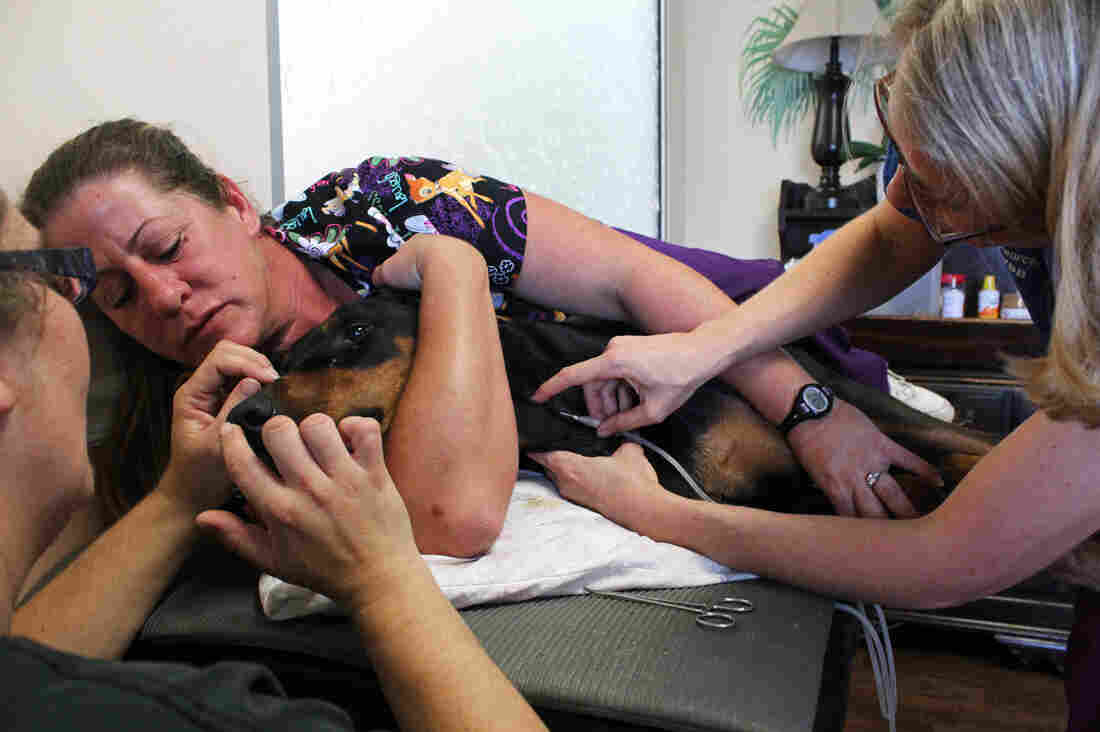 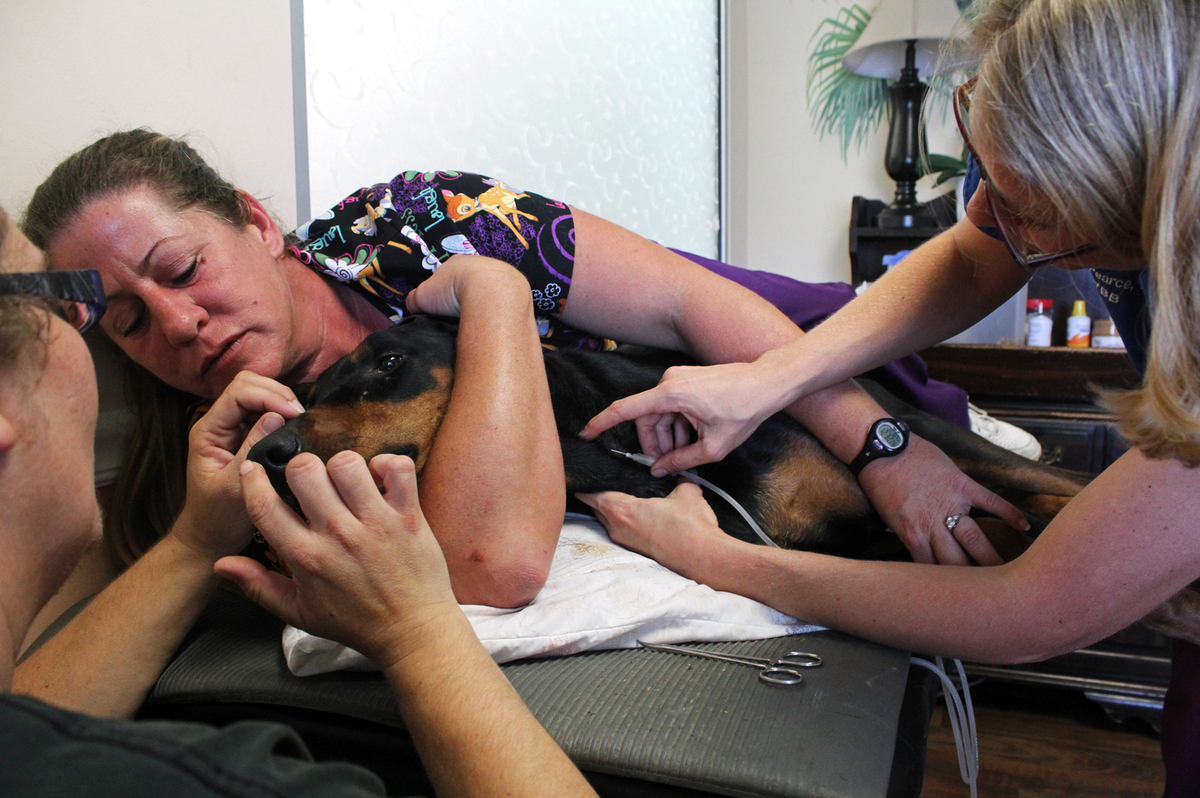 America is facing a blood shortage — a shortage of dog blood. Whether Fido tangles with a car and loses, or Barky contracts a blood-damaging disease, dogs — like their people — sometimes need transfusions. And while there's no centralized Red Cross for Rover, there are a few commercial canine blood banks across the country, and many veterinary schools do their own blood banking.

But veterinarian Jean Dodds, who runs a canine blood bank in Garden Grove, Calif., called Hemopet, says meeting the demand for canine blood proves a tricky proposition — and some times of the year are trickier than others.

"It happens nearly every holiday season and in summertime when epidemics of parvovirus occur," Dodds says. Parvovirus is highly contagious, affects mostly dogs and can require plasma transfusions.

Dodds says the nation's blood banks are still recovering from the Fourth of July holiday, when veterinary clinics across the country stocked up on blood products. When Hemopet runs dry, Dodds says it works with vets to try to find supplies from other blood banks.

"If anybody [from other blood banks] has a few units left over for a crisis situation, we share amongst everybody so we can meet the needs of the country," Dodds says. "But you can never do that. We do the best we can."

Dodds is the grandmother of canine blood banking. Early in her career, she worked with animals with bleeding diseases like hemophilia. By the early 1980s, even though she's a veterinarian, Dodds was running New York State's human blood program.

"I realized that we needed to have something like it for veterinary medicine," she says.

So Dodds helped researchers get funding to advance the science. And she made the rounds of veterinary schools across the country doing what she calls her "dog and pony show." (She's not joking about the dogs and ponies.)

"We had to teach the whole process of what blood types were and what cross-matching was, how to prepare blood in components as opposed to whole blood," Dodds says. "In other words follow exactly what is done with the Red Cross, for example."

Before, when a dog needed a transfusion, most vets just called up someone who owned a big dog, and transfused blood whole. That still happens today, especially in rural clinics where getting blood products delivered might take too long.

But Dodds says having the blood broken down to its component parts is better: Packed red blood cells are used for treating trauma as well as some cancers and autoimmune diseases. Plasma she says, "is very, very helpful to treat infectious diseases like parvovirus," because it contains antibodies.

But actually getting the doggy donor blood in the first place is where the similarities stop. Think about it: You can't just roll up to a gymnasium or rec center, set up some chairs and juice boxes, and ask volunteers to come in and give blood the way the Red Cross does. It'd be a big barking disaster. 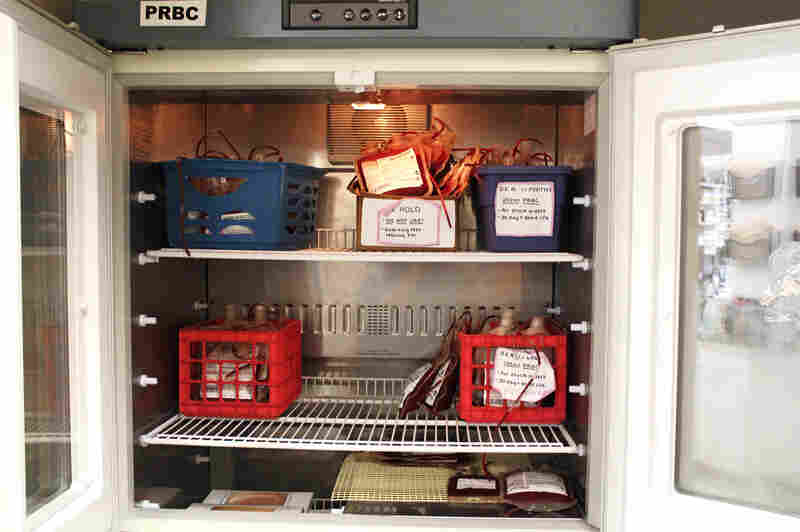 "It's pretty slim pickin's," Blue Ridge Veterinary Blood Bank manager Jocelyn Pratt says of the fridge where she stores packed red blood cells before they are mailed out. More than half of these will be gone by the end of the day, she predicts. Christopher Connelly/NPR hide caption 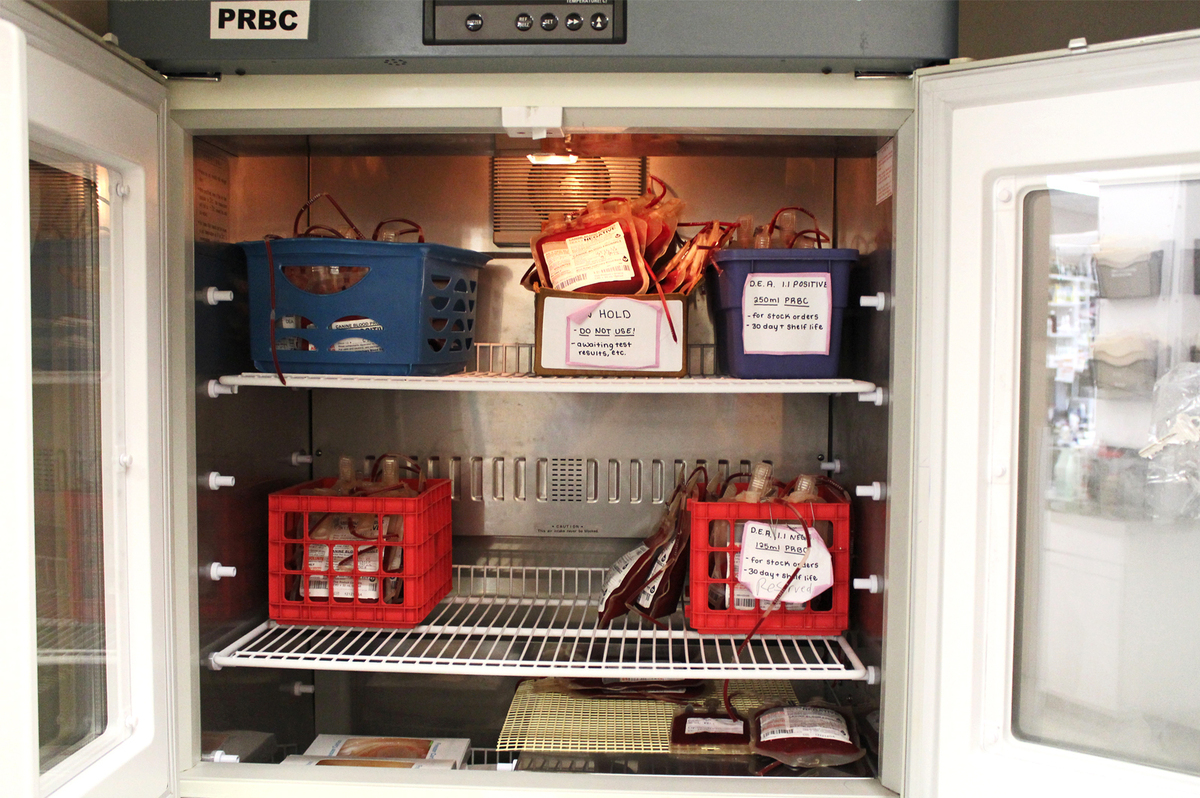 "It's pretty slim pickin's," Blue Ridge Veterinary Blood Bank manager Jocelyn Pratt says of the fridge where she stores packed red blood cells before they are mailed out. More than half of these will be gone by the end of the day, she predicts.

Dodds' Hemopet is also a greyhound rescue, so she gets blood from this colony of about 200 mostly former racing dogs before they're adopted out. She says it's a way to give them a good life, while providing lifesaving blood products for pets across the country. California is the only state with veterinary blood banking regulations — and requires veterinary blood donations to come from a closed colony.

At about 26 sites across Virginia, Maryland and West Virginia, teams from Blue Ridge collect blood from regular donor dogs that donate every six weeks or so.

While the dogs' owners are clearly volunteering — both their time and the gasoline it takes to bring their pups in — phlebotomist Rebecca Pearce insists the dogs volunteer as well. The dogs are rewarded with treats and praise throughout the process, and Pearce practices a few times before taking blood to make sure the animals are comfortable.

"You can't communicate with a dog on a verbal level," Pearce says. "But if we get them to the point that they're happy and they know what we want from them and they understand, then they're more likely to donate over and over again."

Her business partner, Diane Garcia, is a key component to the Blue Ridge model. Garcia is a dog holder, she tells me happily.

"I lay down on the table with the dog, and I snuggle," Garcia says, smiling. "I have the best job in the world."

On a recent Tuesday morning, Pearce and Garcia are taking donations at home base — in a sunny exam room at the Blue Ridge clinic. Rupert is first up today, a docile black mutt with a lion cut.

Pearce gives him a quick checkup and then she and Garcia coax him onto the table, plying him with treats and peanut butter. Garcia climbs up on the table with him and settles in, spooning Rupert so he stays relaxed and still.

After Pearce shaves a patch of hair on his neck and scrubs the spot clean — cooing to him the whole time like a pediatrician about to give a child a shot — she quietly, gently inserts a small needle into his jugular vein. Rupert hardly seems to notice; he's way more interested in the food at the end of the table.

A couple of minutes and several treats later, she has bagged about half a pint of blood. The whole process from start to finish takes about 20 minutes; Pearce and Garcia can see up to seven or eight dogs in a day.

Carrie Smalser drives an hour to bring her dogs in for their regularly scheduled donation.

"I deal with lost dog and cat rescue – I'm a foster for them – and I see how many dogs and puppies go through parvo," Smalser says, getting a little choked up. She says she's had puppies revived with blood products from Blue Ridge, so it's a matter of giving back.

Two-year-old Cyrus has been donating for more than a year now, she says, and Leon, a one-year-old Doberman, is pretty new to donating. He seems a little nervous, but settles in with dog snuggler Garcia and lets Pearce take blood.

After Smalser leaves with Cyrus and Leon, a couple comes in with four greyhounds, ready to take their turn hopping up on the table and giving blood.

Blue Ridge ships about 150 units of packed red blood cells and plasma every week to veterinarians across the country on average, according to blood bank manager Jocelyn Pratt. Each unit costs upwards of $100, but Pratt says running a blood bank — even a volunteer-donor blood bank like hers — is a costly endeavor, and no one is getting rich doing it.

"The staff members, the human-grade blood collection bags, the guys behind scenes back here who process it," she says, listing the costs that go into a unit of blood. "Shipping's very expensive, gasoline's expensive and Styrofoam coolers are expensive."

Blue Ridge only trafficks in canine blood products. Same for Dodds' Hemopet in Southern California. But cat fanciers should worry not. Feline blood banks do exist. However, as any cat owner can tell you, cats are much more complicated.