Accessibility links
Beyond Books: Libraries Lend Fishing Poles, Pans And People Librarians have to get creative to reach out beyond their faithful fans and engage with more members of their communities. So some libraries have started lending out tools like fishing poles, and others offer "human books" — volunteers with special expertise or interesting experiences. 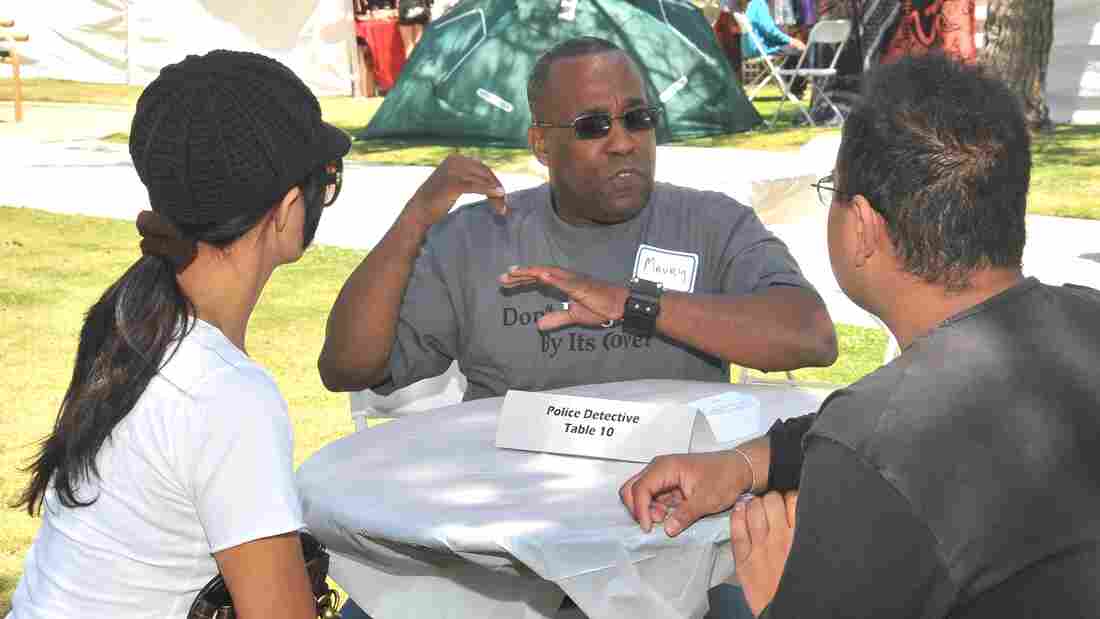 At a Human Library event at the Santa Monica Public Library, a police detective "book" talks to two "readers." Human Library events and projects, which are held at libraries across the country, allow participants to "check out" volunteers and have conversations about their life experiences. Annie Wyndham Solomon (Wynsolo Photography)/Santa Monica Public Library hide caption 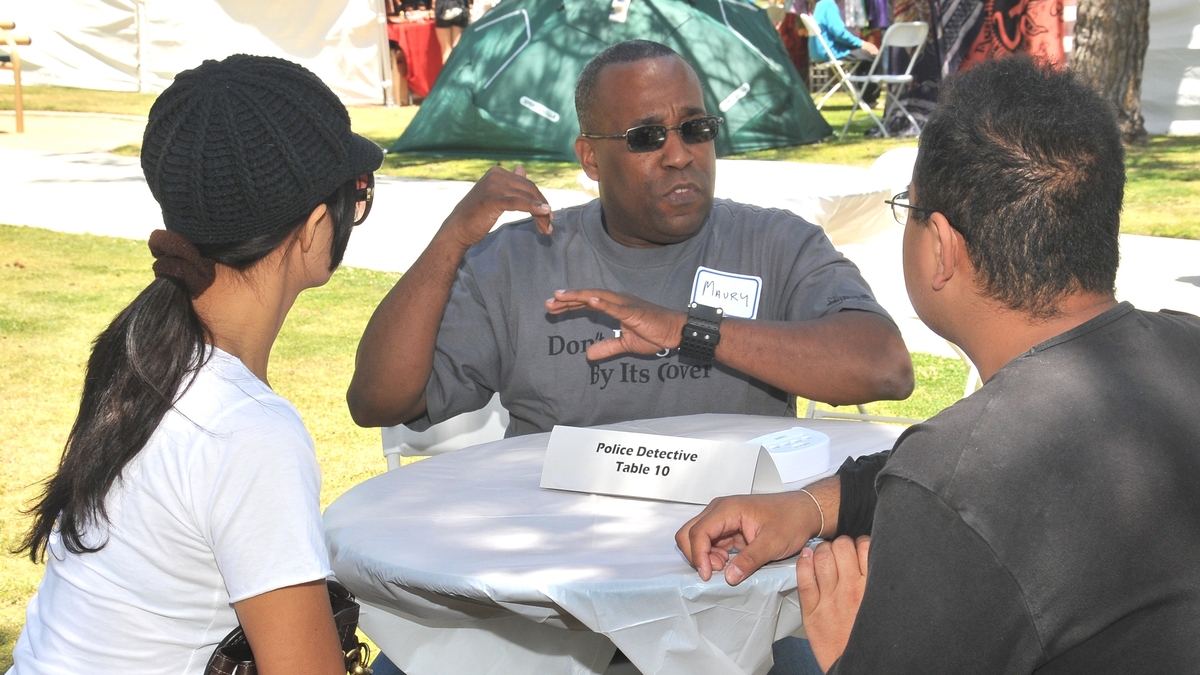 At a Human Library event at the Santa Monica Public Library, a police detective "book" talks to two "readers." Human Library events and projects, which are held at libraries across the country, allow participants to "check out" volunteers and have conversations about their life experiences.

What's the point of a library in the digital age? It's a question that makes librarians bristle. They are quick to remind you that they are not just repositories for printed books and DVDs. Regular patrons know this, but public libraries want to reach beyond the faithful. To that end, many librarians are finding creative ways to get people through the doors despite their limited resources.

Take the Honeoye Public Library near Rochester, N.Y. It's one of a handful of branches in New York that lends out fishing poles — yes, those things you use in the great outdoors, far away from bookshelves. Wendy Krause, the library's director, says the New York State Department of Environmental Conservation provides the library with eight poles, and the local Fish and Game Club gave funding for tackle boxes. "When a customer takes out a fishing pole, they get a little tackle box with some backup hooks, and sinkers and that kind of thing," says Krause. For bait, she recommends the gas station across the street.

So how do fishing poles fit a public library's mission? Krause says its job is to inform and enlighten, but also to connect its patrons with the community. The Honeoye Library is in the Finger Lakes region, where you can fish year-round, so this is a way for the library to speak directly to the people they serve, where they're serving them.

Other libraries try to bring people in simply by offering things they might need around the house, like toys, pots and pans, tools — and even humans.

"There are people in the community who say, 'I'm an expert at electronics or plumbing. So put me in the catalog,' " says Barbara Stripling, president of the American Library Association. She says locals tell libraries, " 'If somebody has a question that I can help answer, they can check me out.' "

Libraries that are loaning out people often refer to them as "human books." Sometimes they even leave off the word "human," and give them catalog numbers.

These human books can go beyond the practical and into the realm of world peace — well, at least neighborhood peace. The Human Library: What's Your Prejudice? is an international program that encourages dialogue between people of different backgrounds and beliefs. "Public librarians have contact with all walks of life," says Amy Greer, who coordinated a Human Library event at the Providence Community Library in Rhode Island. "So we created an application, and we approached people we see every day."

They came up with a collection of 40 human books. Among the stories, says Greer, "Refugee ... woman with a face deformity ... ex-felon." Over 200 people browsed the catalog and checked out books. "Then they would go and sit down with that person for 20 minutes for a one-on-one conversation ... They could renew one time if they wanted, so it could become a 40-minute conversation. And they would just have a dialogue," says Greer.

The Human Library, she says, is just a different way for library patrons to have what could be a transformative experience. Instead of reading stories, they're hearing them from people in their community, firsthand, face to face. The Providence Community Library is planning another Human Library event next year. If it goes as well as the first one, Greer says they'll consider loaning out humans on a regular basis.