Accessibility links
A Postman's 1963 Walk For Justice, Cut Short On An Alabama Road Before the nation's attention turned to the March on Washington, William Moore was making his own pilgrimage for racial equality. He intended to walk from Tennessee to Jackson, Miss., to ask the Mississippi governor to end segregation — but the Baltimore mail carrier never reached his destination.

A Postman's 1963 Walk For Justice, Cut Short On An Alabama Road

A Postman's 1963 Walk For Justice, Cut Short On An Alabama Road 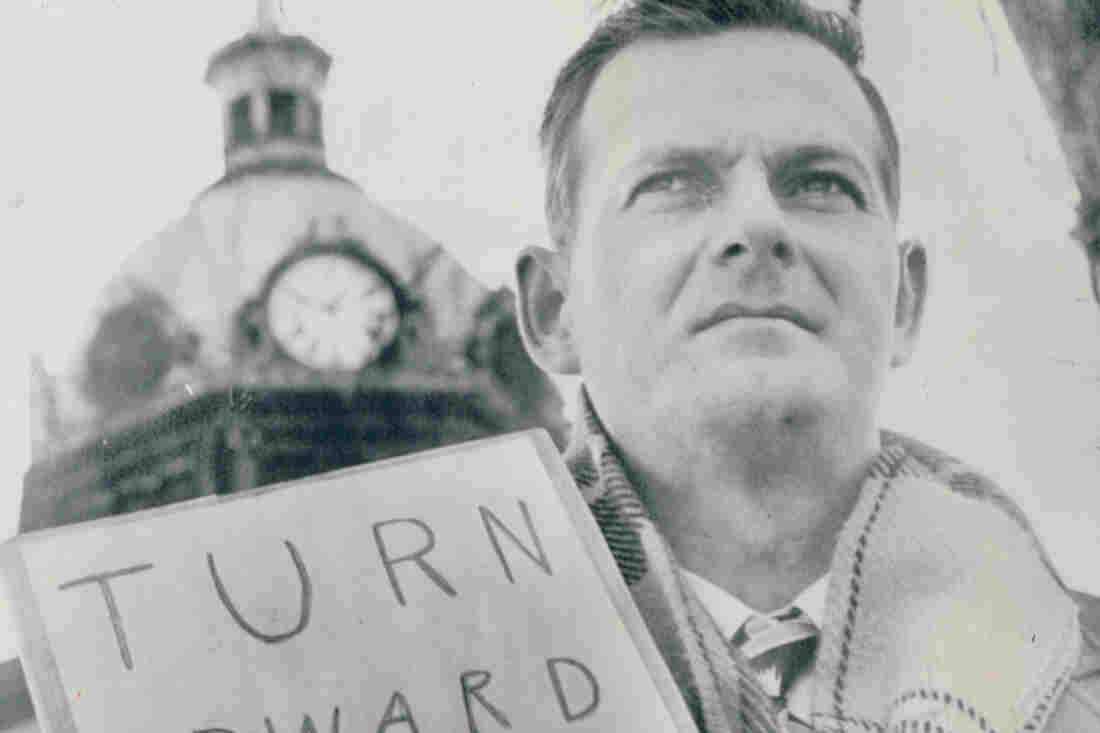 Civil rights activist William Moore made several one-man marches for racial equality. In April 1963, he was killed during a march from Chattanooga, Tenn., to Jackson, Miss. Baltimore Sun hide caption 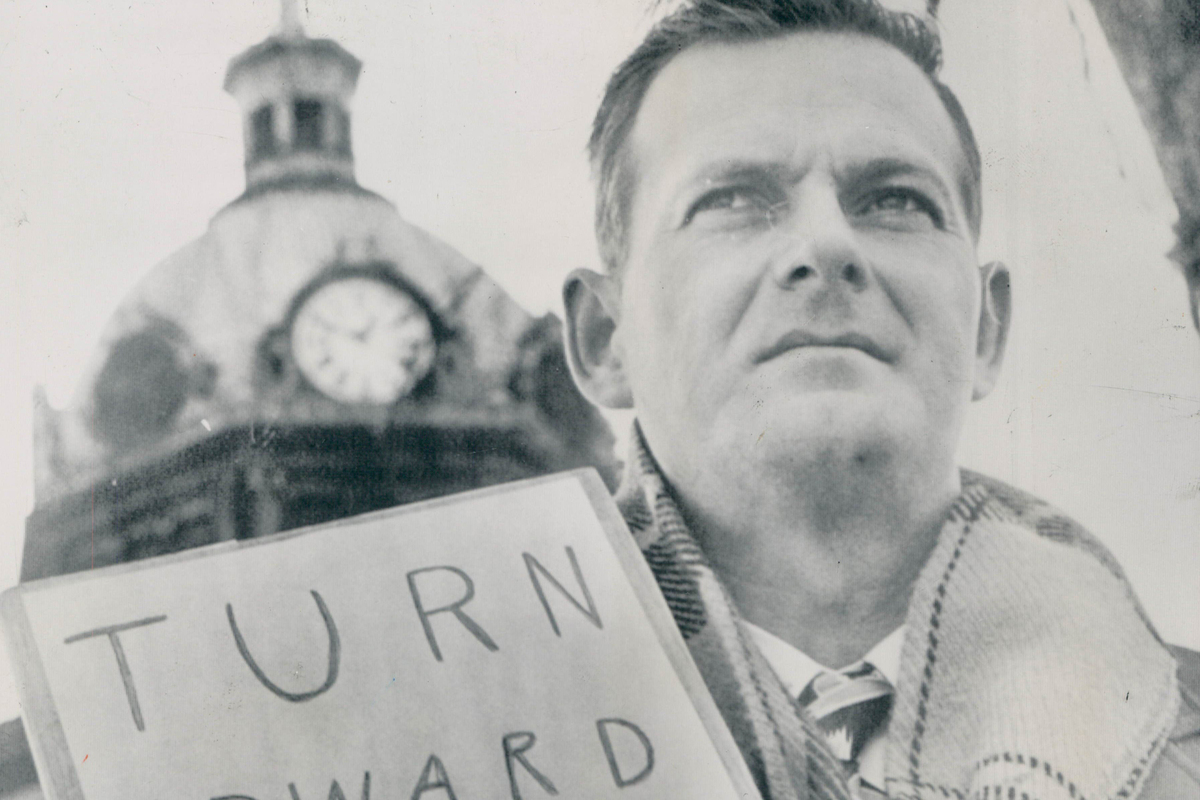 Civil rights activist William Moore made several one-man marches for racial equality. In April 1963, he was killed during a march from Chattanooga, Tenn., to Jackson, Miss.

In April of 1963, a Baltimore mailman set off to deliver the most important letter in his life — one he wrote himself. William Lewis Moore decided to walk along Highway 11 from Chattanooga, Tenn., to Jackson, Miss., hoping to hand-deliver his letter to Gov. Ross Barnett. Moore wanted Barnett to fundamentally change Mississippi's racial hierarchy — something unthinkable for a Southern politician at the time.

In his letter, Moore warned the governor, "Do not go down in infamy as one who fought the democracy for all which you have not the power to prevent." It never reached its destination. Moore was shot on the roadside, a killer never charged.

Through time, Moore's story has been overshadowed by more emblematic moments that gripped the nation that year, like the assassination of civil rights leader Medgar Evers in Jackson, Miss., in May and the deaths of four black girls in the September bombing of the 16th Street Baptist Church in Birmingham, Ala. But while Moore's walk for equality is less well-known, it's an important chapter in the civil rights movement for many. 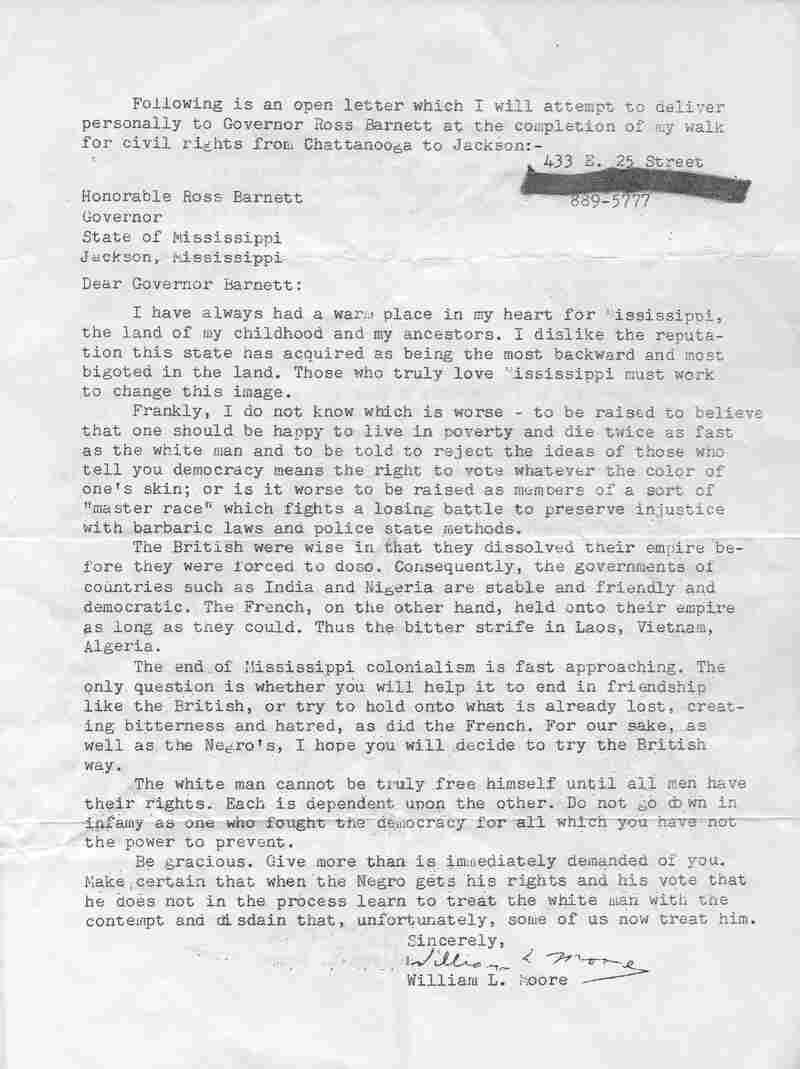 Moore intended to deliver a letter demanding the end of segregation, to Mississippi Gov. Ross Barnett. Click here to read the letter in its entirety. Courtesy of Ellen Johnson hide caption 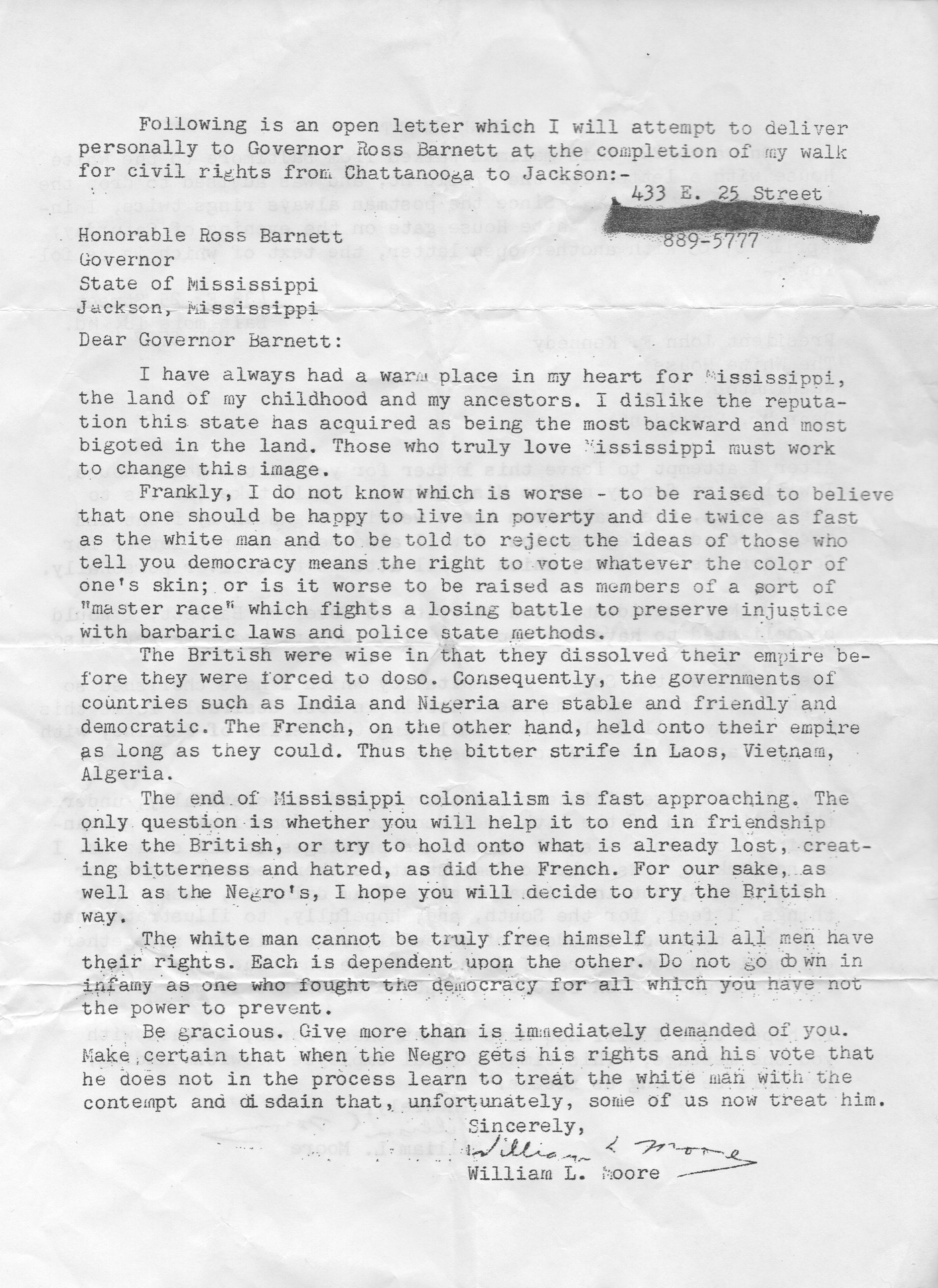 Moore intended to deliver a letter demanding the end of segregation, to Mississippi Gov. Ross Barnett. Click here to read the letter in its entirety.

A Wagon, A Shopping Cart And A Stack Of Letters

William Moore was born in Binghamton, N.Y., but he was not just another "Yankee" sticking his nose where many Southerners believed it didn't belong. Moore had roots in the South. Moore was raised in Russell, Miss., after going to live with his grandparents at the age of 2. As an adult, Moore returned to Binghamton and began organizing demonstrations for civil rights. He also became a member of the Congress of Racial Equality (CORE), a vital arm of activism at the time.

If you drove down Highway 11 five decades ago, you might have spotted a middle-aged white man in rumpled clothes and coiffed hair, sporting a gap-toothed grin. You might have thought little of it and kept driving. But when you glanced back, you would have wondered why this guy was pulling a little red wagon, handing letters to people he passed and pushing a grocery cart plastered with a "Wanted" poster featuring an image of Jesus. William Moore definitely stuck out.

But there were people along his route who did more than wonder about strangers like William Moore. Mary Stanton, author of Freedom Walk, a book about Moore and others who continued his effort after his death, describes people who confronted him. The polite individuals interrogated him about his intentions; the rude threatened him.

Ultimately, Moore was shot twice in the head at point-blank range near Attalla, Ala. He was left on the side of the road at a picnic area approximately 300 miles short of Jackson. In her book, Stanton describes a frightened Willis Elrod, who stumbled over Moore's body when he pulled over to use the restroom.

Floyd Simpson, a Ku Klux Klan member, was suspected of committing the murder but was never charged.

Today, the patch of dirt at that spot along Highway 11 is now only meaningful to those already aware of Moore's story; the stone picnic tables have long since been removed. Before April 23, 1963, they provided rest for travelers. Afterwards, they symbolized America's troubled past. 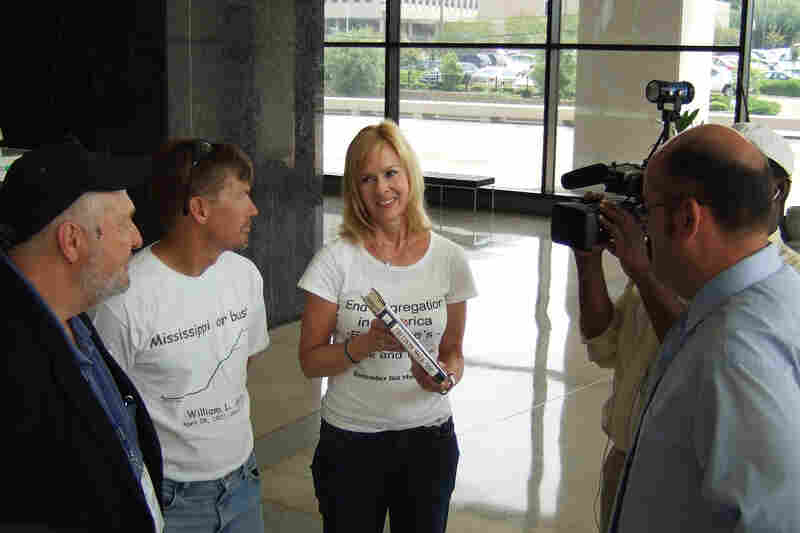 In 2008, Ellen Johnson (center) completed Moore's march, walking from the spot he was killed in Alabama to the Mississippi governor's office in Jackson. Courtesy of Ellen Johnson hide caption 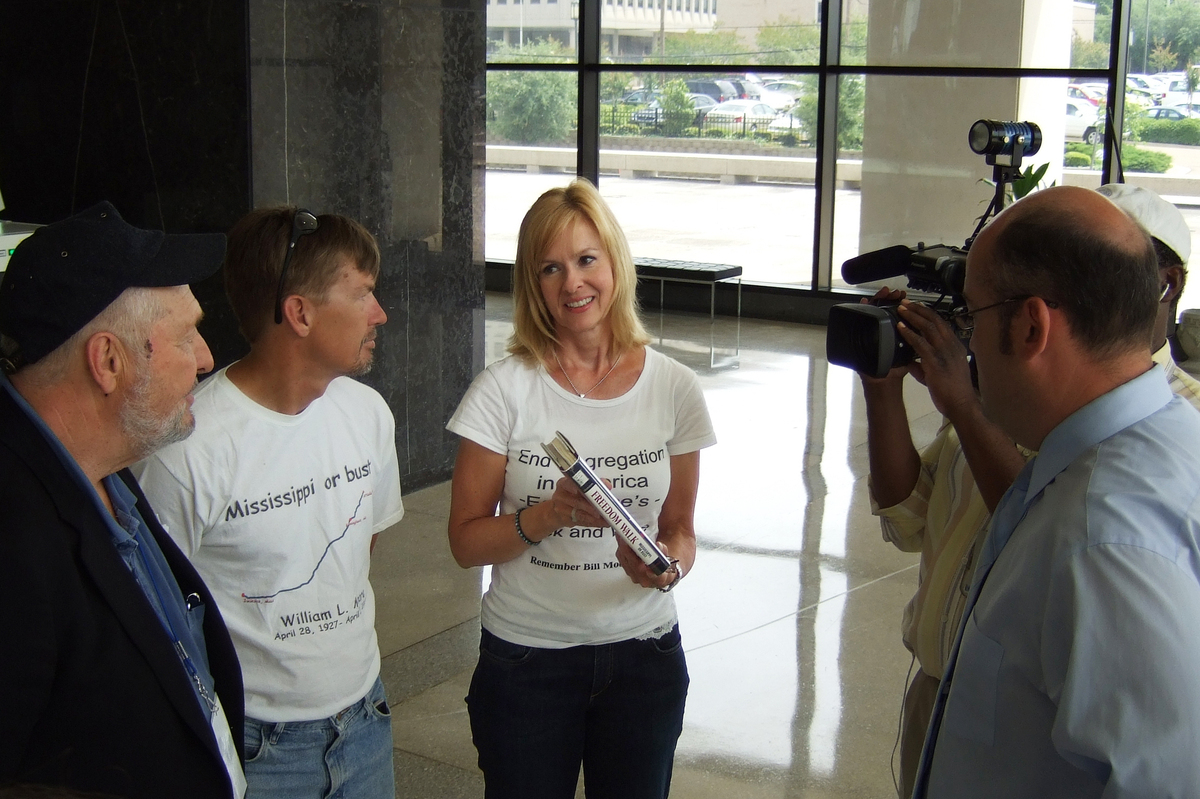 In 2008, Ellen Johnson (center) completed Moore's march, walking from the spot he was killed in Alabama to the Mississippi governor's office in Jackson.

But for some, that spot in Alabama inspired action. Decades after Moore's death, Ellen Johnson of Stanhope, N.J., decided the postman's story could not end at that picnic area. In 2008 she and her friend Ken Loukinen set out to finish what Moore started.

Johnson first learned about Moore's story while watching a film of Madalyn Murray O'Hair, an atheist activist, speaking to a group of law students. It's believed that Moore was an atheist and friend of O'Hair, and that she helped make some of the signs he carried on his walk.

Once Johnson, also an atheist, learned that Moore was killed for his beliefs, she was determined to find and deliver his letter. Johnson located Moore's widow and obtained mimeographed copies that Moore was distributing on his march.

On the 45th anniversary of Moore's death, with copies of his letter in-hand, Johnson, Loukinen and several others started their journey from the spot where Moore's body was found. Johnson says that she noted at the time that not much of Alabama seemed changed since 1963.

"There were some places, mostly Alabama, before we left Alabama, that looked like they hadn't changed in 45 years," Johnson says. "Because it looked like I was seeing what Bill Moore saw."

But unlike Moore's journey 50 years ago, Johnson's walk to Jackson in 2008 garnered mild reactions.

"I think they just wanted to know that we were OK and they moved on," Johnson says of travelers who passed them on the road. "Most people, eh, it was kind of ho-hum."

For Johnson, completing this march was anything but "ho-hum." Johnson says that honoring Moore and others was her ultimate goal. When the marchers arrived at Gov. Haley Barbour's office in 2008, he would not take time to accept the letter. Even so, there was a great sense of accomplishment among the marchers.

Moore's letter still remains undelivered, but Johnson takes pride in completing the postman's walk to Jackson. And though Moore never completed his own march to Mississippi, his values have since been delivered to more zip codes than he could have imagined.